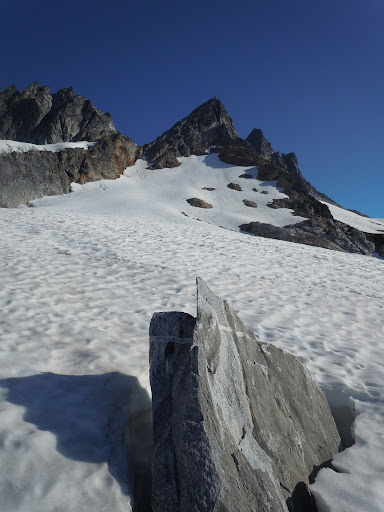 This was my first venture into the Picket Range in the North Cascades. The Pickets are notorious for the burly approaches and challenging, remote peaks. I was really excited to get going but a bit nervous about what to expect.

The original plan for our team of four was to tackle the South Face of Inspiration Peak, a multi-pitch 5.8 rock climb accessed only after crossing a heavily crevassed glacier. I was a bit skeptical of this objective since we were getting such a late start to the approach, but I was just happy to have the opportunity to poke around up there.

On Friday morning we picked up permits in Marblemount and drove to the Goodell Creek climber’s trailhead. We got off to a casual start around noon and began hiking up the trail. The trail followed an old roadbed for about 3.5 miles. It was flat and extremely well-maintained for a climber’s trail. But the pleasantness was immediately over when we reached a large cairn and arrow made of rocks that directed us straight uphill. Over the next few miles, we gained about 6000′ of elevation. 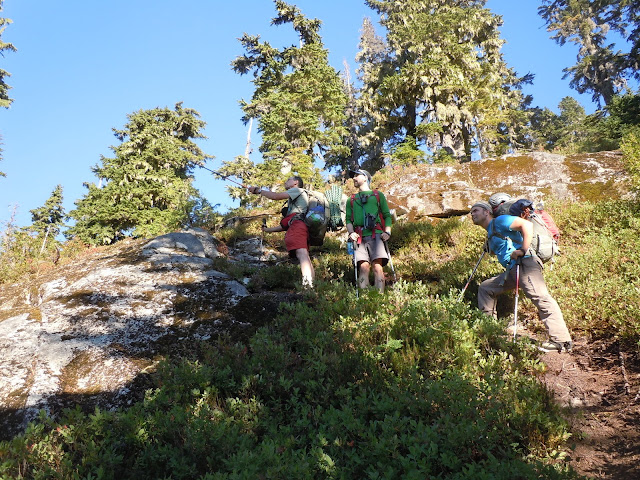 It was hot, and we were working really hard. Eventually we popped out of the forest, traversed along some cute heather meadows and then continued up some more. I was happy to find ripe huckleberries along much of the approach. They were like miniature morale-boosters.

The sky was growing dim and we were still nowhere near our camp. We finally approached the saddle that we’d cross to drop into Terror Basin. On the other side was a steep slope and a snow gully with a moat near loose rock and vertical dirt. I assumed we’d have to descend the moat, so without delay I began downclimbing. It was really crappy and loose but with the snow directly to the side it felt less exposed than downclimbing the slab. At the bottom, however, the loose stuff continued and the snow went away. We all made it down this treacherous nastiness without incident, and hightailed it across more snow and rock to find a camp. Just as the sun went down we settled in near a big boulder with a flat, sandy sleeping spot. 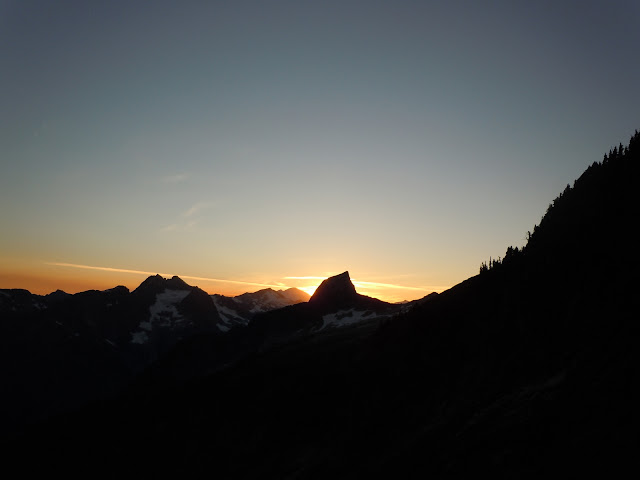 In the morning, our team dropped from four to three as one person opted for a rest day. Again, we were off to a late start. I knew Inspiration was out of the question. An hour of walking brought us to the camp we’d hoped to reach last night. Another hour brought us to the foot of the glacier. It was heavily cracked up and it would take some skillful navigating to find a direct and safe route to the rock. Then, there were several hours of climbing left on territory that was new to all of us. 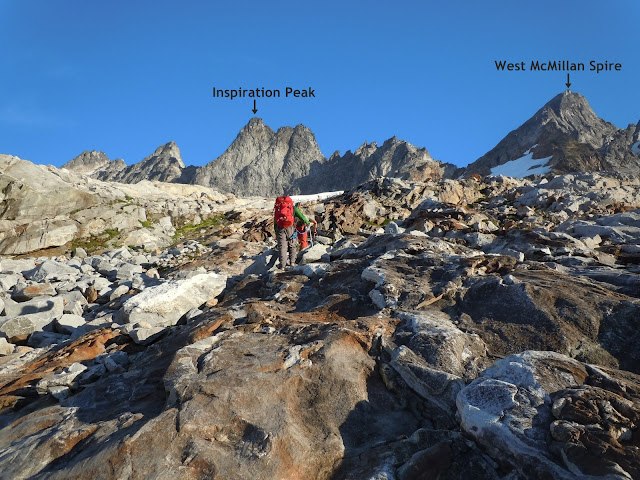 I asked if there was an alternate peak we could get up from here. Glenn suggested the west ridge of West McMillan Spire, a third-class scramble. We could clearly see the gently sloping ridge from where we stood. it looked totally doable, so we changed our itinerary and set out towards the spire.

The glacier crossing here was very moderately sloped and crevasse-free. We took our sweet time ascending the snow, stopping every so often to look around at the awesome scenery and to guzzle down some water. It was murderously hot! The air was almost perfectly still and the sun was blazing. 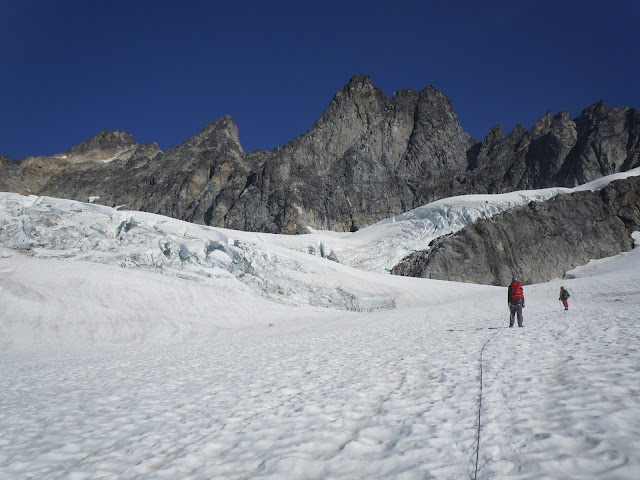 We stopped short on the glacier, avoiding the steep snow finger that led to the base of the west ridge. Instead we angled onto some rock and decided to “lead” a couple of pitches to get some use out of all the rock gear we’d hauled up here. We stashed most everything else, including 2 packs and all the snow gear here. Then I started up a vertical-ish slab and placed a couple of pieces for the hell of it as I quickly scrambled up easier and easier rock. I belayed my partners up and Glenn wandered further to pick out another crappy vertical section and we got some simul-climbing practice in. Yeah, not for me. Now I know. 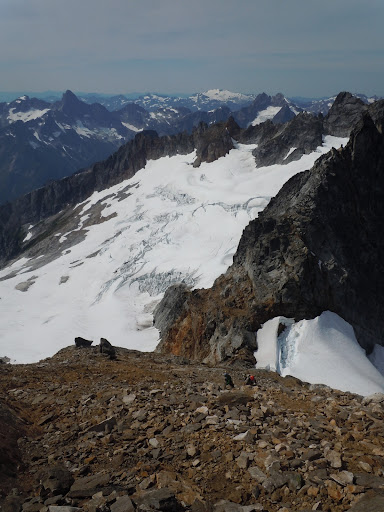 Once we put all our toys away we each chose our own adventures up the mellow west ridge. I went for the more solid, vertical sections since they were short and fun and not that exposed. The guys seemed to prefer the loose talus and scree for whatever reason. Either way, we all made it up to the false summit and then completed the final traverse to the small summit block. The views up here were hard to beat. The mountain dropped away steeply in all directions. We had amazing views of the Picket Range and beyond. Glacier Peak, Mt Baker, Mt Shuksan and the Liberty Bell Group all stood proudly among the glaciers and spires. I could see no evidence of human civilization in all 360 degrees around me. It was spectacular. 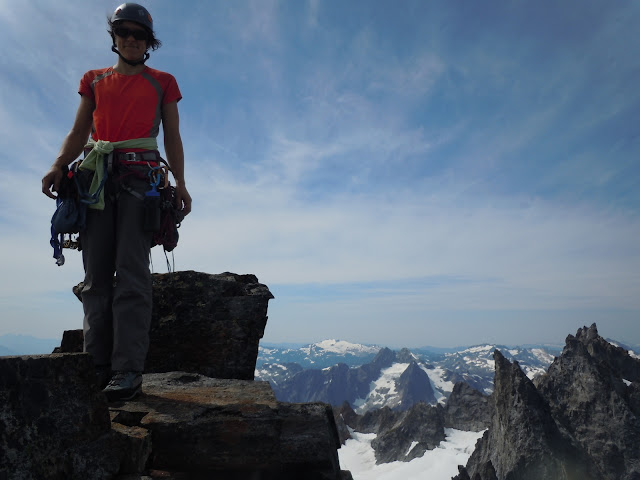 Descending the ridge was mostly easy. We had to avoid the steep stuff near the bottom that we’d simulclimbed up. Instead we took a loose, exposed gully back down to a point where we could see our packs. Here Glenn veered off across ball-bearing covered slab to another loose gully where he was cornered in a moat. Brad and I chose the awesome slab on the other side and got down pretty easily. It was amusing to watch Glenn in action as he self-belayed with a nut tool over the narrow but deep snow moat.

We walked back down the glacier, staying to the left this time, to avoid crossing the waterfalls and having to downclimb the steep, polished slabs we came up. From there, it was a mostly straightforward snow and slab traverse back to camp. By now I was pretty worn down and was really looking forward to taking off my boots and settling down in camp. Even though we just did an easy scramble, it was still an 11-hour day.

Dan was looking rested and spry as he had a nice, mellow day hanging around the beautiful camp area. No one else had been down in the basin since we’d arrived. We all ate dinner and watched the sun set, then happily headed off to sleep. 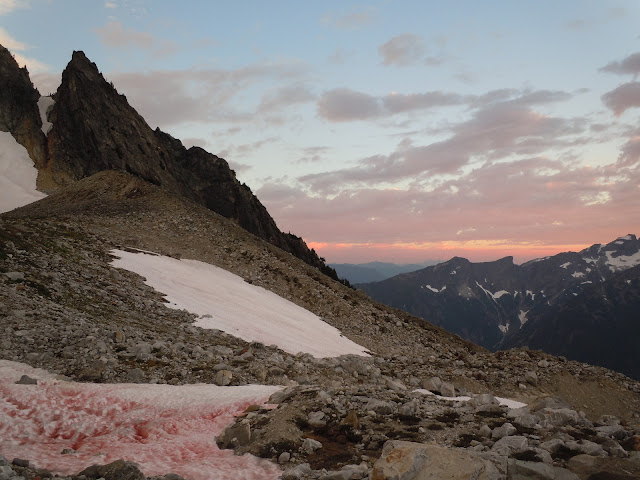 The next morning, I awoke in a hanging mist and couldn’t see a thing from camp. We were totally socked in with clouds. That was going to make for a super fun day. 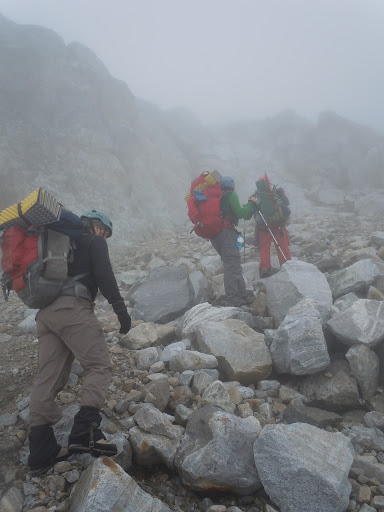 Another lazy start (arg!) this morning meant it was also going to be a long day. We were all dreading the awful moat we’d had to descend from the saddle to enter the basin and had been strategizing alternate routes for the way out. We left camp at 7:45 am and trudged up the snow to the more solid-looking rock beneath the moat to our right. It looked mostly easy and straightforward, but it was steep and exposed and we’d had our heavy packs on. We ended up protecting two pitches–one on the slabs beneath the moat and the moat itself. This was the smart thing to do, but it did cost us a couple of hours. At 9:45 we were finally up and over the saddle and began the long walk out.

We wandered through the clouds, following trails worn through the heather and cairns marking the rock as we slowly began the long, traversing descent. But the mood changed rather quickly when the real descent began. Just as surely as the trail shot straight up a couple of days ago, it dropped straight down in a hurry. This was the most heinous descent I’d ever done. my quads and knees were screaming for mercy. My feet weren’t faring any better. There was no relief along the way, it was just all down all at once. I relished every tiny bump that led uphill as opportunities to give my poor muscles a rest. 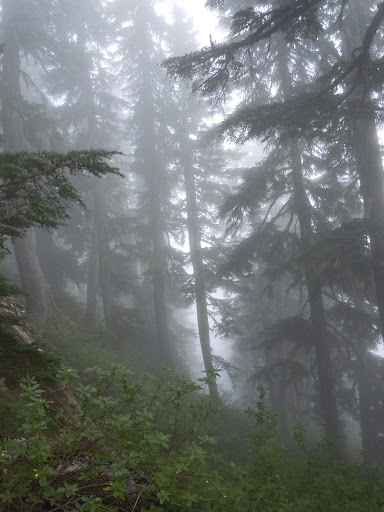 But all was well as we dropped down the final bit of trail to the old forest road. From here, walking would be a breeze. I kept my internal radio station on mindless, mellow songs as we cruised all the way back to the car. By 3 pm we were done.

This was arguably the most challenging trip in recent memory for me. What surprised me the most was that my muscles didn’t feel completely spent the next day. I guess that means I could have pushed harder. And THAT means I will be back in the Pickets again soon.