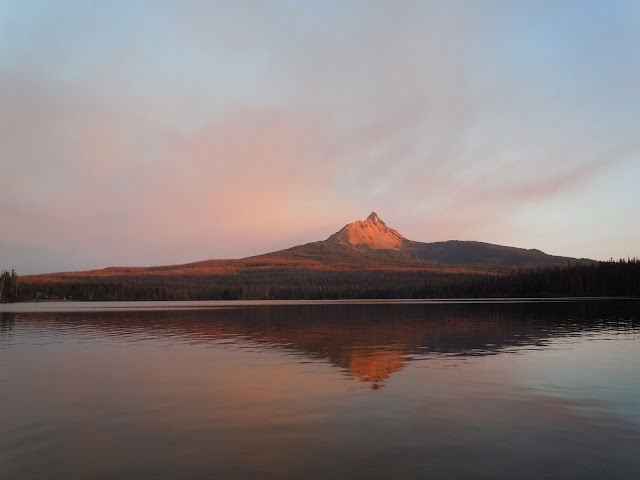 After a peaceful evening at the Big Lake campground listening to our neighbors’ blaring country and rap music mix, we were ready for a dark-thirty start of a Mt. Washington climb.

Somehow Lee got me roped into a West Ridge climb as part of a 5-person team. Most (sane) people climb Mt. Washington via the North Ridge. While it is as dirty and loose as the best Oregon rock, the North Ridge is do-able by beginner climbers with a competent leader. The West Ridge is pretty much never climbed by anyone of any ability. It was our task to find out why.

We left the campground at 5 am and started walking before 5:30. It was pitch black and the light of my feeble headlamp was hardly enough for me to move forward without stumbling. We reached the North Ridge climber’s trail before sunrise, and started making our way up the mountain. The trail was fairly braided and faint in some places. We wandered up to a viewpoint on the North Ridge to take a gander at our distant objective. There didn’t seem to be any great way to get over there without traversing the rocks pouring down the west side of the mountain. Eventually we crossed over the North Ridge and descended to the base of the talus. Then, we began the arduous task of walking horizontally across the shifting field of rocks. Our intention was to stay close to the treed areas, in an effort to walk on the most stable slope. However, there were huge gaps between the vegetation and so there was no avoiding the loose terrain. 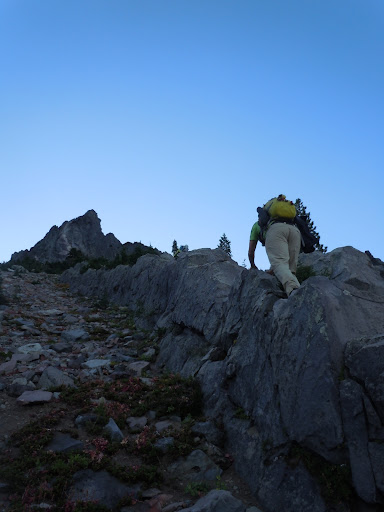 At the other end of the scree and talus field, we turned up the slope, following a thin fin of rock. The rock was semi-solid, but covered with ball-bearings, er, pebbles in places. The slope steepened, and we grabbed on to any little tree or rock we could to make upward progress. At the top of this rock and tree section we reached the portion of the West Ridge where we would start our climb. 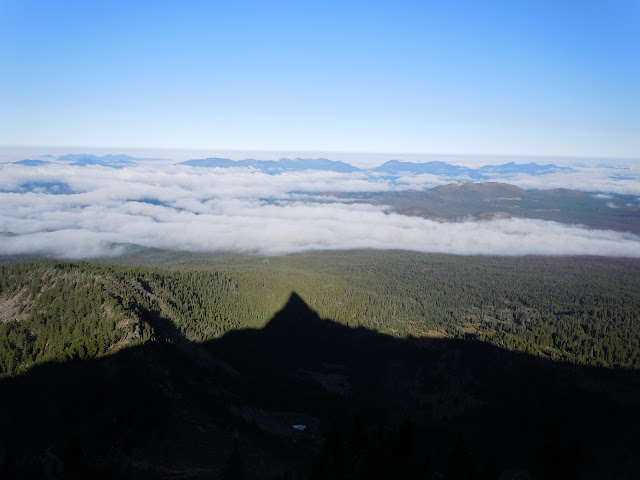 The sun was hiding behind the mountain and the wind was gently beginning to pick up. We searched for a place to build a belay anchor. Most of the rock was loosely adhered together, so it was useless to try to place rock protection in it. Chris eventually found a large boulder with some cracks in it that we could throw a few cams in. Now we were ready to go. 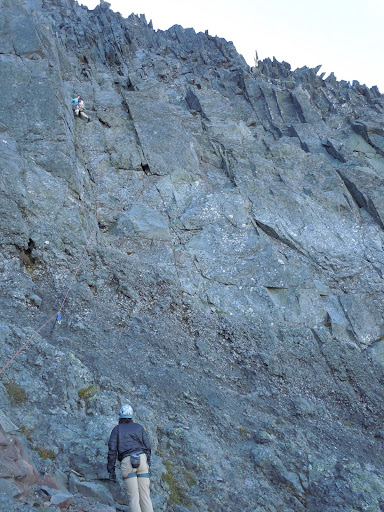 Or so we thought. It took two people and nearly two hours to get a body to the top of pitch one. It was frighteningly loose. Two more people followed on a single rope and the last two team members followed simultaneously on a pair of half ropes. Time had somehow drifted into the early afternoon so now it would be a race to ensure we could top out and get off the technical stuff before the sun set.

We pitched out the rest of the route based on rope drag and the location of the most solid rock. Above pitch one we tried to skirt the “Cascade Dinner Plates” as best as we could. The dinner plates were flattened rocks that stacked up in vertical piles and sent waves of fear and panic to all who touched them. We all gingerly climbed on and around them, trying desperately not to dislodge any of the rock. Doing so would cause the climber to fall or the belayer to get beaned on some really useful and sentimental body part. 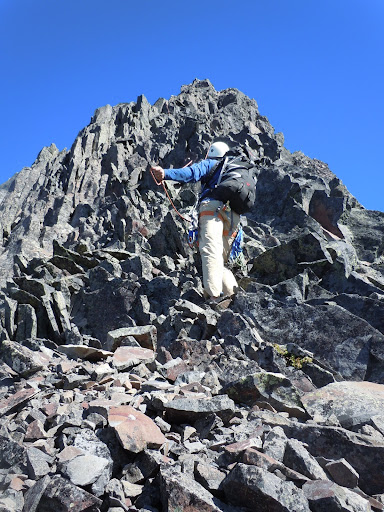 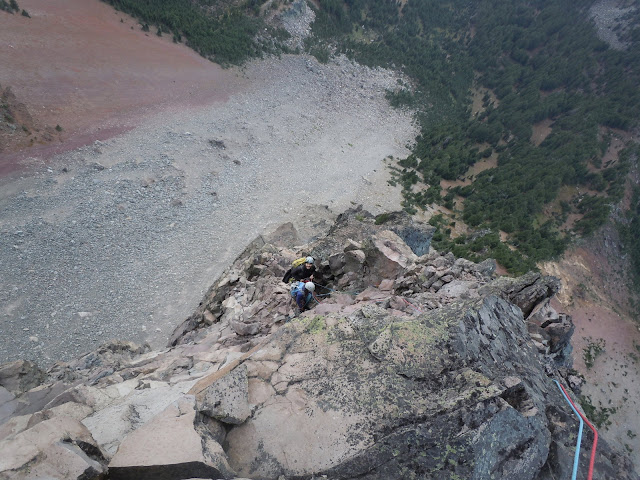 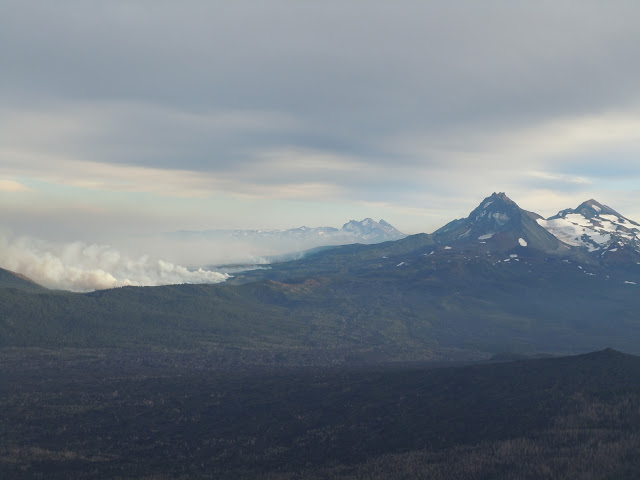 The exposure on the route was really awesome in some places. It was a long way down to the base of the mountain. Although the sun was shining for most of the climb, the wind was blowing and we all climbed the route in our puffy coats. As the day drew to a close, the wind picked up even more and a sheet of ominous, gray clouds poured in. All the while we found amazing views of the raging Pole Creek Fire to the southeast. 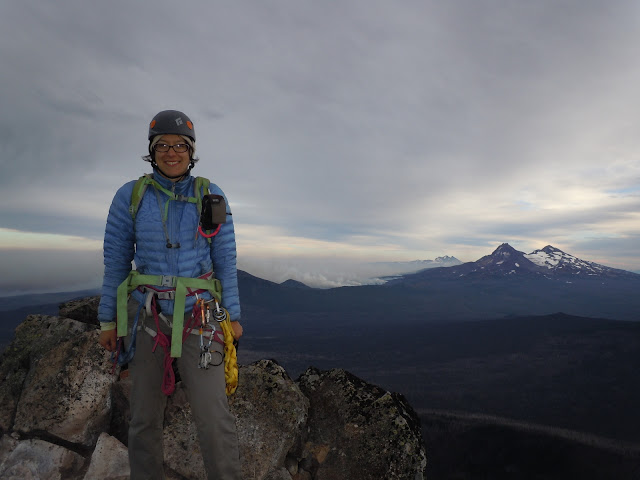 It took 6 or 7 pitches of climbing, but we all reached the summit after 5pm and were ready to rappel by 6. The sky grew grayer by the second and we knew we needed to move. We had 5 people, 3 ropes, and 4 rappels to make. We managed to get everybody down in about an hour. We were cruising now. 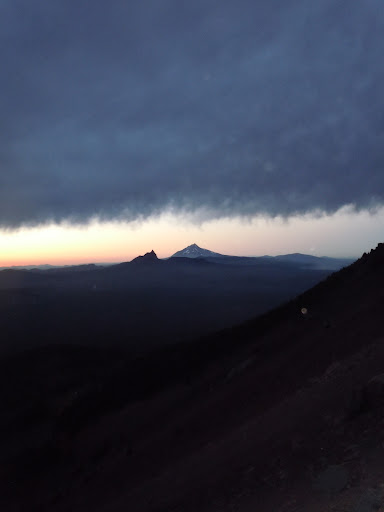 There was just one tricky section on the mountain left to negotiate, then it would be smooth sailing from there. The slope at the base of the rappel was steep and screelicious. The easier sections had a deep enough layer of scree for plunge-stepping. The harder sections had hard rock beneath a thin layer of pebbles and dust. I made it down with a combination of techniques, including the graceful and technical butt-slide. In the fading daylight, I could barely make out the climbers descent trail that would take us back to the forest. Around 7:30pm it was time to get the headlamps back out and begin the two hour walk back to the cars.

The day ended about 16 hours after it began. I was feeling pretty wiped out, but content that we’d had a successful climb. The team was solid and fun to be around. Everyone worked together well and made good decisions. The weather, albeit cold at times, held out for us. We didn’t get the thunderstorms that could have made for a very bad day. No one got injured, even on the incredibly awful rock.

This is a route best left to the history books, not to be repeated again. Maybe in a few hundred or thousand years, when all the loose rock is gone and a gorgeous, airtight, knife-edge ridge remains, it would shape up to be a worthy climbing route. Until then, set your sights on something, anything, else.