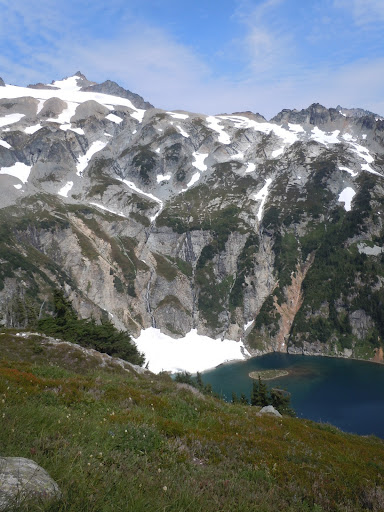 With my Forbidden Peak climb plans falling through, I quickly made plans with Lee to take his son up Sahale. We left Portland early Saturday morning to pick up permits at the Marblemount Ranger Station for the next two nights. Luckily, permits were available since we hadn’t come up with a backup plan.

After killing a day chasing bunnies and trying the various eating establishments in Marblemount, we drove to the end of Cascade River Road and prepared for a long day of hiking. We had an 8-year old with us and I had no idea how that was going to go. I assumed the worst.

The hike began on the trail to Cascade Pass, which was extremely well graded, with the most switchbacks I have ever seen. Nonetheless, about 5 minutes of walking passed before the little guy wanted to sit down and take a break. So, it was going to be like this…

Lee was good about setting short goals, like we’ll take a break after X switchbacks, but there was still an awful lot of resting and not a lot of walking. I was hoping to at least be able to hunt for huckleberries as we plodded along, but as this was a very popular trail, the berries were mostly picked over. I got a few, but quickly lost interest in looking. 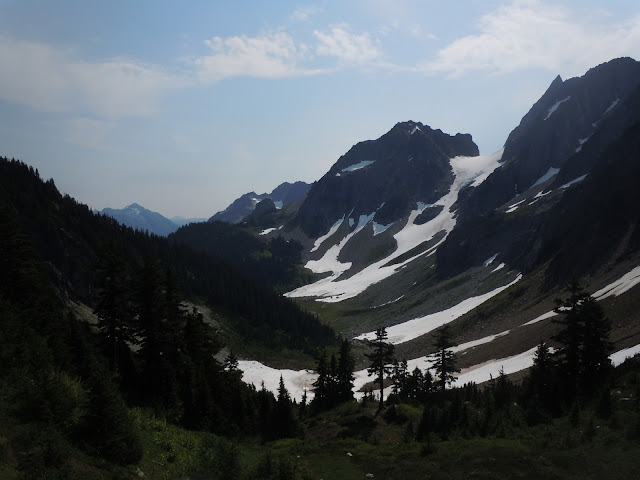 Hours later we made it to Cascade Pass and took a lunch break. The views were breathtaking from here. A huge, wide valley opened up in front of us and throngs of hikers came and went across the trail. Once we left the pass, the trail switchbacked a bit steeper now. Up on Sahale Arm, the grade dropped and the views became more enthralling. We walked through green meadows dotted with patches of wildflowers. Dramatic, craggy peaks rose up from the valley on all sides. I could recognize Eldorado, Forbidden, and Johannesburg, and the others were too numerous to count. It was here that I broke away from the other two (sorry…) and blasted away towards camp.

The end of the trail rose sharply up a loose talus field to the camp, which was perched atop a gravelly moraine. A hiker we passed earlier recommended the camp on the second of three domes, so I chose that one for us. I unpacked, ate some food, drank lots of water, and took some pictures. It felt so good to have that heavy pack off my back and Crocs on my feet. 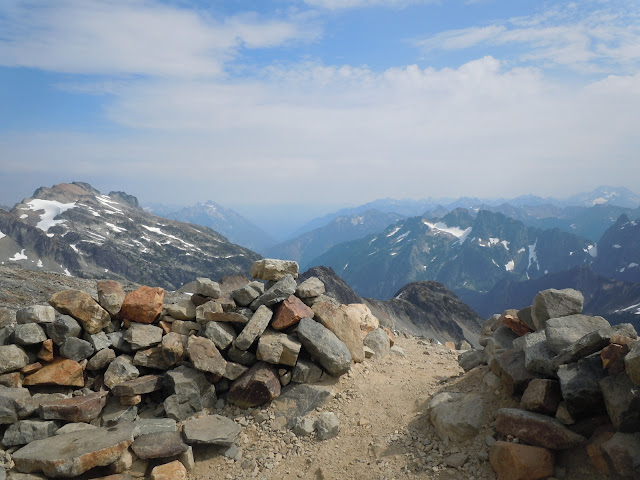 45 minutes later, the boys rolled into camp and G was instantly bored. I was flabbergasted. I will spare the details of the hours whiled away at camp.

The sunset was spectacular. Pink clouds decorated a dimming sky and the moon rose over the snow-capped peaks. I took a walk to the composting toilet, which was right out in the open on the ridge to camp. Using the loo was not for the shy camper. I was tempted to linger there, as the views were particularly gorgeous. 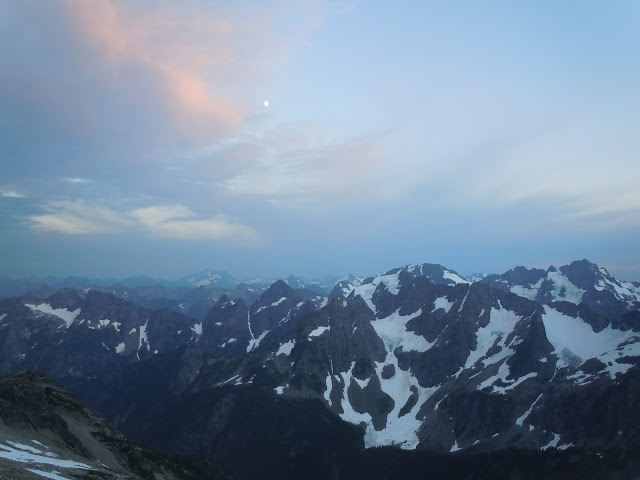 The next morning, we awoke to clear skies and a cool breeze. It was going to be a great day. We motivated to get breakfast going quickly and start climbing the mountain. It would take some time to gear up at each of the switchovers, so the more time we had, the better.

A short jaunt from the camp brought us to the base of the glacier, where we put on crampons and roped up. I would head the team with Lee on the other end and his son just about 10 feet away from him on the middle of the rope. I thought that would put me out of earshot, but I got to deal with being ordered around by an 8-year old screaming to “slow down” or “speed up,” depending on what he felt like doing. Actually, this is not much different from roping up with adults; being on a roped snow climb is obnoxious unless you have a really killer team of climbers who are all on the same page. 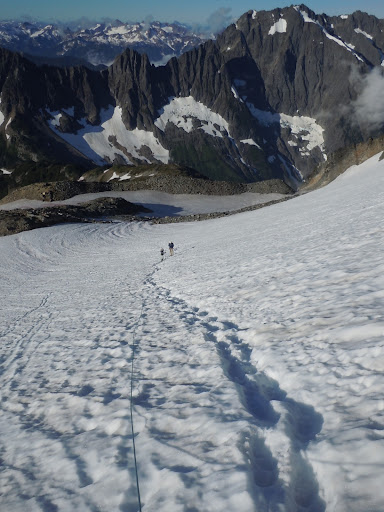 The glacier was mellow and short. Soon we were taking off our crampons to ascend a rocky pile to the base of the summit block. This also took some time, as the rocks were loose and I didn’t take the time to coil the rope nicely so I was dealing with a mangled rope butterfly held over one shoulder. We didn’t know exactly where the climb started and Lee mistakenly sent me, the worst routefinder in the universe, to scope it out. I stopped basically where I didn’t feel comfy scrambling without a belay and built an anchor there. I led up and over a rocky corner just a short ways until I found a rock slung with a red piece of webbing. I belayed them up and led a second pitch. This time I found a legitimate route on solid rock with good gear placements. I also found a sweet fist crack that had some webbing inside it, which I clipped and climbed over.

The summit area was small, but there was more webbing there so I quickly got safe and put the dudes on belay. It was windy and cold up there, so I hunkered down and appreciated bringing the BD guide to make the belaying chore a bit more bearable. 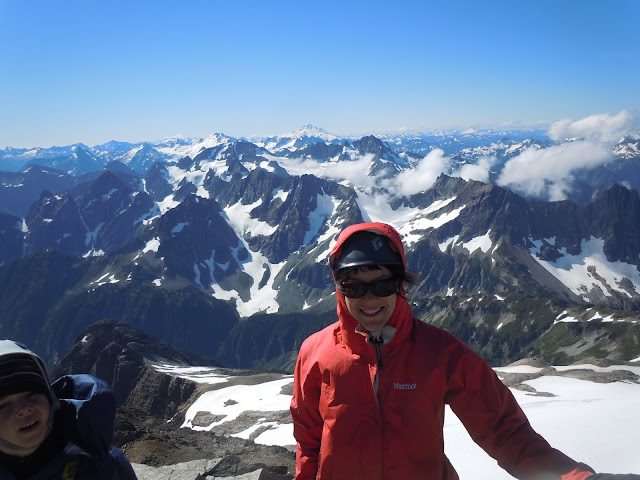 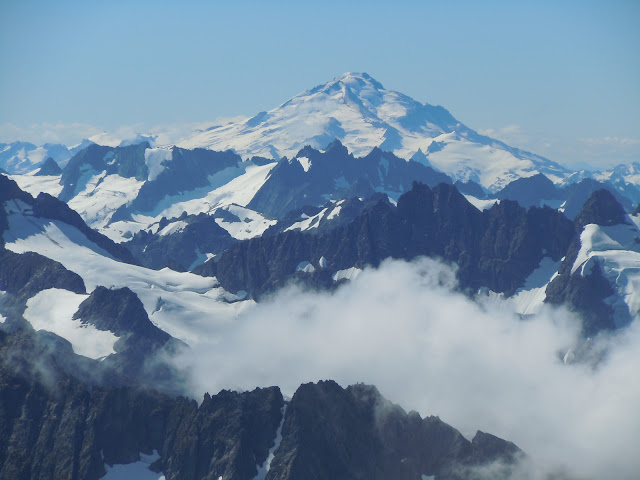 With the 50 m rope, two raps brought us down to safe terrain and we hiked back to the snow from there. Crampons on, ropes on. This time I took the tail end of the rope as the kiddo and his dad led out. This was perfect. I kept enough rope in my hand as a buffer to allow me to walk at a reasonable pace and I may have let the rope pile up a bit on my end in places. There were a few big cracks in the glacier but our route was well away from them and so we were in a very safe situation. We made it back to camp around 1pm, in time for lunch.

The plan was to hike out and drive home today, so lunch was casual as we packed up and prepared to leave. Still, it was over an hour before we took off. The area was so beautiful I hardly cared. I took this opportunity to look around and enjoy the scenery. We even spotted a bear grazing in the meadows beneath the trail. Cool! But, walking behind an 8-year old was taking its toll on me. Rushing forward, then stopping every 10 seconds for no apparent reason, taking snack breaks at least 4 times an hour, and making funny noises just pushed every button I had. I jumped ahead of the crew once we got to the edge of the Sahale Arm and waited for them at Cascade Pass. There I chatted with some other hikers and tried to stomp on a critter scoping the area for dropped crumbs. We stuck together through the rocky section just beyond the pass, but as soon as it was time to stop AGAIN I made a break for it and finished the trip down on my own. 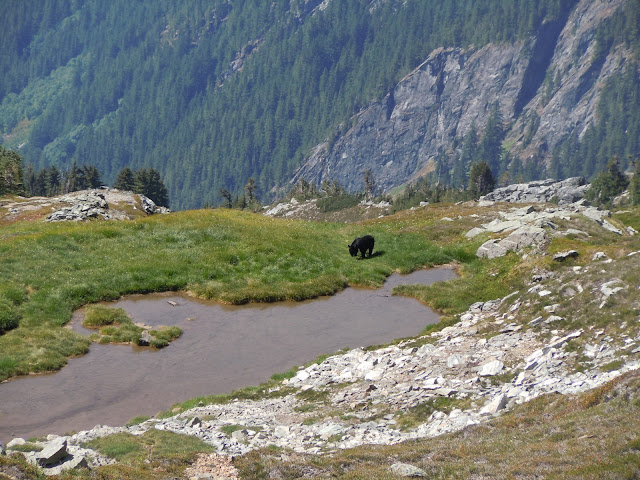 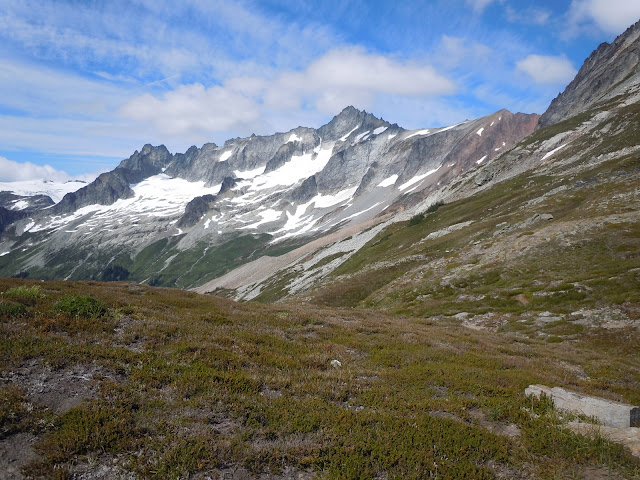 It was nice to have some space to breathe and get lost in my own thoughts. As I turned one switchback after another, I drew little images in the dirt to amuse the child who was hopefully following close behind. I hoped that it would break up some of the monotony for him. It’s hard enough for big people do climb mountains; I could only imagine that it would feel like a huge undertaking for a child.

Overall, Sahale is big bang for the buck climbing. It’s mostly a hike, with a little bit of mild snow climbing and a short rock climb. Incredible views make this a five star trip. Go during the week for the best chance to get a permit or make it a day climb to avoid the permitting hassle.