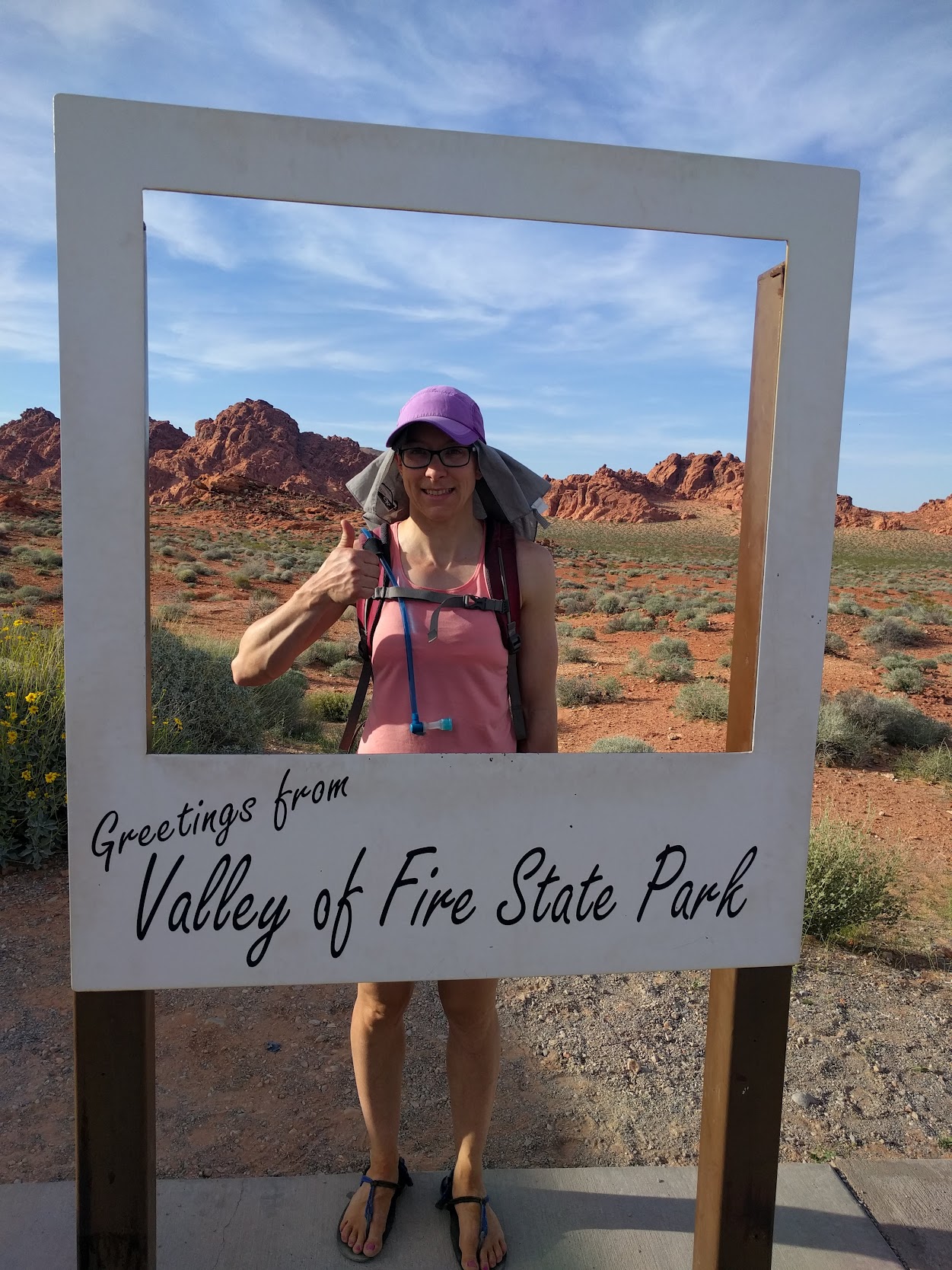 We rolled into Valley of Fire State Park around 9 am. Immediately we were sitting in line, waiting to pay the entry fee to get into the park. To be fair, it was Easter weekend, which is apparently one of the most popular weekends in the park. Our first objective was grabbing a campsite and dropping our stuff so we could go out hiking for the day without wondering where we’d spend the night.

We drove through Arch Rock Campground and secured a site. Then we drove up White Domes Road to check out several short hikes. A quick stop at the Visitor’s Center was less helpful than I’d imagined. There was no map to buy (they were out!) and the ranger seemed pretty uninterested in making hike recommendations. I took a bunch of pictures of the posted hiking map and we went on our way.

First stop: Mouse’s Tank. There was a raging party going on across the street at a picnic area, with tons of people, radio blaring, kids yelling… We were glad to hit the trail and disappear around a corner back into quiet. 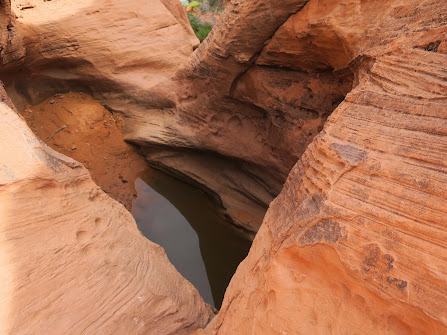 The hike was lovely, following a gentle wash. There were pictographs on the vertical rock walls along the trail. At the end, we reached Mouse’s Tank, a pool of water that allegedly kept a Paiute nicknamed “Mouse” alive while he was hiding from the law. There wasn’t a great viewpoint of the tank itself. We even scrambled up the rock above it to see if we could get a better look. Nope.

This short walk was a good way to get acclimated to the desert weather and get up close to the red rock walls.

Next up: Rainbow Vista. This was another short hike that led to a canyon overlook. There were lots of pretty cacti and rocks, but what I most enjoyed was seeing the chuckwallas!

I’d been itching to see a chuckwalla in the wild ever since our trip to Death Valley several years ago. Aaron spotted the first one. It was sunning itself on a rock. Then, he found another one on the same rock formation. And another. They had staked out this rock as a cozy chuckwalla condo. There was even a sentry sitting at the very top! We watched these cool creatures for a while before continuing along the route.

The rock here was all different colors: red, yellow, white. At the end, there was a pretty viewpoint. And if we’d had the time maybe we would have scrambled down into the canyon to explore. But there was one other trail head on my agenda.

White Domes Loop and beyond

By the time we made it to the White Domes trail head it was about lunchtime. It was pushing 90 degrees and I was feeling pretty low energy. We made up a lunch and found some shade to sit and eat. There were people milling around everywhere. But I had a plan.

The White Domes Loop, a popular, mile-long hike, connected to a trail that the ranger recommended: Prospect Trail. We walked the east side of the loop, past an old movie set and into a slot canyon. Then we kept our eyes peeled for a sign. When we found it, we were delighted at what it said: 5.5 miles to main road, not maintained or marked. PERFECT. 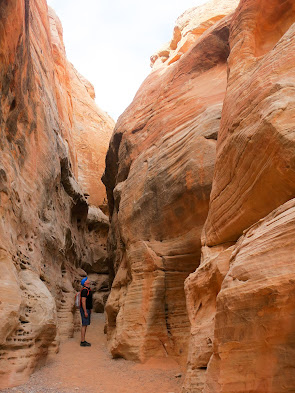 We wandered down a wash, through another mini-slot and then into the open. The trail on the map looked like it followed the canyon, so we tried to stay roughly on route. But it was so tempting to explore.

It was very hot, and shade was at a premium, so we didn’t make it too far back there. But we had enough time to do some hiking in the wash, up on the slickrock and into some nooks and crannies. We saw one other couple hiding out in the shade, but that’s pretty much it. The views were incredible. There were so many rock colors; colors I’d never seen before. No people, no noise, just the rocks and lizards and big blue skies. 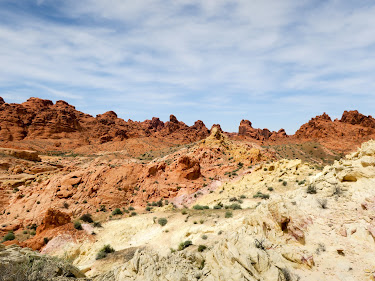 On our way back we saw some flagging and decided to follow it to the White Domes Loop. This route was far more tedious than the route we had chosen but we stuck with it anyways. Once on the trail we walked quickly from one shady spot to the next, admiring the various types and colors of rock along the way. It sure was a stunning location and no wonder this trail was so popular.

On our way back to camp we stopped back in the visitor’s center, which had run out of cold drinks (of course) so we just wandered around in the A/C until our body temperatures dropped back to normal. Before calling it a night we made two more stops: Petrified Log and Elephant Rock. Neither were that spectacular, or maybe that was the heat stroke talking. We passed by a mother who was encouraging her two sons to climb on Elephant Rock so she could take a picture. And to my utter amazement, one of the boys pointed to the sign that said “please do not climb on rock” and said he wasn’t comfortable doing that. BRAVO, KID!

Back at camp, we got ourselves all set up and prepared to cook dinner. In the meantime, a band of kids kept running back and forth through our campsite to climb on the rocks behind us. And their parents were doing the same. For the rest of the night we got to listen to one of the obnoxious dads howling like a wolf, followed by the chorus of kids howling back from all over the camping area. Father of the year. It would have been an absolutely beautiful place to camp if not for that one group of inconsiderate people. The rest of the camp was pretty quiet.

I was determined not to camp in a developed site anytime soon after that experience. There’s always one person who ruins it for everyone else…