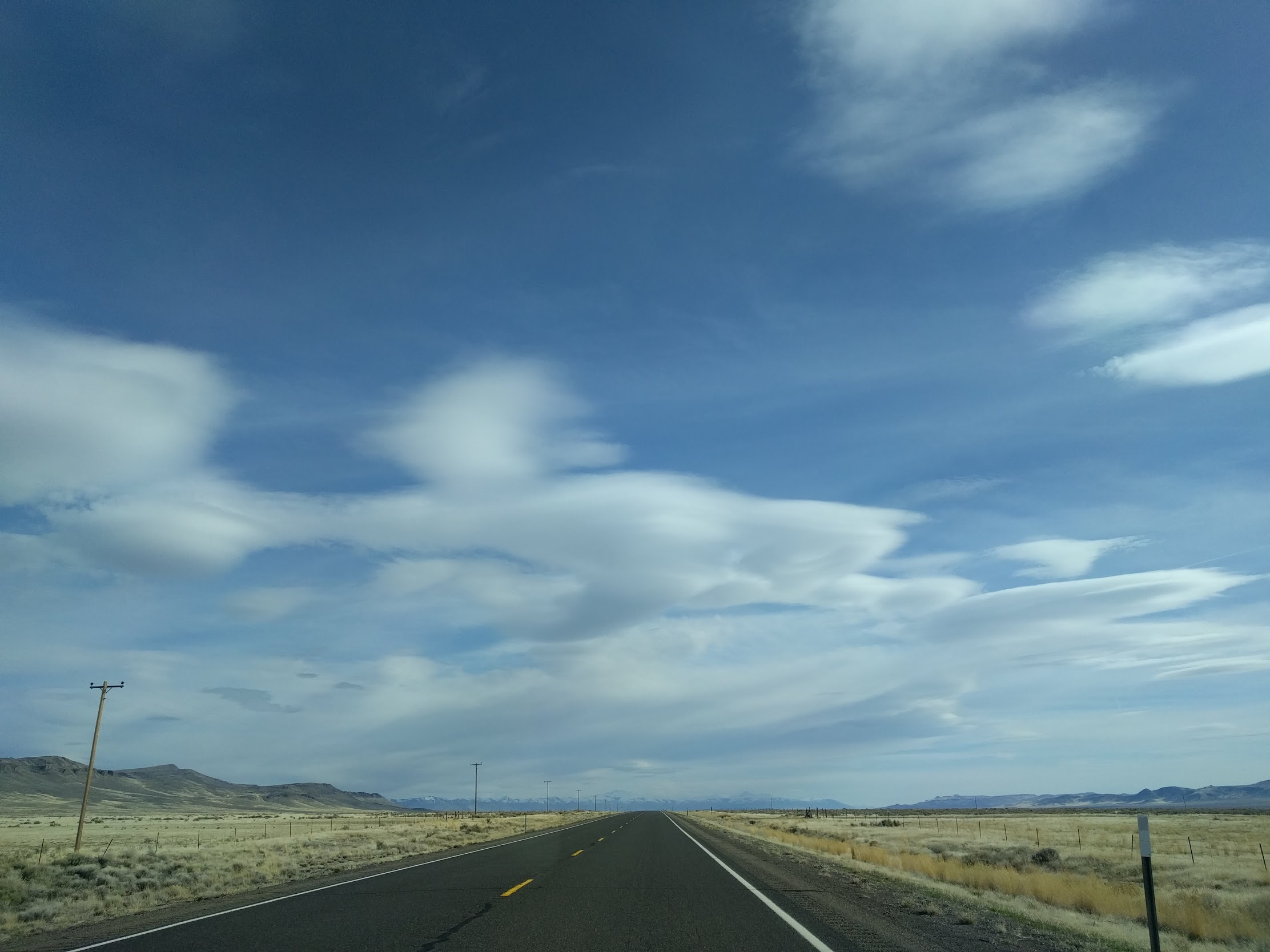 I was itching to get on a road trip. When the day finally came, I felt like a racehorse at the gate. We packed up the car and started driving towards Nevada. That stretch of highway between Bend and Burns is usually pretty monochromatic and boring. But today there was a surprise. Bald eagles, maybe thirty or more, just hanging out in a field near the road. They were perched on the irrigation equipment, soaring around, sitting in the grass. It was really strange. Then, a herd of pronghorn. The wildlife sightings kept me engaged as we headed out of town.

Day one was strictly driving. We got to Winemucca around dinner time and found a city park where we could assemble some dinner food and stretch our legs. One last burst of driving took us to Mill Creek Campground, where I’d planned on staying the night. But a sign at the gate said the campground was closed due to wildfire damage. Someone was camped in an RV near the gate. So we decided to drive further back on the gravel road to find our own space. There we camped under a full moon and lots of stars. 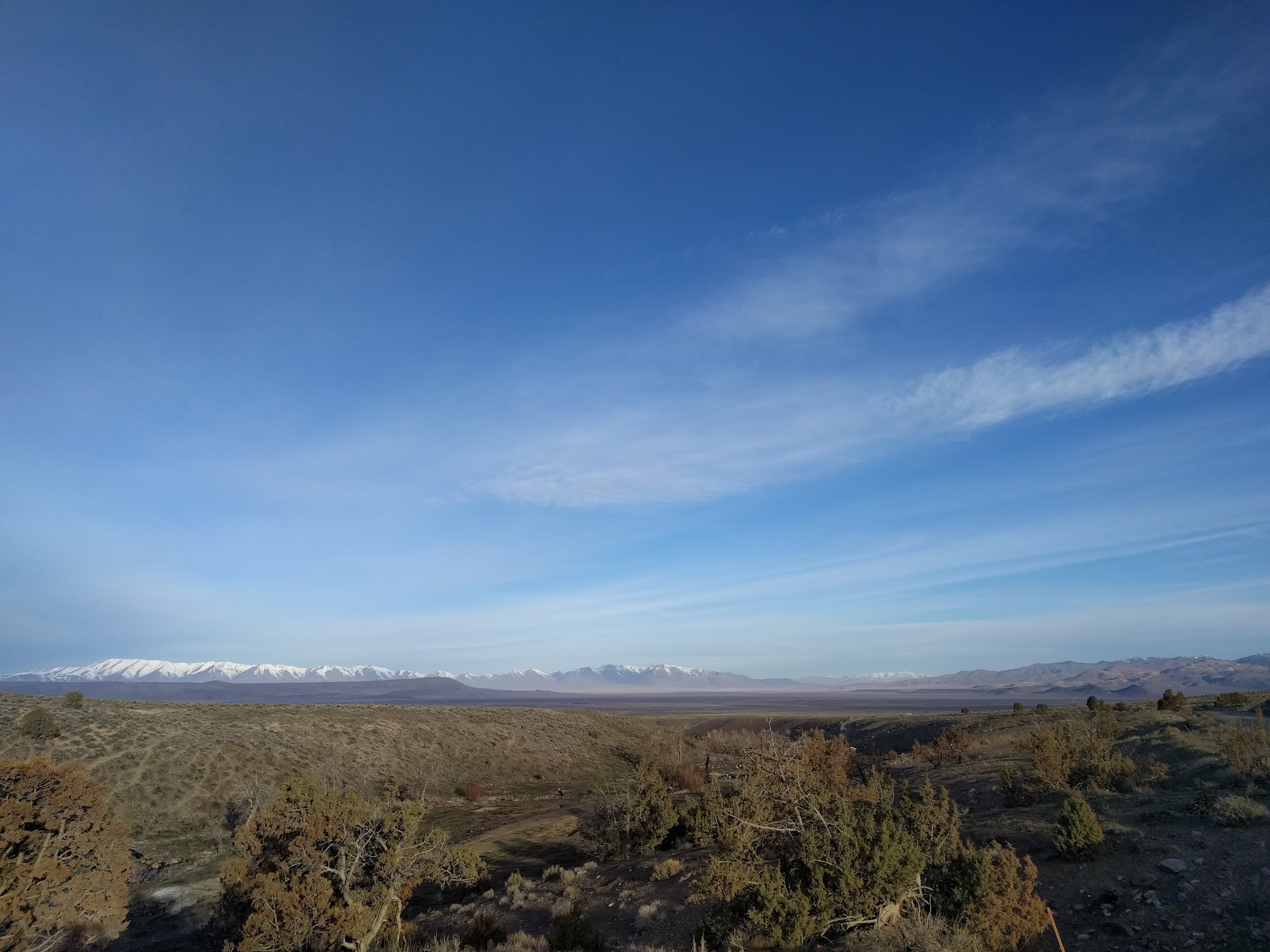 Day two was mostly driving, but we took a few planned and un-planned stops to break up the drive. First up…

The tiny town of Austin, Nevada lies on the “Loneliest Highway” and bills itself as a worthy stop with “plenty to see and do.” I had my doubts, but I did want to get out and see what Stokes Castle was all about. 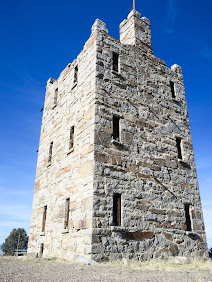 We drove up a short gravel road to the top of the hill and there it stood: a stone structure standing three stories high. It was just a shell of a building, the interior was empty and the balconies had been torn down years ago. A chain link fence protected the structure from vandals (it was obviously put up too late.) It did sit on a pretty little perch and it felt good to be standing outside in the sun, but we didn’t linger very long. Just the remnants of some wealthy miner’s project that his family only used for a couple months before moving out of town.

From there we went into Austin and drove through slowly to see what might be worth checking out. There were some nice bathrooms for visitors, but otherwise it felt like a ghost town. Some old storefronts remained. No businesses appeared to be open. We read the interpretive signs near the bathrooms and headed out to the next destination. I’m not sure why Austin is marketing itself when there is absolutely nothing happening there.

We stopped in Tonopah for gas and searched for a park where we could relax and eat some lunch. I noticed signs for Tonopah Mining Park on our way into town, and a quick Google search got us there.

We sat at the lone picnic table and munched on some food while some other visitors handed us their walking map as they were heading out. Surveying the map it looked like there would be a lot to see here, so we went inside the museum. Inside there were bits and pieces of Nevada’s fascinating mining history. We saw old pieces of equipment, black and white photos and lots of samples of minerals and rocks. 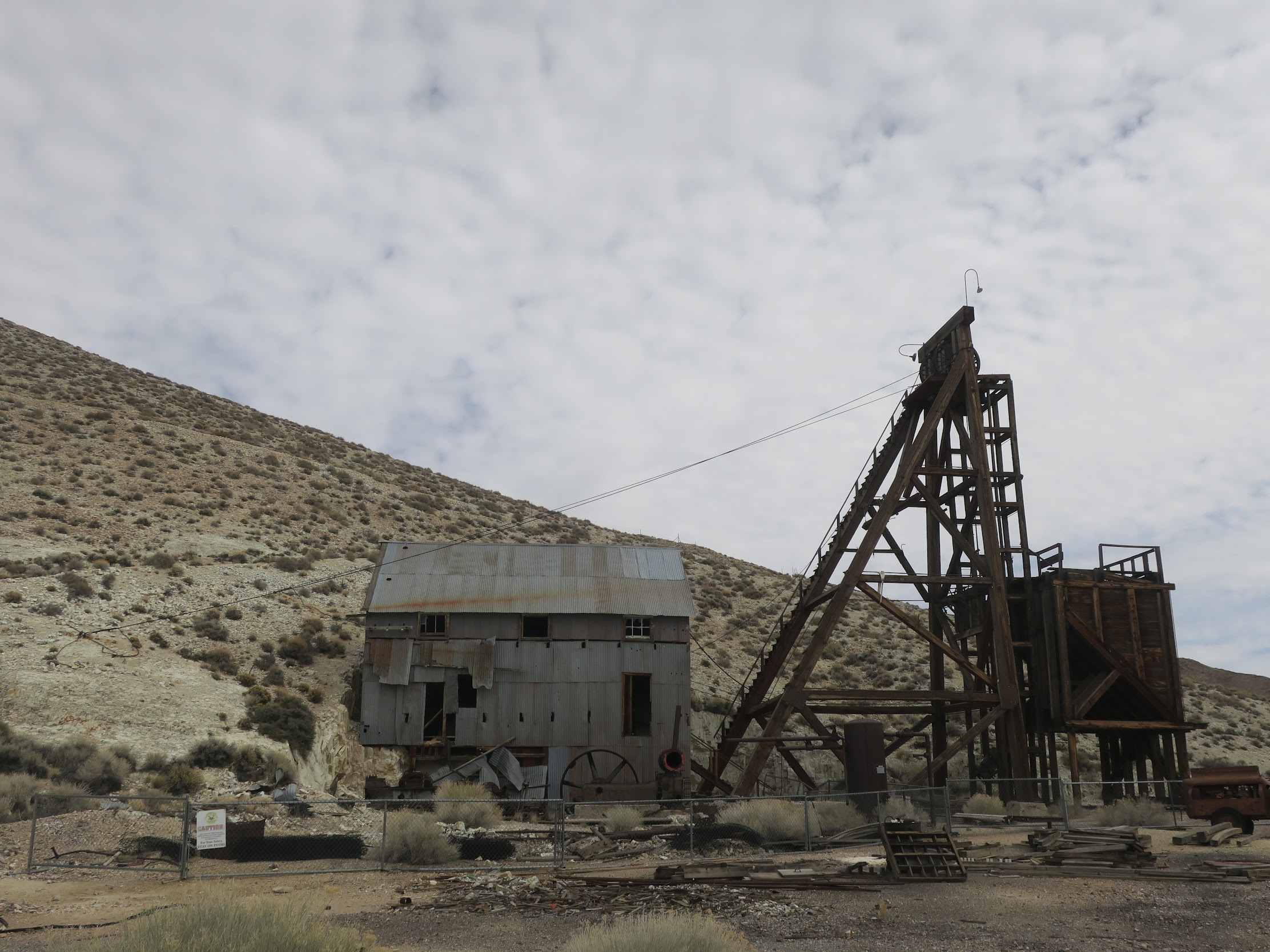 That was cool but we were dying to get outside. This was a hiking trip, after all. For a $5 entry fee per person, we got to explore the park grounds on our own, using the map as our guide. We gladly paid our fee and stepped out into the warm Nevada air. We explored several of trails, which led us past the preserved mine-related structures. We saw huge cracks in the ground from where miners hand-drilled out the precious ore. HAND-DRILLED. Huge cracks. Unbelievable. There were structures used to help move the rock out of the ground to the surface. An old bank safe. Tunnels. Houses for workers. It was a fun place to wander around. All the dangerous stuff was fenced off, so all you had to do was stay on the trail. Plenty of interpretive signs explained what the various features were used for. It was a very unique and worthy stop!

The remainder of the drive would take us along the Extraterrestrial Highway, also known as the most overblown destination in Nevada after Austin. It is located near Area 51, apparently, so it’s earned a bit of a reputation. A few businesses have capitalized on this but neither (IMHO) are really worth visiting. We found this out the hard way, and grumpily piled back into the car for more driving. 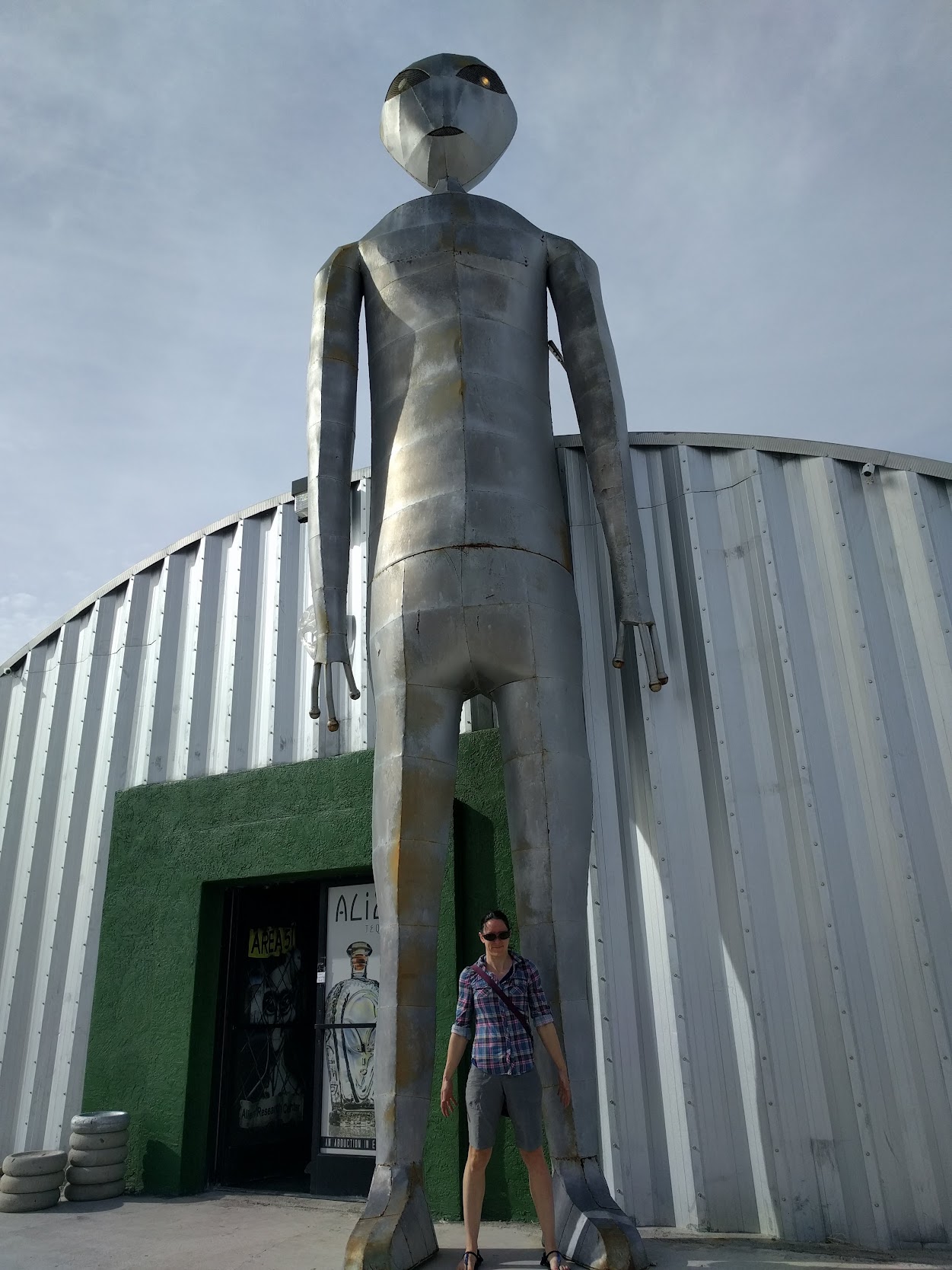 I was excited to get to camp, that is, until we arrived at my planned camping location. It was full. No, there was one spot left but it was wedged in between two RV’s on the shore of a very windy lake. This would not do. We got back into the car and hit the road. I furiously scrambled to find a backup destination.

We pulled off the main highway on a back road that looked like it was headed for the wilderness. It was, but just a few miles up the road it appeared to be washed out. We looked over the edge of the wash and decided it looked like a pretty sweet place to camp. After shuttling all our stuff down and setting up camp I discovered a dirt path that circumvented the wash and re-connected to a perfectly drive-able road on the other side. Whoops. Oh well, it made for a pleasant place to take an evening walk. 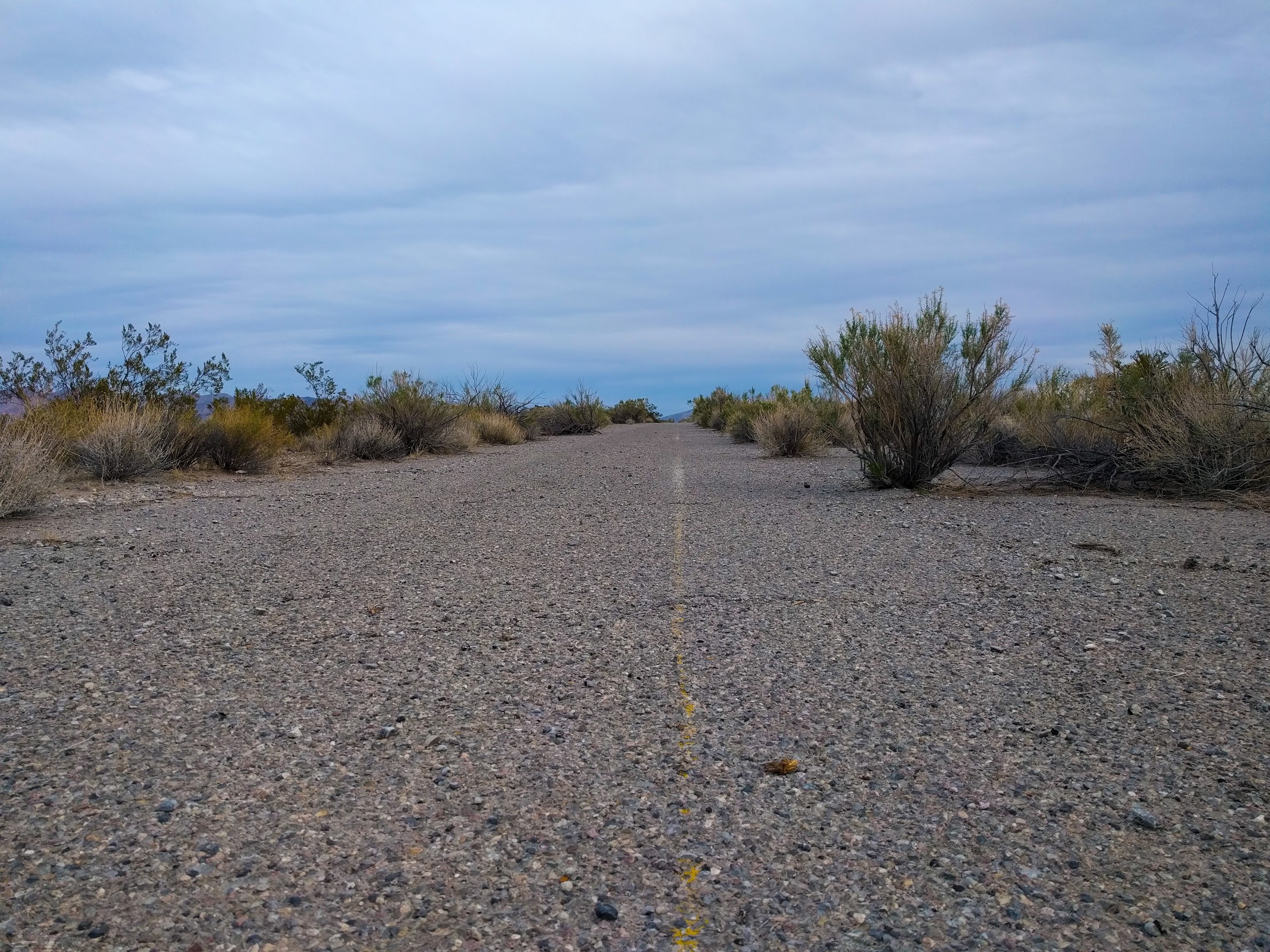 The next morning, we celebrated Easter by eating some colored, hard-boiled eggs and packing up to drive to Valley of Fire State Park…