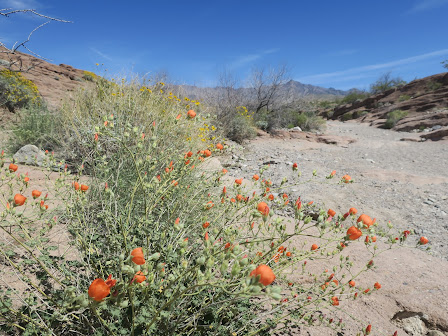 We left Valley of Fire and headed to Arizona Hot Springs. I knew it was a popular hike, but I counted on today being a Monday for keeping the crowds down. We arrived just before 9 am and parked in the large lot right off the highway. It was a strange place to start a hike.

Signs at the trailhead warned about excessive heat. In fact, the trail is closed several months of the summer due to unsafe heat conditions. I’d never heard of such a thing. Sure, it was only April but I could already feel the desert sun beating down on me.

The trail went under the highway and came to a signed junction. It wasn’t terribly clear which trail was “our” trail but we walked in the general direction and followed the most well-worn path. It was wide open desert dotted with sage. Occasionally, prickly pear cactus brightened up the place with its brightly colored flowers. 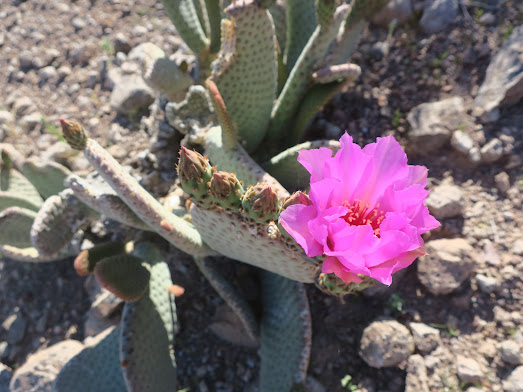 As the path dipped down into a wash, tall rock walls cast shadows in our path. It was delightful to walk in the shade. Suddenly, flowers appeared everywhere. Turned out the plants appreciated some sun protection, too.

The character of the wash changed from wide to narrow, rocky to sandy. We wove through the canyon, wondering what would be around every corner.

There were people. Interesting groups of people. Mostly families, who apparently were hiking out after spending the night. We tried to guess how close we were to the hot springs based on how tired they looked. We were much further away than we’d guessed!

Eventually we heard voices. Lots of them. Mostly children. And then, a hot splash into a steaming stream of water. We’d arrived at the hot springs.

It was nothing like I’d pictured. Nothing like any hot springs I’d ever been to. A trickle of extremely hot water poured down the canyon wall, creating pools in a narrow, twisting slot. The pools were kept in place by stacks of white sandbags. The water temperature became much more bearable as we walked from the upper pools to the lower pools. But all of them were crowded with kids and their parents. And it smelled bad.

We politely pushed our way past the families, hoping to find a cooler and quieter pool. The canyon abruptly ended at a steep drop-off, where a ladder bolted to the rock allowed further passage. We decided to stop for a bit here and have a snack. A group of twenty-somethings sat in the lowest pool. Another pair of travelers, with their dog, were getting ready to leave. It was’t terribly busy but it still felt like a zoo. And taking a dog to a slot canyon with hot pools seemed like a really unsanitary thing to do. We were not impressed. I even forgot to take any photos, so you’ll have to create the scene in your mind.

After snack time, we climbed down the ladder and out of the narrow canyon. From there we saw lots of people heading up from the Colorado River. So THAT’s how so many people got here. Not by hiking through the brutally hot desert, but by floating down the river and walking up a few hundred feet. That also explained why hardly anyone had a backpack.

Instead of hiking back the way we came, we decided to make a loop by finding the White Rock Canyon Trail. 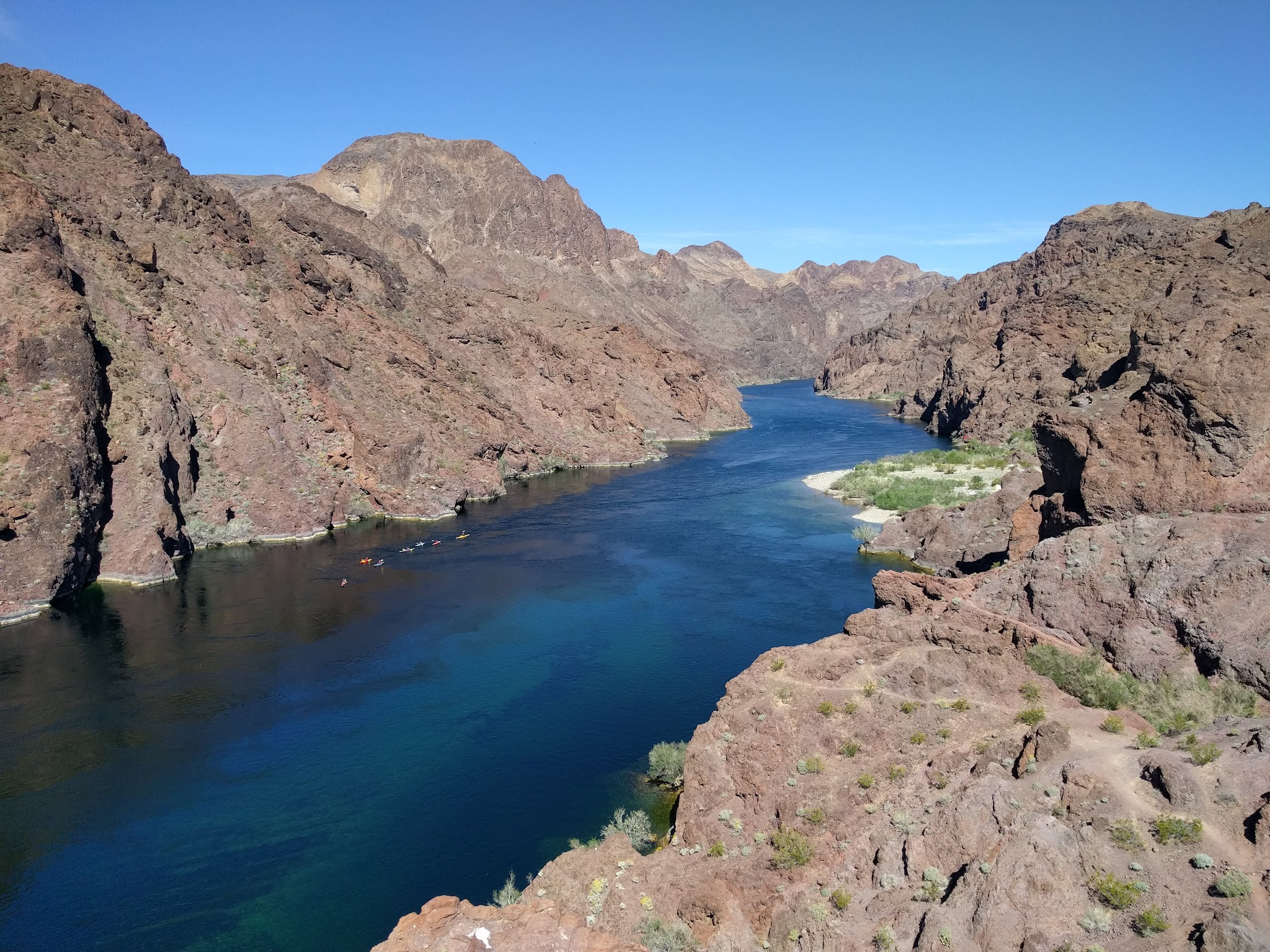 But first, did I mention we were at the COLORADO RIVER?! Holy cow was it beautiful! We scrambled up a little outcrop to get a better view. It was packed with kayaks, raft and other river craft, but it was easy to look past all the humans and soak in the immense natural beauty in front of us. 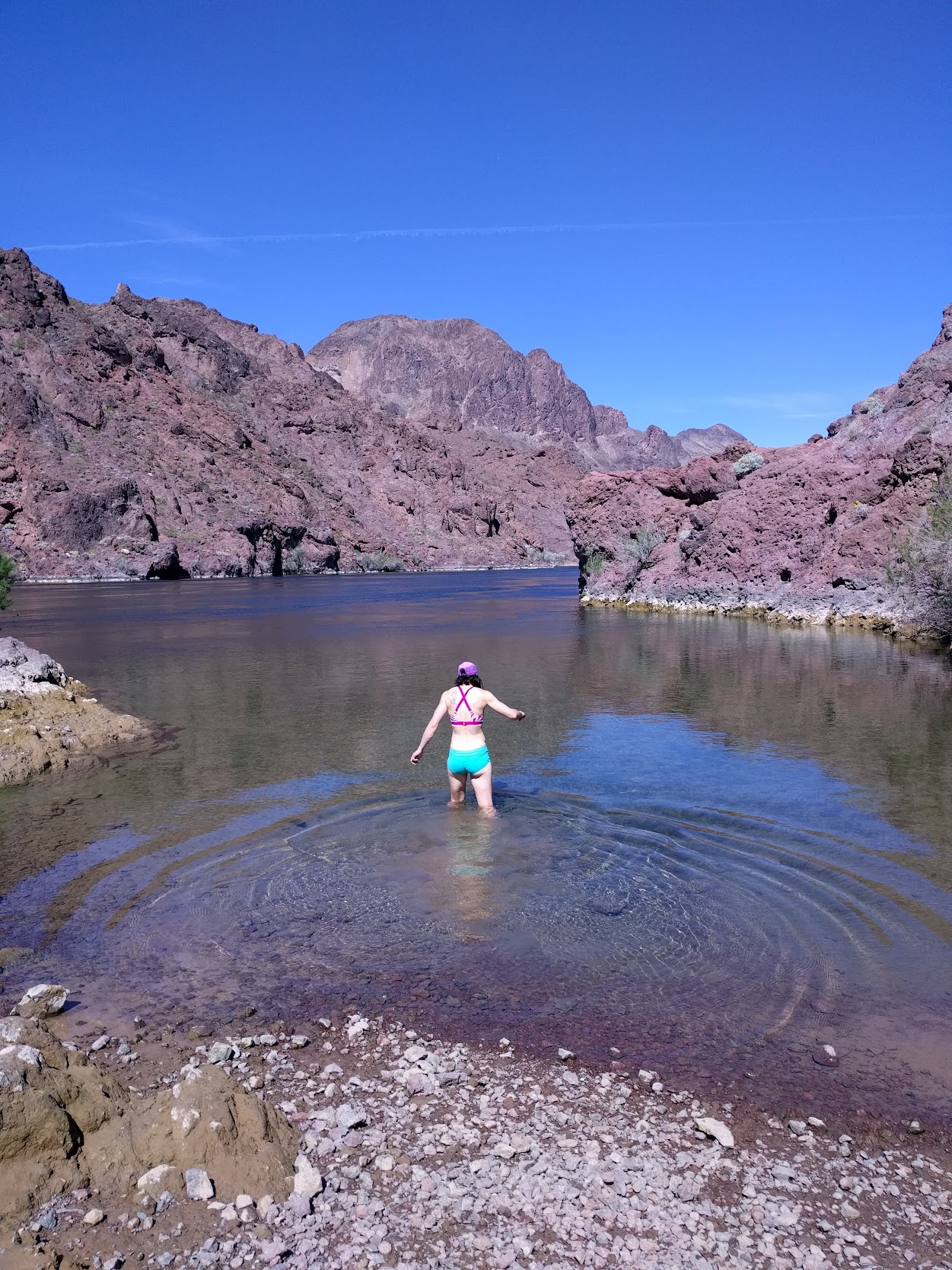 After some confusing routefinding, we scrambled down to a little sandy beach with no one in sight. We stripped down to our swimsuits (which we’d brought for the hot springs) and took a dip in the crazy cold river. Aaron got right in but I was too chicken to get all the way submerged. But our blissful peace was quickly interrupted when a large group arrived at a rock above the beach, playing music on a bluetooth speaker. Cool.

Now we were really introduced to a cast of characters. A dizzying array of people started descending on the area from all directions. It was time to go. We navigated past some confusing signage and a network of social trails in order to get to the White Rock Canyon. 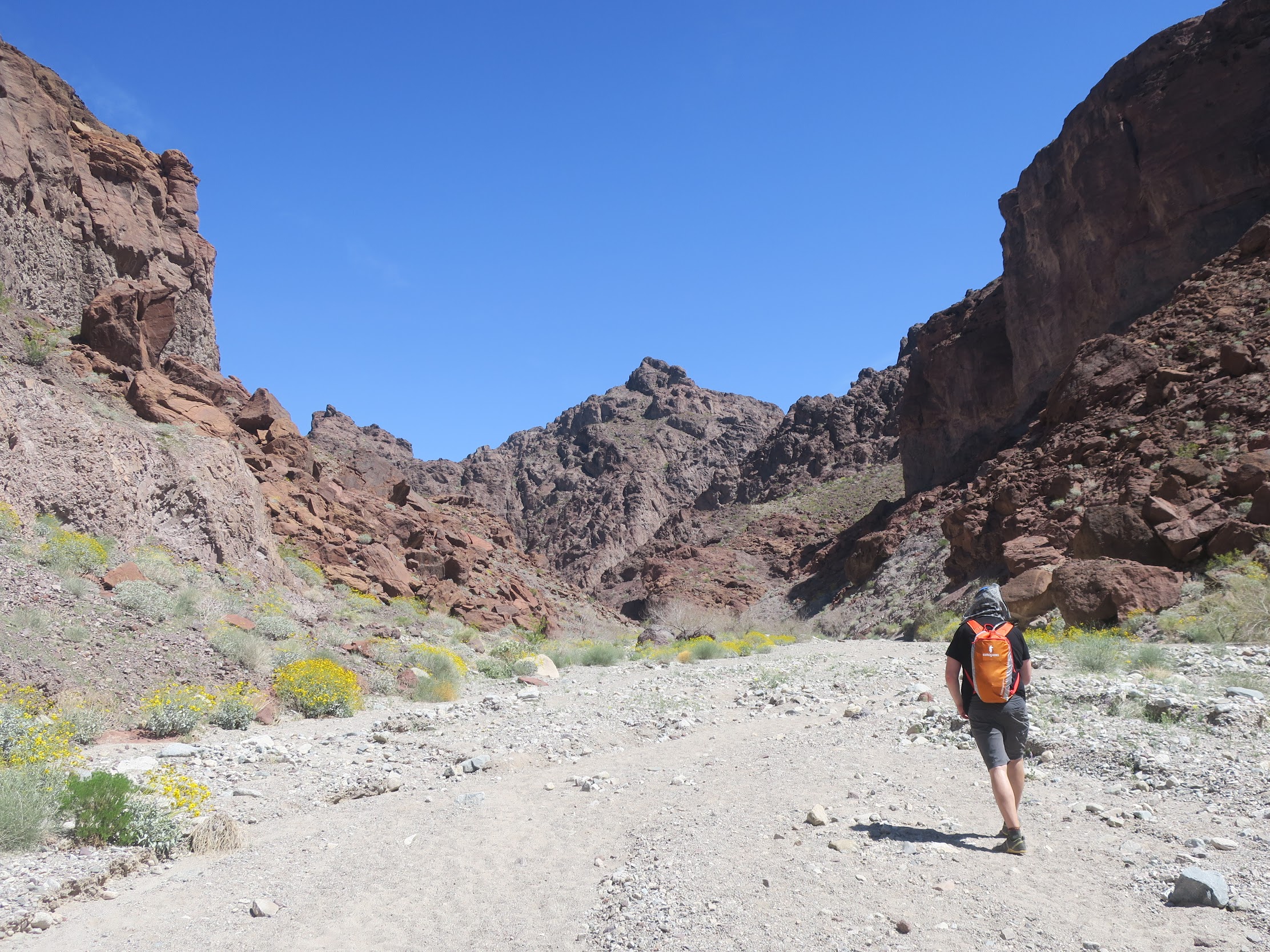 Once in the canyon, it was easy to make our way back. It was an enjoyable walk, too, with plenty of shade breaks. Once we burst out of the canyon we just had to cross that open desert one last time.

We returned to the car around 1 pm. It was 92°. My original plan had a late afternoon hike scheduled after a rest break, but we both decided the heat had taken it right out of us. Instead we chose to make some headway on our drive that afternoon. We stopped partway for an ice coffee and then aimed to find a place to camp in the Kaibab National Forest. 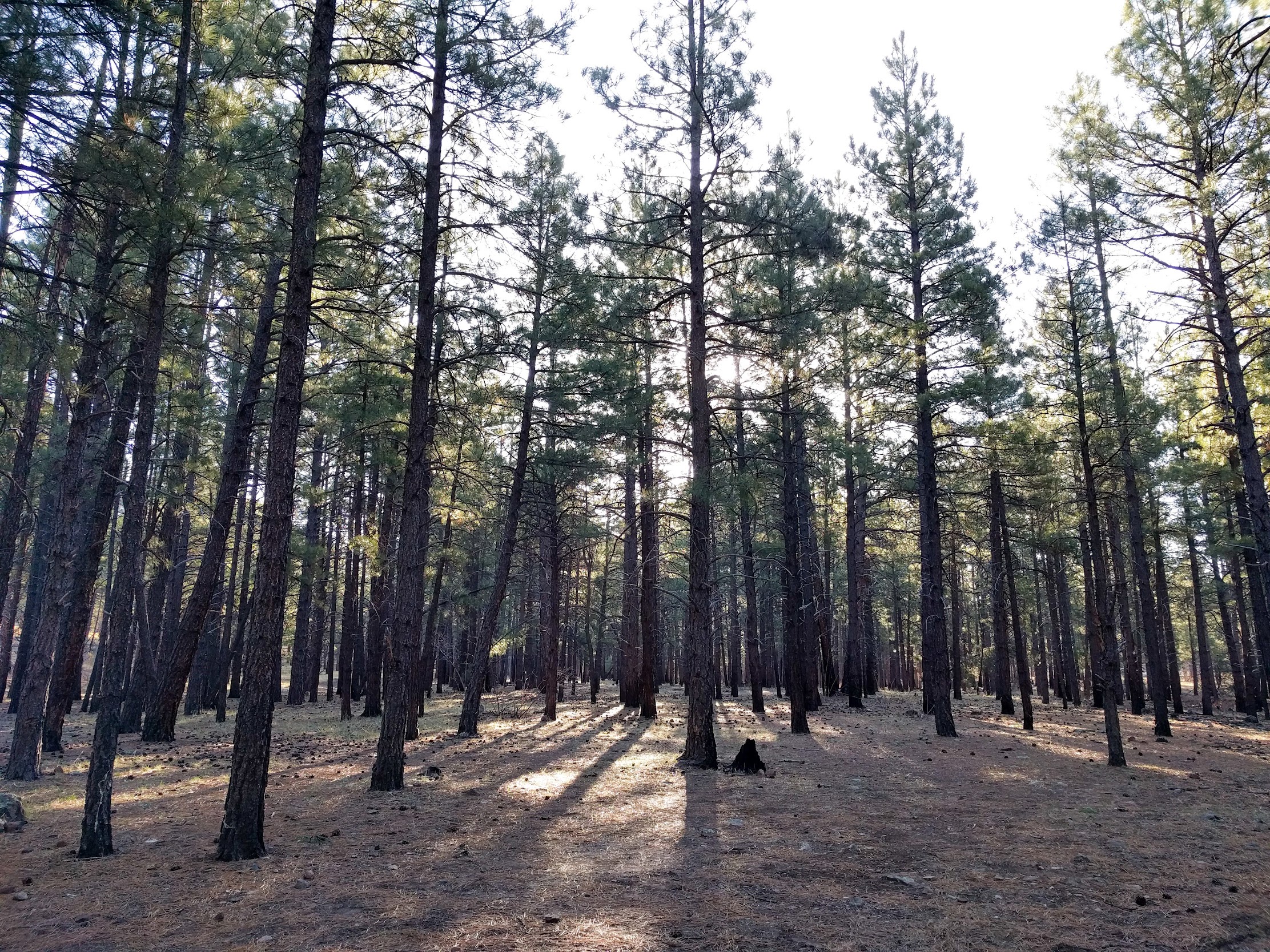 By late afternoon, we found our spot: a flat, dry space surrounded by a sparse Ponderosa pine forest. It felt an awful lot like being at home. The air was cool: a refreshing break from the hot hike we just completed. The ground was littered with trash from previous campers: aluminum cans, bottle caps and other miscellaneous garbage. I grabbed a trash bag and cleaned it up, then set up camp. Aaron busied himself by clearing away all the dry pine needles from around the fire pit. We gathered downed wood, relaxed and made dinner. We ate by the campfire and watched the sun set.

Compared to last night’s camping situation, this was a dream come true.