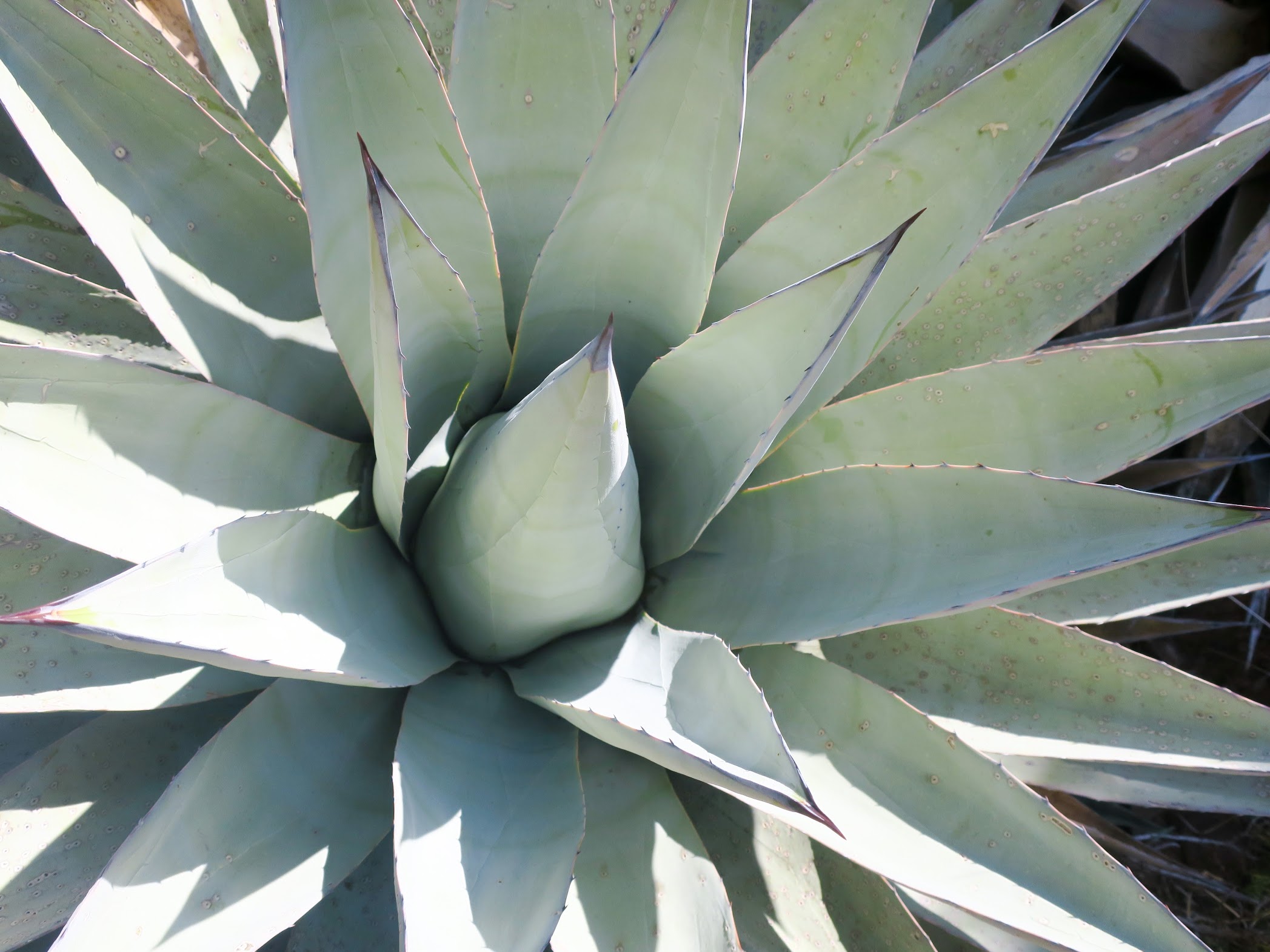 After a delightfully quiet night of camping near Williams, Arizona, we headed east towards Flagstaff for a quick resupply. Then it was south to Oak Creek Canyon.

We’d been warned. A friend who went to school in Northern Arizona told us that it would be crowded, even mid-week. She was right. We pulled into Manzanita Campground mid-morning, hoping to secure a campsite before playing for the day. Fortunately, someone had just left and there was one spot open. We took it. 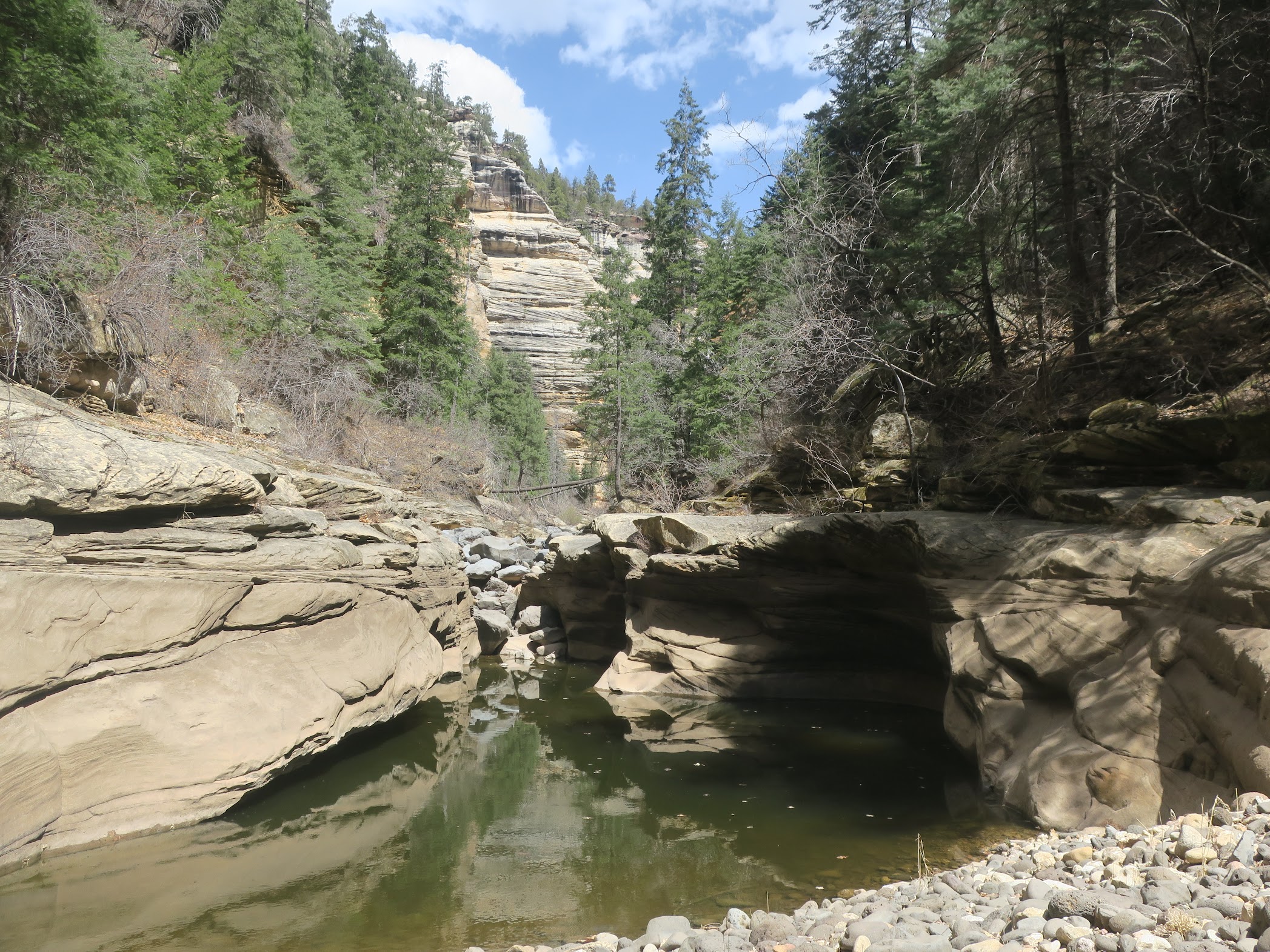 I’d heard that the West Fork hike was really popular, but I had it on the back burner as a possibility since it was supposed to be super cool. But our drive to camp took us right past the massive, yet still overflowing, parking lot. And that stifled any idea about heading to that trailhead. Instead we ventured into a little-known wash that I’d read about in a hiking book. There was no official trailhead and no official trail. We parked off the side of the road at a pullout and fumbled our way until we found what we were looking for. There were many surprises to come…

The wash was broad and brushy. We scrambled along the boulders, admiring the tall, sandstone walls on either side of us. Before long we started to notice bolts in the cliffs. Climbing. The sandstone looked pretty fragile, and we found a few holes where bolts had pulled out of the walls. Not somewhere I’d climb, but I guess it’s a sweet little place to get outside if you live in the area. Certainly not a destination.

We continued on, following the wash as it turned right, left, and right again. Around each corner the character changed. The vegetation, the rocks, the shapes, the smells, the textures… it was like many different hikes packed into one. We stopped for a snack break on a rock ledge above the canyon bottom. Above us, trees clung to the cliff edges, vying for soil and sunlight.

A short while later we heard voices up ahead. When we caught up to them, it was a couple of guys from Pennsylvania who had reached an impasse. The wash came to a sudden dead end at a short rock wall. The rock was smooth, with no good hand holds, and you couldn’t see what it was like on the other side. They decided to turn around. We decided to get creative.

To our right, the boulders led up to a steep hillside that looked scramble-able. It was totally fine. At the top of the scramble, we found a “beach” where the fragile sandstone had eroded away to form a bench of soft, yellow sand. Incredible! We crossed the beach, dropped back down and discovered pools of water behind the rock wall. 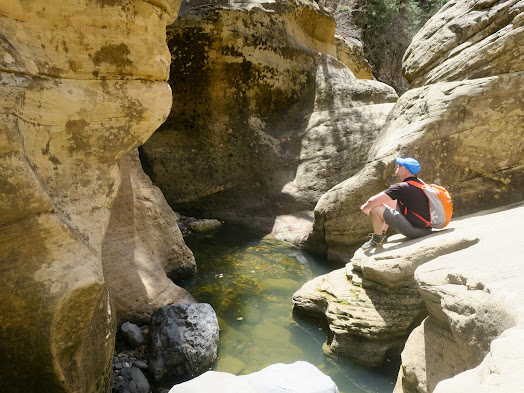 We shouted down to the two men that we were okay and continued on our private canyon hike.

The next couple miles revealed more treasures: a slot canyon, pools of ice, walls hundreds of feet high and a beaver marsh. And the best part was that we had it all to ourselves. 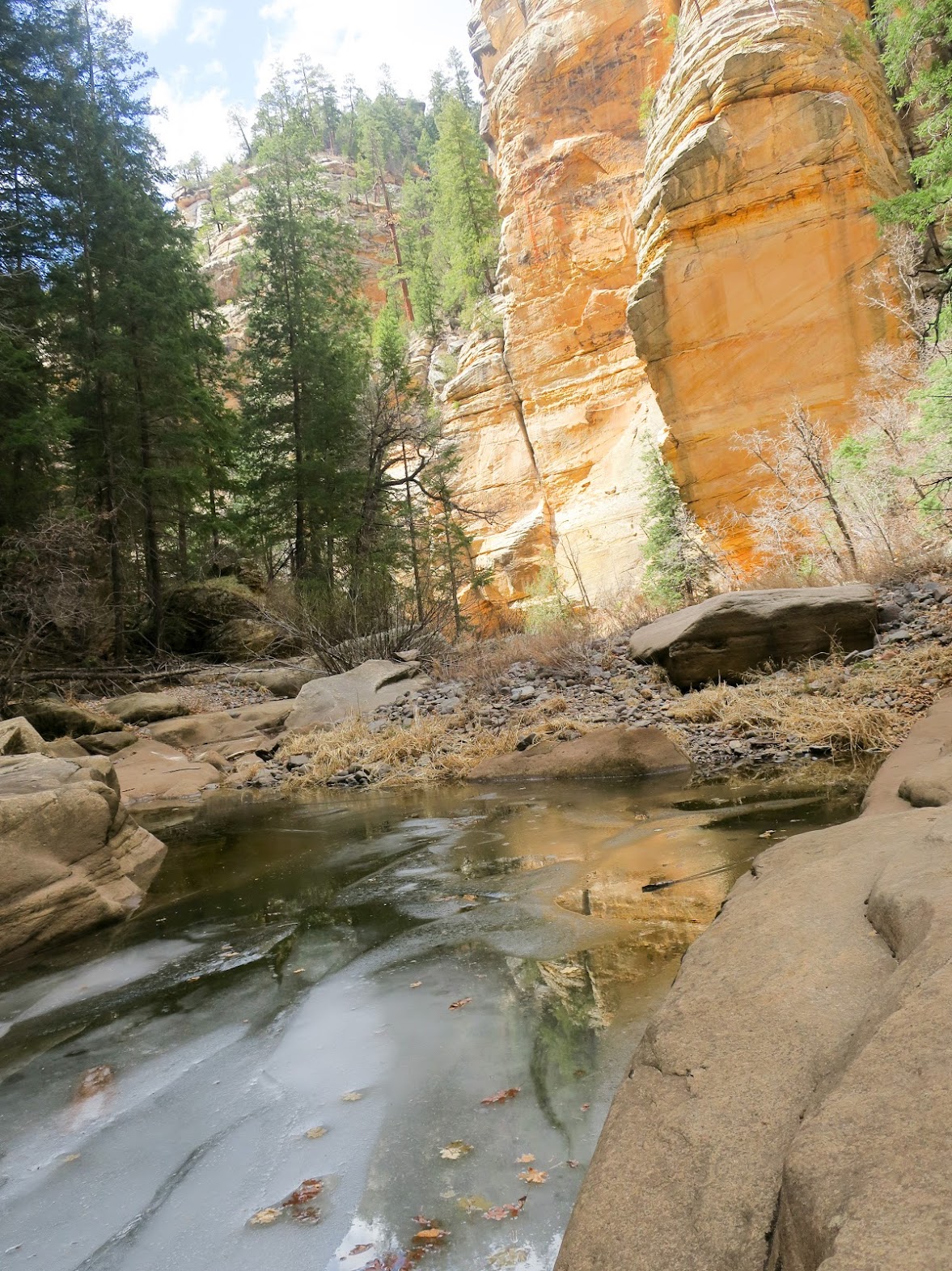 The beaver marsh was truly impenetrable so we made that our turn-around spot. The whole walk back we could hardly believe what a special place we had found. And I was happy that the crowds were content being in a crowd. This was perfection.

We camped like sardines at Manzanita Campground and quickly broke down our things the next morning. Next up: Wilson Mountain.

I was glad we pulled up early to the small parking area near Midgely Bridge. Our book called this a 6-mile hike, but the map seemed to tell another story. Oh well, how bad could it be, I wondered. We were about to find out.

We struck out in a forest of manzanita, pinyon pine, yucca, cactus and agave. What a cool environment! I was so enamored with the desert. All these spiny plants and interesting flowers. Wait…that’s a toilet paper rose. Damn. There was so much TP littering this trail it was really kind of crazy. And a pile of human poop right next to the trail! I was flabbergasted. I tried to refocus my attention on the massive, dried up agave stalks and postcard views of the Sedona Red Rocks. 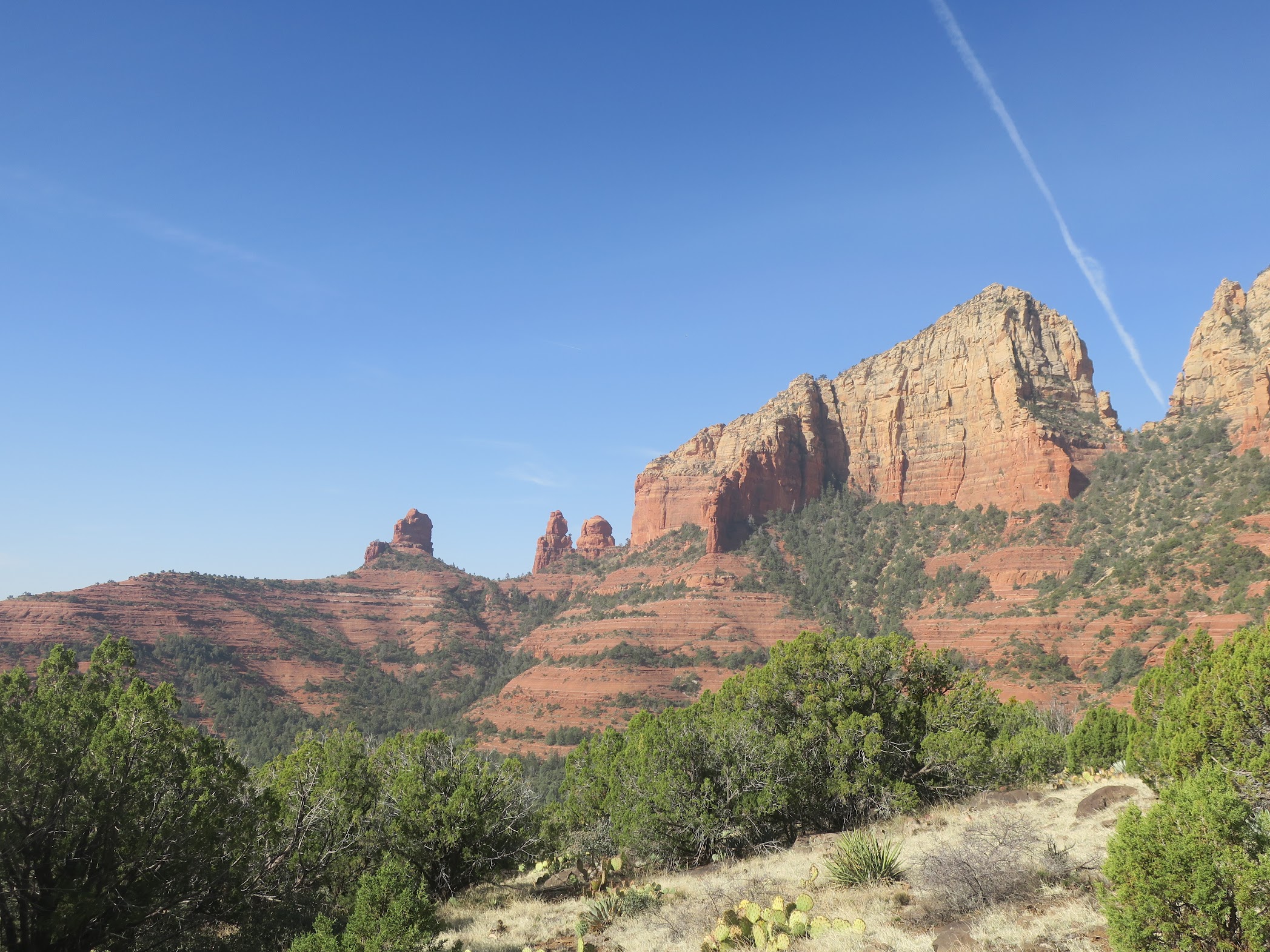 We walked up and up and up. The trail was steep but well switchbacked. There were lots of great views along the way and hardly a soul out there.

At a trail juction at the First Bench of Wilson Mountain we sought shade under an alligator juniper tree. Another couple was there, looking at their map and getting ready for the final bit of uphill to the top. 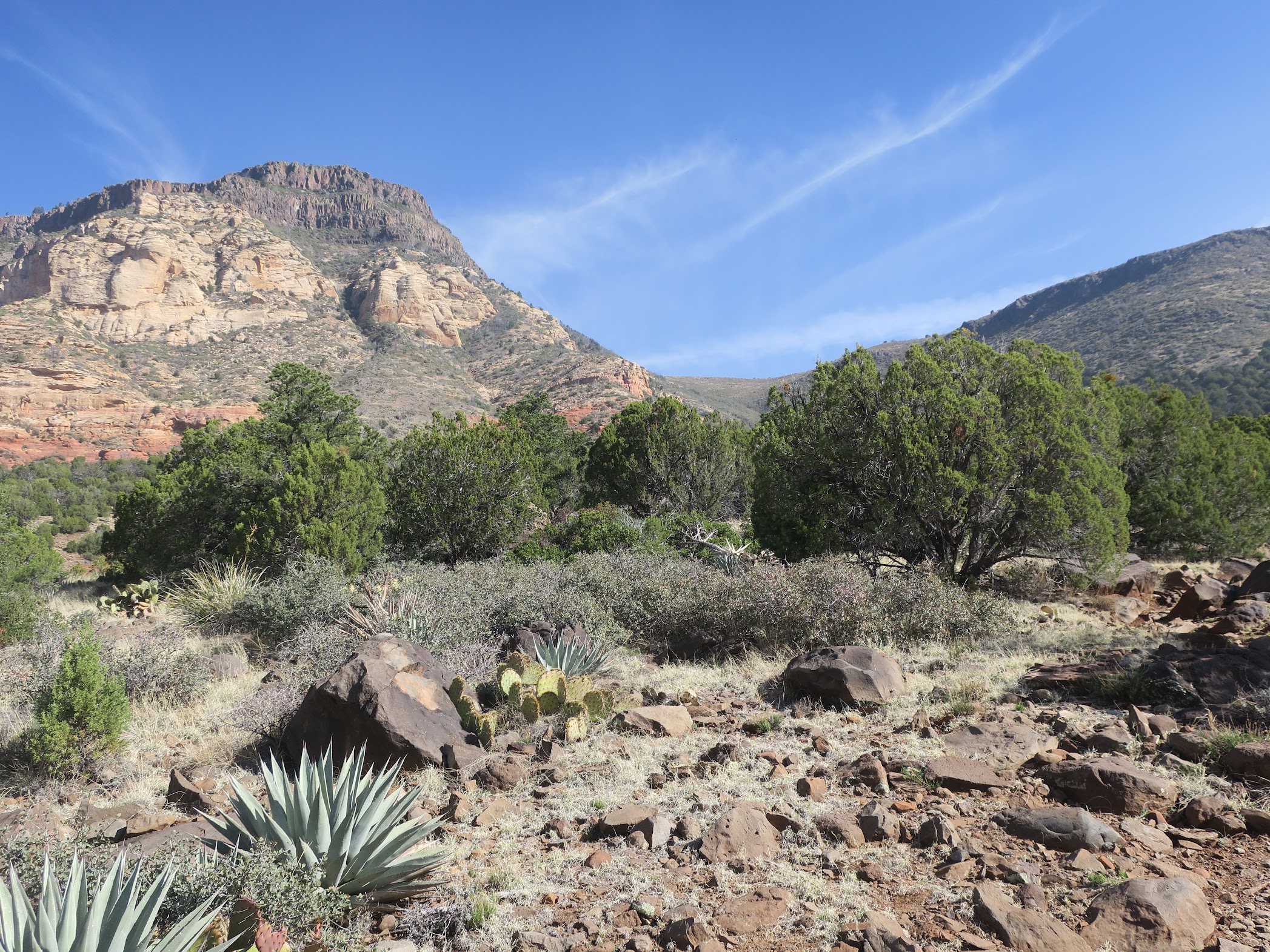 That last stretch had a bit of an open range feel to it. There were sparse juniper trees, low cactus and the occasional agave. Then we walked into a fairly recently burned forest. The next junction gave us two options: Sedona Overlook or Canyon Overlook.

We chose Sedona. The trail went up and then down again to a nice viewpoint. Cool, but no summit. We backtracked to the junction and headed toward Canyon Overlook. My guess was that it would head to the summit or thereabouts, which was right in front of us. Instead, it meandered further and further away, with no end in sight. We were already behind schedule because the hike was closer to 9 miles instead of the 6 we had planned for. And I wanted my summit. So we decided to split up: Aaron would find the viewpoint and I’d tag the summit.

I raced back up the trail and scrambled over and around the fallen trees en route to the highpoint. I learned why there was no trail there; it was made of crumbly rock. Not a great place to send the masses. I took in the views and then bombed downhill to the junction where I agreed to meet Aaron.

In the time it took me to eat an apple and take a little rest, Aaron came into sight. He never made it to the viewpoint. It just kept going…

Our return trip was slow, hot and taxing. Aaron had worn some lightweight shoes for this hike, which turned out to be totally insufficient. He was hurting. The desert sun didn’t help. At least we knew there was an AirBnB waiting for us at the end of today!

Our lovely AirBnB host showed us several options for hiking the next day. “How to avoid these insane crowds?” we asked. He offered a variety of suggestions, and we chose Secret Canyon. “The 4×4 road keeps more people away,” he said, “but you should be able to get there in your Subaru.”

It was a grueling and stressful mile and a half down the aforementioned 4×4 road where we decided to call it quits. Aaron found a place to park on the side of the road and we hoofed it the rest of the way to the trailhead. There it was surprisingly shaded. Madrone trees and tall shrubs protected us from the already boiling hot desert sun.

Soon, however, the trail emerged from the shade and gave us our picture-perfect views. Towering red rock sculptures rose up on all sides. The trail hovered above the canyon bottom and eventually took us down into the forest. 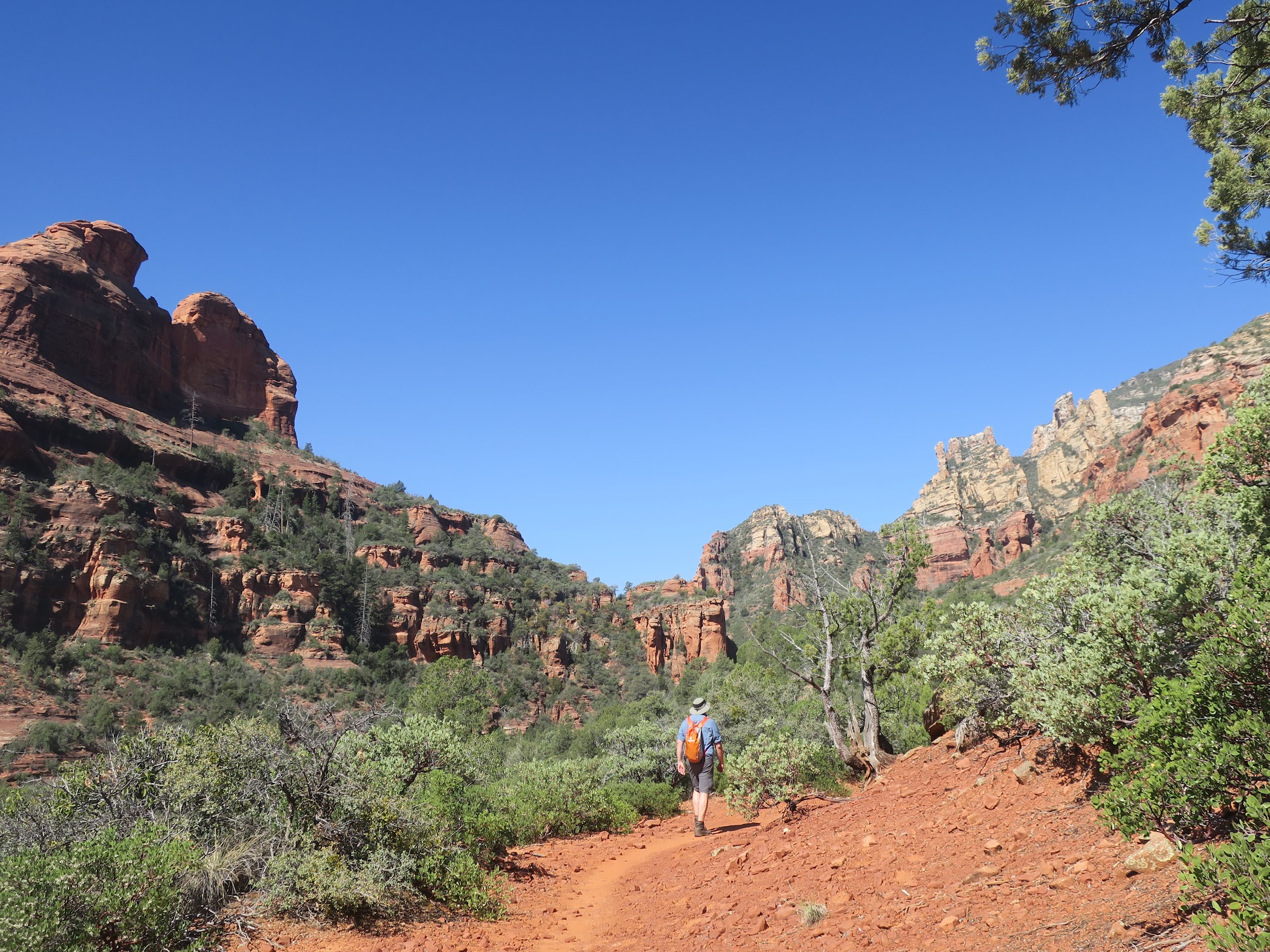 Yes, the forest. So much for another epic canyon hike. At least there was shade, and no people. We walked and walked. And walked. It wasn’t terribly exciting in there. Everything was bone dry. The leaves were mostly brown, there was hardly a flower around, and the vegetation blocked our rocky views. This is not what we came here for.

We each came to a similar conclusion several miles in. Do we have to do this? So, we turned around and made good time getting back to those pretty views. We had to decide what to do next. There were several hiking options and plenty of time, but we instead decided to call it a day. We’d spent the last few days hitting it hard and it would be nice to have some down time.

Sedona was a mob scene of people and traffic and oblivion. It is not a place I would choose to visit again. I was longing for the quiet of the ponderosa pine forest. I was needing some natural beauty without humans.