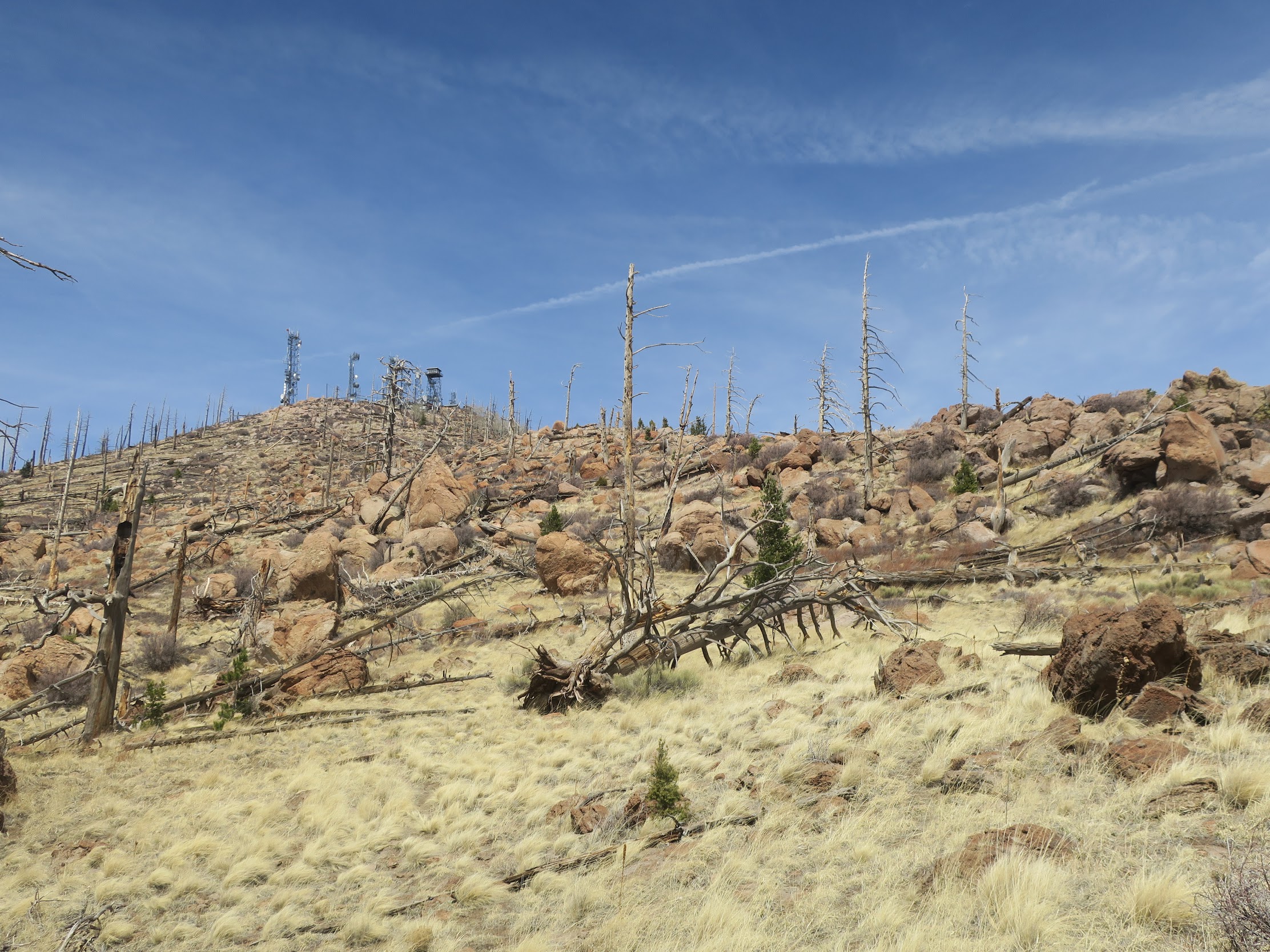 We had a tasty breakfast at Indian Gardens Cafe in Oak Creek Canyon before driving to the Flagstaff Ranger Station. At the ranger station, we chatted a bit about conditions and picked up our permits to climb Humphrey’s Peak. They’ve got the mountain a little more locked down in the winter due to snow conditions. It was free, they made sure we had the appropriate information and we went on our way.

Mt. Elden stands prominently behind the ranger station. Its south and east sides are made out of impressive slabs of rock. A trail zigzags steeply up the east flank in the forest. But we weren’t interested in that.

My research had pointed me towards an off-trail excursion on the rocks. I had a rough description of the route and so we headed that way. The hike began on a nice dirt trail, with cactus and scrubby brush all around. Alligator juniper provided some shade and made it difficult to find the start of our route.

After some back and forth, we found a way up on to the big rocks and started up. The jumble of large boulders was somewhat difficult to navigate. There were giant chasms beneath some of the boulders. Spiny cactus grew in between the smaller crevasses, meaning we had to watch each hand and foot placement carefully. After some creative routefinding we made it to a huge, continuous section of slabs that we’d follow almost all the way to the summit. 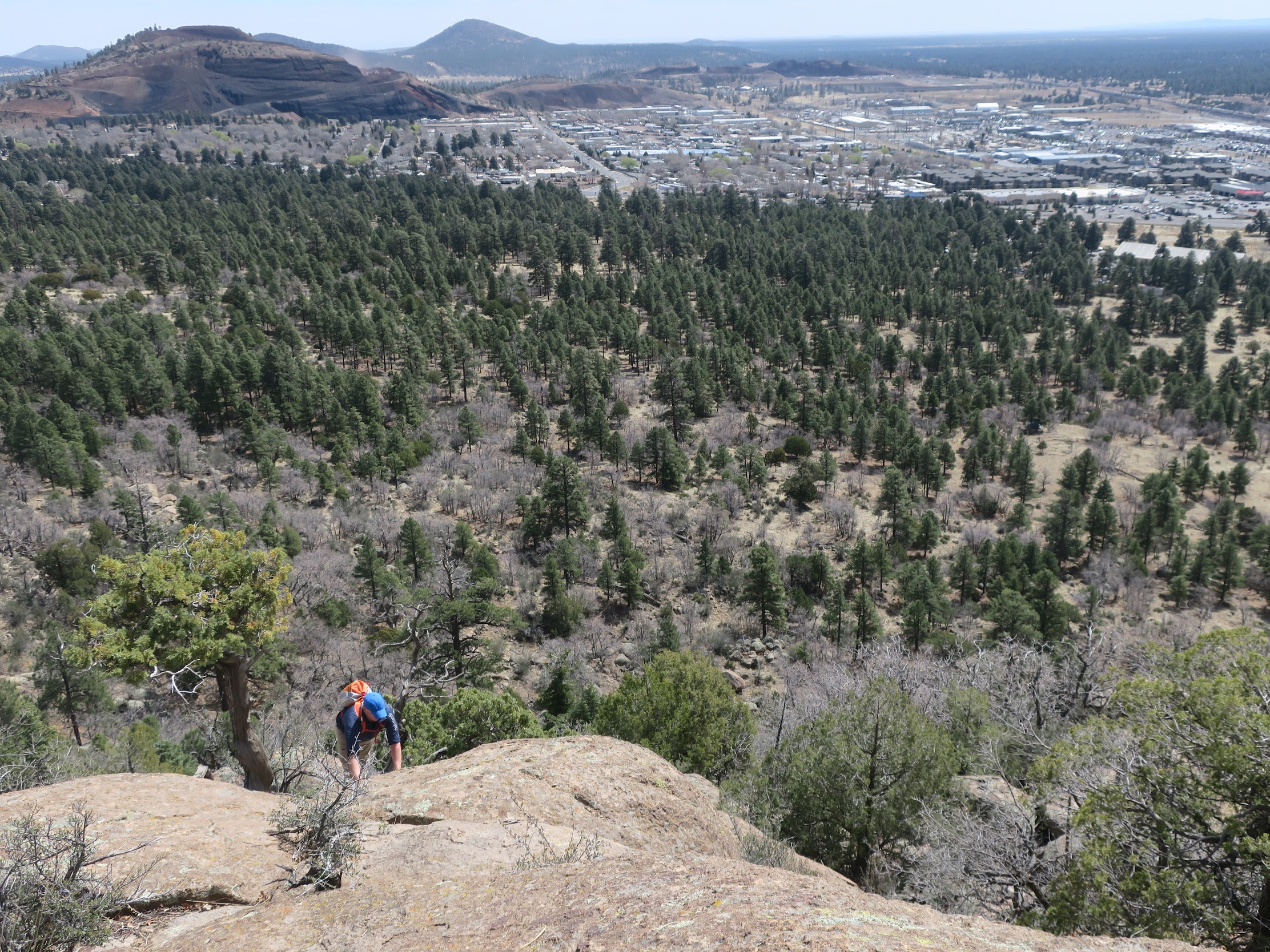 Aaron was a bit sketched out by the scrambling we’d done so far. We stopped to take a break and catch our breath on a ledge. The city of Flagstaff sprawled across the landscape below us. A cool breeze swept across the rock as the sun beamed down on our faces. It was at once cool and hot. Once the adrenaline had settled down, the real fun began.

Above us, over a thousand vertical feet of rock scrambling stretched off into the distance. We hiked up and up and up, our calves screaming the whole way. Along the route we came across two other hikers who said they’d never seen anyone up here. It was a brilliant route, hidden in plain sight. They quickly passed us and we were again alone on the mountain.

As we climbed higher, the winds really started to pick up. We negotiated our way up the rock, weaving between occasional stalks of agave and clusters of little cacti. I admired the cracks, eroded pits and other features on the rock surface. It was wild, rugged and quiet. A perfect place to take a hike. 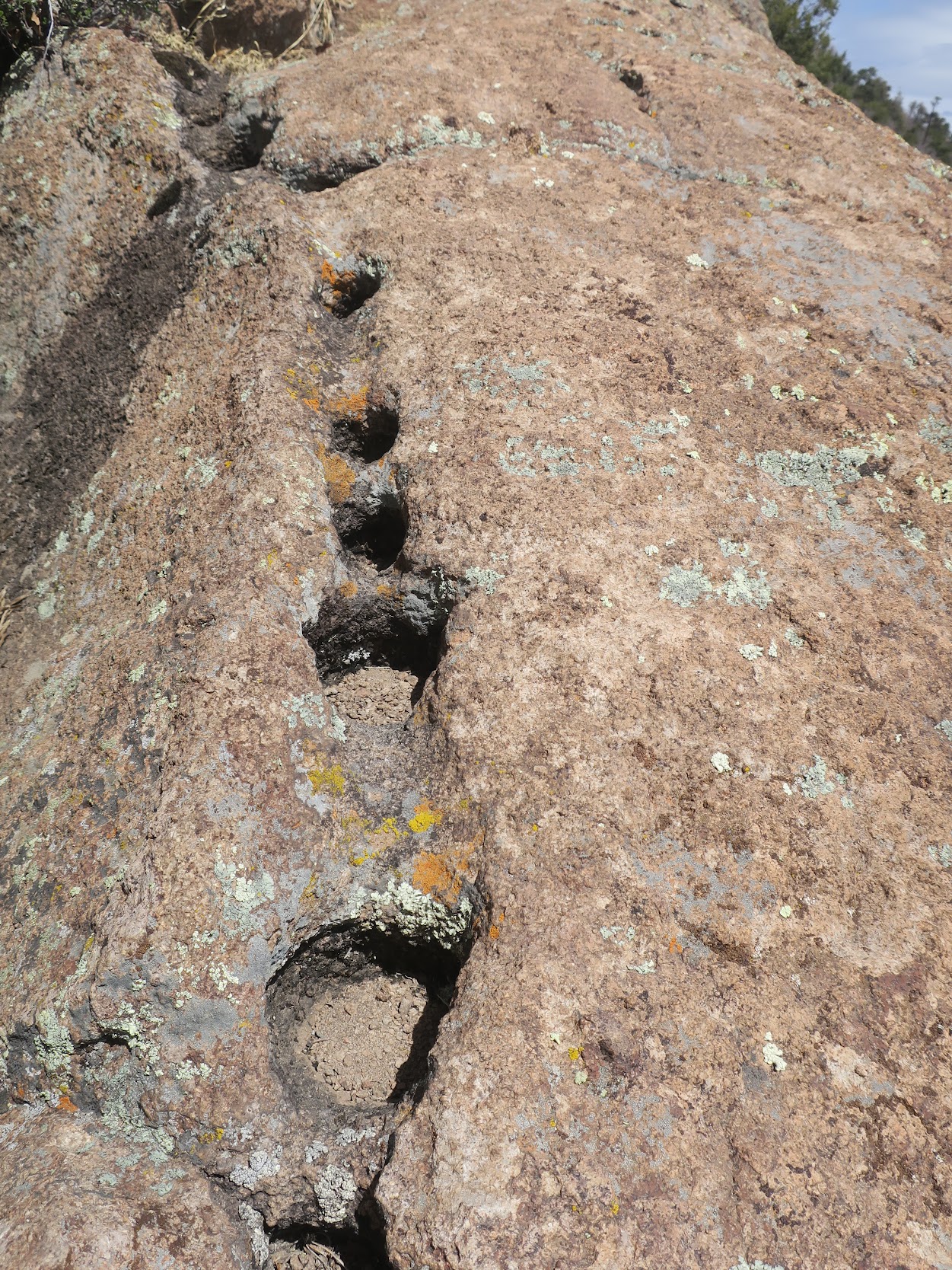 The slabs ended abruptly in a stand of trees and grasses. It took a little more thought to find a beaten path through the upper portion of the mountain. Powerlines, cables and other development associated with the summit lookout tower provided obstacles for us to avoid on our way. This wasn’t the prettiest part of the hike, so we tried to make our way through as quickly as possible. 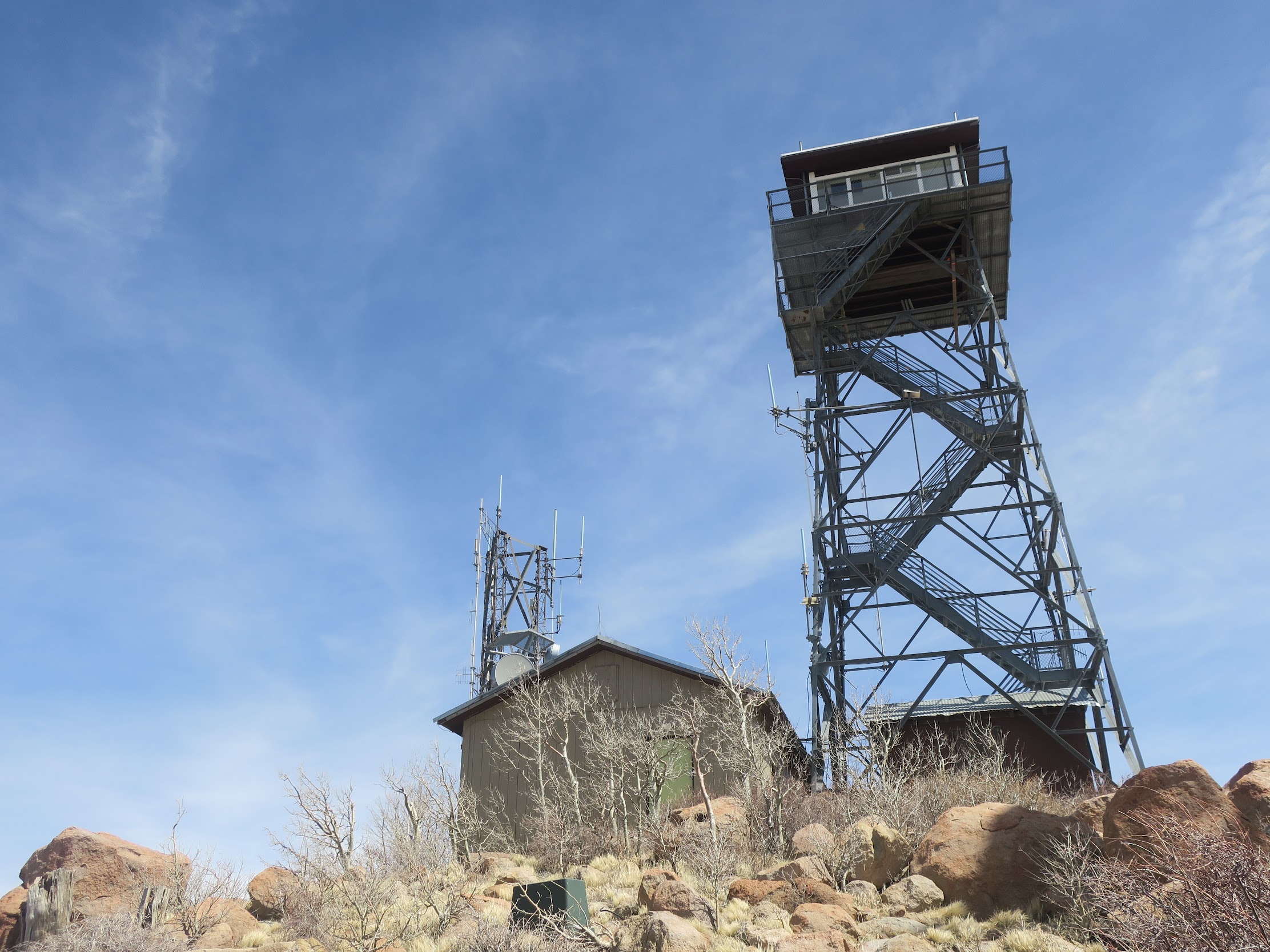 At the summit we could barely hear each other talking, it was so windy. We took a summit selfie and then barreled down the trail to get to some shelter. Taking the lookout trail back would save us from having to downclimb the slabs, not a fun proposition.

On our way down we passed LOTS of people heading up. We refueled once and then high-tailed it back to the car. It was a great hike with lots of outstanding views, and I was glad to have poked around a bit to find this particular pathway that avoided the dog route to the summit.

There was plenty of time left in the day to run some errands in town, take a quick tour of Walnut Canyon and do the Flagstaff Art Walk. Well after sunset we drove east to find camping near tomorrow’s destinations.