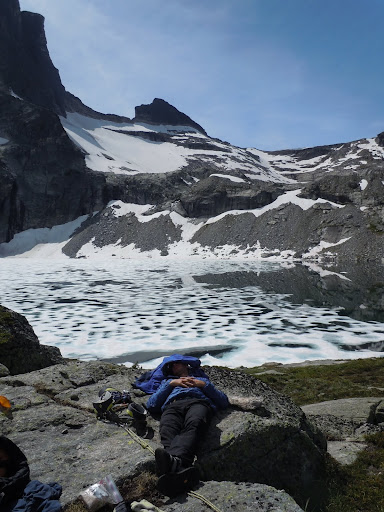 Today, with no particular objective in mind, we decided to take a rest day. Two of our group members hiked out early in the morning, leaving the remaining group with 5 people. We had a lazy breakfast while chatting on Kitchen Rock with a great view of the floating ice in Mulvey Lake. It was a treat every morning to wake up to this little piece of outdoor heaven. In the six days we had been in the basin, we had encountered no other parties. Yesterday when we hiked up to the col, we did see two other teams; but no one had made the slog down to our blissful camp.

We spent much of the afternoon building an incredibly elaborate toprope anchor to TR about 25 feet of overhanging slab. I got bored with that project pretty quickly, but the others played around with climbing on it for hours. Meanwhile, I sneaked in an amazing lakeside yoga session and a quick nap. 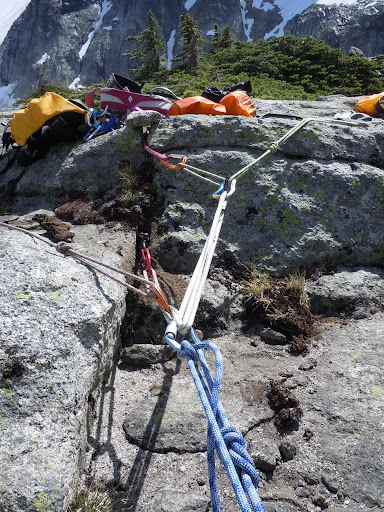 Dinner was fantastic yet again, and the loss of two hungry stomachs was evident; there was a ton of couscous left in the pot at the end of the night. We discussed our options for the next day and decided we would hike back out to the car so we could drive up to Banff for some sightseeing before heading back to Portland. 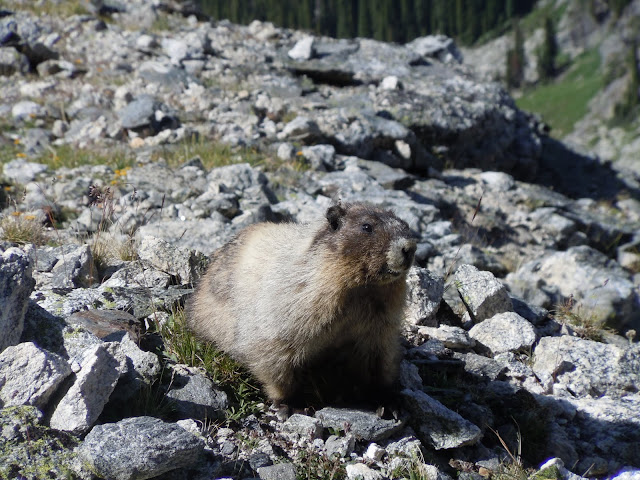 It was a bittersweet day. The weather was phenomenal; clear blue skies and bright sunlight shone overhead. Who would want to leave? But with the prospect of bad weather coming in soon, I would have rather packed out in the sun than in the rain. Plus, we had some extra time to complete the long drive home.

With heavy packs on once again (did they get any lighter??) we trudged up the snow, rock, and snow to the now familiar col. No one really wanted to carry their packs along the narrow catwalk to gain the col so we dropped packs at a big ledge and walked up without them. Brody stayed low while Lee and Eric built an anchor to lower a rope down. The packs were pulled up the corner, one by one, until all people and packs were safely on the rock. It didn’t take that much extra time, and it made the crossing safer. 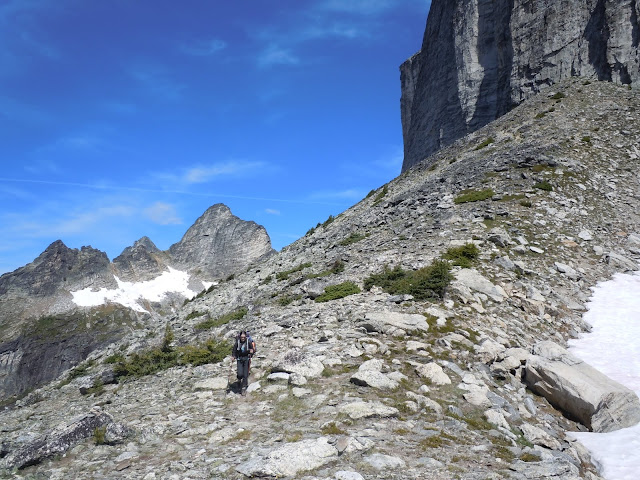 From here, it was a trail hike back to the car. The section between the col and the Gimli camp was the most treacherous. There were some steep downhill sections and plenty of loose rock. When I reached the camp I waited for everyone to arrive. There were marmots, ground squirrels, and goats hanging out here; they know where the food and urine are.

We took a short break here before making the last push to the car. I was ready to just be done with it, so after walking with Brody for a bit I blasted off at my own (non-stop) pace until I saw the parking lot. It felt so good to take that backpack off and change into new clothes. There was a Pepsi, still cold, in the van as well as crunchy cheesy poofs for a treat. One by one the others filed in and we took our time loading into the van to leave. It had been a tremendously fun vacation with a great group of people, in a place of unparalleled beauty. But, we had to go. 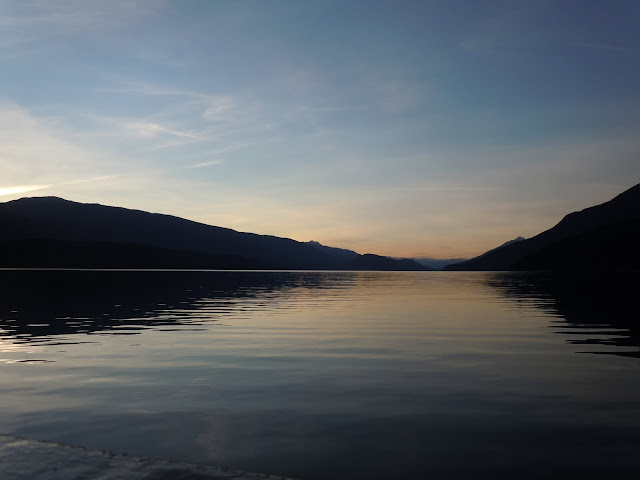 The drive home included a few interesting stops and a road that ended at a lake. A free ferry ride took us across to the continuation of the road. That was a fun little adventure! The drive through British Columbia was incredibly pretty. I will have to come back to do some more exploring in the mountains and forests of this amazing land.