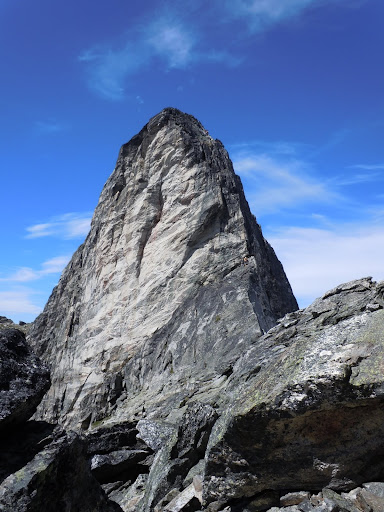 After having a full day of climbing on Asgard, we decided we’d tackle the “easier” East Ridge of Niselheim. This was rated 5.7 and involved just 2 pitches of climbing. Again we split into two teams and since one person planned to head out to the car today, her team tackled the route first. That gave Ryan, Eric and I time to relax, eat lunch and soak in some sunshine before getting ready to climb.

We left camp shortly after Team 1 and cruised up from camp along rock and grass until we reached the upper lake. Here we stopped to put on crampons and get our axes out for the ascent up the snowfield to the Gimli-Niselheim Col. At the top of the col we rested and I watched the other team ascend for a bit so I could try and figure out some route beta before I took off on lead. This climb had no “instructions” for it either, so I would have to learn it on the fly. We ditched our axes and crampons at the col since we didn’t want to carry them up and over the mountain. 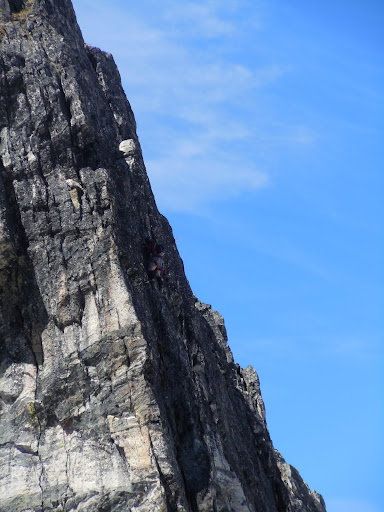 After the first lead was complete and the followers were on their way, we ascended a fixed line up a slab to the first belay, where I began to climb. I immediately had to step right onto the face using a great crack behind a flake for hand and fist jams as I went up. The beautiful flake quickly ended and I looked around for the path of least resistance. About 40 (?) feet up from the belay I found myself in a spot where I didn’t feel comfortable moving up or moving down. I panicked, searching for something, anything to use for protection so I could take a rest. I spied a gap between a rock wedged in a crack and the wall itself where I threw in a tiny purple nut. After clipping the rope in and examining the piece I knew I didn’t want to risk falling on it because it looked shoddy. The panic continued. I used my radio to communicate with my situation with my team, knowing I just needed some time to problem solve. Eventually I stepped down and found a good place to sink a .75 cam that I trusted. I rested. And waited. And looked around. I took one step up, then went back down. Wait. Two more moves up, nope, then back down. It felt like forever.

Finally I made the unprotectable slab moves I needed to gain a ledge and stand on more solid ground. Oh, what a sense of relief! I felt terrible for my belayers sitting on the windy ledge below. Surely I could speed things up from here.

The climbing was simple from here, and I stopped to place gear mostly for rope management purposes. Once I ran out of rope I stopped on top of a massive ledge and scoured the place for a spot to build an anchor. Nothing. I stepped back down to a much smaller ledge and rigged an anchor here. I had a really uncomfortable belay position but I was glad to get the team moving. 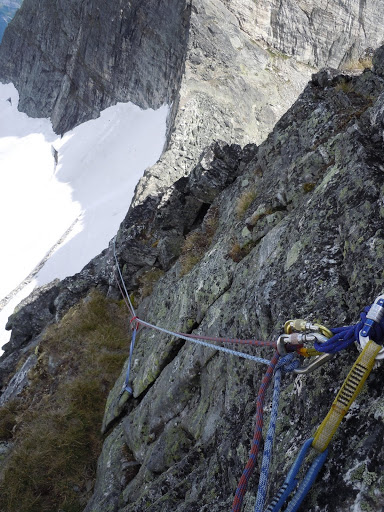 We walked across the massive ledge, holding the rope coiled up in our hands, to the other end. It was unclear how to start the second pitch. I had wanted to climb up and over a short bouldery-type problem to gain the next step, but one of the big boulders lodged in a gap looked possibly loose. Rather than spend too much more time contemplating the start, we set a belay anchor where we could and I climbed over the suspect boulder. It was one of the more fun moves of the climb!

A handful of interesting face moves and hand jams on increasingly more portable rock made an enjoyable start to pitch two. This was all over soon, as it reverted quickly to third and fourth class scrambling. Finding the most solid rock was the name of the game. We were at the summit in no time. 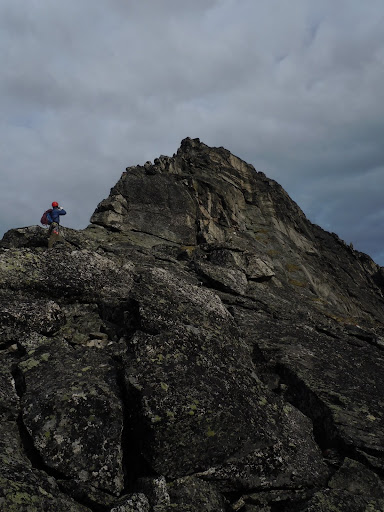 Our summit celebration was short-lived as it was now 5 PM and we had to think about getting down. The so-called 4th class scramble was anything but; we had to rig the rope to lower down a big vertical step and we slung a horn to rappel down a longer stretch of sketchy rock. After all that nonsense we reached a spot where it was safe to change into boots and we hightailed it across the backside of the mountain. We crossed up some snow and mud, then crawled through a cool “cave” formed by a pile of big rocks. From the cave we downclimbed rock to a moat, followed the moat as far as we could, then walked in old footsteps in the snow to reach the talus field at the other side.

The other team was still milling about at the col since there was a miscommunication between teams, and apparently now we’d all be walking back to camp together. We picked up the gear we stashed, climbed up and over the col and prepared for one last snow slog downhill in crampons. At least this didn’t take too long. Lucky for us, one member of the group was enjoying a rest day back at camp and he had dinner all fired up and ready to eat by the time we rolled into camp. Awesome! I was happy to be back before dark.