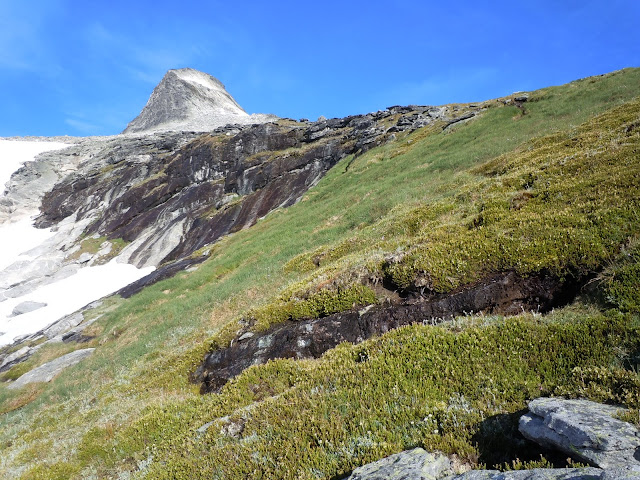 Today we split up into two teams both tackling Asgard from different angles. My team (including Eric and Ryan) chose the shorter, 3 pitch 5.7 route following the SE ridge of the mountain. Asgard looks to be a striking feature from camp, rising distinctly above the lake basin. We left camp, heading up a similar route that we came down yesterday, picking the best route over wet slab, thick grass, and patches of snow.

We had to traverse far to our right to hit the rocky ridge, and then walk all the way back to the left on piles of huge boulders to reach the base of the climb. We debated for a bit where the best starting point would be and then laid out our gear for the climb.

I started up the first pitch, climbing over slabs overgrown with black lichen and tufts of grass. Cracks were flaring, shallow and irregular, which made placing gear a challenge. There were some opportunities to sling features and eventually I began to find some nut placements, which helped me relax a bit. The climbing wasn’t hard but the route finding was not straightforward. There was one fun sequence to climb around a roof, and that’s all I remember about the climbing. There was a considerable amount of zig-zagging to find reasonable climbing that also had places for pro. I made the first belay station when the rope drag was so bad I couldn’t move up anymore. It was not the greatest place for three people to hang out, but thankfully we didn’t have to crowd there together for too long. 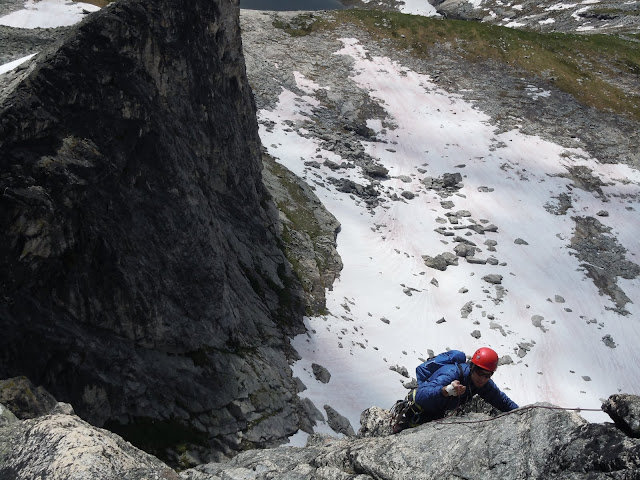 The second pitch began with some “trust your feet” lichen smears with no hands. I was happy to get high enough above the blank slab to find some gear placements. From there I moved slowly left, towards the edge of the ridgeline. There was a short section where I was traversing on edges on the south face of the mountain with a good 1000′ of vertical drop beneath my feet. A nice looking crack lured me further along the traverse. But when I realized I would get stuck out here if I made too many more moves here, I reached out long for a nice cam placement, then hopped up the slab back onto the ridge proper. That was exhilarating. As soon as I found a mediocre ledge I stopped to build an anchor. 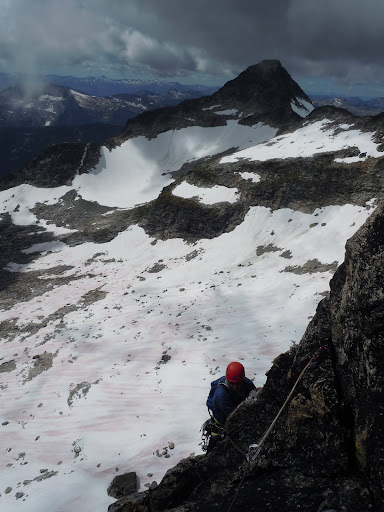 I’m pretty sure my two followers enjoyed the exciting jaunt on to the face based on their commentary on the way up. The next pitch was more similar to the first, with easy climbing and not too much pro. There was grass growing in all the cracks and on the ledges, and I had to trust that some of those ledges weren’t just thin piles of dirt that would blow out when I stepped on them. I ran the rope out to the end on easy scrambling and belayed the others up.

Not sure what the rest of the ridge would bring, I set off on belay for a fourth “pitch.” It turned out to be pretty easy walking, with some cool exposure and teetering rocks. I reached a bolt and a piton tied together with webbing and decided to stop here. The rest of the ridge we clambered up unroped, and shortly after we were standing on the summit. 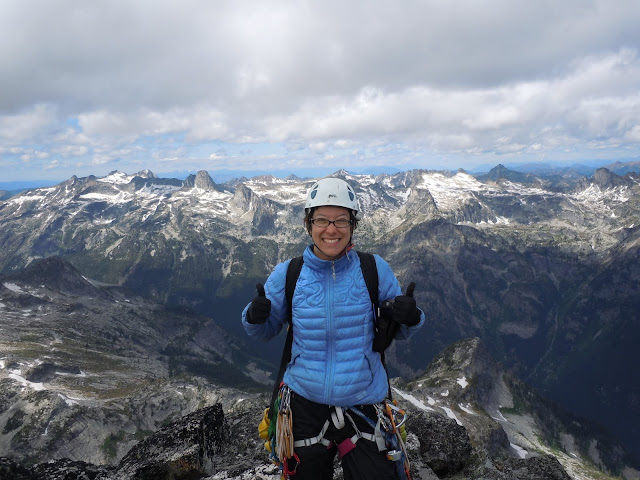 The other team was nowhere in sight but we were in contact with radios. They apparently had some routefinding issues and would be awhile before summitting. We hung out on top for a good hour before we packed up to walk out. It was so beautiful out here with 360° views of snowy peaks, massive granite faces and deep valleys.

On the way down we decided to use the bolt/piton anchor station to set up a 60 m rap with the double ropes we had. Ryan went first, taking in the pleasures of tangled, ornery ropes on the way down. She eventually pioneered a new arm-gunslinger-rap technique that no doubt will be the hit in climbing circles in the coming year. 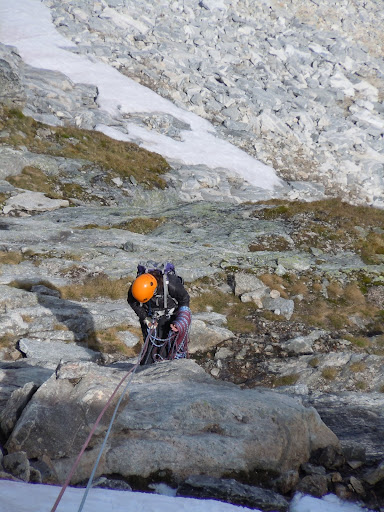 After the rap, we pulled the ropes free and continued to reverse our route all the way back to camp. We took turns testing out the quality of the snow, which was never exactly what we wanted it to be. With no crampons or axes it was easier to boulder-hop most of the way back down to the grass.

We noticed the other team had summitted and were making their way down the ridge as well, which made us feel relieved. It was a great first real climbing day in the mountains.