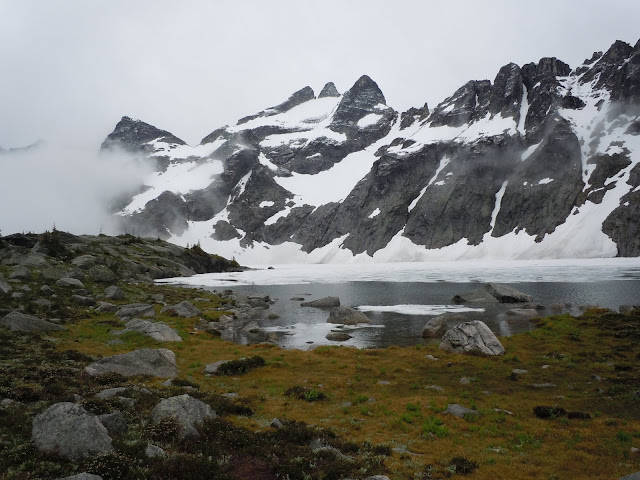 It rained all night long. Wind threatened to smash down our tent. We awoke to gray skies and low clouds shrouding the peaks ringing the basin. When the clouds lifted briefly, we caught sight of fresh snow plastered to every teeny shelf on the enormous granite faces above us. While most folks chose to sleep in a little (or a LOT), I was going nuts inside my little tent and decided to get out. I had a nice, warm breakfast and hot beverage while waiting for people to arise. 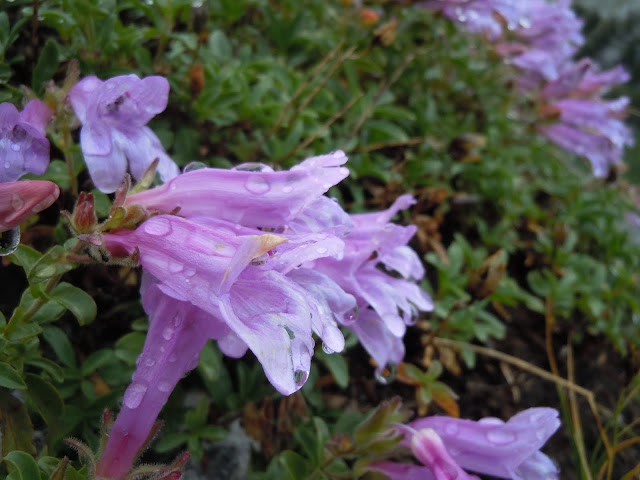 Later that afternoon, the weather relented a bit, allowing Brody and I to take a walk through the meadows below our camp. The meadows were laid out in steps; we descended a steep grassy slope to the first step. Here we could get a better view of the waterfall that also served as the outlet of the lake. We crossed the meadow and forest, descending another steep slope to the next step. There were only a few wildflowers blooming, as much of the meadow was soggy and had probably just melted out. We continued walking through grass and trees until we arrived at the edge of a huge drop that ended in a wide river valley below. It was a classic U-shaped valley with impressive mountains forming either side. The river at the bottom looked tiny from way up here. We angled to our right, following the tree-line, until we could drop down to one of many lakes formed by the runoff from the lake near our camp. They were all gorgeous, with crystal-clear water and snow sculptures piled on their banks. We followed the lakes-and-river system back up to the base of the waterfall, then continued up the grass to our camp.

We enjoyed another elaborate meal for dinner; no one would go hungry on this trip. And none of us wanted to pack out extra food, so EVERYTHING had to get eaten!