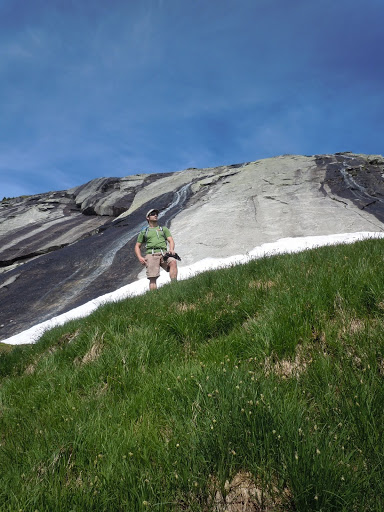 The group decided to stick together for a day of scrambling to a closeby destination. Having very little beta aside from “go up the north ridge,” we decided to pack the rope and a small rack of pro to fix a line if needed. We moseyed out of camp mid-morning as the sun tried to sap every ounce of energy we had. A short detour to cold, refreshing water at the waterfall slab was our first pleasant break out of camp. From there we headed over grass-covered slopes to a huge talus arm, where we took another rest. Once the troops were satisfied, we continued over more rock to a moderate snow slope. We kicked steps in the softening snow almost all the way up to the ridge. Some preferred rock, others preferred snow, and we all eventually met up on the rocky spine of the ridge. From here the walk alternated from fun, easy rock hopping to exposed, slippery, loose traversing. Lichen and grass doesn’t provide the best footing for sure, but we managed to make it to a flat spot below the final push where we all regrouped and assessed the route. We dropped our poles here and ascended carefully, looking out for loose blocks, until we reached the summit. It was marked with a large cairn and had a summit register packed into a canister made of PVC pipe. The views up here were outstanding; there were no roads or signs of civilization as far as the eye could see. We decided it would be nice to have a handline to help ensure everyone’s safety getting down from the top. Spencer took off with the handful of tricams and nuts that we brought and set two fixed lines for the team. The exposure, combined with the experience level of the team and the loose rock seemed to warrant the extra protection. It was a quick descent back to the platform where we left our poles. We were able to find a less sketchy way of returning to the snow on our way back. The team splintered here; three people went back to camp and four continued along the ridge towards Asgard.

The walk towards Asgard was mostly mellow and really fun. We stopped when we reached a vertical drop at an obvious notch. With the gear we had, we set up a rappel for three of us while the last team member cleaned and downclimbed. Looking back up at the route, it seemed much more reasonable to downclimb; it’s interesting how the perspective drastically changed my impression about the rock.

I was glad to be back on snow. We raced down the low-angled slope to the grassy ledges and bouldery cliffs. With some patient routefinding, we made it back to camp in time for dinner.