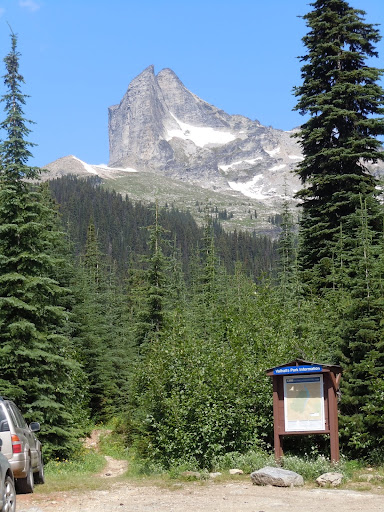 The drive to Valhallas Provincial Park, British Columbia, is about 12 hours from Portland. We completed most of the drive yesterday, and then finished it up after breakfast in Nelson this morning. By the time the van was able to make it up the steep dirt road we arrived at the trailhead, ready to haul our 50-70 pound packs.

There were 7 of us on this team; although I generally shy away from group trips like this, I was excited to be hanging out with this particular bunch of people for a week in the woods. Under early afternoon sunshine, we began trekking up the nicely maintained trail.

Movement was slow. The trail barreled uphill rather steeply, and the sun felt hot. There wasn’t a breeze to be had. I stopped briefly whenever trees offered some shade so I could sip from my water bladder. One hiker was ahead of me and everyone else was behind. I find it easier to take less breaks and move more slowly overall, so I maintained my pace and avoided stopping for very long.

The first real break came as the trail broke free of the trees and Mt. Gimli really came into view. It was impressive: a massive wall of granite rose up from the yellow meadows beneath. The trail crossed a couple of snow patches and lots of grass and wildflowers. Groups of cheery hikers headed back with their tiny day packs as we continued to grunt uphill. I stopped and took off my pack at the broad bench beneath Gimli known by locals as “The Beach.” There, we waited for the rest of the group to arrive. 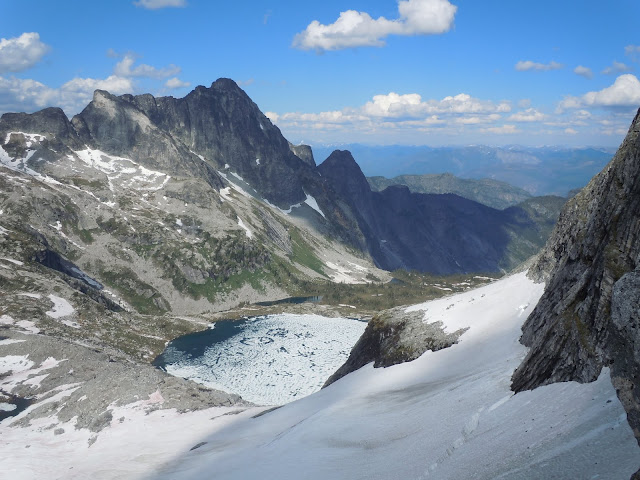 From there the trail crosses steep talus slopes to the Gimli-Niselheim Col. A fairly flat section of rockpile extends from one peak to the other. Below, a moderate snow slope leads down to the lakes. We had traveled close to 3000′ up, and now we had to lose 1000′ to get to camp. Brody and I scoured the col for a way down, to no avail. Again we waited for the rest of the group to catch up.

We decided to lower backpacks down a steep corner so we wouldn’t have to carry them. Two of us rappelled down the corner and moved packs while the others assisted in the lowering, and then walked down a narrow ramp to the ledge where the packs were. From here, we would need crampons and ice axes to descend to the lakes. It had already taken 4.5 hours to get to this point and we still had a ways to go. One of the hallmarks of this trip was the lack of (useful) beta; this was the first of many long and involved days :). 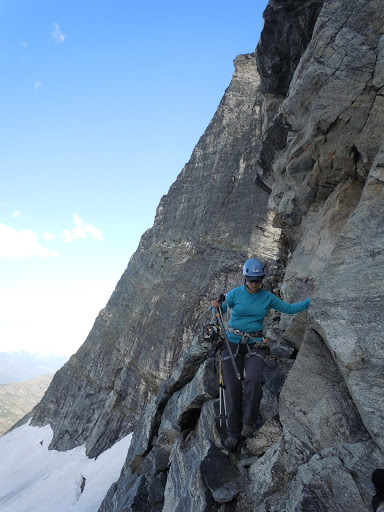 Another 2 hours of walking brought us down the hard snow to a series of lakes. The upper lake appeared to be surrounded by snow, rock, and wet so we continued down to the next lake, which had a long strip of dry, grassy land that would be suitable for camping. As the tired troops filed into our new home, we dropped packs and set up our tents so we could get dinner started. It was nearly dark by the time we were eating, but the food was delicious: a hearty, warm chili.