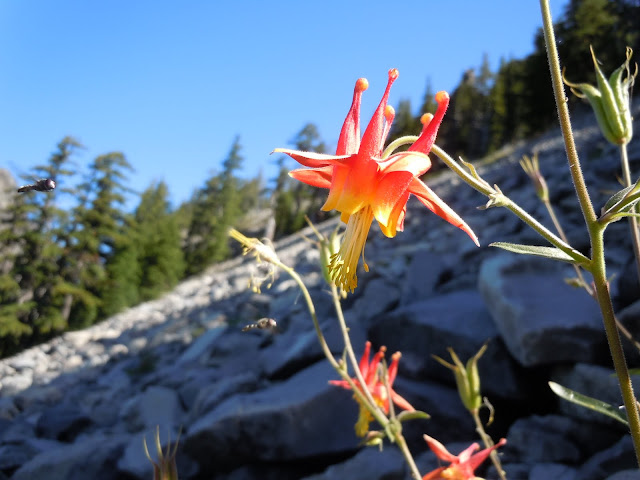 A holiday weekend: 4 summits in 4 days was the plan. I drove down to the trailhead for this hike the night prior and slept out under the stars in hopes of catching an early start in the morning. Temperatures this weekend were threatening to be in the high 80’s and into the 90’s, so I’d planned to avoid the worst heat of the day. This was easy to do, as I was alone for this part of my trip.

At 7 am I began the approach hike up the not-so-pretty Vivian Lake and Mt. Yoran trails, which traveled through brown and boring forest for most of the way. Just before descending to Divide Lake the forest floor picked up some interesting color and vegetation, adding some excitement to this so far trudge-like walk. Upon arriving at the lake I was greeted by a pine marten who stopped to pose on a log before running into the safety of the trees. 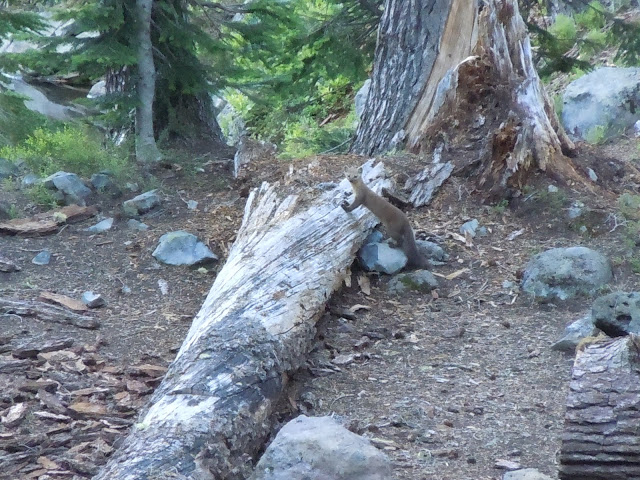 With a copy of the 75 Scrambles in Oregeon route description in hand, I promptly ignored the suggestion to find the climbers trail and headed straight up the obvious rock field leading towards the summit. Mt. Yoran is an impressive looking rock block; from many angles it looks impassable to the average hiker. However, the rock slope leads to a somewhat solid gully filled with loose rock that is manageable to negotiate. I moved into the treed section of the steep slope and climbed up the right side of the rock below the large gendarme. From there, I followed the most obvious route to the notch above, walked up the next gully and traversed right across an exposed ridge to the flat summit. It was over just as soon as it begun. While fun, the scramble was short. I sat atop the peak, enjoying the cooler air temperature and lovely breeze. 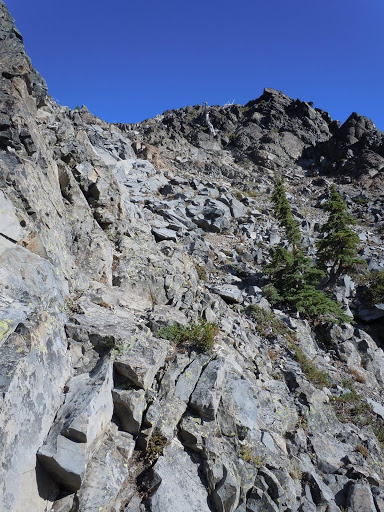 To the southeast, another rocky peak jutted prominently out of the forest below. The seductively named Peak 7138, which is actually taller than what is labeled as the “summit” of Mt. Yoran, looked like a nice secondary objective of the day. It only took me two hours to get here so I had plenty of daytime to play with. 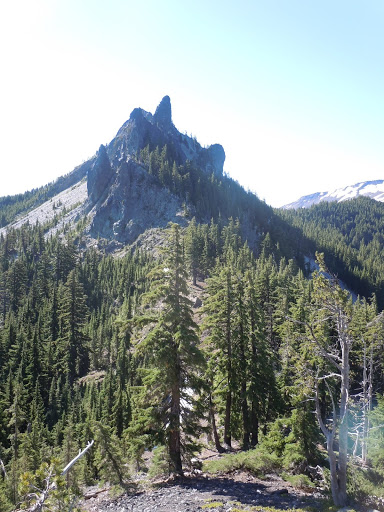 I descended mostly the same way I came up, skirting away from the loose rock in the gully and exiting as soon as I could in order to reach the saddle between Yoran and 7138. I followed the ridgeline, keeping to the south side as to avoid the crumbly, steep, and exposed ridge proper. Traversing talus and grass, I bypassed a tall rock pinnacle and headed for a rock outcrop that appeared to be loose but fun. And it was.

A few hairy moves and tumbling boulders later I reached the top of the peak. That was actually more scrambling and more fun than the route up Mt. Yoran. I would highly recommend doing this double feature to someone considering the scramble of Mt. Yoran. It would be a bit more treacherous with a group of people due to rockfall, so helmets and functioning brains would be advised. 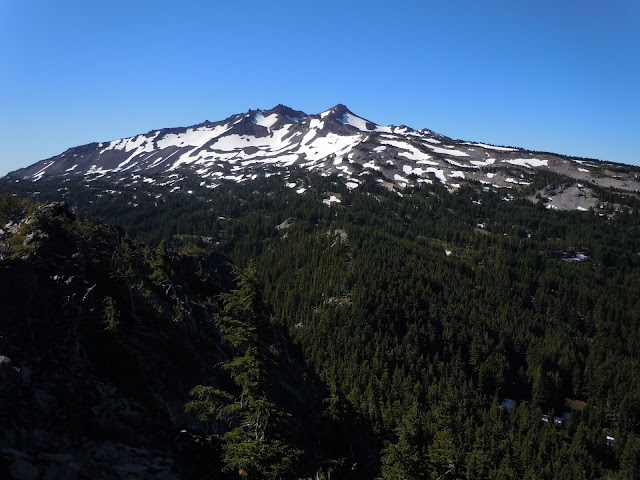 Atop the summit, gorgeous views were to be had in all directions. I admired Diamond Peak, my goal for tomorrow. I also found a memorial carved into a rock: “Norman Thomas 61-87.” I was blown away that someone came up here to this random, off the grid peak to remember a lost friend. As much as I despise these things at commonly visited spots I was surprisingly inspired by seeing this carving located here. I wonder if this particular peak had some significance in this person’s life, or what the story of his death was. I couldn’t find any information online when I returned home, so I will continue to wonder.

After getting sick of swatting flies and mosquitoes I began the exciting descent. I didn’t want to go down the way I ascended so instead I did some rock-surfing down a steep and loose gully that pointed me towards Divide Lake. I cursed the stupid chipmunk who danced across the rock as I fumbled around like a drunken sorority girl. Once back at the lake I paused for a nanosecond to take a picture before the mosquitoes could figure out I was there.

Shortly after, I passed a couple who were on their way up to the lake; they were the only humans I’d see on the trail. I’m not sure if it was so quiet because it was a Friday morning or because this isn’t a particularly popular destination. Either way, it was a win-win situation for me. The triple win came within a quarter mile of the trailhead, where huckleberries were ripe and ready for consumption. I stopped and gorged myself on the berries, which were the sweetest and tastiest huckleberries I think I ever had. They were large and sweet, tasting more like blueberries than the huckleberries I’m used to. What a treat!

I had a snack and then moved my camp to Indigo Springs Campground so I would be closer to my next hike. I still had all afternoon to read, stretch, explore the woods, and relax by the creek. It was a great way to kick off the long weekend.