As we said good bye to Utah, it was clear that we were on the tail end of the trip. Our route was looping us back towards home in the central Willamette Valley. We made a couple of short pit stops in the Twin Falls area along the gorgeous Snake River. When I’m a passenger for long periods of time, I like to pore over the maps and guidebooks I’ve brought along so I can learn more about the area I’m driving through. On our way to Twin Falls, I noticed a curious symbol in the Gazeteer. Quietly tucked away, alongside the symbols for Information Center, campground, and boat launch was something that looked like a spaceship-car hybrid.

Soon, I would find out exactly what that symbol was all about.

Our first real stop was the iconic Perrine Bridge, where BASE jumpers from all over the world come to take a leap. It’s one of the only places where it’s legal to do so without a permit. Just upstream from the bridge, the daredevil Evel Knievel tried to jump across the river in his “skycycle.” While he didn’t make the jump, he survived the crash with just a broken nose to show for it. And now, his unbelievable attempt is recorded forever in the Idaho Gazeteer with a spaceship-car hybrid marking the location of his jump. I thought, if I was a map-maker, what might I try to sneak into a map…? 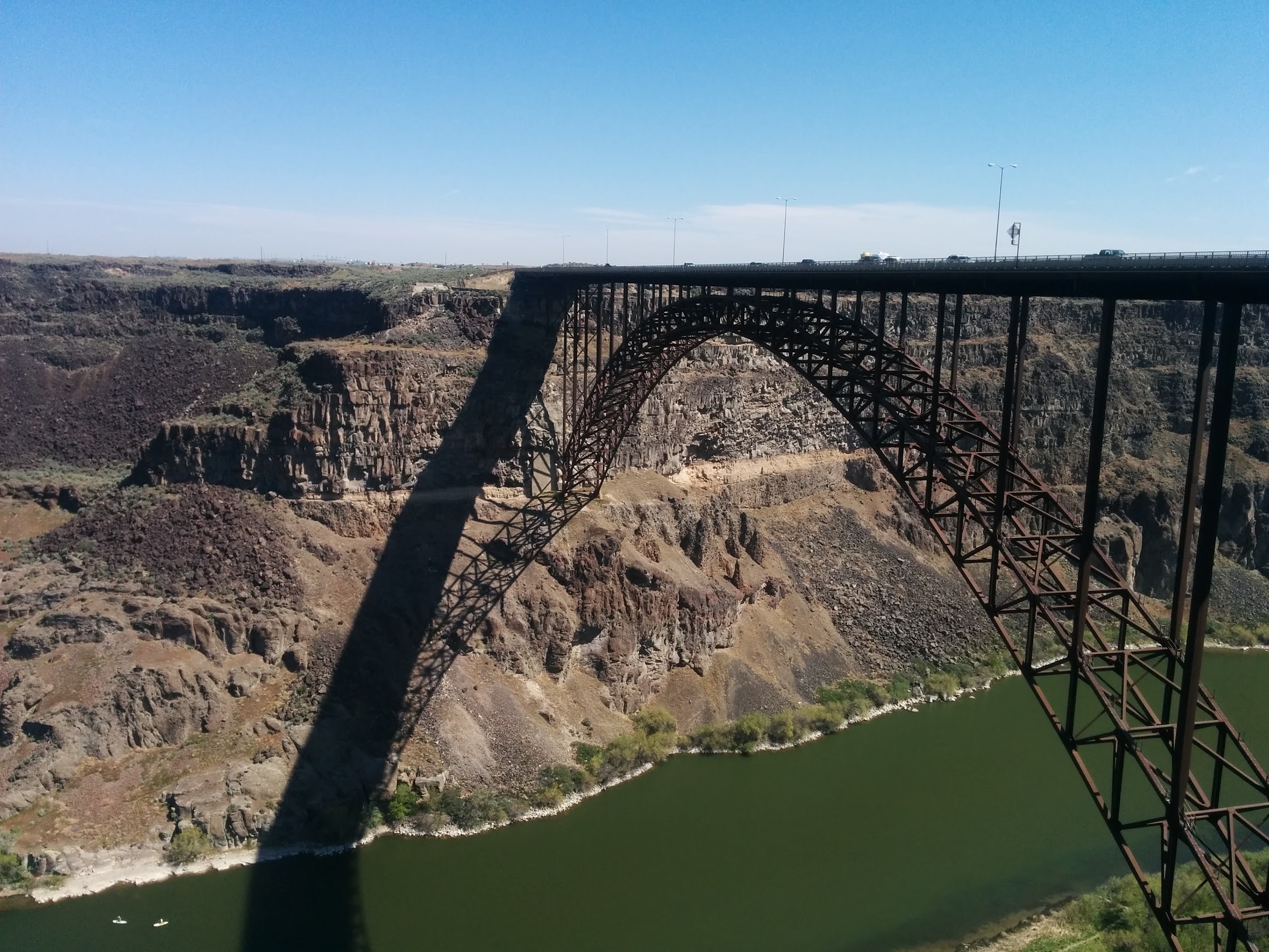 The bridge itself was beautiful. We walked to a viewpoint of the bridge, then stopped inside the Visitor’s Center, a modern building with big windows and interpretive signs about the area. There was a little gift shop as well as a wall full of pamphlets outlining nearby attractions. Lucky for us, there was also a little cart full of free ice cream cups from the folks at Coldstone Creamery. It was some sort of promotional thing, a delicious, delicious, promotional thing. Even without the ice cream, this would have been a worthwhile stop. 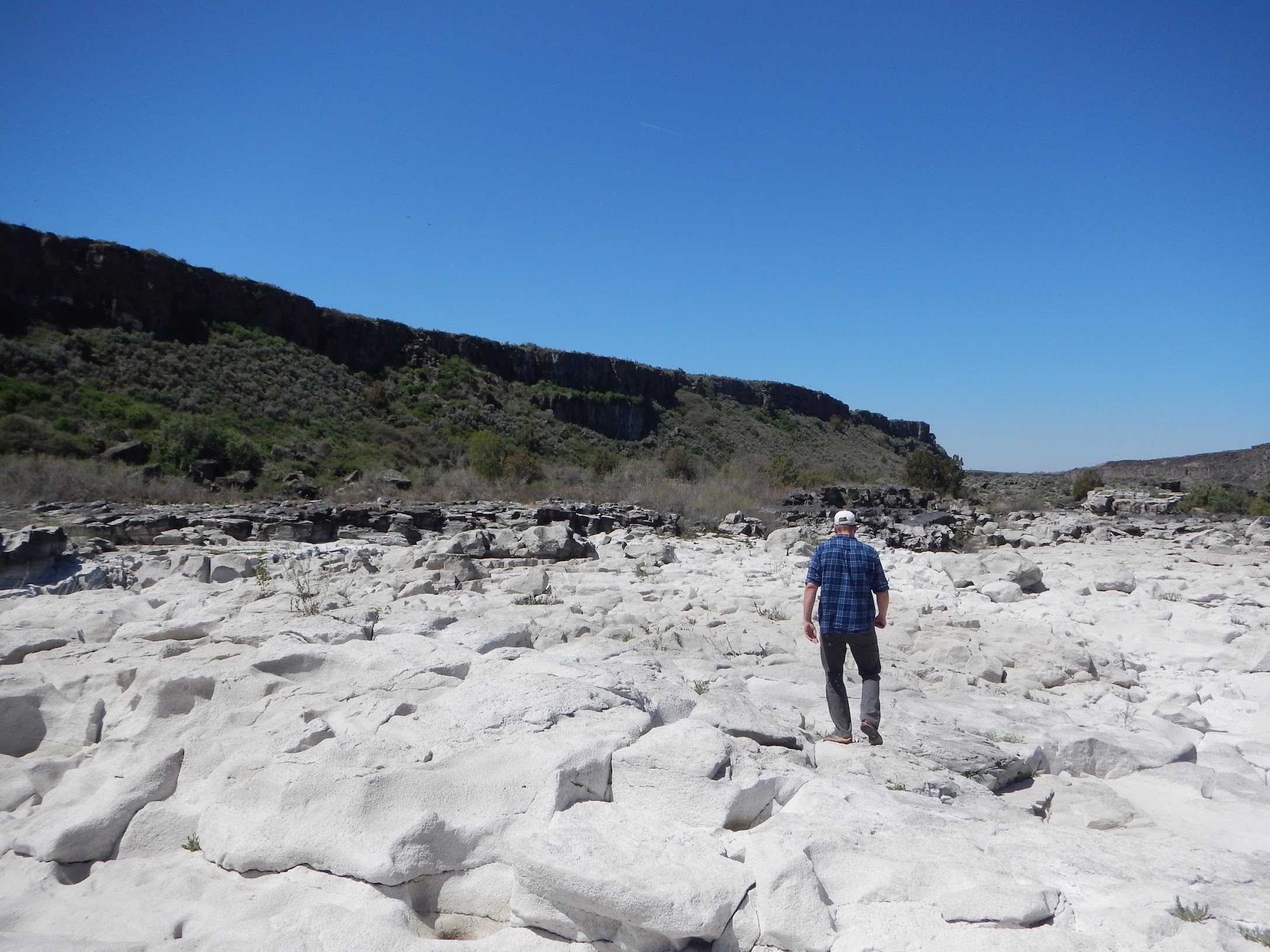 There is one type of map symbol that always grabs my attention: Unique Natural Feature. This symbol looks like a fan with four blades (see above map) and it corresponds to a key in the front of the book that gives a name and a short description of the feature. One feature that I wanted to see on our drive through Twin Falls was called Caldron Linn. Or Cauldron Linn, depending on what you’re reading. It took some sleuthing to find driving directions to this place. Even the fact sheet at the Visitor’s Center said “inquire locally for directions.” It seemed weird that this place was right outside a major city and its whereabouts were sketchy. I really wanted to go there, and really hoped it wouldn’t be another Pillars of Rome situation.

We found the place without much trouble, although we definitely should not have driven down the last section of steep, scary dirt road. We arrived unscathed and tumbled out of the car to see what this was all about.

The description was something like “a raging fury of churning water that cast early explorers to their deaths as they attempted foolishly to travel downriver.” That’s absolutely not a quote but that’s what I was picturing in my mind as we walked towards the river. Funny, we couldn’t even hear any rushing water. 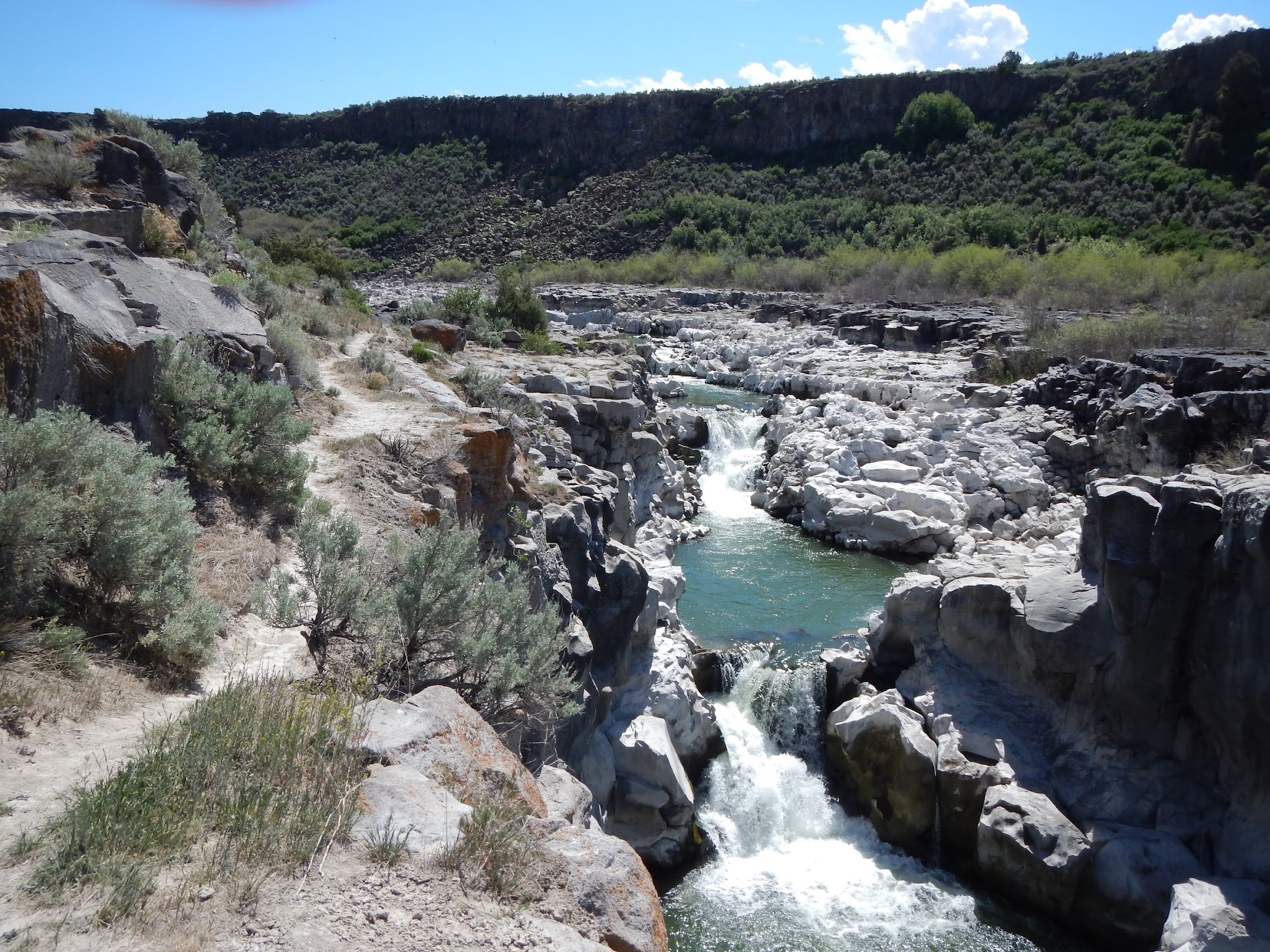 The river was eerily low, which made for a mediocre waterfall but gave us an interesting look at the rocks that are usually covered by water. The bleached white rock looked like a jumble of dinosaur bones piled up on shore. Water pooled in cavities that were bored down into the rock by a more vigorous flow in times past. Lizards sunned on the rock and birds chattered away in the sagebrush. While I was sad that I didn’t get to see the river in its most dramatic state, I still enjoyed the diversion and adventure off the main road. 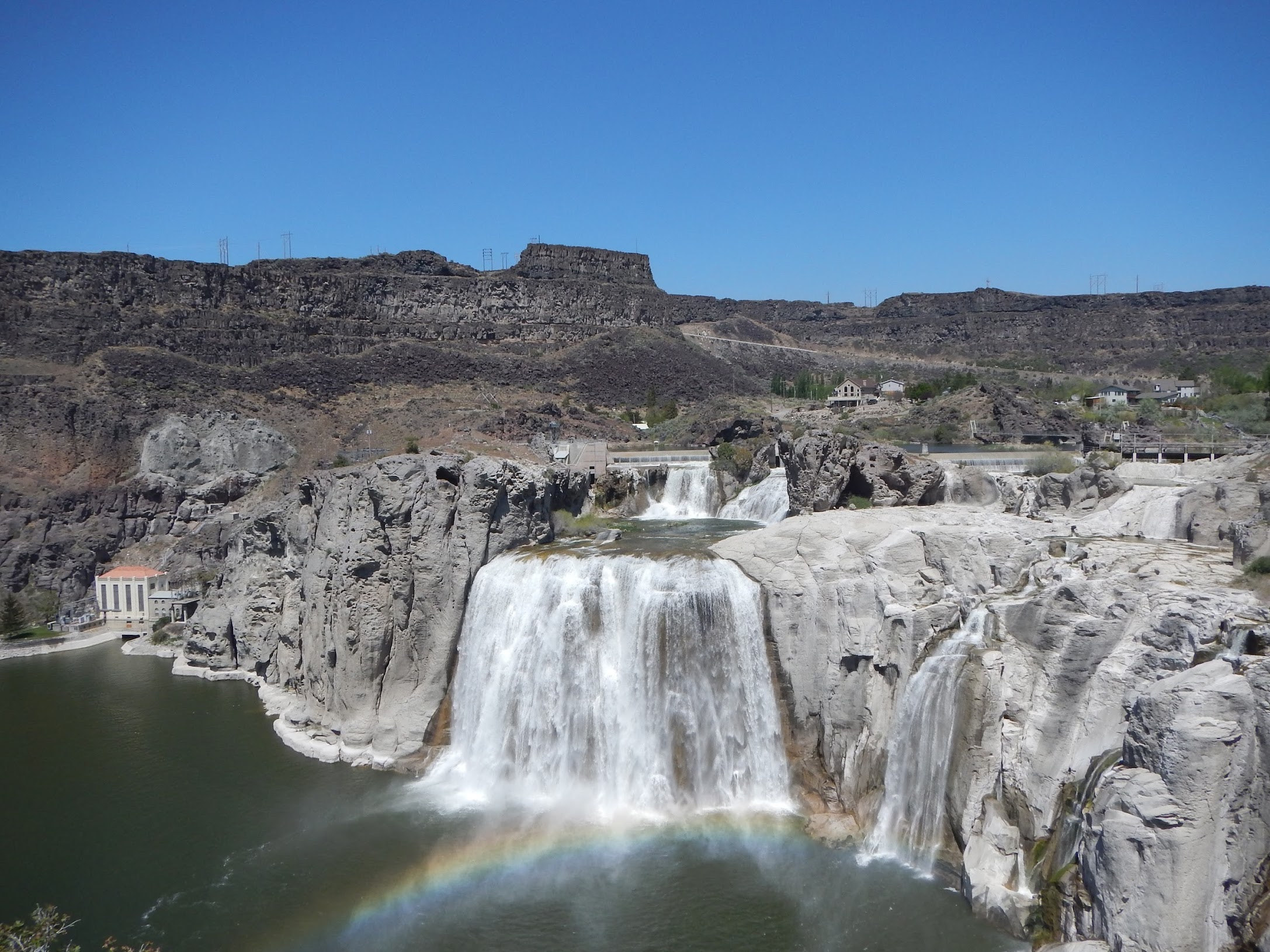 I should not have expected anything different on our next waterfall stop. But, Shoshone Falls was nicknamed the Niagara of the West, so it had a bit more credibility than our little Cauldron. We stopped at the falls around lunch time, eager to get out of the car and have a nice little picnic. During our visit to this oversold attraction, the water levels were pretty low, and so it was a pretty disappointing stop. The falls were pretty, but they didn’t earn their nickname and certainly didn’t need to command the crowds that were swirling around us. We got our obligatory couples photo and ducked out of there.

The nearby park was also overrun with visitors but we found a spot on the grass where we could lay out our picnic spread and stretch our legs a bit. Today felt like a lot of driving. It was nice to just hang out and not feel like we had to get somewhere fast. We wanted to experience the last stop of the day after dark, so we were in no rush to get there. 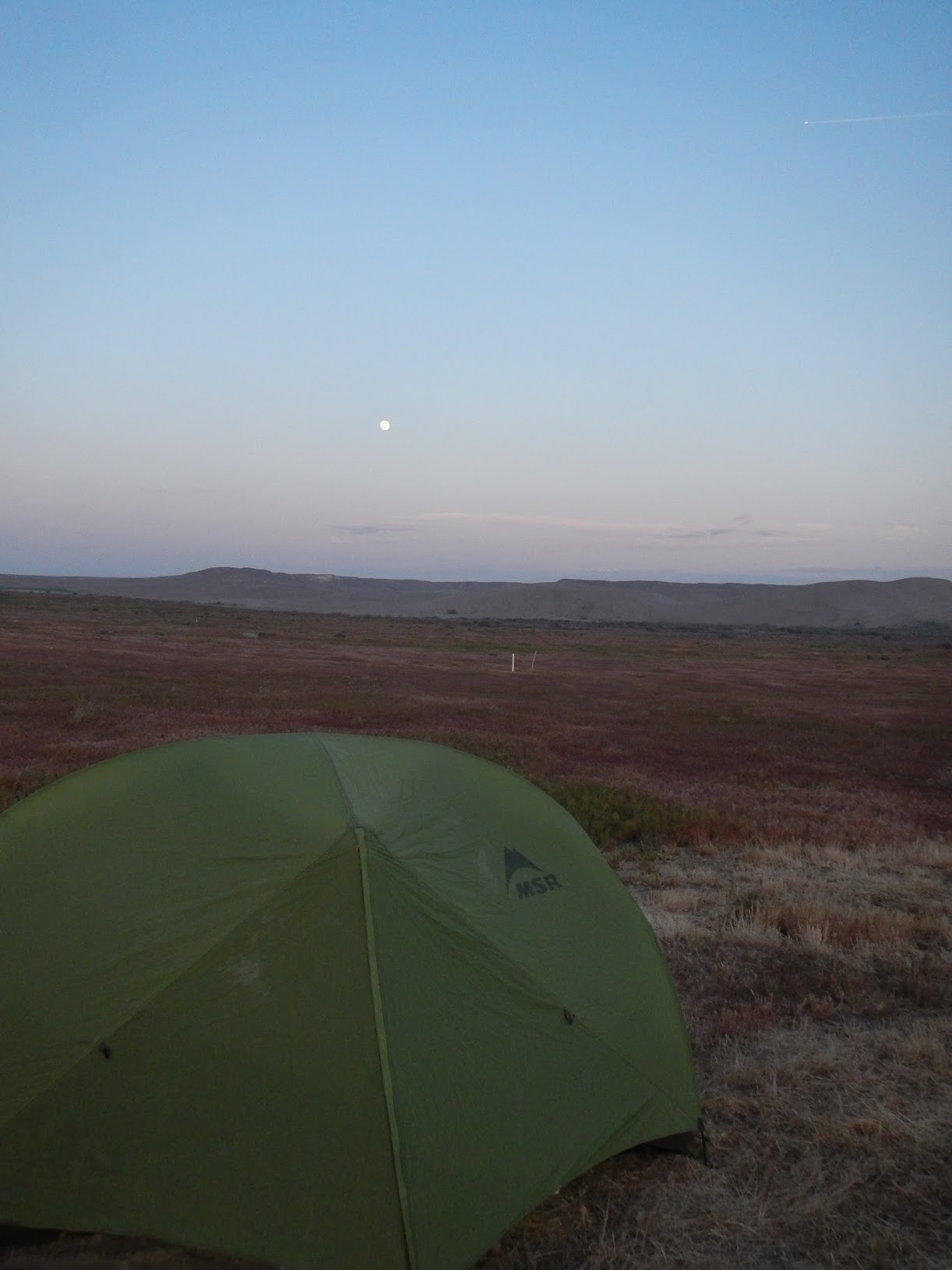 By the time we rolled in to Bruneau Dunes, nearly all the campsites were taken. There were just a handful left in the Equestrian Camp just outside the main park, so we took it. Like Great Basin National Park, Bruneau Dunes boasted of its spectacular night sky program. They even had an observatory with a huge telescope that was open to the public on the weekends. So, we set up camp, made dinner and waited for the sun to go down.

When we finally made it over to the observatory, there were a bunch of people milling around. We got there late. It was dark, we didn’t know what was going on, and it took us a while to figure out how to pay. We dutifully stood in line to wait for our turn to look through the telescopes that were set up outside. Then, we waited in the longest line, the one at the big telescope, just to see a fuzzy cluster of stars half a zillion miles away. Yawn.

What I really wanted to do was hike the dunes under a starlit sky. So we grabbed our backpacks out of the car and set off on what we hoped was the trail we wanted, angling for the dunes.

When I planned this in my head, I imagined it would be like our night hike in Death Valley. But as I am noticing now, my images of reality don’t always match actual reality. 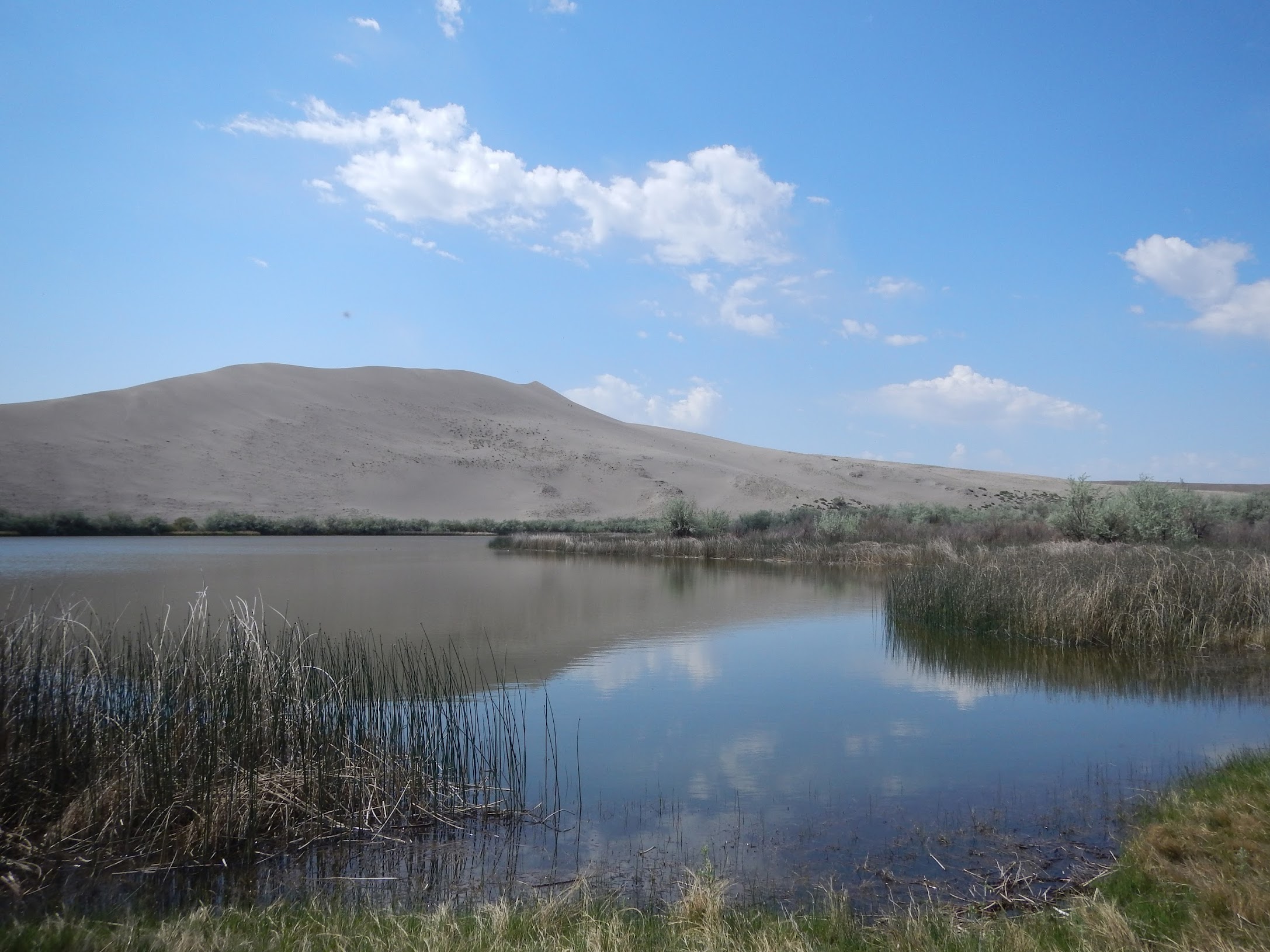 The Bruneau Dunes are an interesting phenomenon. They sit in the center of a semicircular basin, with winds blowing pretty evenly from all sides so they don’t move very much. At the foot of the 400-foot high dunes is a pair of lakes that formed only a few decades ago, after the water table rose due to changes in irrigation practices nearby. At the edge of the lakes, as one might guess, was a tangle of shrubs, grasses, trees, and other water-loving vegetation. That made finding our way to and from the dunes extra challenging.

Once we broke free of the plant life, we began hiking straight up the steep side of one of the big dunes. Right foot forward, slide back, left foot, slide… and on and on. At one point the dune ridge got so steep we had to crawl and monkey walk sideways just to keep going. It was exhausting work. In daylight, perhaps, we could have found a better route. But, we did the best we could.

Clouds covered large patches of sky for most of the night. Occasionally the moonlight would break through a gap in the clouds. 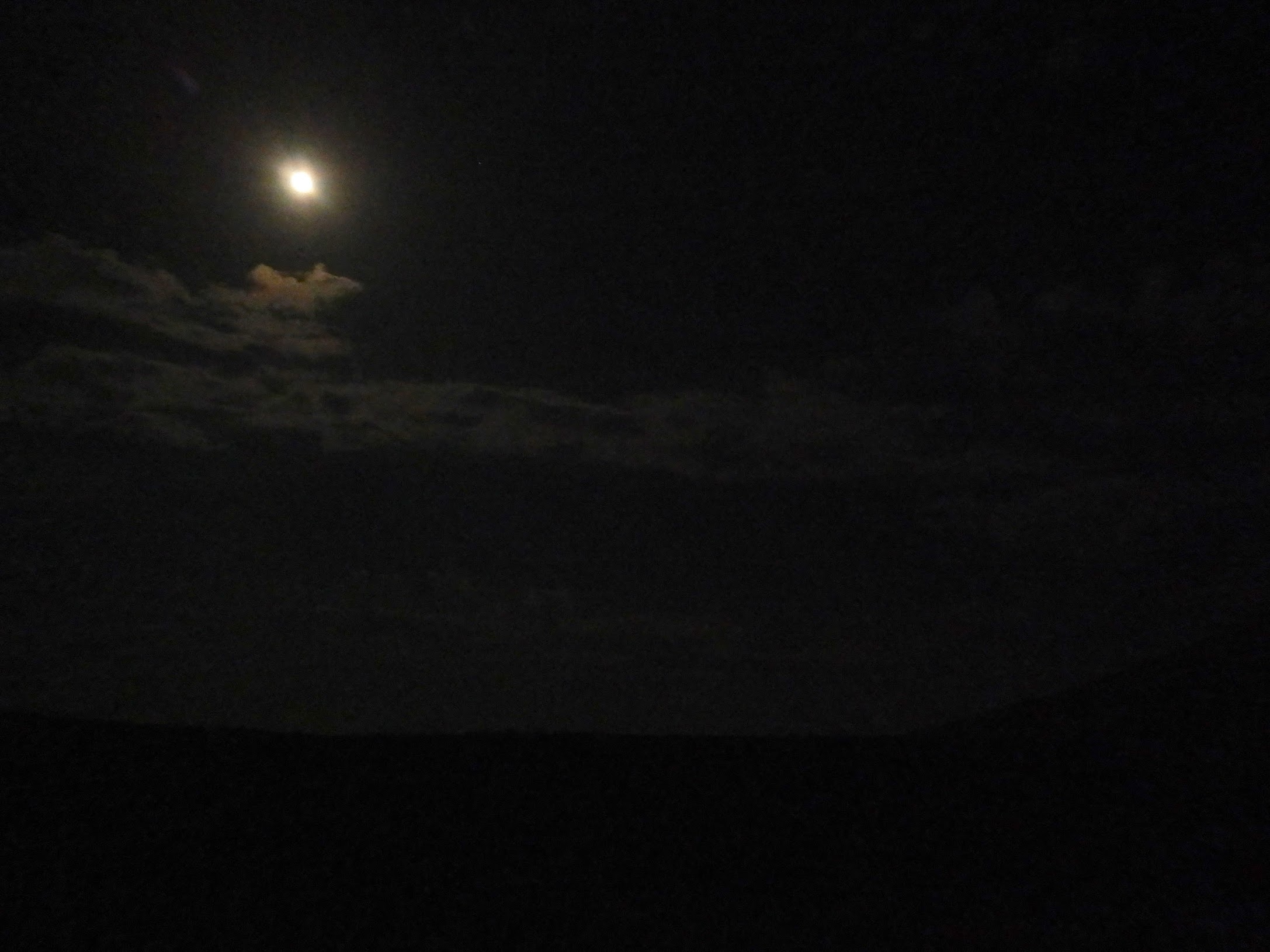 After we walked the entire length of the ridge, we happily ran down the side of the dune and headed for the lake. That was the best part. The worst part was trying to navigate a braided mess of user trails leading every which way through the thick, lakeside vegetation. Eventually we stumbled out on the other side of the water and made our way to a road that led back to the car. Mission accomplished.

In the morning we took a quick drive through of the park to see what it looked like in daylight. It was very pretty, and the dunes were scarred with mobs of tourists hauling their children and sand-boards up the hills. Glad we did the park by night. 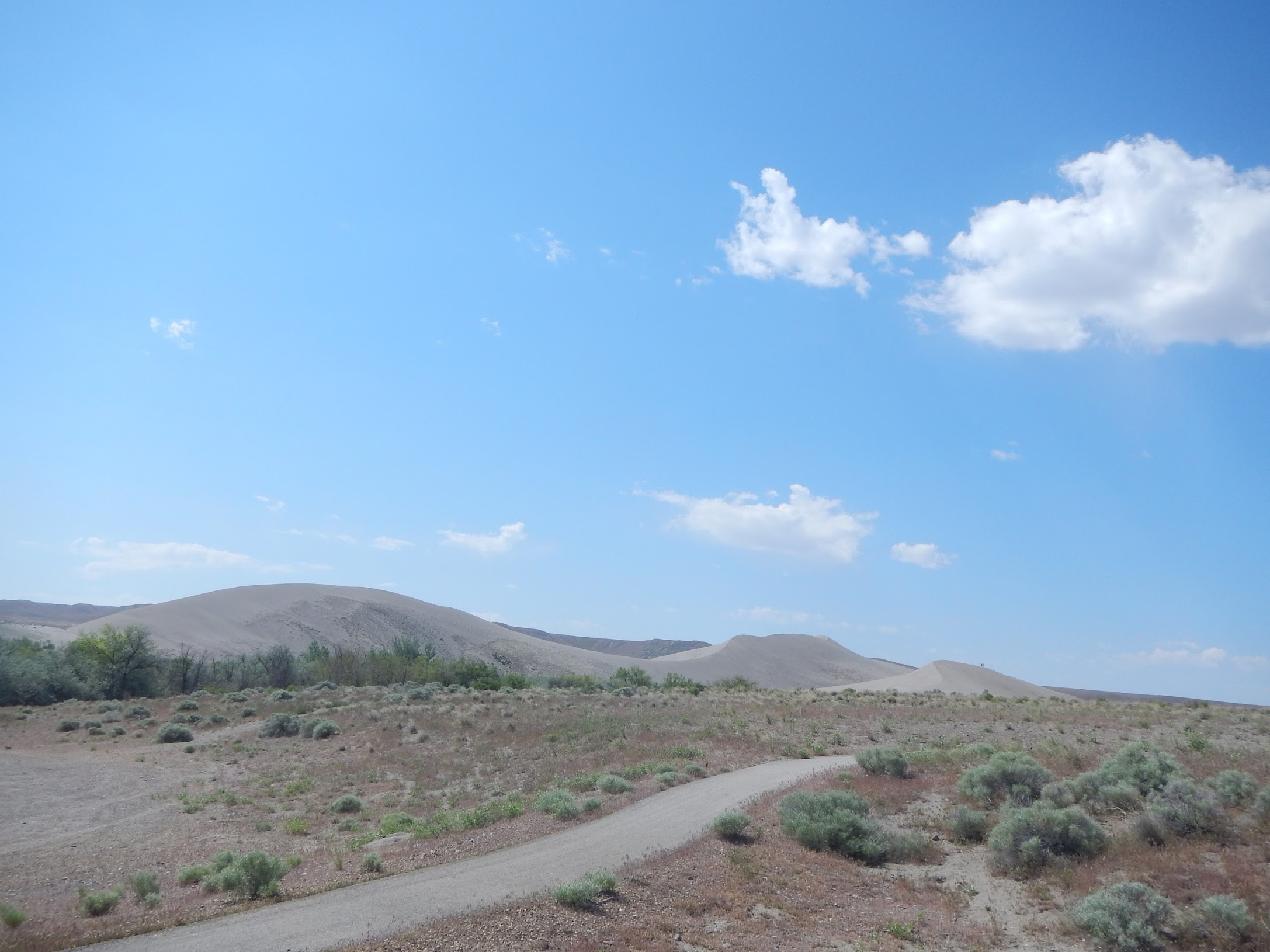 Next up: Eastern Oregon. The grand parks tour was coming, sadly, to a close.