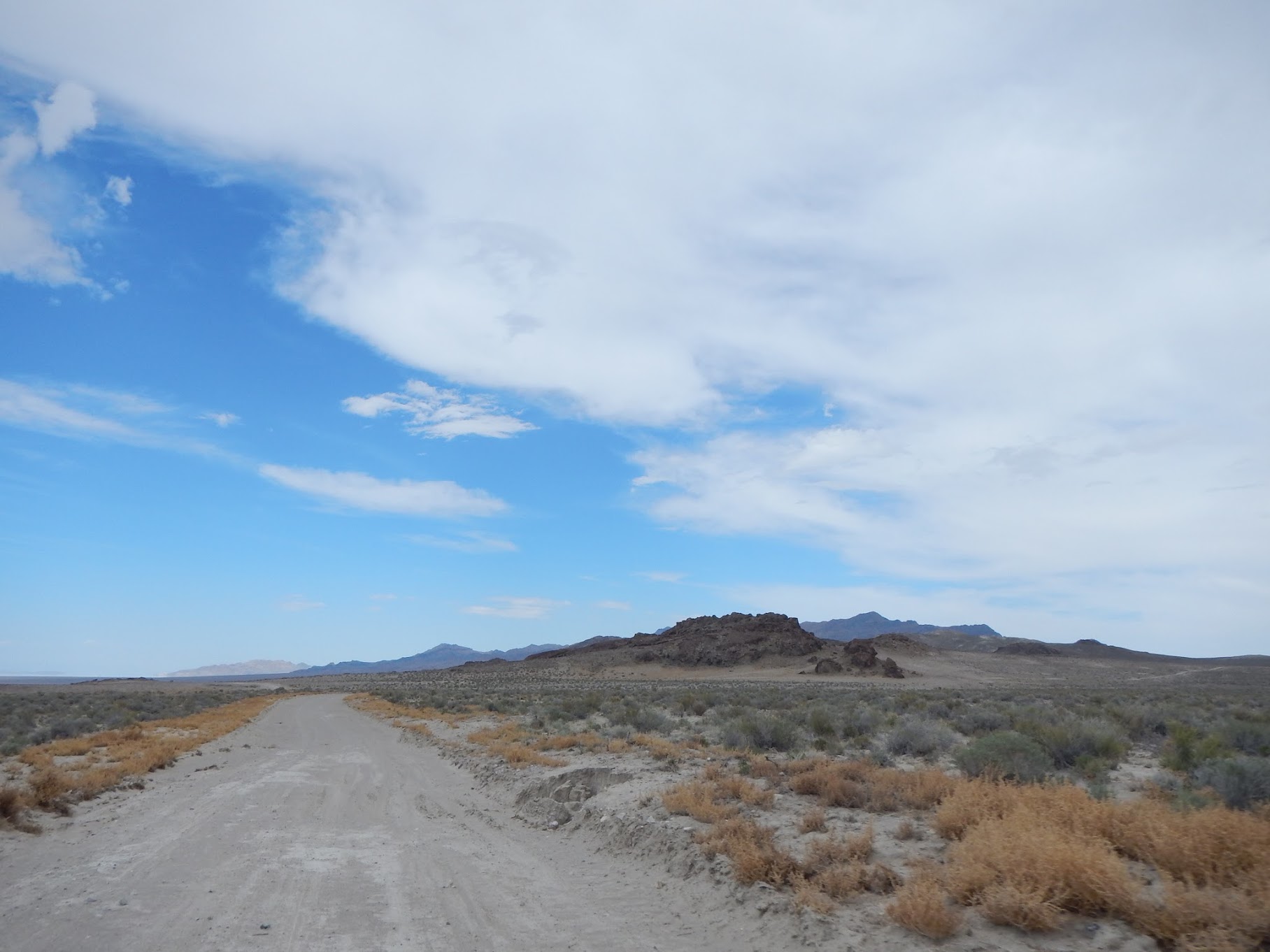 Our last stops in Utah were west of Salt Lake City. When researching possible trip destinations, I noticed that a nice route would take us by the Bonneville Salt Flats, famous for the land speed records set there. Also, as I would later learn, infamous for bogging down the Donner-Reed party in their race against the oncoming winter storms as they headed for California. Just nearby were the Silver Island Mountains, a place I’d never heard of before. But on the map it appeared to be an interesting place to explore.

According to Summitpost.com, it was. So I copied some notes about a few climbing routes and off we went. 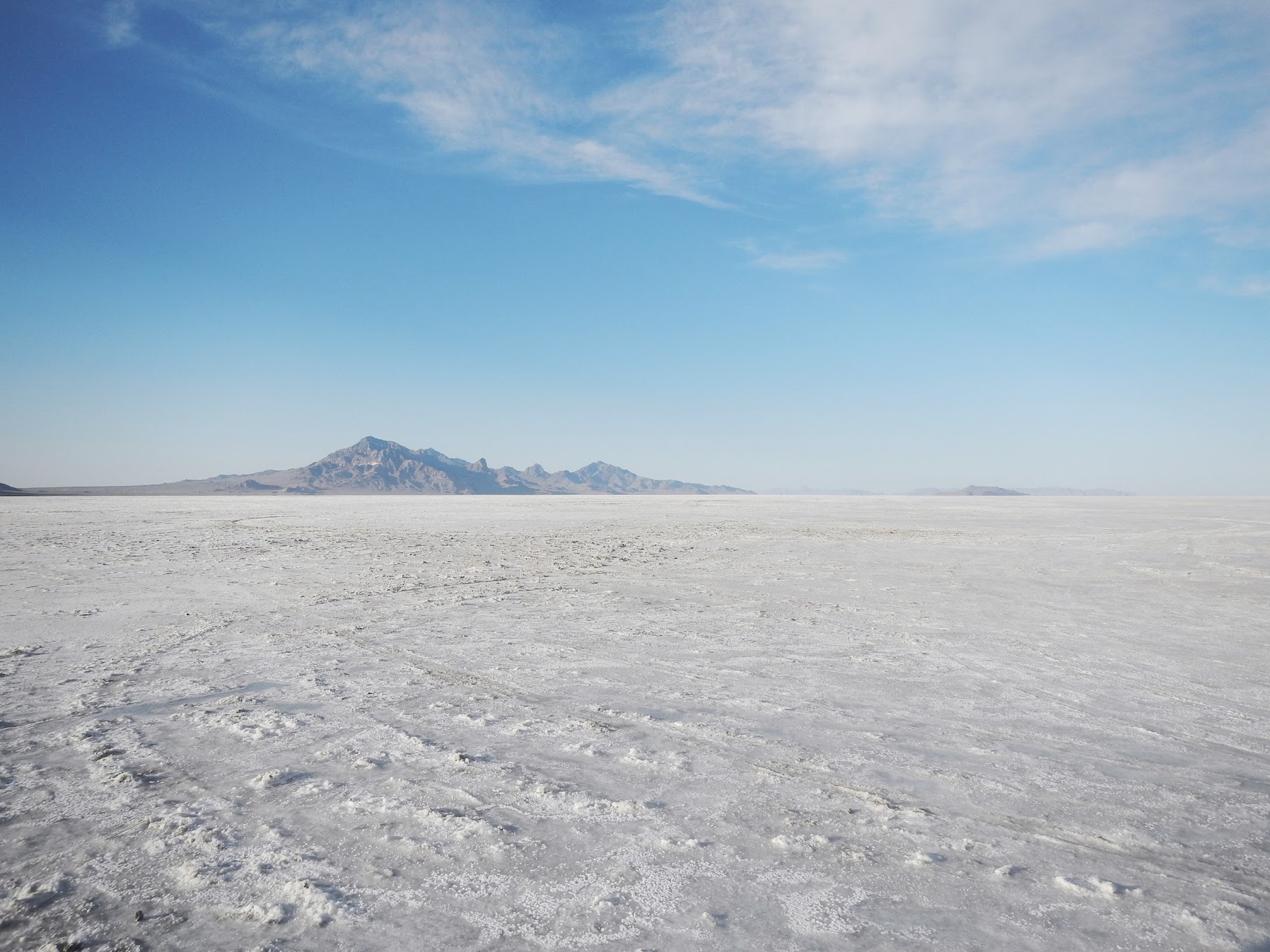 We arrived at the salt flats after a long day of driving. A work crew was setting up a huge tent for some event that was happening the next day (we never found out what it was). But the Wikipedia page mentioned that the Bonneville Salt Flats hosted several races, movie shoots and other events year-round. We parked past the tent-raising and walked out onto the salt. It felt good to stand up after being driven around all day long. Shallow pools of water collected in some parts of the salt flats, which seemed unusual. We carefully walked around on the hard and surprisingly uneven ground, looking for interesting salt formations. We’d been spoiled by the intricate salt statues in Death Valley a few years ago, so this place seemed pretty ho-hum in comparison.

A night under the stars

It was getting to be dinner time and we needed to find a place to camp so we headed to the scenic byway encircling the Silver Island Mountains. It was all BLM land; we just needed to find a nice spot to pitch a tent. 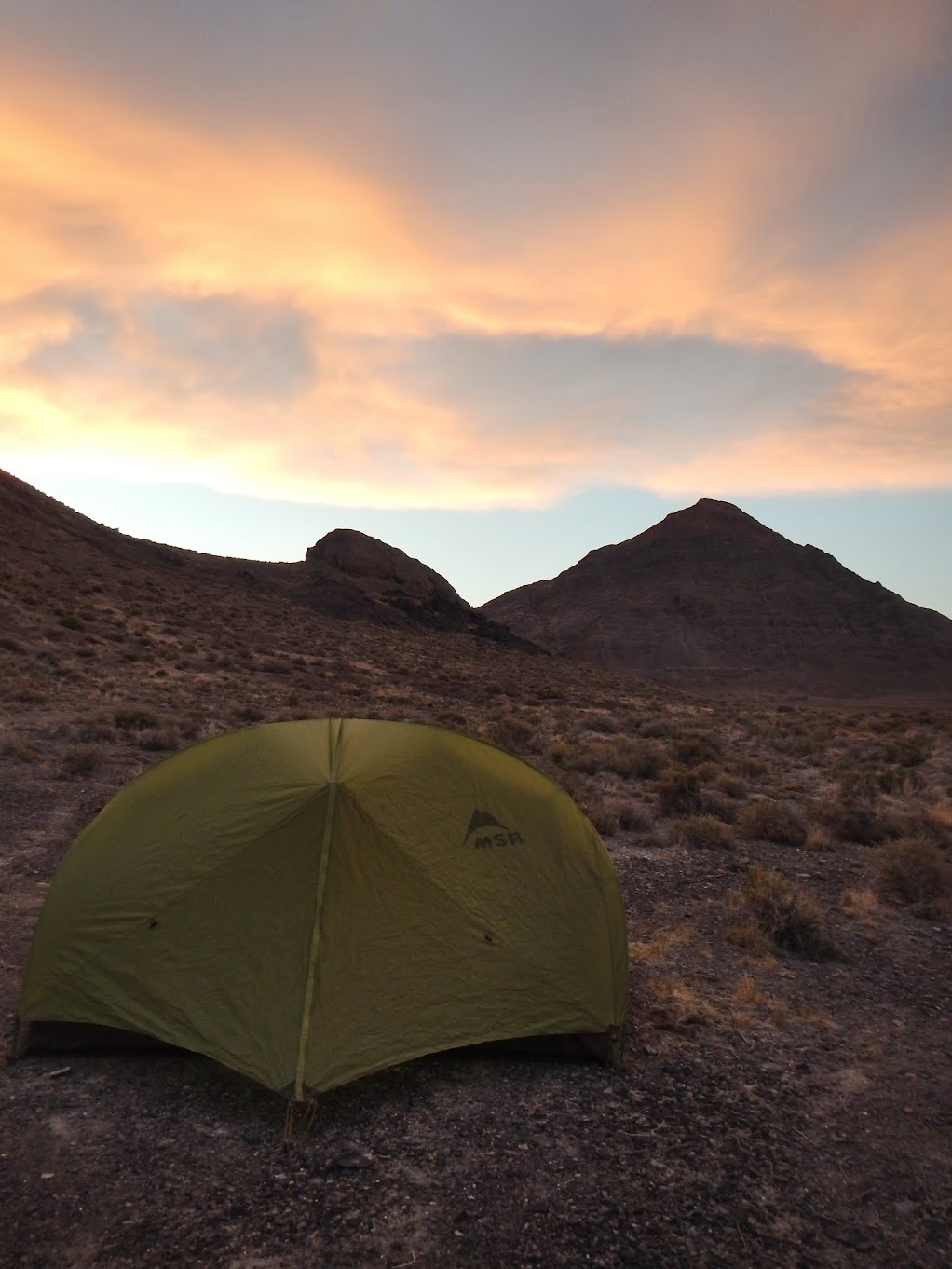 And that we did. We found someone’s old fire ring just a little ways off the main road and decided to stop there for the night. We had an elegant meal of roasted asparagus and Dinty Moore Beef Stew. A camping classic. The dramatic sunset over the mountains behind us made it worth all the day’s driving. Although we could see the traffic buzzing by on highway 80 far off in the distance, it felt as if we were sitting in a remote getaway. 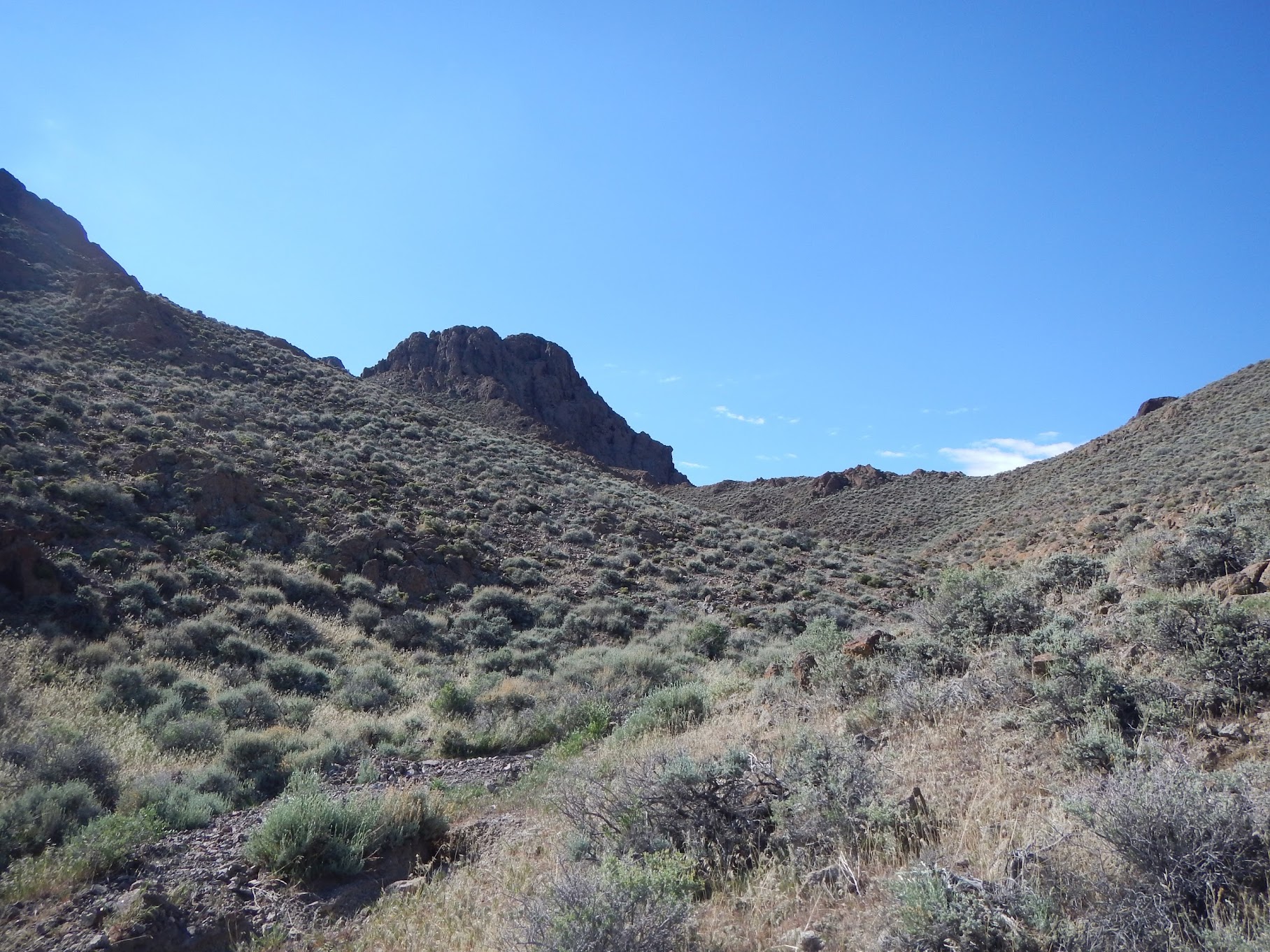 The next morning, we awoke to a spectacular sunrise and then headed off to our first destination: Volcano Peak. We did our best to follow the description of the drive to the recommended route, stopping a few yards short due to rough road conditions. The climb was straightforward: follow a gully to a ridge, stay to the left, and then head straight up from there. It took us less than 45 minutes from car to summit. The mountain was made up of interesting rocks with streaks of colorful minerals. We poked around for a few minutes until I stopped in my tracks. 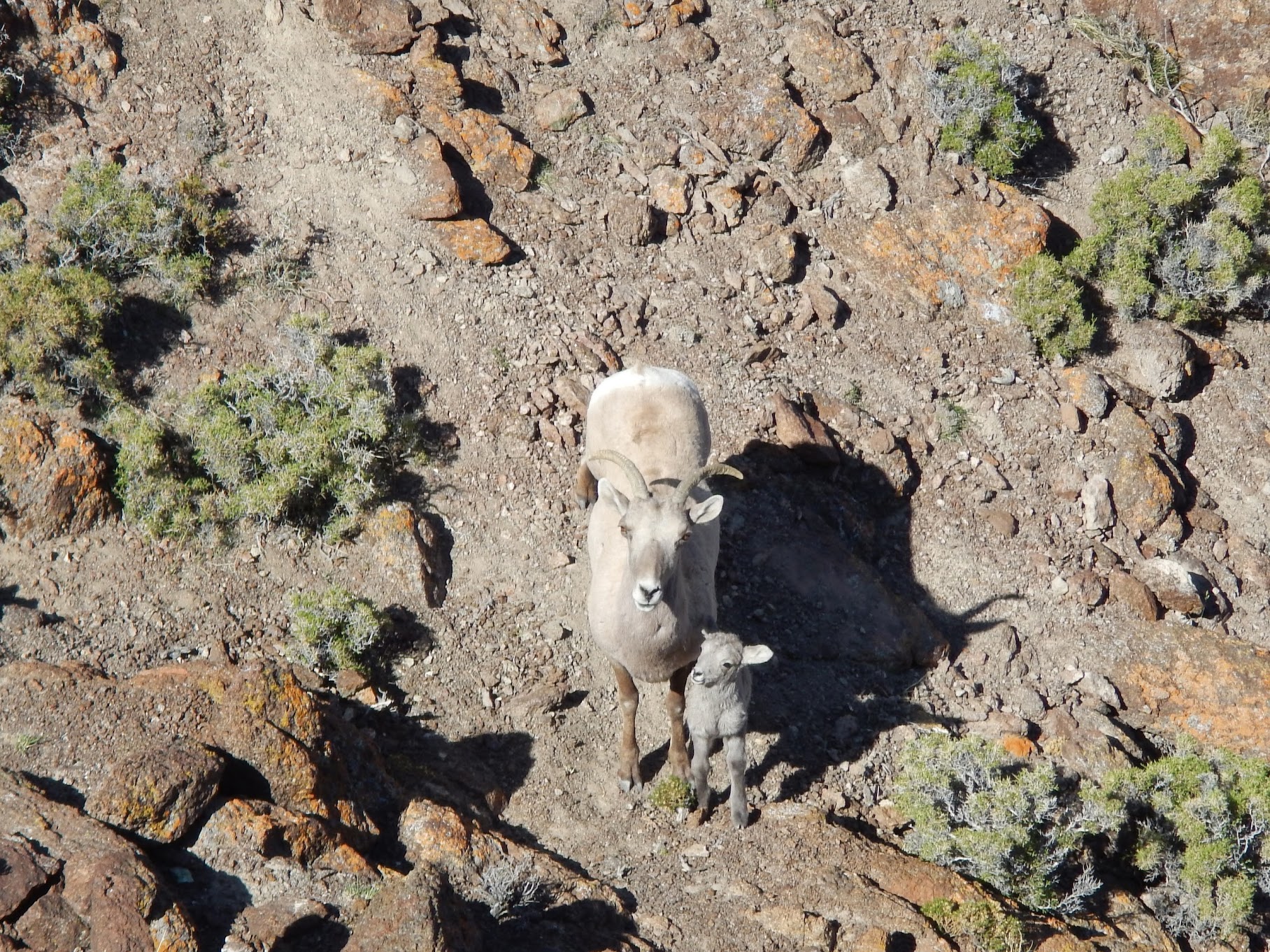 I yelled over to Aaron. Two bighorn sheep were standing on a ledge just below me. The mother sheep’s eyes locked with mine as her tiny baby bounced around her feet. The baby was adorable; the mother terrifying. We watched them as they held their ground on the ledge, and then they decided to retreat to a safer place elsewhere on the mountain. They remained visible from our summit perch, so we spent the next half hour watching them do their sheep thing. 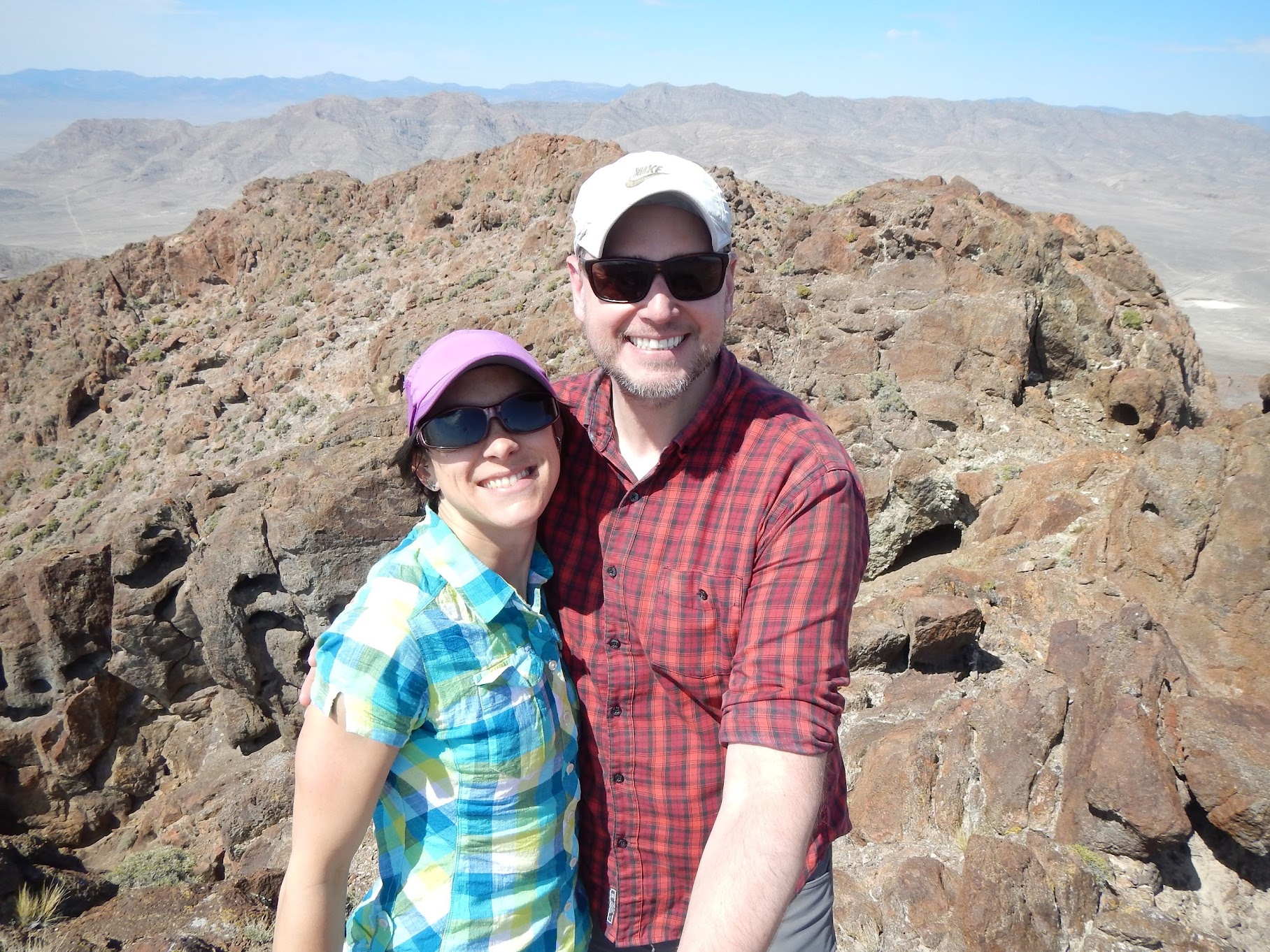 It was so quiet up there. Never had 45 minutes of work felt so rewarding. But, we had one more peak to go, so eventually we took our parting shots and tromped back to the car. 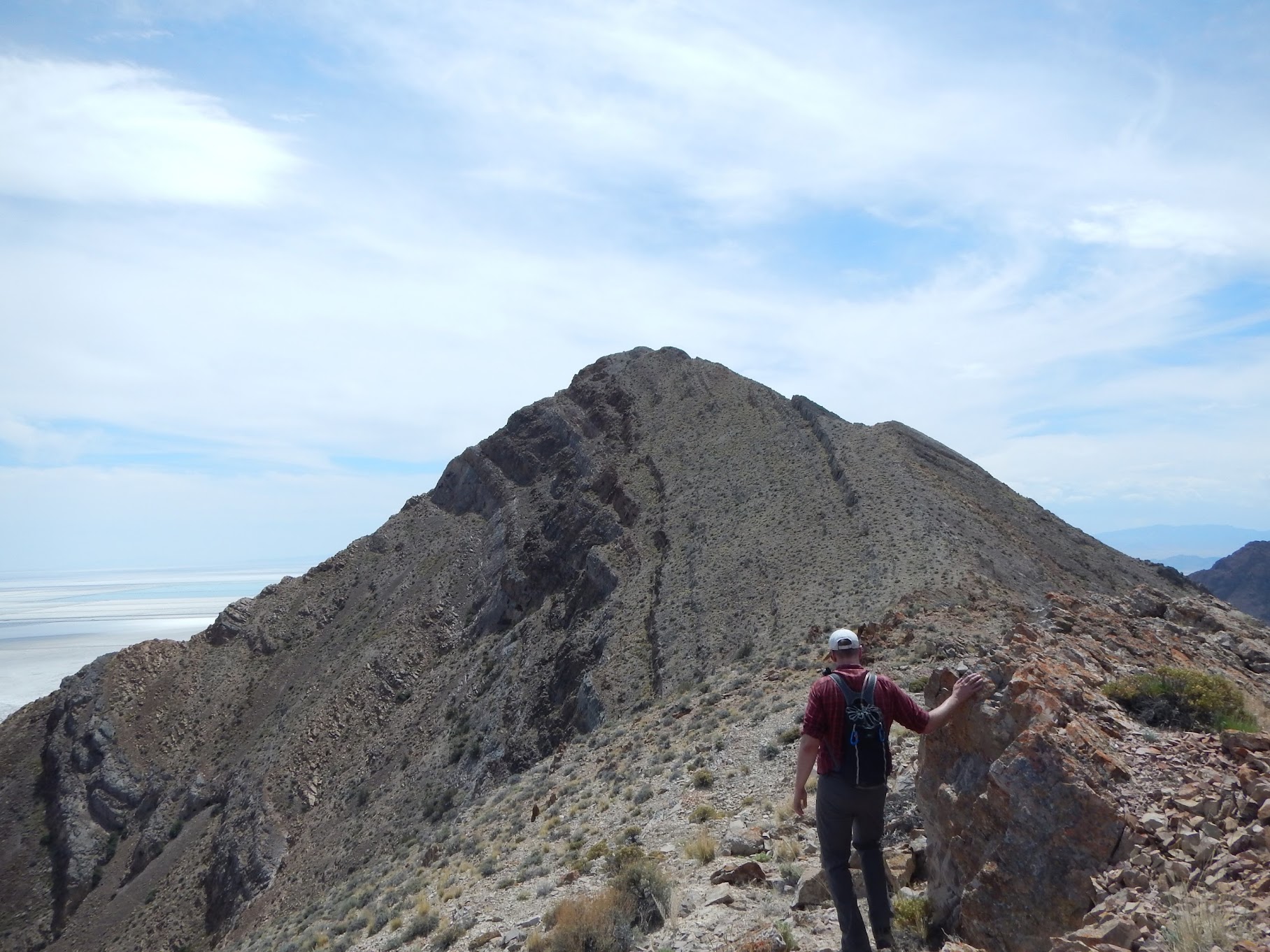 Next in line was Rishel Peak. We could see it clearly from Volcano Peak, but it was less clear where the Summitpost author wanted us to start this next route. We made our best guess, parked the car adjacent to a rough dirt road, and started walking. All we had to do was get close enough, pick a good line, and head up the mountain. Out here, routefinding was easy. You could see the entire lay of the land from nearly every point on the land. There were no silly trees in the way.

There was evidence of human activity along the way. Old, rusty bits of metal, broken glass, and other items lay on the desert floor, cast away decades ago. But we didn’t see any other humans out here. There were plenty of lizards to keep our attention. They were fast, scurrying away quickly when we got anywhere near them. 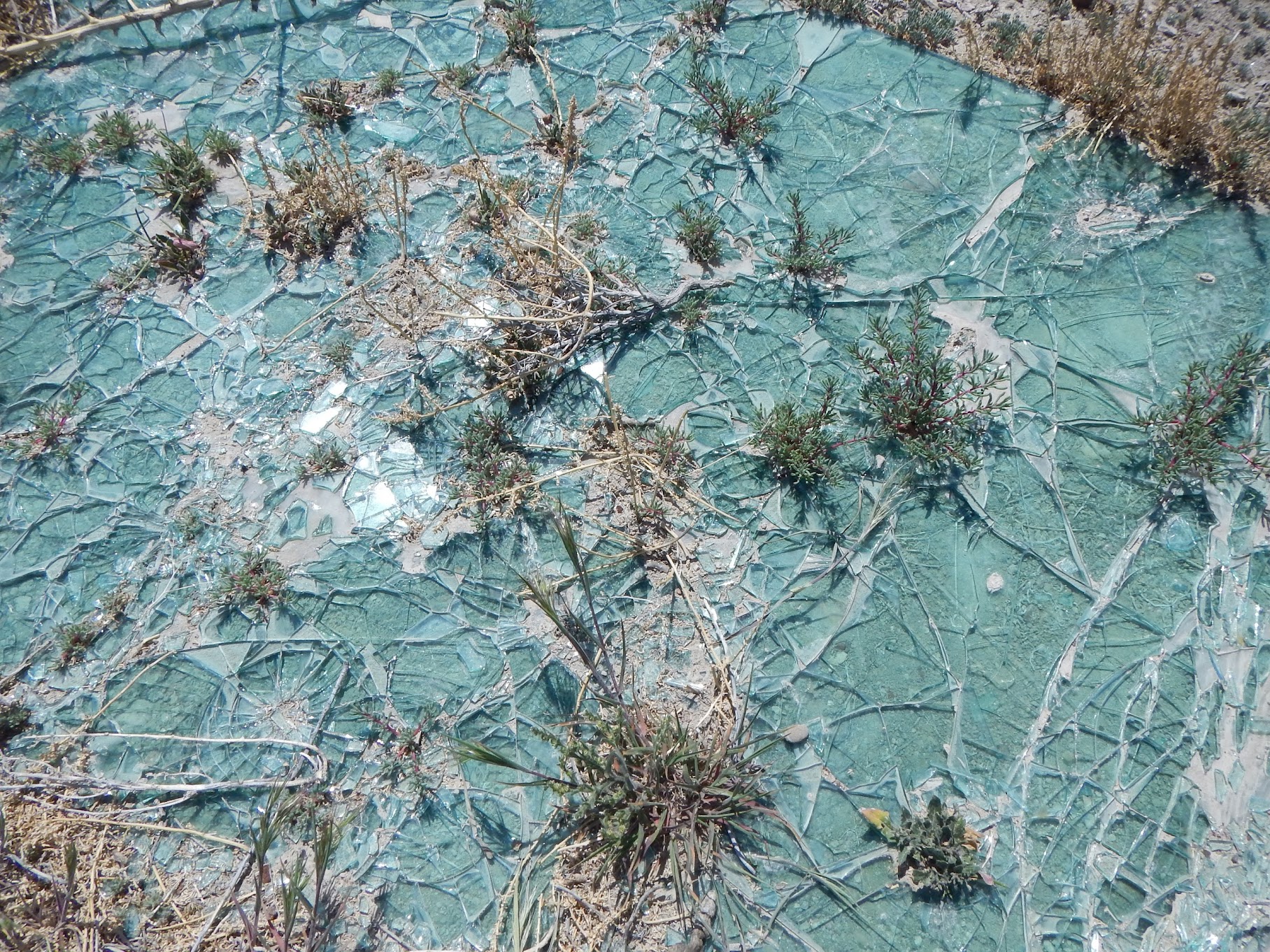 This route was much more of a gradual climb. We wandered across a flat, brushy plain, then snaked up a broad ridge punctuated with rocky outcrops. Eventually we popped up on the main summit ridge and followed it until we couldn’t go up anymore. Views were killer, just like on top of Volcano. In our poking around we found some old telegraph wire and wondered what the stories this peak held. The clouds seemed to be thickening and turning grayer, so we descended with the intention to move a bit more quickly. They never turned into storm clouds, but it was better to be safe than sorry. 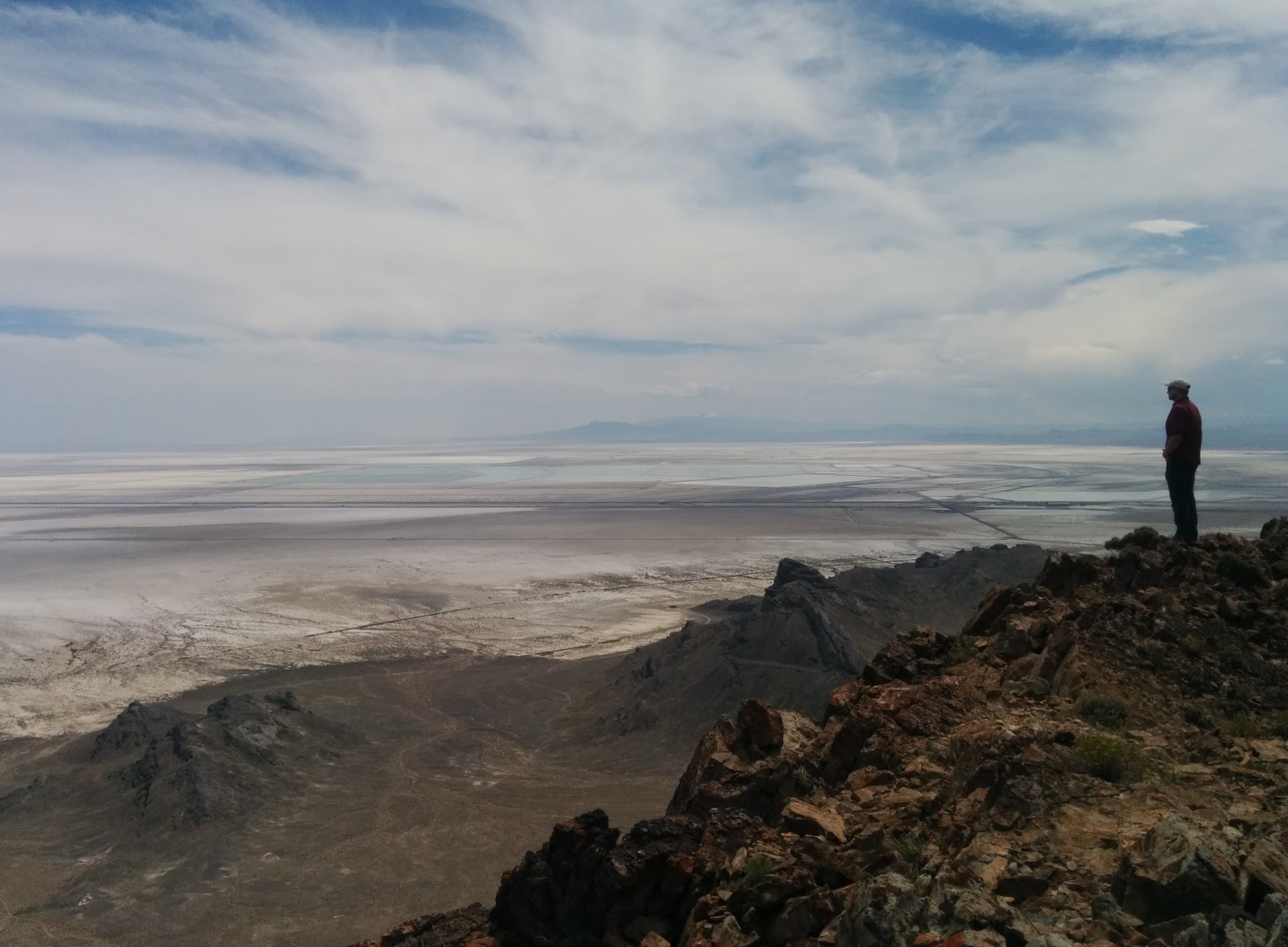 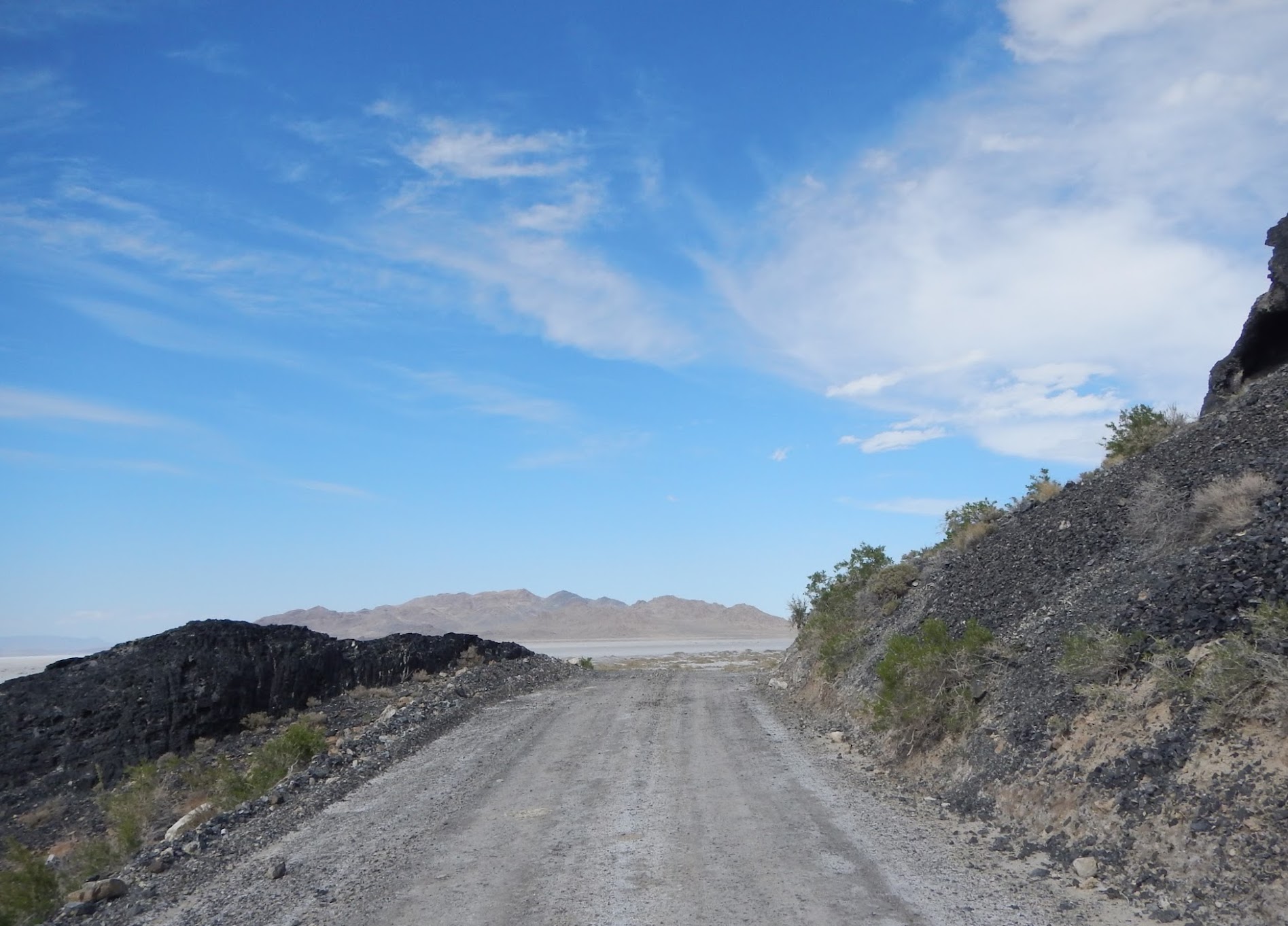 The scenery was stunning, of course. Each section of the drive had a slightly different perspective of the area. We got great views of Pilot Peak, just across the border in Nevada. We also eyeballed all the other mountains in the range we didn’t get to climb: Graham, Tetzlaff, Cobb, Jenkins, and others. Next time we head to Salt Lake… 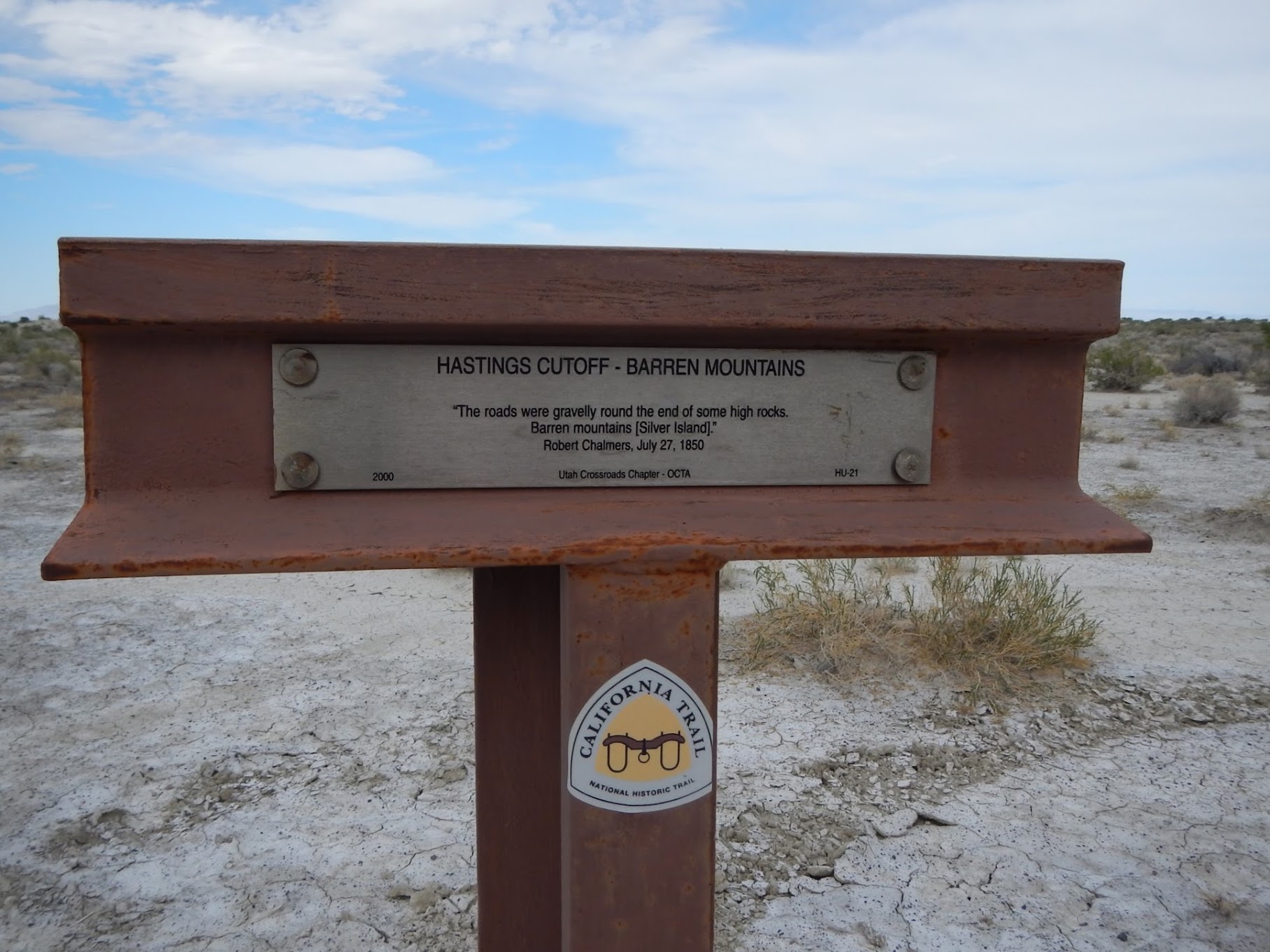 The road just went on and on. Along the way we passed a couple of road signs indicating that we were crossing the Hastings Cutoff on the California Trail. This was where the Donner Party took a tragically long short-cut that ended up getting them stuck in winter storms in the Sierra. We marveled at just how harsh the life of the pioneers must have been, munched on some chocolate covered almonds and turned up the AC.

That night we headed for the border. We drove through the little casino town of Wendover, NV and started north for Idaho, with the intention of camping somewhere on BLM land. Somehow we got talking about hot tubs and buffets and decided to book a room in the next casino border town. There was only one room left on this Friday night and we grabbed it. We gorged ourselves on crab legs and other buffet goodies, and got one hell of a night’s sleep on an actual bed, the first we’d laid on in weeks.