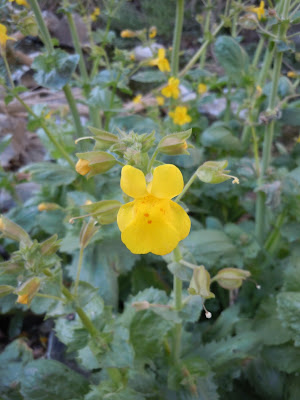 I know, if you look at a map it’s pretty random which things we connected in a day. But we headed to Death Valley with just a rough plan and plenty of wiggle-room to make last minute decisions. This way we were able to get a feel for the place without feeling stuck to a rigid to-do-list. Today felt like the most random of them all.

We began on a hunt for Fall Canyon, which failed miserably due to a poor guidebook description and associated map. So, we settled instead on Titus Canyon since it began from the same parking lot. A one-way dirt road runs through Titus Canyon, which is open to car traffic–although we didn’t know it at the time. 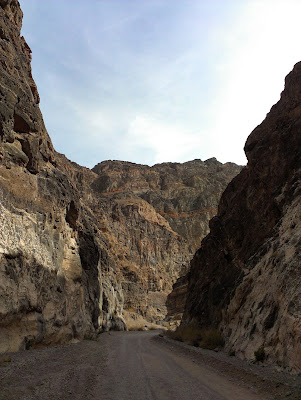 We began walking past the gate, which led into a wide canyon with steep walls on either side. The guidebook we had described this as a “slot canyon,” but I’d say that was a very loose application of the definition. While the walls were sheer and dramatic, the canyon floor was broad and gaping. A well-graded, nicely manicured gravel road led us along the way.

The canyon was pretty, with imposing walls made of interesting rock types. Parts of the wall looked like it had been sprayed liberally with clay. There were wildflowers, birds, and the occasional vehicle blazing down the road. That was the worst part of all. Cars, trucks, and SUV’s came ripping around corners, forcing us to get off the road/trail to let them pass. How obnoxious. What surprised me the most was how fast most people were traveling. Considering the number of hikers on the road–including several older people with walking sticks, children, etc., the drivers were not proceeding with much caution.

Once the canyon opened up a bit and we got sick of cars, we turned around and headed back. This is a canyon to be skipped if you are traveling on foot. There are much better options for hiking. The park should close this down to hikers if they are going to permit vehicles to travel the road.

Darwin Falls: An Oasis in the Desert

Darwin Creek is one of only a few permanent water sources in Death Valley National Park. We drove to the other side of the park to check out this highly recommended destination. The hike is only 2 miles round trip, which gave us ample time to poke around and take a look at the diverse array of plants and animals. 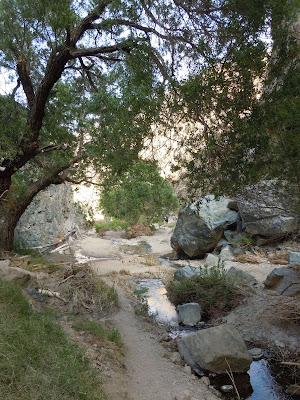 And poke around we did! As soon as we left the parking lot, we noticed something was different. There were lush green shrubs and flowers aplenty. A trickle of algae-packed water ran down the canyon. Birds sang joyously, as if to say, “look what we found!” We walked ahead slowly as I stopped to photograph every unique wildflower that was there. Frogs sat lazily in a small pool formed by the ever enlarging stream. As we continued up the canyon we occasionally got our feet wet as we hopped across the narrowest parts of the water. What a drastic change from the past few days!

There were a bunch of people milling about near the base of the falls, including one large group who were downclimbing some slabby, exposed rock just above the pool. I knew there was a way to get to an upper viewpoint, but surely that was not the way. For the first time, the book had a reasonably good description of where to look so we backtracked a bit and began scrambling up some rock and gravel, getting away from the crowds. This was the first time I had to swap trail shoes for Crocs, since I didn’t quite trust them on the steep rock. 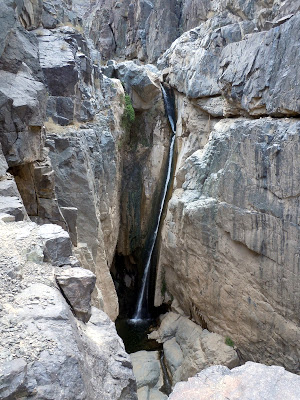 The upper viewpoint was killer. We ended up on a rocky platform with an excellent view of the main falls, a thin stream of water dropping eighty feet down to the water-carved rock below. No one was here. We savored this moment for as long as we could, taking pictures, noticing all the cactus growing straight out of the rock on the opposite side of the canyon, and watching the sun drop lower in the sky. Upon leaving, we noticed some huge raptor nests in the cliffs just over our heads. This was a very special place.

The walk out was probably no faster than the walk in. This time, I was distracted by cactus. See, in wet, Western Oregon, cactus is like a thing that only exists in cartoons. I never get to see real, live cactus–the potted plants from the grocery store don’t count. Here, cactus grew wildly. The more I looked, the more I found. It was like a spiny Easter egg hunt, and it was really fun.

We decided to treat ourself to dinner tonight since we had a long drive ahead to Eureka Dunes. So we took another one of Joel’s recommendations and went to the restaurant at Panamint Springs Resort. The place was packed, and there were only two people working the entire bar and restaurant. Once we ordered beverages and food, however, the service was very friendly, prompt and accommodating. They had an incredible beer selection and I was happy to drink down a local, private label Hefeweisen that was distinctive and delicious. The BBQ burger that followed was also very satisfying. We left with full bellies and some tips on getting out to the dunes.

Long story short, we didn’t arrive at Eureka Dunes until nearly midnight so I’ll leave that part of the story for the next blog post.