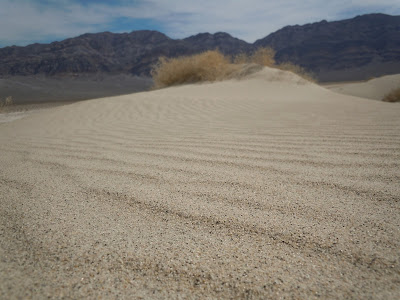 The Eureka Dunes are the second largest sand dunes in North America. We arrived under a full moon around midnight. Getting out of the car was a shock; the air temperature was about 50 degrees. Time for the puffy coat.

We set up camp at the first campground we saw. Three other sites were occupied. This was the most remote campground we’d found at the park. After quietly setting up our camp, we packed our bags and started walking towards the dunes.

Hiking under a full moon was an eerie yet beautiful experience. Here we were, in a place we’d never been, exploring it for the first time with no map and a vague impression of hills and shadows. We knew the highest dune was 700 feet tall, and that’s where we were headed. As we walked along the base of the dunes, we tried our best to sidestep the small desert plants growing there. Keeping our eyes on the highest visible point, we turned around occasionally to track our progress and relative direction from camp.

Walking up the gentle ridges and slopes made of sand was arduous work. The sand slid beneath our feet, making every step feel like three. It was difficult to judge steepness and distance with the dim light. I quickly warmed up and shed layers as we proceeded up the hills. Although my core was warm, the sand was ice cold so I had to keep moving to heat up my feet. 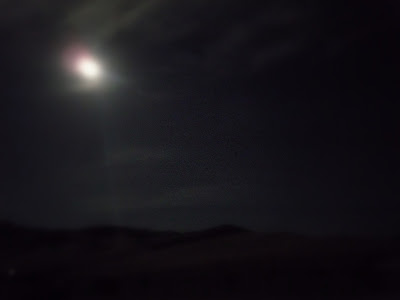 Atop the grandest sand dune, we stopped to look all around us. There was a ridge leading out towards the opposite side of the dunes that looked like it might be a little taller, so we ventured out there. Several bumps later we arrived at the end of the ridge, which dropped down to the dry lake basin several hundred feet below. Here we determined our turnaround point, where we sat for a long time. The adjectives needed to describe how I felt in those long moments have yet to be invented. It was at once surreal, mysterious, serene and blissful. We snacked on gummy dinosaurs as we tried to express to each other just how awesome it was to be there, in the moonlight, together. I’d say this was one of the most unusual and memorable hikes I’d ever had.

Eventually we figured we had to get back to camp, so we walked back, trying to avoid any unnecessary hill climbs as we did so. We investigated several clumps of plants and noticed the funny illusions the moon shadows made as we walked. Back in camp, I fell quickly into a deep and satisfying sleep.

Seeing the Dunes for the First Time

The next morning we woke up to bright sun reflecting off the mounds of sand outside camp. We reluctantly got up after only a couple hours of shut-eye, and I promptly made a huge breakfast. We dallied a bit around camp before going for a short daytime hike in the dunes. 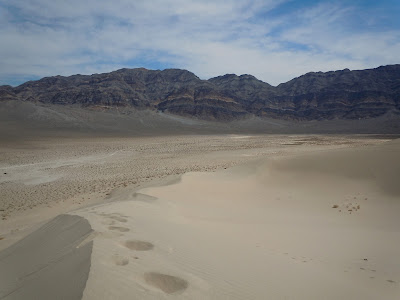 The highest point? Been there, done that. Instead we took time inspecting the vegetation, looking carefully for endemic plants and unique flowers. We noticed lots of animal tracks from birds, mammals and reptiles. Instead of heading for the large dune like everyone else, we explored some of the smaller sand piles–arguably more tiring during the morning heat. It was a pleasant way to kill time in the morning. I was astounded by the views in all directions. I could see the single dirt road leading into Eureka Valley, as well as the rippling striations in the surrounding mountains. Footprints led in several different tracks up the sand dunes, with many people walking along the tracks we made last night.

Take a look at the wide open spaces at the Eureka Dunes:

Hiking around Eureka Dunes was the exclamation point that punctuated our trip to Death Valley. We headed out before noon and mentally prepared for the long stretch of driving ahead. We made a quick stop at Scotty’s Castle, which turned out to be a great place to sit and eat a picnic lunch.

Beyond that, we drove almost nonstop through stunning Central Nevada, where we stopped at Mill Creek Recreation Area to camp. This free, tent-only camp was one of the loveliest I’d ever seen. A thin stream babbled along behind our campsite. There were clean pit toilets available, nice fire rings and picnic tables. Plus there were mountain views in every direction. We were the only ones there that night.

I was utterly inspired by Death Valley. This beautiful and desolate place should be on everyone’s bucket list. If you do go, make an effort to get at least a little off the beaten path. Just be sure to bring a gas can with a few spare gallons.