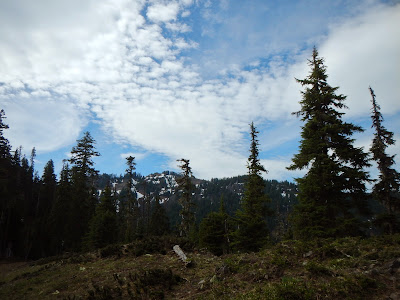 I was really excited to get my feet on a trail, and that I had a willing hiking partner to take off into the woods and get into the snow. But our adventure began much later than planned. After driving out of Corvallis late Saturday morning, we got stuck in a snowbank literally 0.1 mile from the trailhead we were destined to depart from. ARGH! We tried and tried to get the car out and were miraculously saved by a passerby driving out the other direction who happened to have a tow rope. By 2:15 pm we were ready to leave the car behind and start walking.

The trail began right along a pretty little stream. There were patches of snow on the road and beside the trail, but the trail itself was pretty clear from the get-go. As we walked up the switchbacks through the forest, I wondered why I’d checked this hike off as completed in my guidebook, but had absolutely no recollection of ever being here. Oh well. It always feels nice to be on new terrain.

Along the way we stopped to admire all the gifts the forest had to offer: cool mushrooms, pretty wildflowers, interesting tree formations, and tiny-bright-yellow-insects. What? They congregated in massive piles on top of and beneath the snow. I mean BRIGHT yellow. I’d never seen anything like it. We poked at them and I picked some up on my finger. At first glance I thought it was a pile of pollen. But as I examined the blobs on my fingertip, I saw that they had little legs and they were wriggling around. Cool! 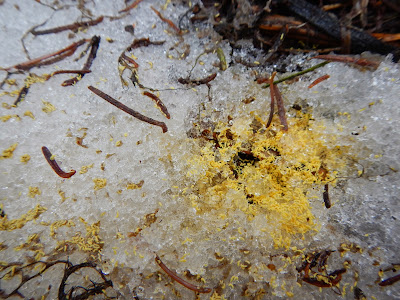 Soon we popped out of the woods and got an excellent view of the Three Sisters and the surrounding terrain. We stopped here for a breather, took several pictures, then kept moving. We did get off to a late start, so we had to keep a quick pace.

Our snow-free trail didn’t last forever. There was patchy snow, on and off, for most of the hike. In some spots, the snow completely obstructed the trail. There was some creative navigating involved in order to stay on track. At one point we stuck to following a compass bearing as we moved ahead, looking for tree cuts. Fortunately the snow wasn’t too deep, so we had many clues to piece together as we plodded ahead.

Reaching the base of the cliff face was our sign that we had navigated well and we were close to the ridge summit. After traversing beneath the cliff for a bit, we picked a line through the snow that led to the summit ridge. From there, a wide open snow ramp led us to the summit. It was breezy on top, but the views were outstanding. It was nearly 6:00, so we didn’t stay up there too long.

On the way back, we mostly followed our tracks through the snow. In the woods, our tracks were nearly impossible to find, since the snow had melted in a pattern of hills and valleys that completely hid our bootprints. We wandered around for a while at some point after reaching the Heart Lake trail junction, getting almost completely disoriented, then decided to backtrack to our last known location. From there, a little hunting around returned us to the correct route and we descended to the car without further incident. It sure was nice to be on clear ground again, with an obvious path to follow.

After returning home, I dug up my old Browder Ridge trip report to see if it would bring back any memories. It most certainly did not, but I realized why the trail didn’t look familiar: I snowshoed this route the first time and I was probably off-trail for a good amount of it.

We were the only ones on the trail that afternoon, too! And then we found a great camp spot on the road heading back to route 20. Here’s what we had for breakfast the next morning: 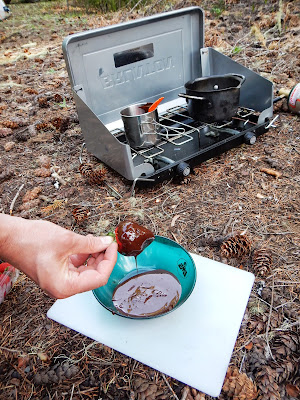 Oh yeah, I love spending weekends in the forest!