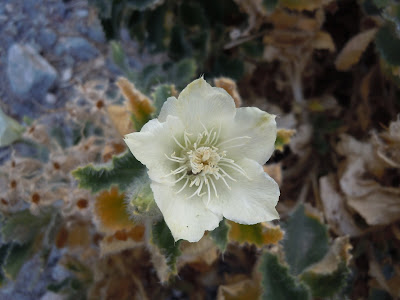 Today we’d planned to visit the lowest place in North America–Badwater. Here, temperatures can soar well over 100 degrees in the middle of the day, so we chose to arrive bright and early.

It was cool enough to wear long sleeves, and there was only one other car in the parking lot when we arrived. The small, saline pool at Badwater housed tiny, endangered snails and other aquatic life. Beyond the pool, salt flats stretched out across the valley floor to the base of the tallest peaks in the park, including Telescope Peak. We looked with admiration towards the summit of the mountain we’d stood atop just yesterday. How different life was down here.

Here’s a panoramic look at the area:

We walked out past the smooth bit of the salt flat that had been packed down by hundreds of thousands of visitors, and continued onto less frequently traveled territory. The salt here was heaved up in places, sculpted into unusual shapes, and punctuated by large holes. Some of the salt formed fragile, threadlike structures that looked like hairs. Looking back towards the parking lot we noticed more people had started to arrive, so we headed back to drive to our next destination.

Just up the road, there are several canyons to explore. Taking Joel’s advice, we headed for Sidewinder Canyon. The hike was described in the Desert Hiking book I’d brought along, but we proceeded to head at once for the wrong canyon. None of these things are signed, of course. Aaron astutely noted a giant “X” made out of rocks and an arrow pointing right (also made out of rocks) at the mouth of the canyon we were about to enter. Heeding these subtle warnings, we headed right into the mouth of the next canyon. 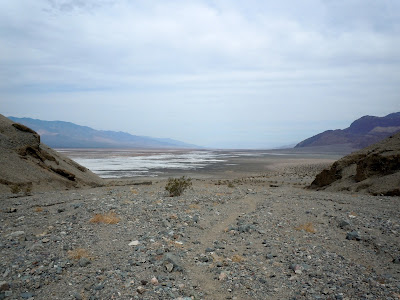 It all began as a wide, gravelly expanse, with steep but short cliffs marking either edge of the canyon. I had sustained an impressively large and painful blister from the Telescope Peak hike and found it very challenging to walk with pressure against my heel, coming from my trail shoes. I decided to try out wearing my ugly purple Crocs instead, since the heel strap could be folded up and away from my pulsing blister.

I can now barely express my joy at having Crocs with me, as they saved the rest of my trip to Death Valley. Even with a large, painful blister on my foot, I was able to walk comfortably over sharp rock, gravel, dirt, sand, and everything else this park had to throw at me. Now, back to your regularly scheduled programming…

We walked through the wide canyon, wondering what all the fuss was about. It was pretty, but there was nothing all too special about it. Soon, we noticed a small passageway on our right that seemed to venture out of the main canyon. The hike we planned was only about 4 miles, so we had time to explore, right? 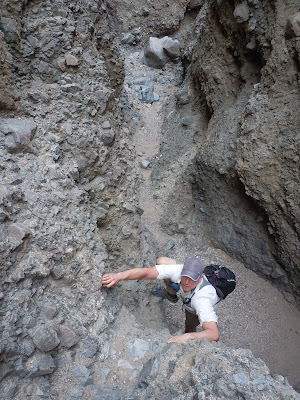 We entered the side canyon and instantly our experience changed. The walls were tall and narrow. They appeared to be held loosely together by mud. Rocks of all shapes, colors, sizes and textures were glued together in an amalgam of debris. While Aaron was busy taking pictures and looking for living things, I stumbled across my prize–a dead chuckwalla. I was really excited to see chuckwallas in the wild at the start of this trip, but I was hoping for a more animated version than this.

With that behind us, we continued in a labyrinthine passageway that twisted and turned so much I completely lost my sense of direction. The walls varied from narrow to more narrow, and chockstones sat wedged in the smallest parts rising up above our heads. Take a walk with us by watching this video:

We scrambled up and over boulders as far as we could go until the canyon died out, then turned around. 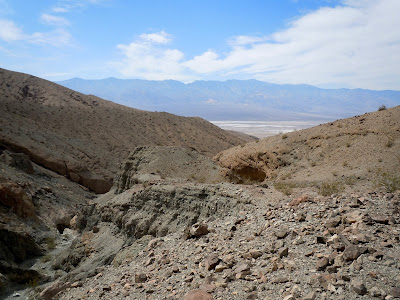 Back in the main canyon, we were newly invigorated. Maybe this was a Transformers hike–more than meets the eye. We walked through the main canyon until it broadened substantially, stopping to investigate each slot that came in on the right. At the turnaround point, we scrambled up a steep game trail that led us to a gorgeous view atop the canyon walls. Temperatures up there flirted with 100 degrees, so we soaked in the views and then dashed back down into the shade.

We pretty much had this hike to ourselves, minus the one couple we saw heading out just as we were heading in. Considering this trailhead was right off the main road in a National Park, we felt pretty pleased with ourselves that we were able to find solitude in this cool little place.

Ugh, Natural Bridge. This stood in stark contrast to our last hike. We parked at the end of the short gravel road leading to the trail and began walking up towards the aforementioned bridge. On our way, we passed hordes of tourists heading to and fro. Many were dressed as if they were heading to the club later, and several were making weird kissy faces posing for Facebook pictures or something. Why do people do that? 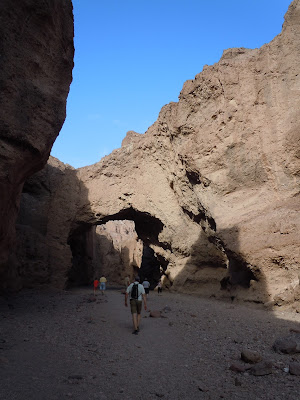 Anyways, at the bridge, a bunch of lazy tourists were milling around taking pictures that marked their grand 1/4 mile adventure from the car. Most people obviously turn around here. That was our cue to keep going.

The canyon continues only another quarter mile longer, but the second half is much more impressive and beautiful than the first. At the end, we scrambled up a short little dryfall that had one steep, smooth section in the middle. Then the canyon dead-ends at a much taller dryfall that can’t be climbed by casual dayhikers. The rock here was streaked with green. We turned to look behind us and saw no one. This was awesome.

On the way down, Aaron descended the dryfall first with his long legs reaching all the nice little footholds. I ended up taking the more adventurous route down by pressing my Crocs firmly into the smooth rock and sliding down quickly on my feet and hands. Apparently I gave some passing tourists a bit of a scare. Ha! 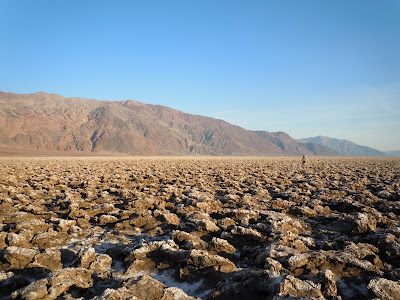 On to another salt flat: Devil’s Golf Course. A short drive brought us here. The terrain is rugged immediately after stepping out of the car. This ground sees far less foot traffic than Badwater. In fact, of the several cars that pulled up while we were there, only a handful of people even opened their doors to get out of the car. It’s no wonder there’s an obesity epidemic in America.

We carefully negotiated the sharp spines and bumps, checking out the new and unique structures made by salt and other minerals. The contrast between the tall, dark mountains and the low, white valley was made even more beautiful by the afternoon light.

We topped off our day with a scenic jaunt down Artist’s Drive, where we stopped at several pullouts to take photos in the setting sun. The rock walls streaked with lots of colors looked amazing in the soft, warm glow of the evening. From there we drove north towards tomorrow’s destination and again found a gravelly spot far enough from the road to make our camp. We enjoyed another night of quiet solitude under the stars.