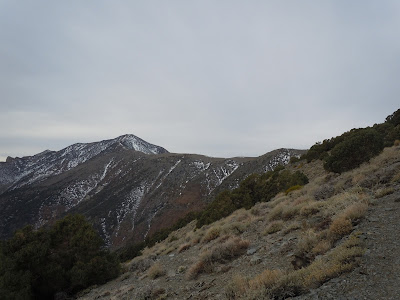 We woke up with the sun on this cool, Monday morning, with mixed thoughts about what to pack for our summit hike. According to the NPS website, winter ascents of Telescope Peak may require ice axes and crampons. Looking at pictures of the mountain from the week prior, it hardly seemed there was much snow left. Our camp neighbor reported, however, that he noticed “a lot” of snow on the north side of the mountain on his Rogers Peak hike the previous day. He also mentioned cold and windy conditions on Rogers, which was a full 2000' lower than our hike today. Therefore, I packed lots of warm layers, including my big down jacket, to prepare for the wind on the exposed ridge. Doubting very much this would be a winter climb, I decided to leave crampons and axe behind.

Aaron and I started our hike from the far end of the campground and signed in at the summit register. There was one other hiker ahead of us in the log book. Almost immediately I could feel the effects of being at elevation. We walked slowly and methodically, and I warmed up quickly. Based on the predicted cold temperatures I had long underwear on beneath my pants, which I regretted badly. I quickly shed upper layers as we ascended but stubbornly refused to hassle with the bottoms yet. The air was cool but still; perfect hiking weather. 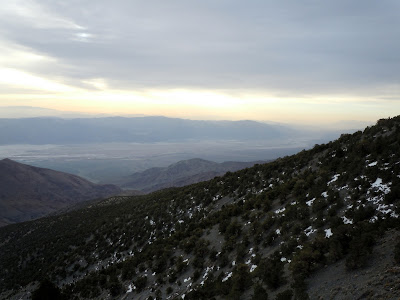 We immediately found expansive views of the entire valley as well as a preview of the rolling ridge walk ahead. It looked like it was going to be a great day. It was totally quiet out here, far from any large towns and well out of sight of roads and buildings in the valley.

The trail up Telescope was well graded. Although it was a full 7 miles to the summit, the miles drifted away with each step. Once I finally broke down and removed the long underwear, I was much more comfortable and moved along more easily. As we ascended, we began seeing scattered patches of snow. I guess “a lot” of snow to someone in Southern California is much different than to someone who regularly plays in the Oregon Cascades. I was really glad we left the snow gear behind. 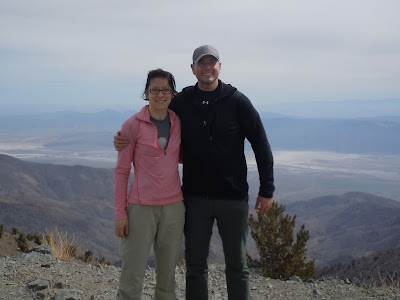 In about 3.5 hours, we stepped on to the summit. We shared our victory with a solo hiker from Nevada, who had tons of great advice to share about what sights to see in Death Valley. We ended up taking many of his suggestions later in the trip and not one of them let us down. If you’re reading this, thanks Joel!

He took off and we stuck around for a bit, eating some lunch, reading the summit register entries and savoring the quiet solitude on this high peak. The weather was comfortably warm and practically windless. There was no sound, no distraction, just peaceful calm. Here’s a panoramic video shot from the summit:

After our extended break we packed back up and headed down the mountain. The rolling ridge was also pleasant in reverse. We passed a handful of people on their way up at various points along the trail. I don’t think we saw more than 10 people all day.

We were back in camp at 2:30. Now what? There was still half a day left! We changed into camp clothes and napped the afternoon away before deciding to head out.

How about another hike? I thought. The moon would be close to full, and the sky was reasonably clear. We’d spotted some sand dunes right near the main road on our way to Mahogany Flat last night. So we drove back to the dunes, where there was a conveniently located large parking area with access to the sand. People were milling about in the lot. A few were actually out for a walk, and one group had set up camp not 10 yards from the parking lot. Nice work, guys.

I packed a small backpack with snacks, water and a long-sleeved shirt and we both set out under headlamp towards the dunes. I remembered spotting one dune in the distance as being the tallest of them all, and had set on hiking to that point. Aaron, not yet able to read my thoughts, had figured we were heading out for a short, aimless stroll. Once we were well out amidst the dunes I let him in on my plan. He reluctantly agreed, but was sure happy once we made it to our destination.

We walked under moonlit skies along ridges and dips in the sand, always keeping an eye on that ever distant high point. There were interesting salt formations and random plants along the way that offered up a distraction from the grueling act of walking through shifting sands. Once we got away from the road, the air was quiet. It was much warmer here than it was at our high camp, so it took some time to adjust to this new temperature.

The last stretch included cresting over two false summits before reaching the apex of the highest dune. It dropped off in nearly a vertical sand cliff on the other side; it was really cool!

I was dying to take my shoes off and run down the giant sand dune. My excitement was met by more reluctance from Aaron, who questioned the safety of my plan. Fortunately, he couldn’t stop me, and ultimately gave in. We both ran gleefully down the side of the sand dune, shoes strapped to our backs. It was oh so much fun.

After returning to the car, we decided to camp on a gravel road for the night. Most of the campgrounds in the park look like unpaved Walmart parking lots. People camp right on top of each other and often there are far more RVs than tents, so it really feels like a parking lot. I’d never want to camp again if that was my introduction to camping. Lucky for us, dispersed camping is allowed in the park as long as you are 2 miles from pavement or a developed area. So we ticked off the necessary 2 miles of gravel road driving, pulled off into a flat, rocky pullout and set up camp. It was quiet and peaceful, just like our summit of Telescope earlier in the day.