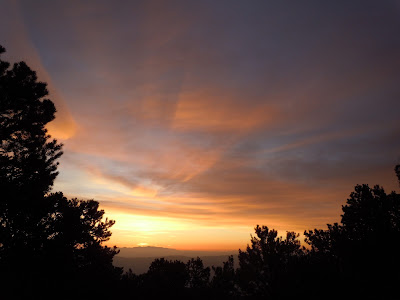 Yesterday we embarked on a major Spring Break adventure: a road trip from Oregon to Death Valley. Most of the previous day was spent driving, but today we’d stop to see a couple of sites along the way to our destination. 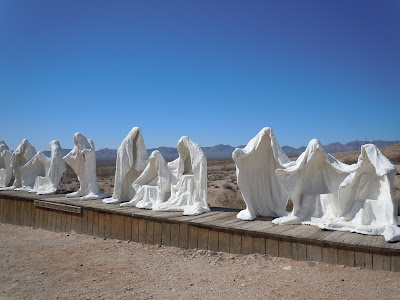 Eight hundred miles of driving brought us to our first stop: Rhyolite. This was a quick diversion from our main route, and I was dying to get out of the car. Just before we reached the town proper, we were distracted by the Goldwell Open Air Museum: a bunch of outdoor sculptures and random pieces of art outside a little information building. We parked here and wandered around, looking at the eclectic collection of artwork. We examined a giant pink lady seemingly built out of lego blocks, a ghostly representation of The Last Supper, and other oddities. The desert air felt warm and inviting. Plus, it felt amazing just to stretch out my legs. 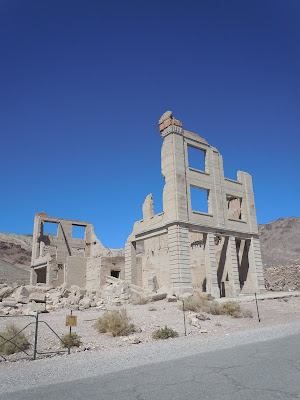 From there, we ambled along the dirt road towards a bunch of dilapidated wood and stone buildings. This was the partly preserved town of Rhyolite. Rhyolite went through a fast boom-and-bust cycle in the early twentieth century after prospectors identified some promising mine sites. Shells of crumbling old buildings remain, including the bank, the schoolhouse, several shops and the jail. We stopped to admire each of these on foot, giggling at the stream of cars driving up the road and back, hardly ever stopping to let a passenger out to explore.

Although stern signs warned of the dangers of rattlesnakes, we didn’t see any. There were some cactus plants and rusty, metal cans, but nothing particularly dangerous around. After touring the town we sat in the shade to eat lunch and relax.

Just outside Death Valley National Park lays Ash Meadows. This refuge, on the Nevada/California border, is a unique desert oasis. Its spring-fed pools, streams and wetlands provide an environment for many plants and animals to thrive. Almost 30 species here live nowhere else in the world. There are birds, reptiles, mammals, fish, plants and shrubs all adapted for life in the desert. In addition, the refuge provides food and shelter for migratory birds in the spring and fall. 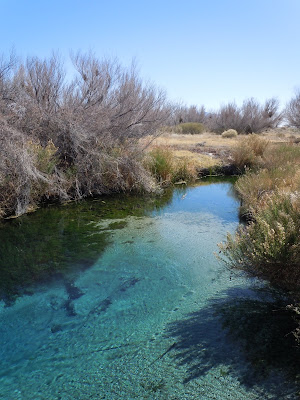 The refuge is well developed for people to visit without endangering this precious natural resource. Well-marked trails and boardwalks guided us throughout the diverse landscape. We admired mesquite trees, vast salt flats, meandering streams, grassy outcrops and marshy flats on our walks in the park. We stopped at Crystal Spring, Point of Rocks, and Devil’s Hole.

Devil’s Hole was what initially drew my attention to this place; and it was the most disappointing stop on the trip. I’d advise looking at the picture online, but skip driving out there. It’s so heavily guarded by fences and gates, you can’t really get a good look at it. Just imagine it’s a bottomless hole filled with pristine spring water and teeming with endangered pupfish. The actual hole is not much to look at.

The other stops were amazing. Interpretive signs dotted the trail, explaining the forces of nature that built this place. Descriptions and pictures of native wildlife were there to help us identify the critters we were seeing. Although I didn’t see any roadrunners or chuckwallas, as I’d hoped, we saw a bird totally new to me: the Phainopepla. Sadly, we had to leave–there was still another 2 1/2 hours of driving to get to our campground in Death Valley. 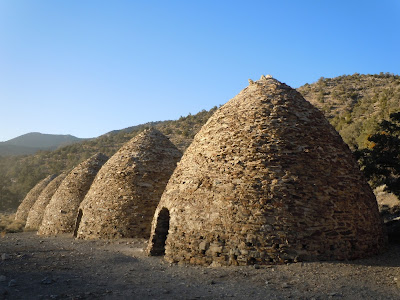 The drive into Death Valley was predictably spectacular. The scenery was grand and vast. We stopped briefly at Zabriskie Point to take the required photo of the badlands, then cruised over to the visitor center at Furnace Creek just before closing time. From there, we drove on paved and gravel roads, past the charcoal kilns and up to the highest campground in the park: Mahogany Flat. At 8133′ high, the campground was markedly cooler than the desert floor. We layered up, got a fire going, and watched the sun go down over Badwater, nearly 10,000 vertical feet below us. Tomorrow we’d wake up early to hike to the top of Telescope Peak.

View all the photos for this trip on Google Photos. More pictures will be added over the week.