I awoke eager to begin another day of coastal exploration. My outdoor breakfast experience took me to the parking area at Cape Blanco, where I enjoyed another simple cup of granola and milk. The Cape was totally enshrouded in fog and the air was very cool. When I arrived there was only another car or two sitting in the lot. But as I worked through my granola, loaded RVs and cars pulled in, dumping their obnoxious human cargo out onto the land. It was then I decided to leave. 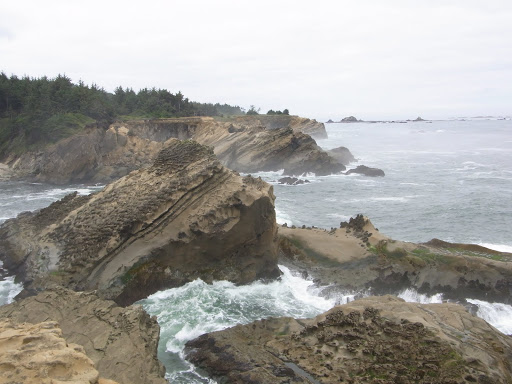 My plan was to drive towards Coos Bay, stopping first at Shore Acres State Park. I walked out in front of the Observation building where I soaked in astounding views of the offshore rocks and undulating coastline. From there I walked over to the Botanical Gardens. This was a neatly manicured place with hedges and benches and carefully arranged flowers. It all felt so civilized. There were some really beautiful flowers there but the feeling wasn’t the same as coming across wildflowers unexpectedly along the trail. I found the shortest way out and hopped back in the car. 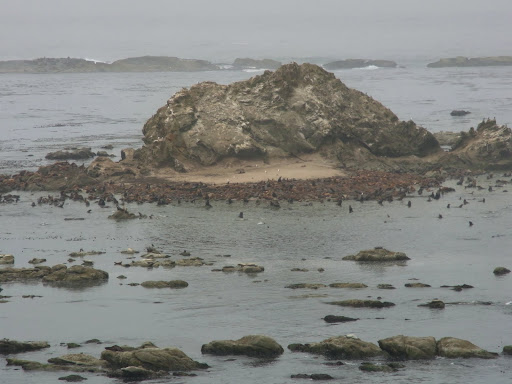 From there I followed the sounds of sea lions up the road about a mile where a marine wildlife organization had set up their viewing scopes at a roadside pullout. I checked out the marine mammals in an up-close-and-personal way, much like watching a David Attenborough documentary. Sea lions and seals were heaped up on top of each other, flopping around and making a fuss. As more people arrived I ducked out of there and continued to Cape Arago.

The trail I chose at Cape Arago quickly became too steep and muddy for my and my aluminum leg so all I could do was hang out at the paved viewing deck and look at the water. I had a long conversation with a physical therapist about my iWALKFree, which she hadn’t seen before. Sigh. My injury is making me into a minor trail celebrity.

Back on route 101 I drove angrily, stuck behind idiot RVs and speed changers. Sigh, it was the weekend for sure. I managed to get a couple of good high speed passes, otherwise I still would be driving home today. 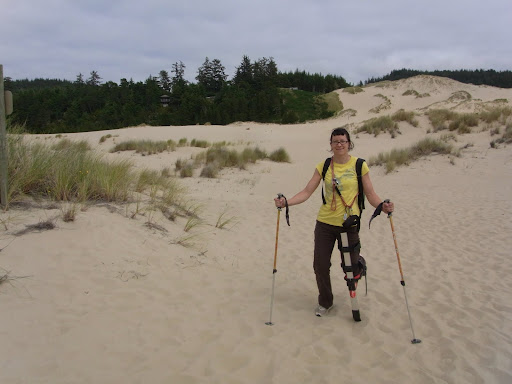 I wanted to stop somewhere in the Oregon Dunes that was new to me, didn’t allow ATV access, and would be easy enough for the peg-leg to handle. That left me with pulling off the road at the Oregon Dunes Overlook, according to the Sullivan guide. I took off down (of course) a paved path that led to the dunes. Ahead lay a large, gently rolling surface of sand. I crossed it smoothly and methodically, just as if climbing a long snowfield. Next I traveled across the “deflation plain,” a place where the forest is taking over the dunes. To think that the dunes here would be gone in 100 years was baffling to my brain. I walked along slowly, with surprisingly few people crossing my path, until I reached my first glimpse of the beach. Hooray! I had made it one mile and was rewarded appropriately, with a huge beach and big ocean views. There were a number of people here relaxing, playing frisbee, and testing the water, but it was nothing like being on the beach on the East Coast. I found a little plot of sand for myself, took off my crutch, lay flat on the sand, and enjoyed this small respite from my hike.

As I lay on the sand I noticed the breeze and chill in the air disappear. Heat radiating from the sand warmed my resting body. The granules of sand felt comforting against my skin. Before leaving I did a little light stretching, strapped on my crutch and returned to the trail.

The trip back was slow and relatively uneventful, save for a few conversations with folks heading out. One particular little boy totally made my day. The interchange went something like this:

“What happened to your leg?”

“I hope you feel better soon.”

He was so cute. No other kids spoke to me the whole trip; they only stared.

I reached the car exhausted and searched my map for the nearest camping options. Free, of course, I wouldn’t dream of paying the out of control State Park camping fees to camp next to 70 families and their RVs at the beach. So, I ended up at the North Fork Siuslaw Dispersed Camping spot off rt. 126 outside of Florence. I had to drive a ways down a road to nowhere to get there. It was almost exactly what I was looking for. There was one other family there but for the most part they were quiet; although, they did spy on me when I was trying to get to sleep. The site had a fire pit but no picnic table and there was some trash strewn about the site and down the little trail leading towards the river. Is it really that hard to pack out your trash when CAR camping? Geez.

I was too lazy to put my tent up, and so with no threat of rain I decided to just sleep out. The mosquitoes were back, but I found that by wearing a hooded sweatshirt and swearing at them, they didn’t really bite.