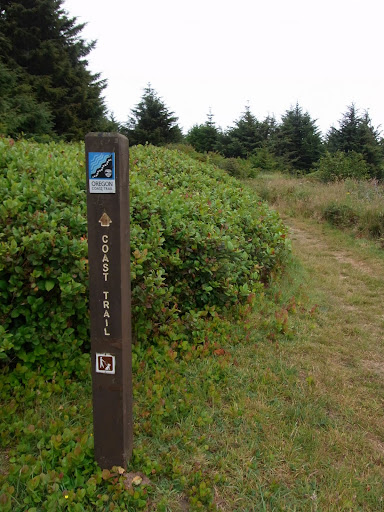 I had pretty low expectations for this leg of the trip. Miles upon miles of dealing with miserable tourons, stopping at a billion little waysides, and choking on sopping wet air did not seem very appealing to me. I could not have been more wrong.

I drove straight from camp to Brookings, where I stopped at a cheesy 24-hour “Family Restaurant” for breakfast. It smelled like old people in there. I had a plate full of refined carbohydrates and grease, plus I ate the raw kale garnish just to get a fresh vegetable in my system. Dipped in extra maple syrup (more likely, corn syrup) it didn’t taste that bad.

The sky was overcast and dripping with moisture as low clouds clung to the treetops. It was chilly–in the 60’s– and I even had to use my window wipers. My first stop of the day was Harris Beach State Park. This was an impromptu stop not highlighted in my book, so I just took off down the little paved path that appeared to be going towards the beach. What at first seemed to be an ordinary access path turned out to be a collage of colorful wildflowers. I whipped out my camera every thirty seconds to take pictures of each new flower I encountered. My minimal knowledge of forest plants and flowers helped me identify just a small percent of the flora along the path. I studied each and every new plant, committing details to memory so I could look them up later. It was an exciting romp down the trail.

I exchanged pleasantries with a few people coming and going on the path. As I was still descending, a woman coming up from the other direction said something like “OMIGOD it’s sooooo far down;’ at which point I knew that I couldn’t be far. Sure enough, I was soon in view of the beach. The pavement turned to sand, and lots of downed trees and rocks blocked me from going any further. Of course, I’d left my poles in the car. No problem, there were lots of gorgeous flowers right there. 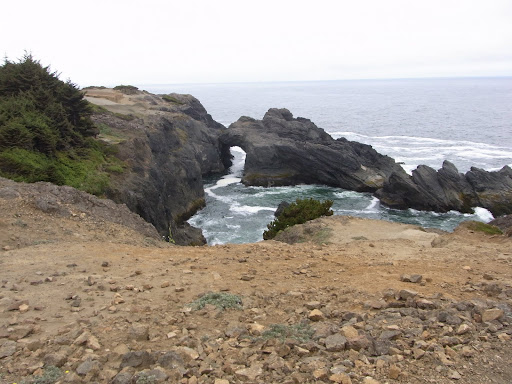 I ambled slowly back up to the car and made a few other short visits to waysides before stumbling across the real gem of the day: Indian Sands. From a large, circular parking area with only two other cars, I walked steeply down a wide, soft trail into the woods. The trees were tall and widely spaced apart. The forest floor was blanketed with salal, sword ferns and mushrooms. Ten minutes of walking brought me to an abrupt change from coniferous forest to sandy scrubland. I picked my way around various user paths to find the best way to move towards the beach on my robohiker peg-leg. After crossing the sand I was treated with breathtaking views of of the sand, meadows, and rugged coastline. No one else was in sight. Lupine and paintbrush, familiar friends from the alpine, colored the sand. Lots of unfamiliar plants clung to the sand and rock as well, their twisted, low-profile forms evolved to withstand the harsh conditions of the Oregon coast. Waves crashed violently on the rocky shore, leaving streams of water to trickle down the uneven, igneous surfaces into the pulsing sea.

I took off my crutch and found a relatively comfortable perch with a killer view. I didn’t bring any food or water so I wasn’t able to stay long. Reluctantly, I returned towards the woods, taking a slightly different route, then prepared to face the seemingly immense uphill push at the end. It was a major workout getting up there on one good leg.

For lunch, I stopped at the Arch Rock viewpoint, where I crafted a one-of-a-kind peanut butter and marshmallow sandwich on Shasta whole-grain bread. I had to defend my prize from a curious gull, but it was well worth the effort. The sun had finally made an appearance, and it was time to move on to the next stop.

My final attempt at a hike began at the Pistol River State Park Viewpoint. I put on my sunglasses, loaded some water and a book into my backpack, then started out across the sand. The wind was blowing in a fierce way. Pellets of sand hit the side of my face at warp speed, threatening to exfoliate inches off my skin. I kept going, thinking maybe I could find a sheltered spot up and over the next dune. That didn’t happen. The wind seemed to get worse, and the sand grains being driven into my skin seemed to be purposeful in their action. Defeated, I turned back and jumped back in my car. 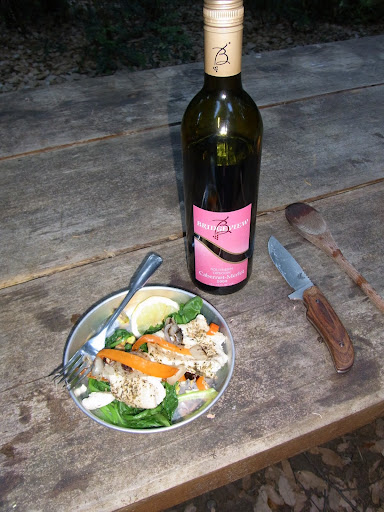 I dreamed up a new mission for the afternoon: find who’s selling the catch of the day, load up on fresh produce, and go make a slammin’ meal for dinner. I did just this, buying supplies in Gold Beach and Port Orford, then traveling 20 miles east to set up camp at the Butter Bar Campground, yet another free, primitive, Forest Service operated camp. I proceeded to get some good coals going in the fire ring and orchestrated an exquisite feast: snapper with lemon, shallots and bell pepper on a bed of wilted spinach and pistachios plus grilled corn on the cob. I washed it all down with a bottle of Southern Oregon red wine. It was the perfect conclusion to a good day on the Coast.