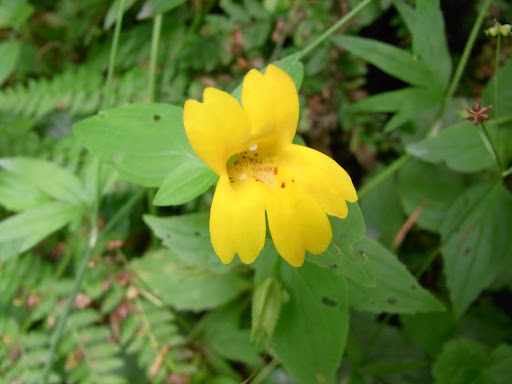 I awoke several times during the night for some strange reason. It was fitting that I got up and at ’em earlier than usual on this, the last day of my week-long adventure. There was one short hiking loop 2 miles up the road from where I was camped; this was the real benefit of camping here. I had no idea that I was in for such a treat.

I arrived at the Pawn Old Growth trail head before 7am and ate breakfast there. Taking heed of the “No Shooting” sign I left my weapon in the car and began my hike (kidding). The trail crosses a bridge over a lazy stream, passes by a large, mossy rock face and switchbacks up to an incredibly diverse parcel of old growth forest. The understory consisted of hundreds of plants, only a few that I was familiar with, and many interesting ones worth photographing. I had seen many of these new plants along other hikes that week, so they were starting to look familiar. But I noticed many other flowers and herbaceous plants that I had not noticed before. Many spring flowers were blooming late; I couldn’t believe that there were Bleeding Heart flowers along the trail! There were also pink and white foxgloves, maidenhair fern, lady fern, monkeyflower, manroot (with spiky green pods!), hedge nettle, Solomon’s seal, and on and on… There were also loads of massive trees as well as a charming little river down a steep embankment that paralleled part of the route. The forest was pleasantly quiet, with the occasional chirping chipmunk in distress, and I greatly enjoyed my walk through it. I took my time, taking pictures everywhere, and being mindful of my sore and tired knee. The friction of the crutch and the scar line on my knee was just too much. I would be happy to have some days of rest when I returned home. 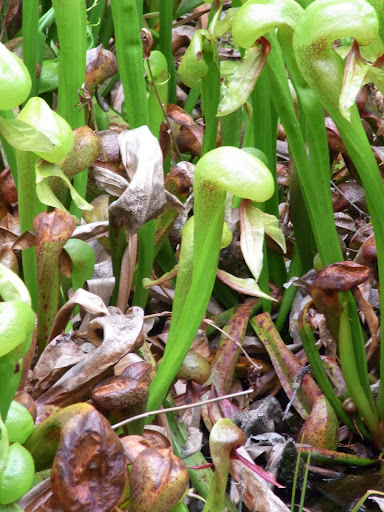 Next, I returned to the main highway and stopped at the Darlingtonia Viewpoint. I had seen these unique carnivorous plants in Northern California years before, but now I was about to see them at the northern end of their range. These plants are gorgeous, even when they are dying, because they start developing speckles of red and taking on more twisted and convoluted shapes. I ogled the plants for several minutes and chatted with a Corvallis-to-San Francisco cyclist before hobbling back to the car and driving off. 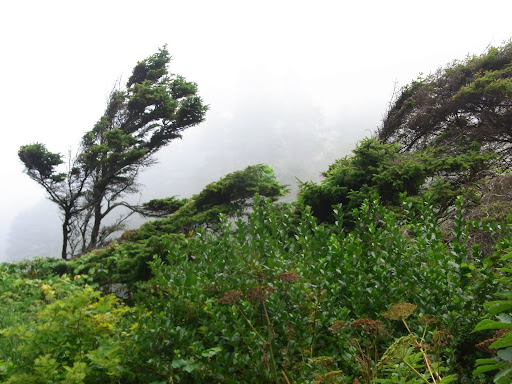 My next hiking stop was the Trail of Restless Waters in the Cape Perpetua Scenic Area. A 0.5 mile loop led to a viewpoint of Devil’s Churn, connected with a spur to a beach, then returned to the parking lot. I got some funny looks from the unhealthy group of people milling about at the top of the trail before ambling down to see what Devil’s Churn was all about. According to my guidebook, this was a narrow, rocky inlet that funneled seawater into it, causing dramatic crashes of waves and picturesque views. It turned out being a little less impressive than advertised, but it was worth the walk nonetheless. From the dead end I continued along the entire half mile trek, which most visitors apparently do not do, seeing lots of wind-sculpted trees, flowers, dense thickets of coast vegetation, and a wide, sandy beach.

The drive along 101 offers countless opportunities to stop and pull off the road to see one sight or another, but I hadn’t even come close to seeing all there was to see. I was beginning to feel really tired, and consulted my book to choose one last stop before heading east. Sullivan describes Ona Beach State Park as “rank[ing] among the most scenic spots on the Central Oregon coast” so I thought that would make a nice ending to my coastal explorations.

At the park, I walked down a paved path, crossed a bridge, and reached the beach. It was nothing special. Actually, it was one of the uglier and more boring walks and viewpoints I’ve experienced throughout my entire trip. Sullivan has never let me down before; he must have been paid under the table to endorse this little piece of non-paradise. Defeated, I returned to the car ready to get back to Portland, stop driving, learn about the wildflowers I’d seen, and eat some fresh produce.

In summary, my week on the road turned out to exceed all my expectations. I was able to walk further and longer than I anticipated. I found excellent spots to camp away from crowds of tourists, even near the coast. I saw beautiful birds and wildflowers. I balanced driving time, walking time, and resting time in a way that kept me happy, fulfilled and refreshed. A great sense of hope pervaded my sometimes glass-half-empty brain; broken foot or not, I can still accomplish more than what most people with two solid feet do in a day. And when I got back, I started to think: “well, where do I go next?”