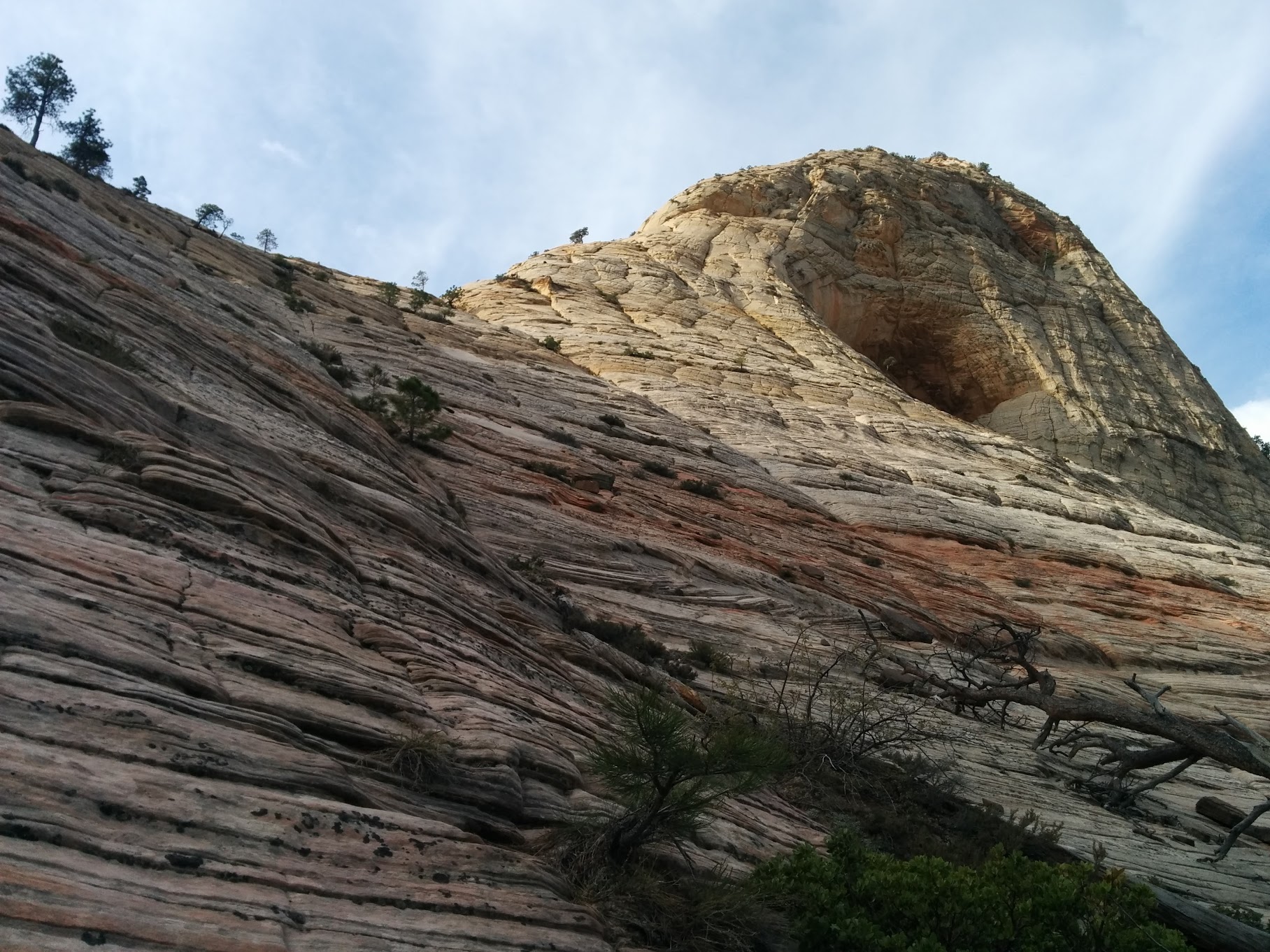 We met up with Rick at a coffee shop before sunrise, and caravaned up to the Wildcat trail head in the central part of Zion National Park. With less publicity and several road closures planned for the day, we anticipated more of a wilderness experience on the trails.

Aaron, Rick and I hiked down the Wildcat Canyon Trail and turned on the junction towards Northgate Peaks. At trail’s end, the two Northgate Peaks stood like stone lions guarding the gate of some VIP’s mansion. We bushwhacked down the overgrown blocks of dark lava rock to the sandy valley floor. Heading directly towards our obvious target, we picked our way through scraggly shrubs and the occasional pine tree as quickly as we could. Once we reached the impressive sandstone slabs of North Guardian Angel, Aaron turned back to hike up East Northgate Peak while Rick and I harnessed up for our climb. 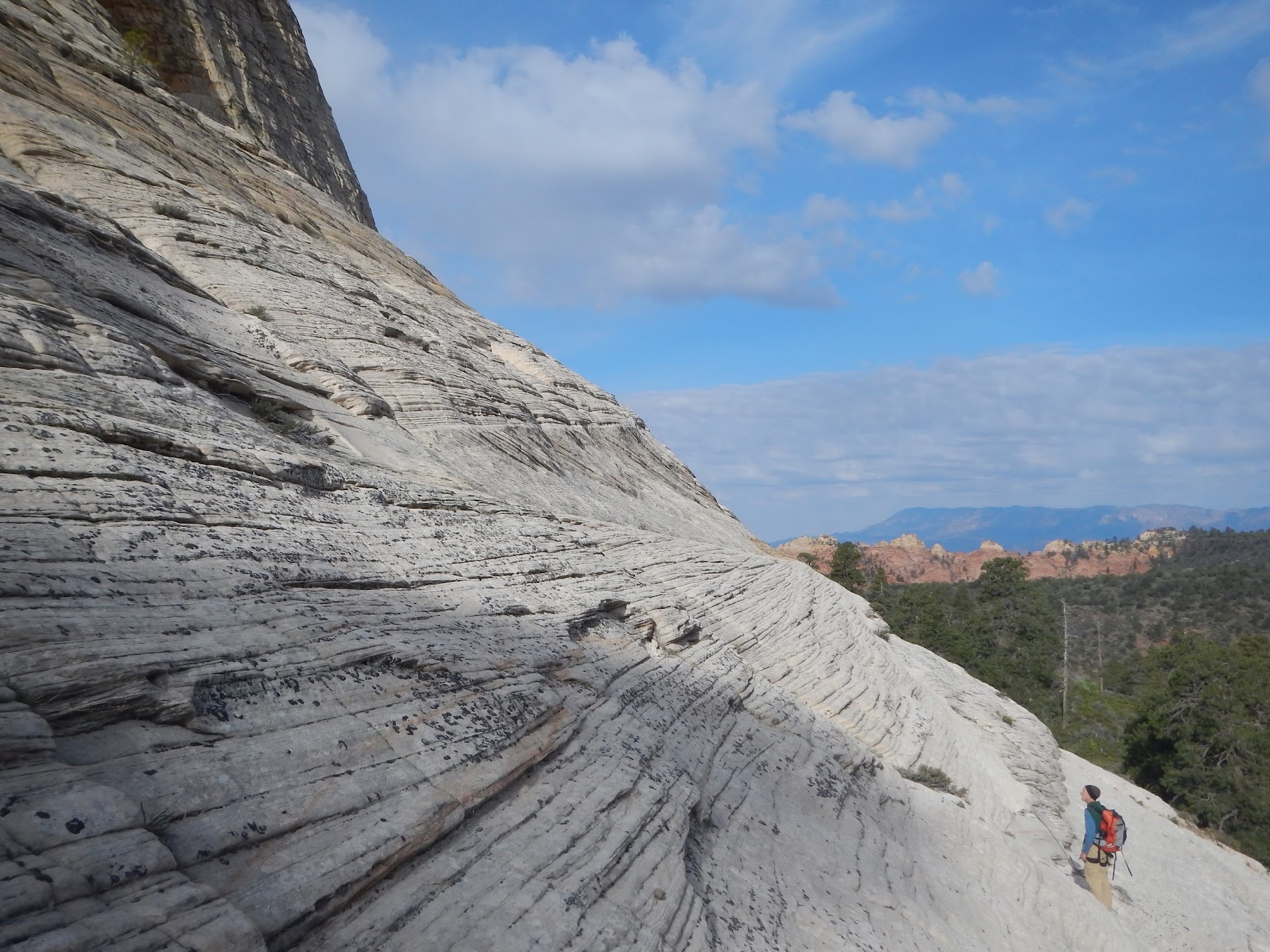 The first bit was a fun, third class scramble up the horizontally scarred slab to the long, flat landing zone above. My approach shoes felt incredibly sticky on this rock. We weren’t in Oregon anymore…

Once we hit the plateau, we roped in and I led up the first pitch of actual climbing. The hardest moves (as always) were right off the ground—within the first 30 feet or so—and so it took a little mental magic to push myself through on lead. Since I rarely ever climb rock anymore, my brain gets a little rusty on exposed, unprotected climbing, even when it’s technically easy. 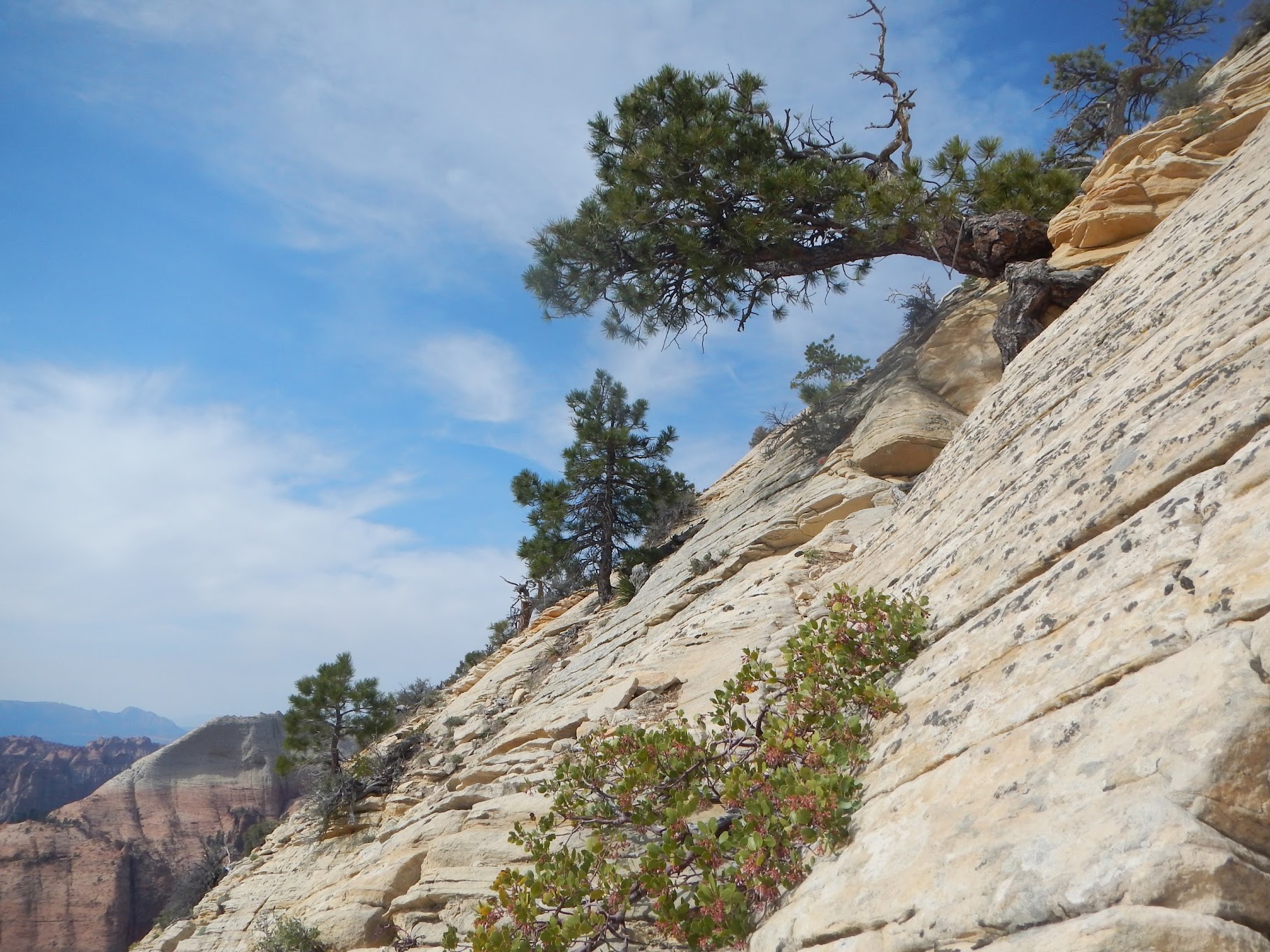 Once past the tough spot I breezed up to a good anchor point and brought Rick up. There may not have been anywhere to place nuts and cams on this climb, but there were plenty of Ponderosa pines along the way. Each pitch ended at one such tree, and was almost always shared with a massive throng of red ants. That kept the pace moving. We consulted a photocopy from one of Rick’s climbing books that had a play-by-play route description to keep us on track, but mostly the pitches ran out whenever there was a convenient tree to sling.

We ended up climbing 4 or 5 roped pitches, then carried the rope up the final ascent. The climbing was really enjoyable and never that challenging, but the exposure made us pay attention. It felt nicer to be roped up, even though belaying up my partner was exhausting (since he was cruising along so fast).

Near the summit block, we had some options. We decided to go left and traverse around the “face” of the ridge, since it looked pretty vertical. The traverse was pretty easy, minus one airy step that Rick assured me was no big deal. After that, it was a straightforward scramble up some loose but not exposed sections of rock. 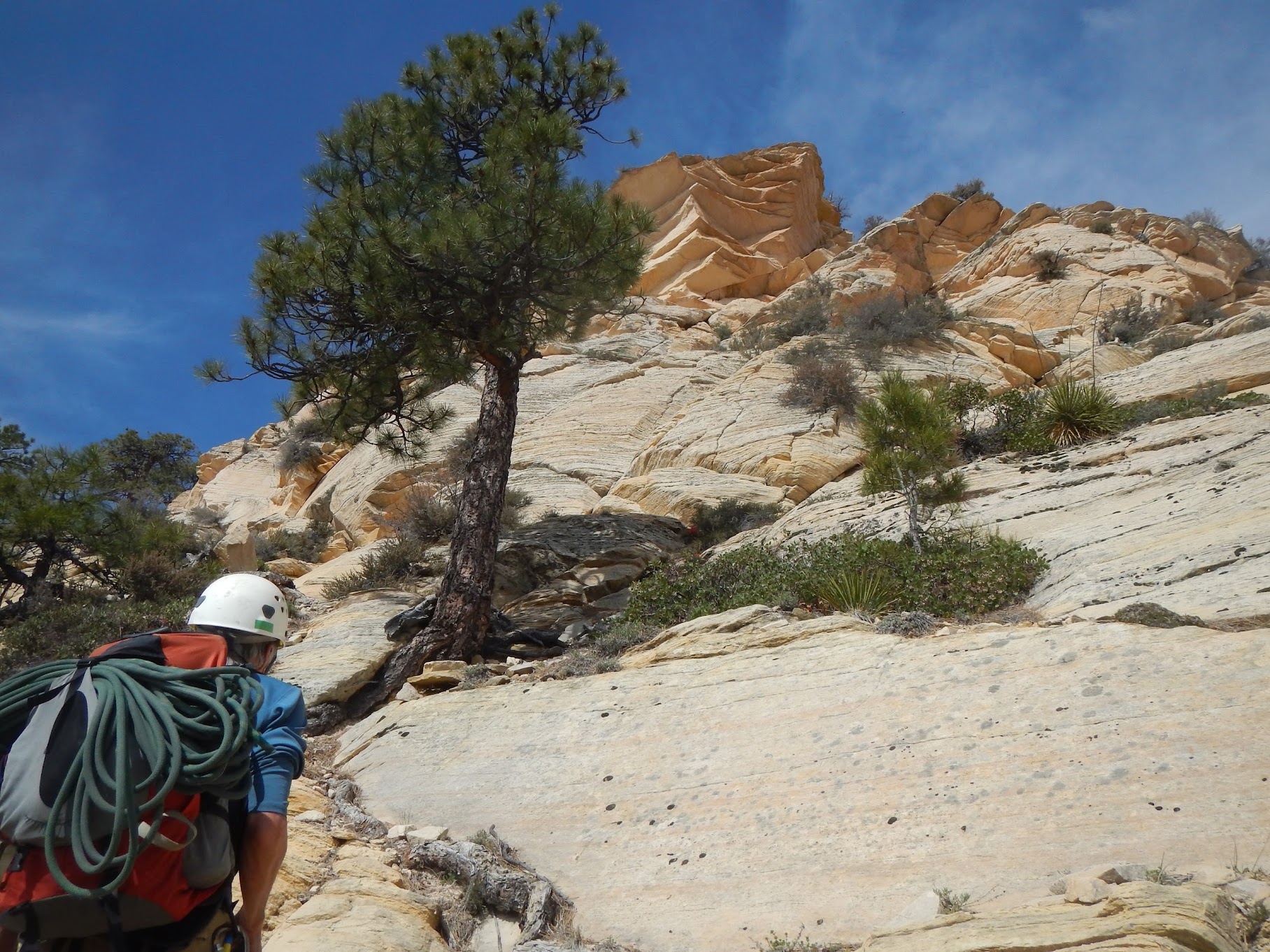 On the summit, the views were incredible. Pale, slickrock mountains jutted up from the forested scrubland all around it. Voices echoed out from the Subway, a popular canyoneering route nearby. We hung out and ate snacks for the first time today, admiring the colorful mountains and valleys in all directions.

On the way down, we walked to the edge of the summit block wall and set our first rappel. This saved us some time and hassle negotiating the exposed section we passed through on our way up. By combining downclimbing with rappelling we comfortably descended the ridge back to the plateau. One last slickrock scramble brought us to the base of the mountain, where we packed up our gear and headed out. 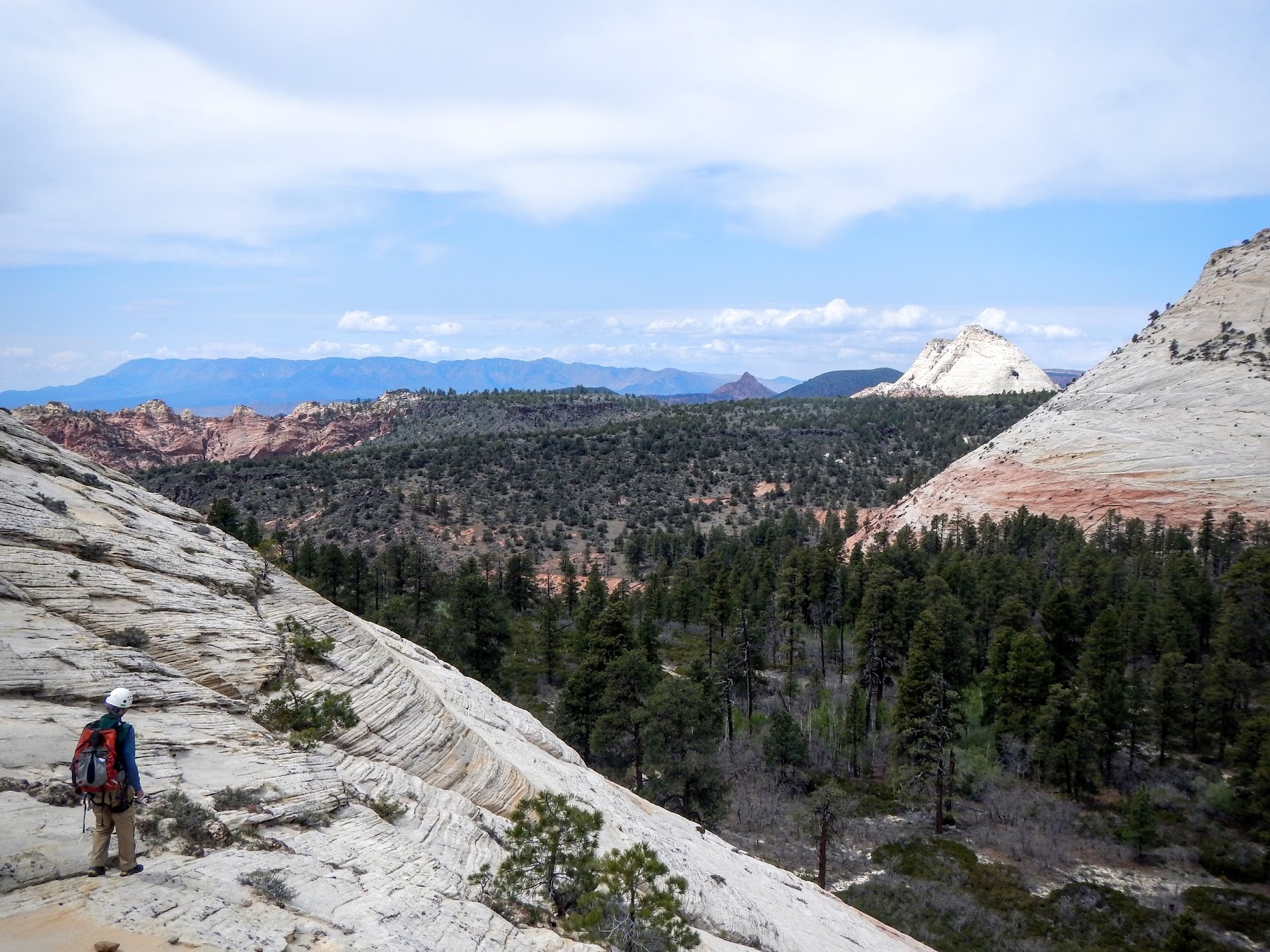 It was now pretty warm and we were both ready to be done. We aimed for the gap between the Northgate Peaks and I scrambled back up the lava to the trail while Rick stayed low in the valley. After much yelling, waving of hands, and wandering back and forth on the trail, we met up once again and retreated towards the trail head together. 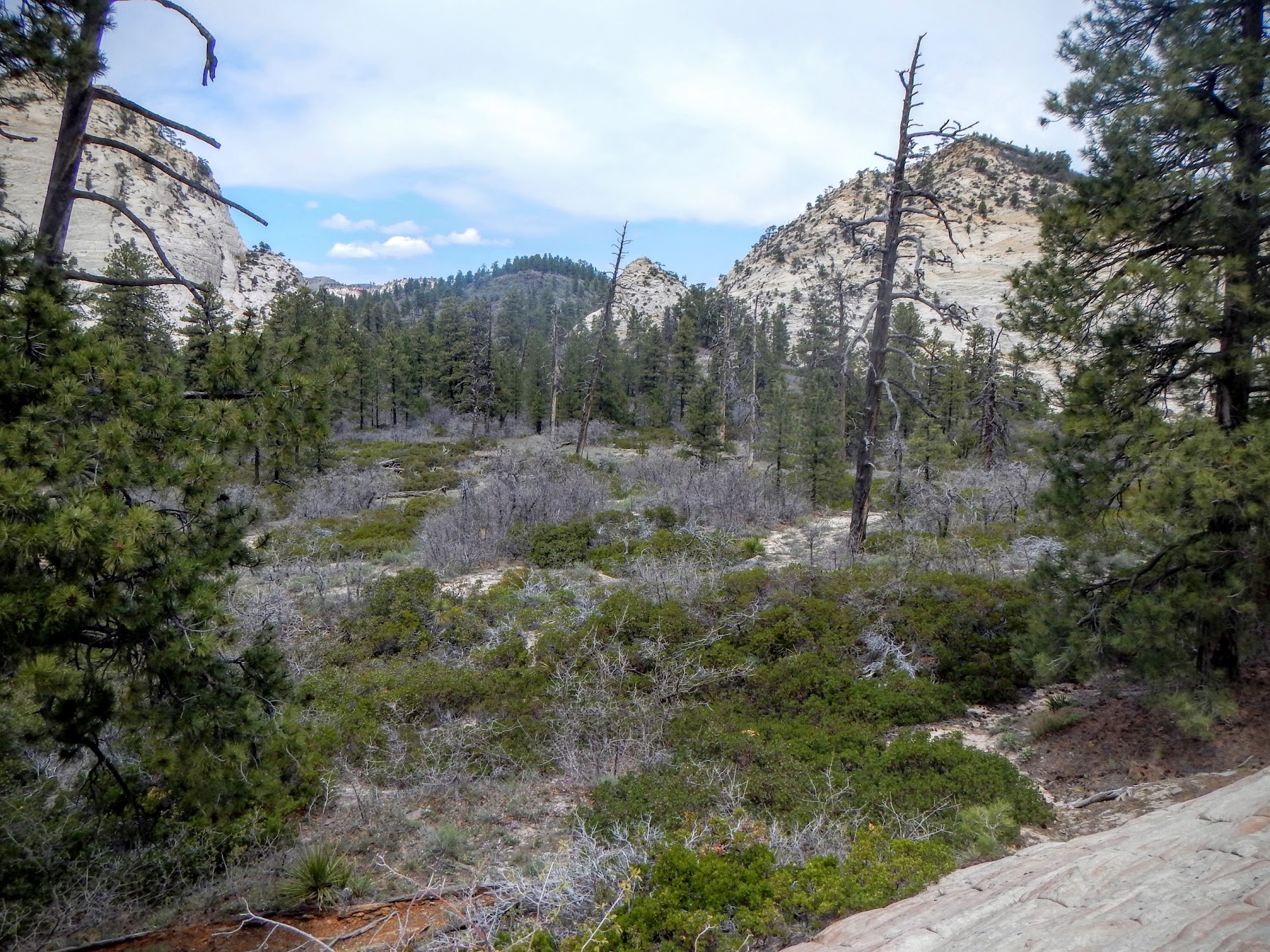 At our final trail junction before the parking lot, we came across a group of young women with overnight packs on, who were paused for a break. Rick asked if they were headed to the Subway, to which they basically replied: “whatchutalkinabout?” They clearly had no idea what the (most popular route in the universe) Subway was, where they were or where they were going. We marched away from the confused ladies, remarking on the utter lack of preparation the average visitor seems to have in the National Parks.

We then continued marching along the (wrong) trail for another mile, wondering why we hadn’t reached the car yet. 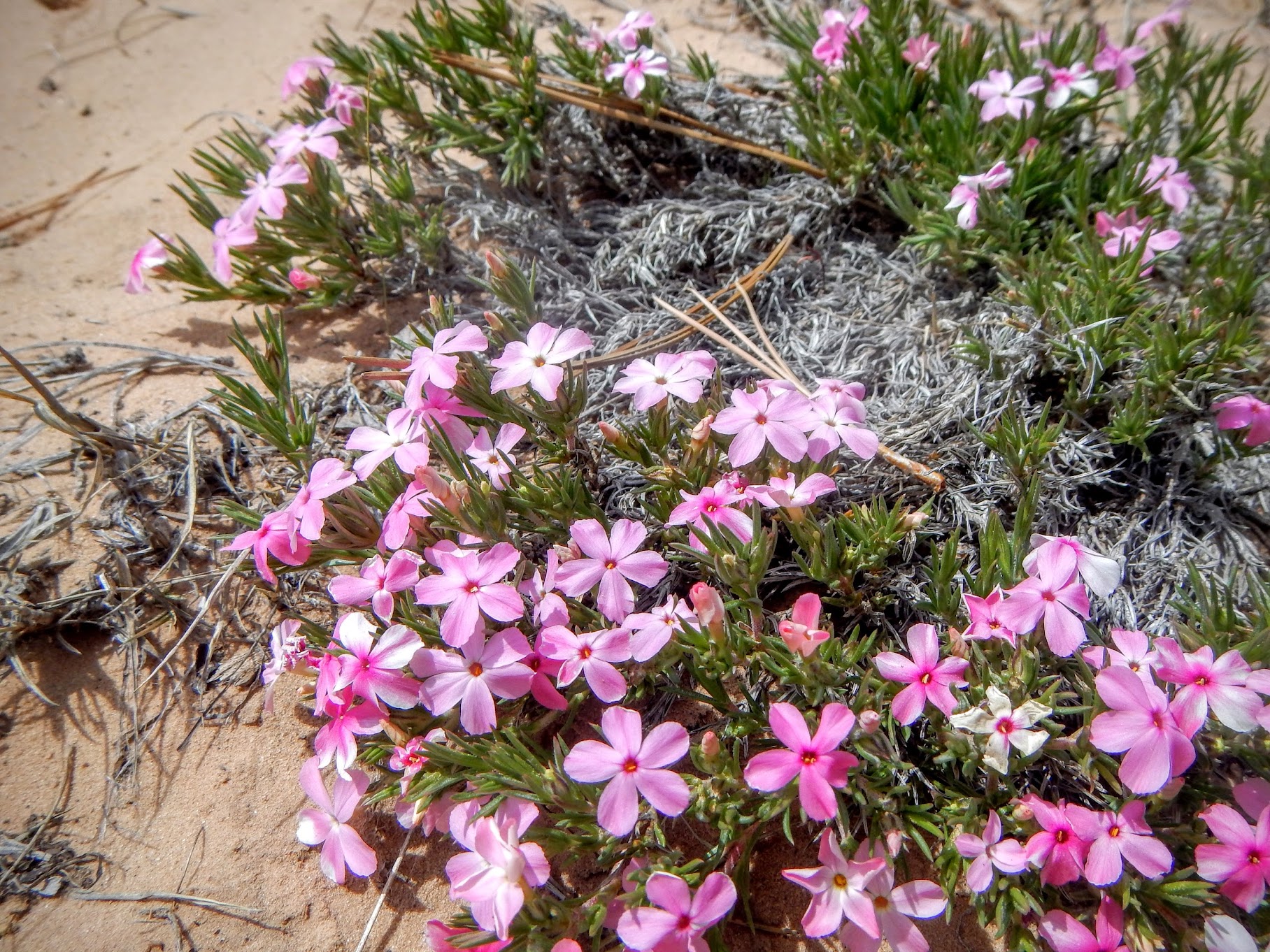 It then occurred to us that we’d mistakenly taken the connector trail to the Hop Valley trail head and had overshot our destination. After a brief moment to reflect on the irony of the situation I pulled out the map and noticed that we could bushwhack up the cliffy rock band to our right once we reached the general area of the parking lot, instead of hoofing it all the way back to the aforementioned junction. Conveniently, there was a break in the vertical wall right where we needed it and we clambered up the rocks to the field just south of the lot.

Meanwhile, Aaron had gotten concerned that it was taking us so long to return, and had decided to hike back up the trail to look for us. Fortunately he ran into a couple who had passed us on the wrong trail and based on their conversation, he figured out what happened. We eventually reunited and all was well. Just a hiccup in the adventure.

This would be our last foray into Zion National Park. I enjoyed the solitude, the outstanding views, easy climbing, and unique perspective of the park. I left Zion with a positive vibe and I was ready for the next stage in our road trip.

Doing more research? Here’s a very bare bones route description on Summit Post. And another from Mountain Project. Bring a rope, material to build belay anchors and a handful of slings; leave the nuts and cams at home.