We rolled into Bryce Canyon well after dark, with no camping reservations and a low level of patience. We found what was likely the very last open site in the whole park at Sunset Campground. We quickly set up the tent, crawled inside and immediately began hibernating.

In the morning we made a hearty camp breakfast, bundled up and prepared for a day on the road. Most people visit Bryce by car. In a half a day, you can drive the length of the canyon, pop out at each of the viewpoints, take a few selfies and be back in town well before dinner time. We thought we’d take the drive to get an overview of what was available, then do some hiking. 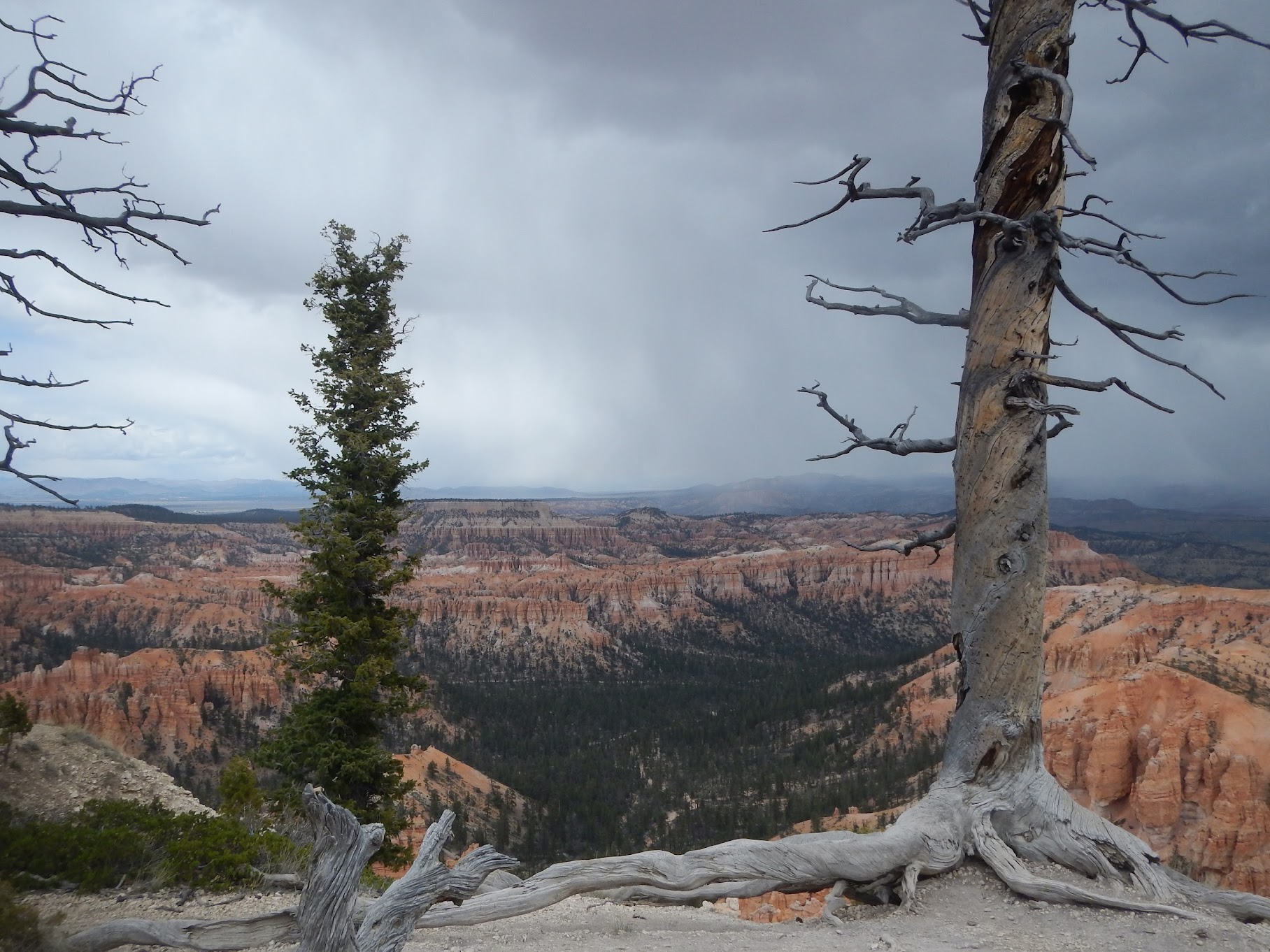 The drive was lovely. We drove out to Rainbow Point at the south end of the park and worked our way back. Each stop provided a different view of the park. We saw hoodoos, natural bridges, and colorful, banded rocks. On this day the clouds were gray and threatening. We stood in a few brief snow squalls. This was much different than Zion.

We did hike the Bristlecone Loop early in the day but it was unremarkable. The trail was boring, not very scenic, and short. Any other hike in the park would have been a better choice than that one.

The first time we really set out for a hike was the walk to the Hat Shop. The trail descended from the canyon rim at Bryce Point, following several switchbacks down towards the river. We passed by a trail crew on their lunch break. Tools were scattered all over the side of the trail. It looked like terribly difficult work in the heat of the afternoon. We trotted happily by. 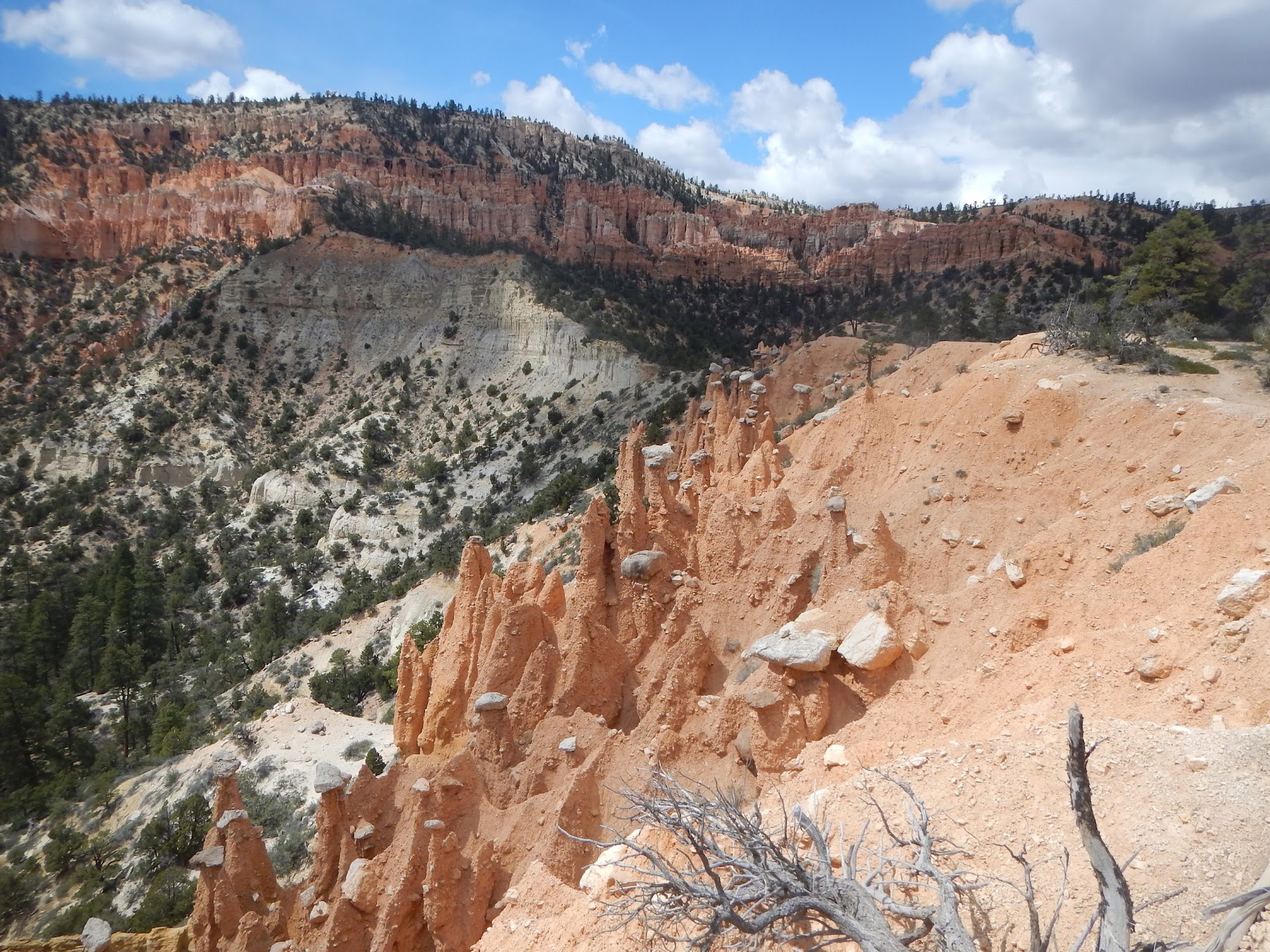 About 2 miles down, we began to see our destination. The Hat Shop earned its name from the series of orange hoodoos topped with dark gray rocks. They looked like they were each wearing a little hat. As we walked down the trail, more capped hoodoos came into view.

We found a large, twisted tree just off the side of the trail that served as a snack spot and provided a little shelter. After spending all morning around cars and tourists, it was nice to get out into what felt more like wilderness.

The downside of canyon hikes is that the tough part comes on the way back. We walked back uphill into the crowds of people taking photos to post on Instagram, and headed back to camp.

In the morning, we drove to Sunset Point for a bit of a longer hike. The Figure-8 Loop, as it was known, included the Queen’s Garden, Navajo Loop and Peekaboo Loop trails. We began descending under a layer of thick clouds. The trail drew us down into narrow-walled canyons where a surprising number of tall pine trees grew. In some sections of trail, the rock seemed to enclose us completely; in other areas, the rock opened up to expose panoramic views of the park.

Along the way, we passed some dramatically named features: Thor’s Hammer, Wall of Windows, the Cathedral, Queen Victoria, the Sentinel. Many other interesting features had yet to receive any compelling name. We appreciated them equally. I thought this frozen mudslide was one of the cooler things we saw along the path. But just like children, I’d imagine, it was hard to pick a favorite. 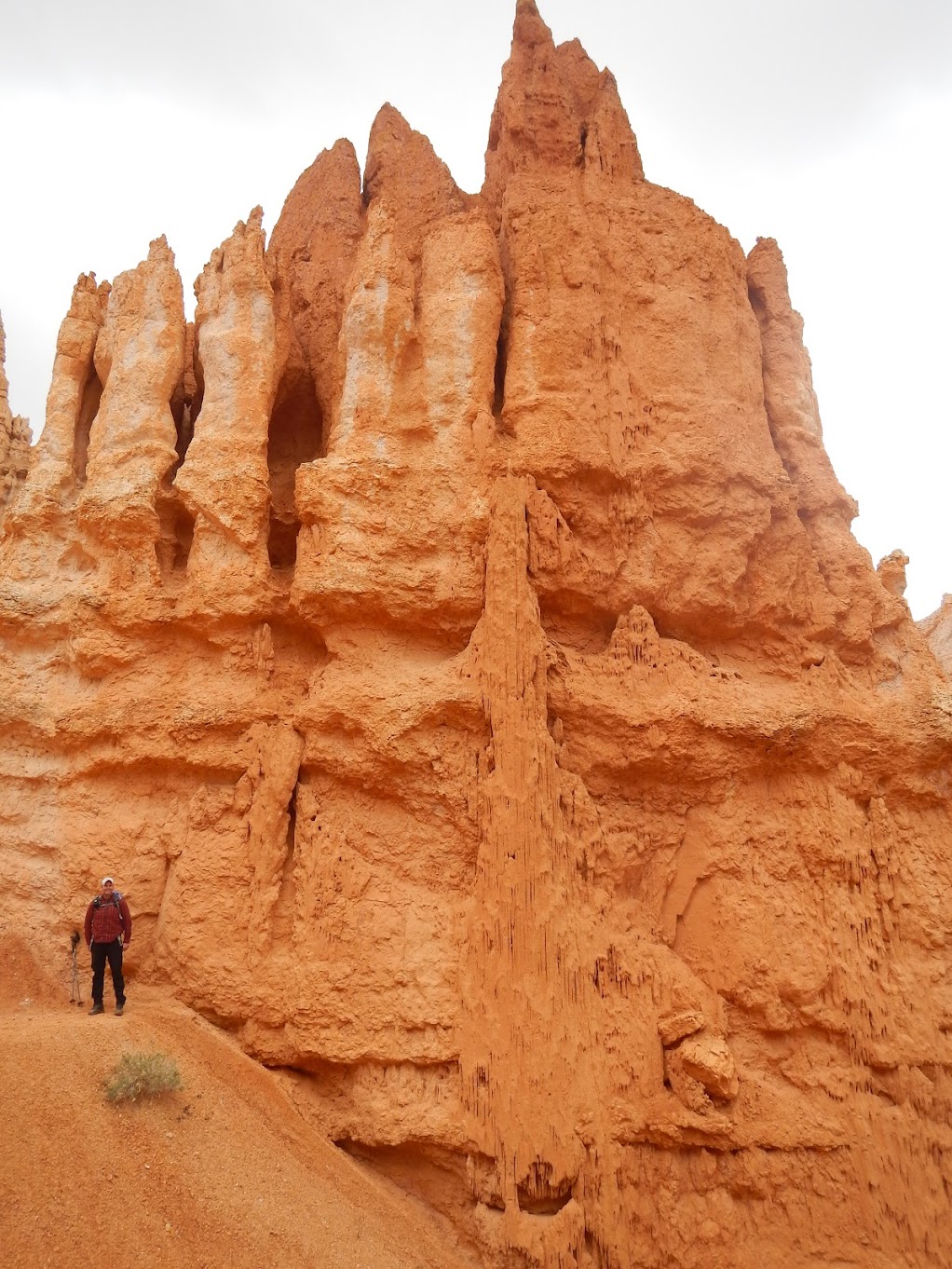 The eastern half of the Peekaboo Loop was relatively quiet. It was the furthest away from the parking area and passed by no named features on the map. It had clearly been visited, however, by tours on horseback. The stench of horse poop filled the air. It covered the trail, too, and made the whole deal feel quite unpleasant. I’m one of the few that thinks horses and hikers aren’t compatible trail users.

As we joined back up with the Queens Garden trail, we came back upon larger groups of tourists. Hmm…which was better, the mobs of clueless people on the trail or the disgusting horse manure? Hard to choose… 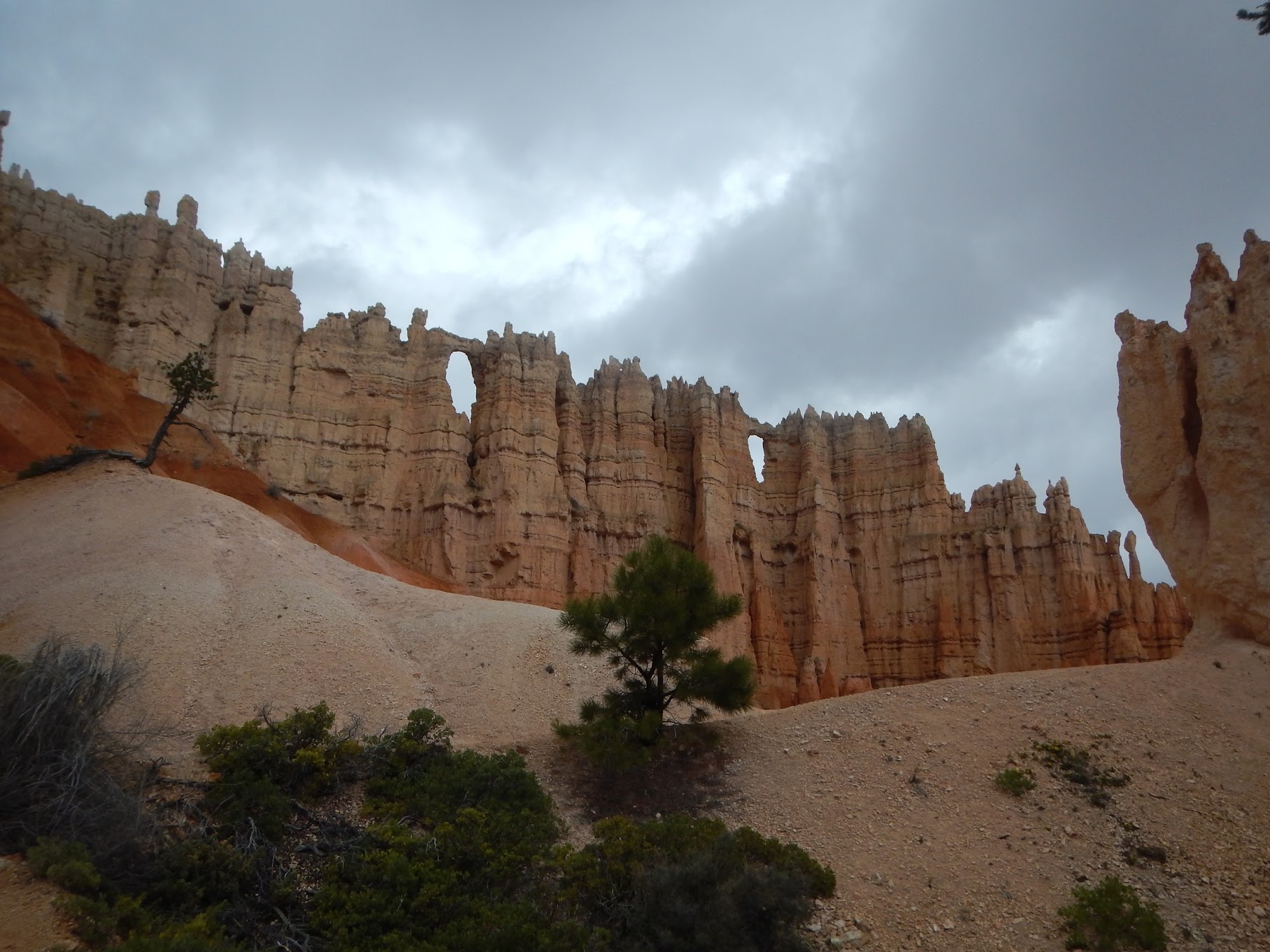 It was no matter, since the trail passed by such amazing scenery it was easy to ignore the masses. We walked past gnarled trees, painted hills, vast views, and curious hoodoos. Even the half-mile walk back to the car on the rim trail was enjoyable.

After the hike, we still had half the day ahead. We chose to head to the General Store, which had showers and laundry available. We took advantage of both. While waiting for our laundry to dry, we wrote postcards, played Quirkle and made plans for the remainder of our trip. It was actually a very nice way to spend the afternoon. We would be on the road for nearly three weeks, and this was our first of only 2 showers on the trip! 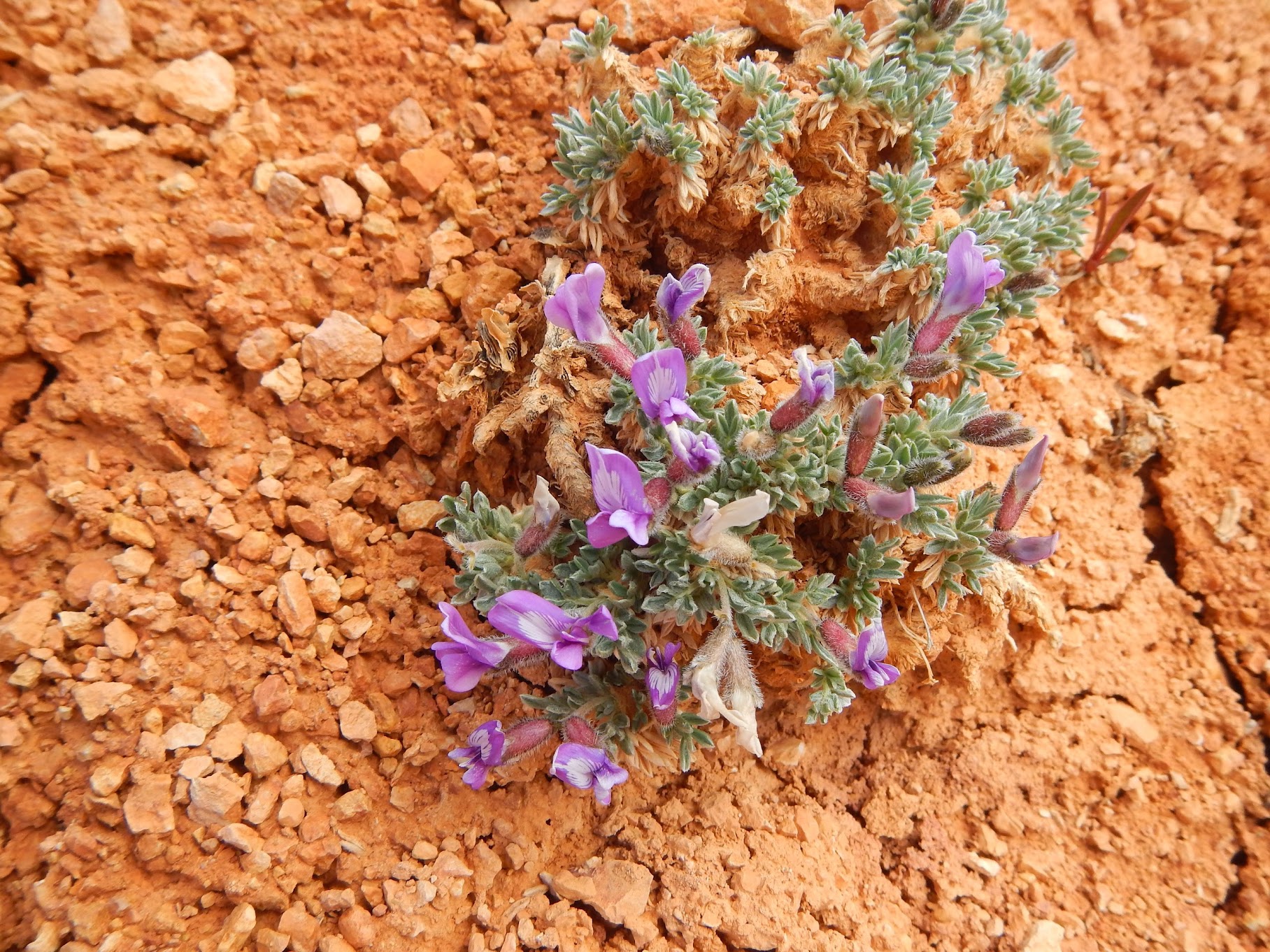 Who could pass up a trip through something named Fairyland Canyon? Apparently, a lot of people. We saved the best for last on our final hike in Bryce Canyon.

We began the loop from Fairyland Point, which is located at the end of a spur road that had no shuttle service. Already it felt more isolated than the other viewpoints in the canyon. Just like the other hikes, it began by climbing downhill. We’d gotten pretty used to the view by this point: orange and tan rock walls, hoodoos and other geologic features. There were bristlecone pine, Ponderosa pine, manzanita, and a few colorful wildflowers. But what made this hike special was the neverending diversity of sights to see along the way. Around every corner, a new surprise awaited us. It was difficult to travel at a steady pace because I stopped to take a photo every few minutes. The landscape was never short of stunning.

As we rounded a corner into Campbell Canyon, the trail took a number of sharp switchbacks as it negotiated its way up, down, around and through the jagged edges of the canyon. At the top of each rise, I felt very small amidst the hills, mountains and spires. I was inspired to create not one, but two photospheres at two locations along the trail. Take a look:

We stopped at the Tower Bridge viewpoint for a quick lunch, working hard to keep our sandwiches away from the circling chipmunks. From there, the ascent began past the China Wall and back up to the canyon rim for the 2.5 mile walk back to the car. On the way we passed another “Hike the Hoodoos” checkpoint, where we stopped to take an exuberant picture.

Actually it was more like 20 pictures, until Aaron got the timing right. Needless to say, my splits were feeling easier by the time he nailed the shot! 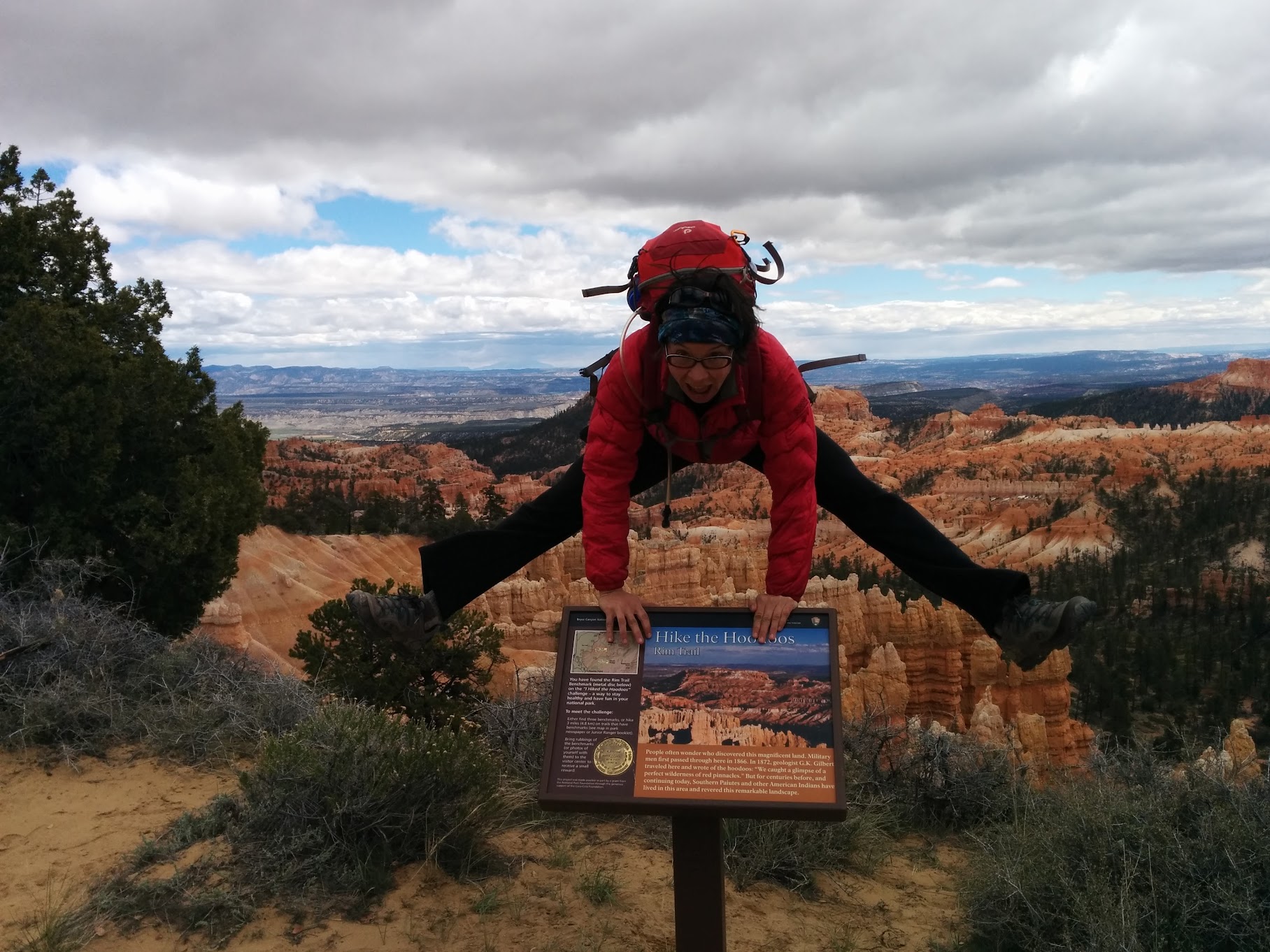 Driving back to camp, we saw a few pronghorn on the side of the road. While these were pretty common out in the desert, it was a rare sighting for us valley residents. We stopped and watched them for a few minutes before taking off.