View the photos from this part of the trip here. 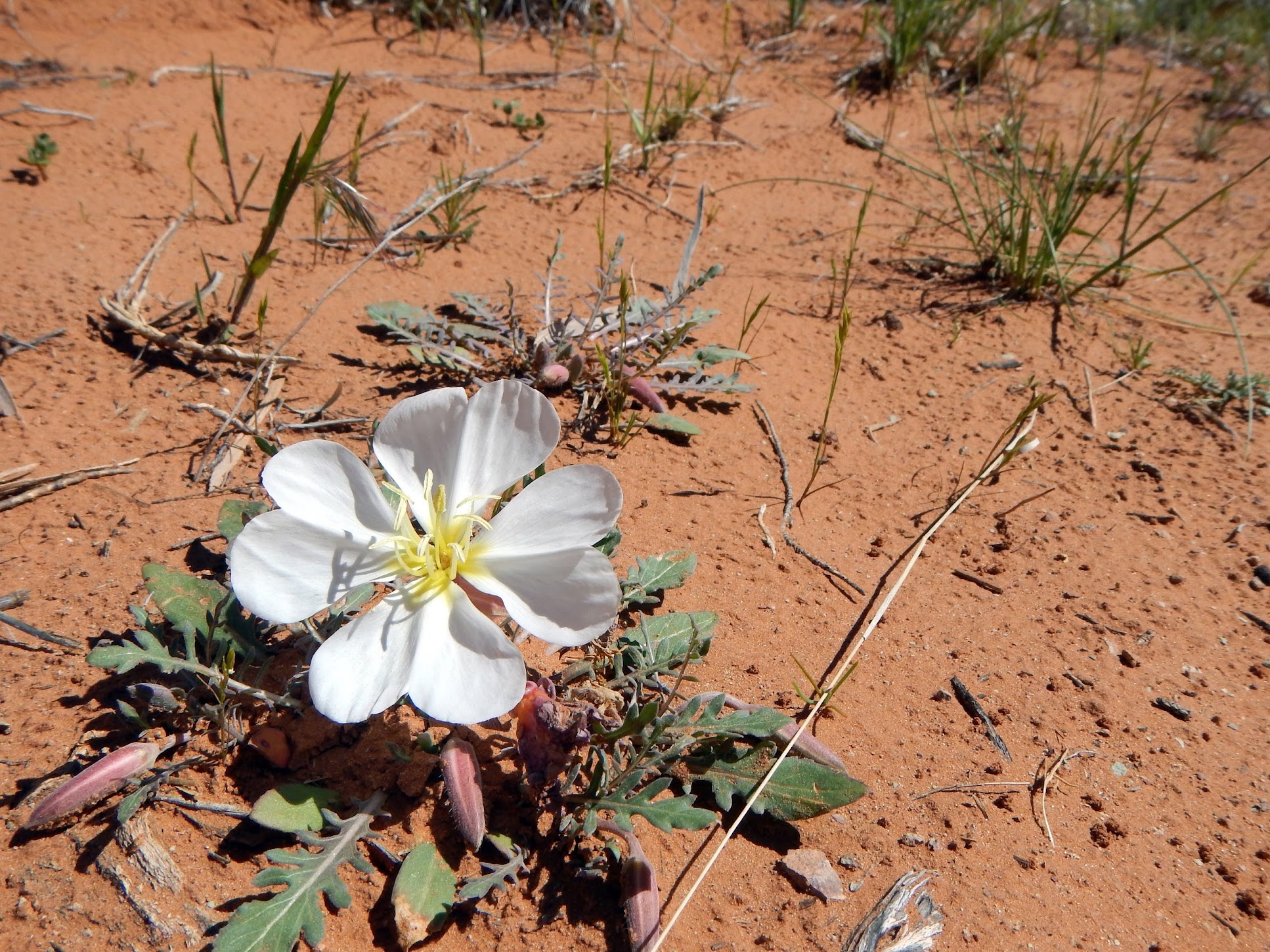 From Bryce Canyon, we headed for Kodachrome Basin State Park. It earned its name from a 1948 National Geographic Expedition to the park. They were thrilled to be able to present the spectacular colors of the park on brand new Kodachrome film, or something like that. Had these journalists visited, say, any other wild place in Utah they would have realized that this park was not exceptionally colorful. 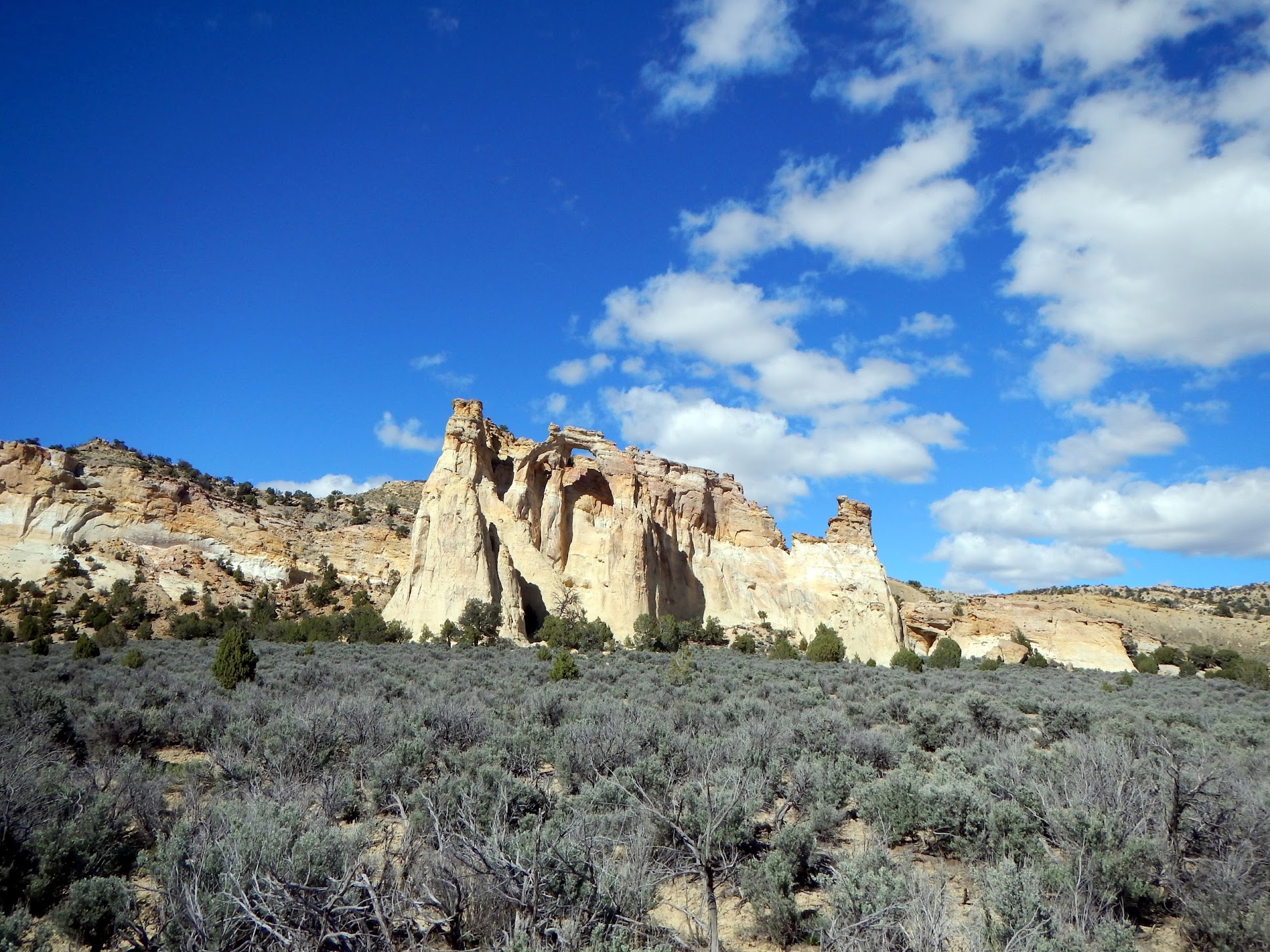 On the way, we made a quick detour to Grosvenor Arch. It’s not really on the way to anything, but it seemed like a worthwhile diversion. After much driving down gravel roads we pulled into the small parking area and took a short walk to the base of the arch. This arch, also named by the National Geographic Expedition, stands over 150 feet high and stretches 92 feet from one side to the other. Its double arch formation is unique, even among Utah’s extensive arch collection. A quick 10 minute leg stretch here, then it was off to find a campsite. We didn’t want to pay to camp at the state park, of course, so we found a little dirt pull off and camped among the sage. The wind attempted to blow us off the face of the earth but we persevered, and even had enough energy to make chili dogs before retreating to the shelter of the tent.

There was at least a half day of adventure waiting for us at the park. We began on the Panorama trail, a 6-mile loop that passed by several named formations and would serve as a good introduction to the park. Nearly the whole loop was exposed to the sun. Although it was cool for our 8 am start, I knew it would turn hot fast. 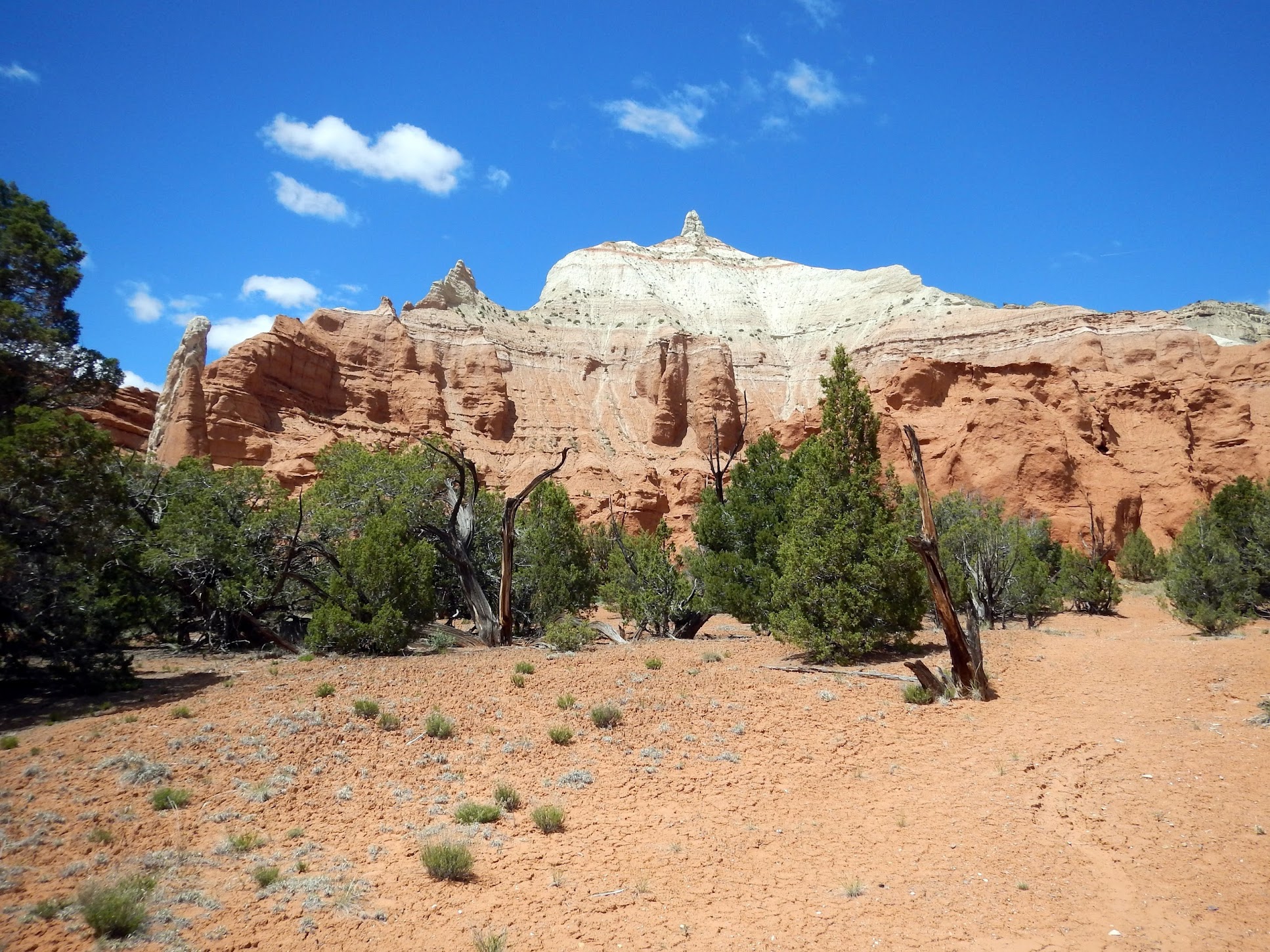 Signs in the visitor’s center and throughout the park educated us about the geology and wildlife here. We were mindful not to step on the cryptobiotic soil due to reading the “don’t bust the crust!” signage. These special soils, essential to the desert ecosystem, are sculpted and held in place by tiny microorganisms like cyanobacteria. The organisms can help the soil retain moisture and resist erosion. But they are terribly fragile, so stepping off trail was a big no-no.

Staying on the trail, we observed several rock spires, colored in browns, yellows and reds. We saw cactus, wildflowers, and hardy desert shrubs. The trail mostly passed through wide plains dotted with vegetation, but in a few areas we squeezed between rock walls and negotiated sharp turns that avoided trees, seasonal streams and rock features. 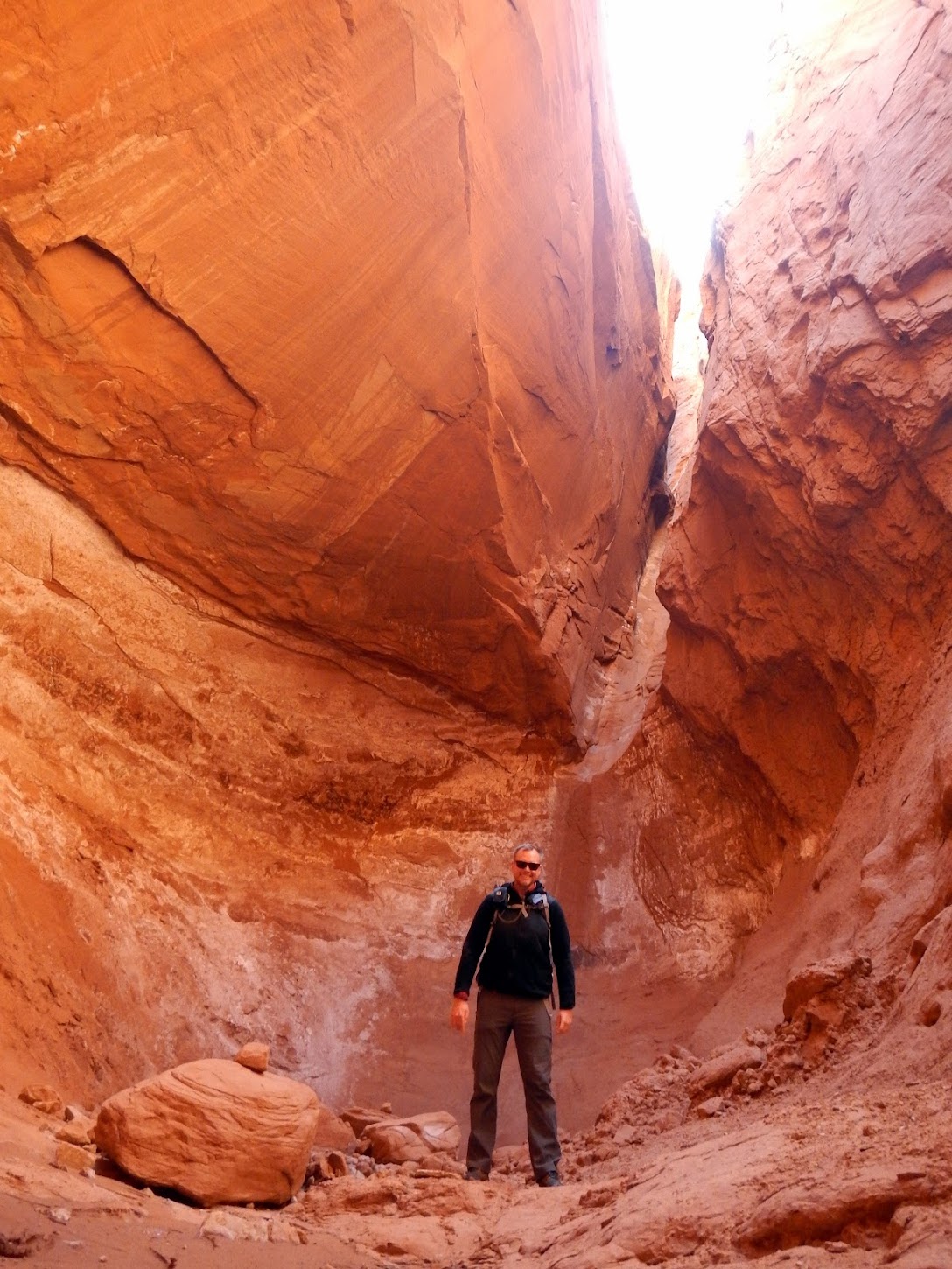 A couple of spots were remarkable, but the loop as a whole was pretty ho-hum. Cool cave, which wasn’t really a cave at all, was an interesting rock feature with tall walls. The floor was hardened mud, and it looked like at any moment the walls could come sliding down.

Indian Cave, also not a cave, and not even on the map, was the second feature of note. Its walls were scarred with what looked like numerous deep hand prints. It must soften considerably when there’s any rain so that people can create hand-shaped scars in the rock. At least that’s my best guess. Although there was a sign for ”Indian Cave,” and yes, the quotation marks were even on the sign, it was not indicated on the map. Curious. 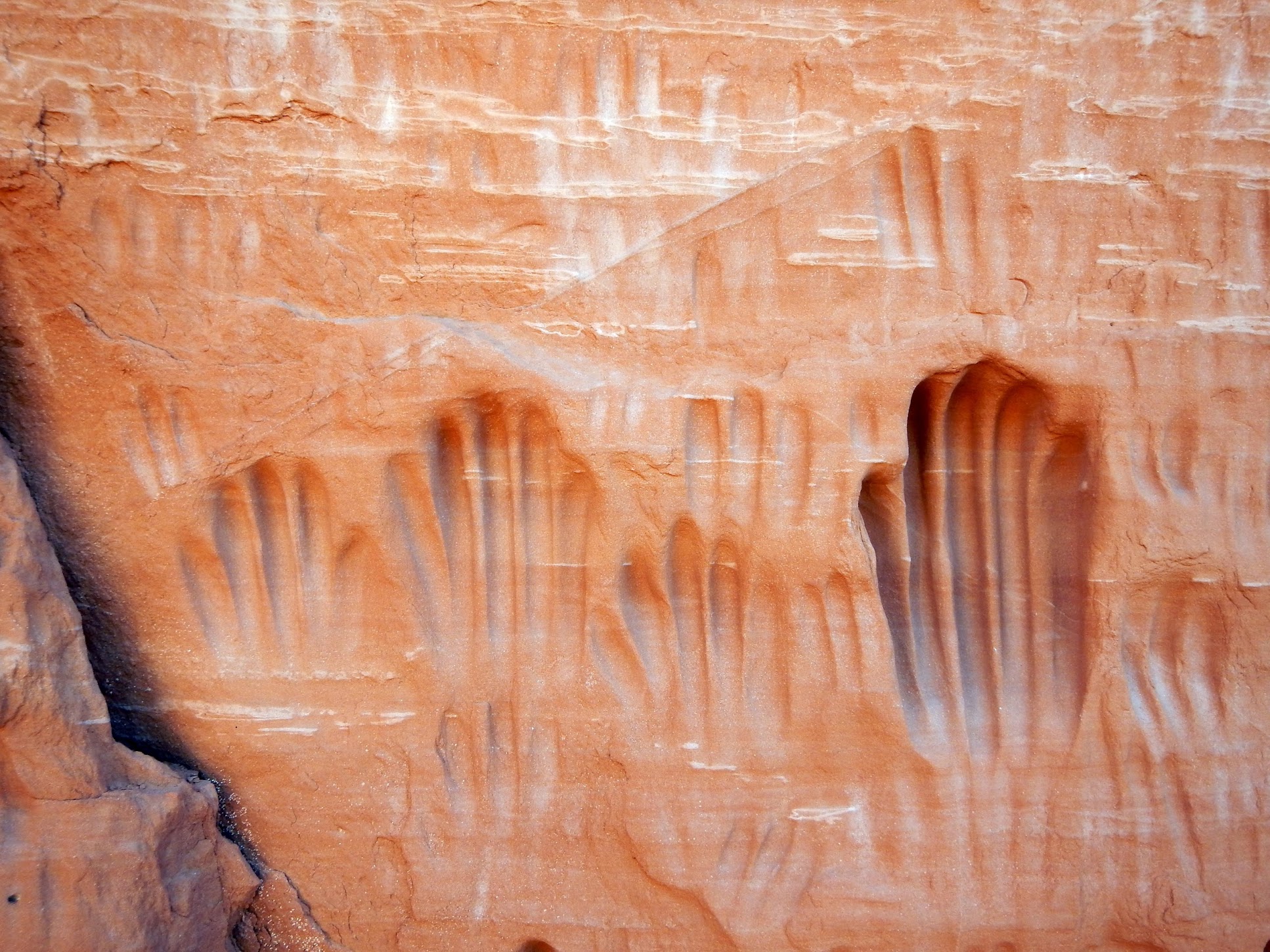 After that, we took a half-mile jaunt on the Nature Trail. Short but sweet, this trail was packed with informational signage that went into detail about the native plants and human history. It was a pleasant hike and I enjoyed the educational aspect as well. But now it was hot, we were hungry, and it was time to eat. 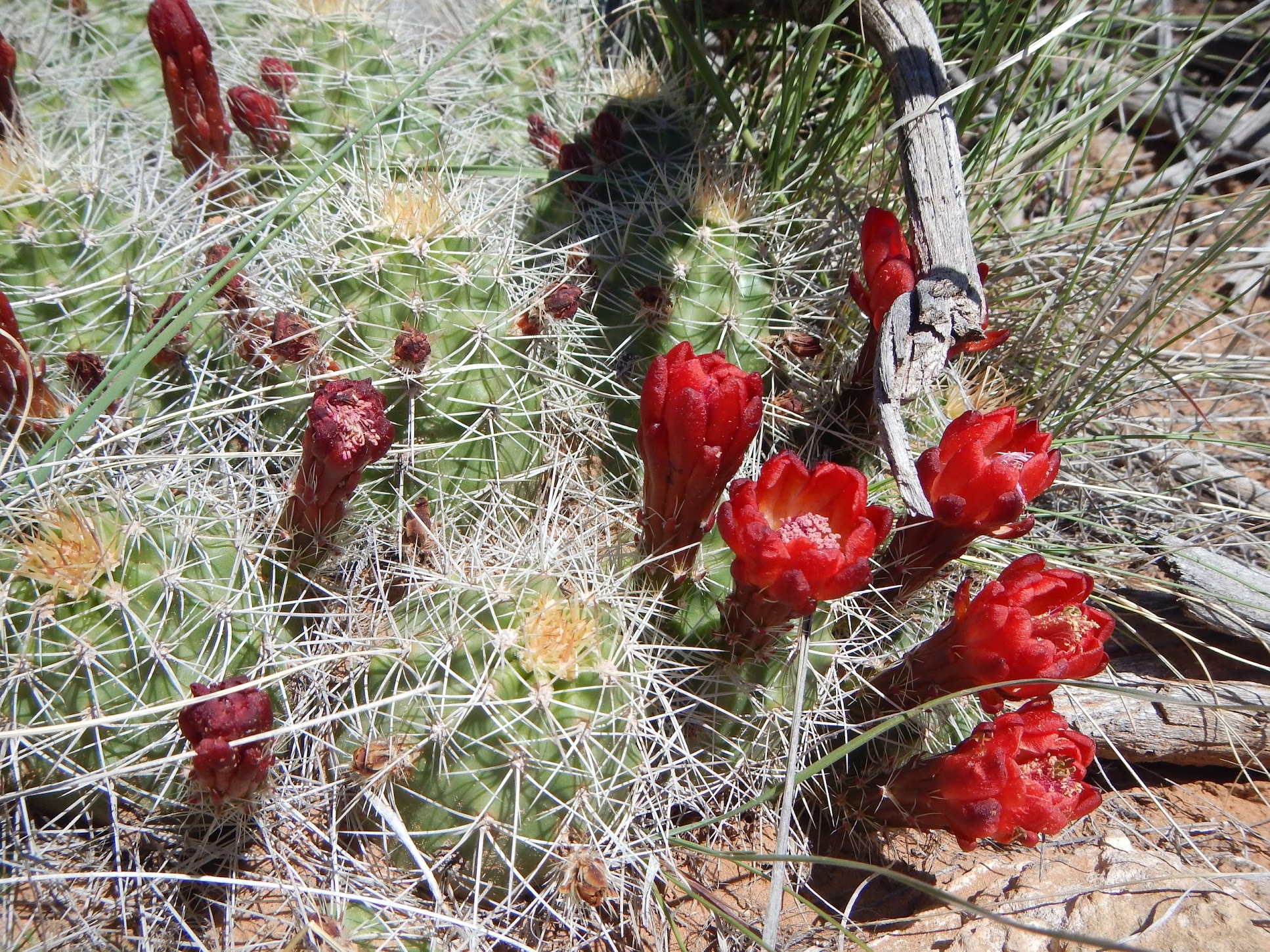 I dug into the cooler and built a nice plate of tuna salad and we purchased some cold drinks from the General Store. We finished up with an ice cream bar and then made one more stop: Chimney Rock. This was another ho-hum stop, but the surrounding scenery was quite, well, scenic. Cotton ball clouds floated across the bright blue sky. 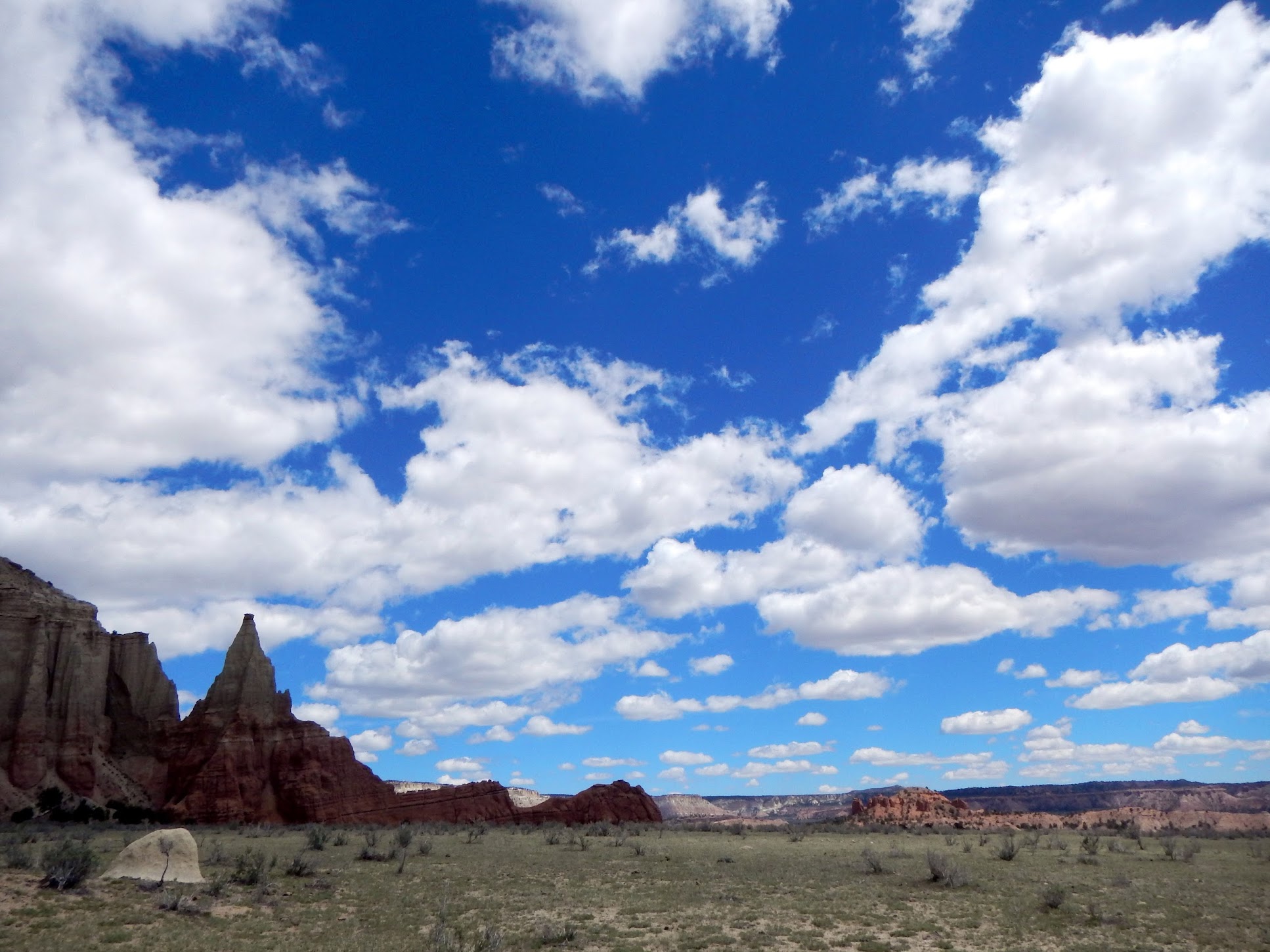 It was only a brief stop. We said farewell to the park, since there was some driving to do to get to our next spot: Capitol Reef.