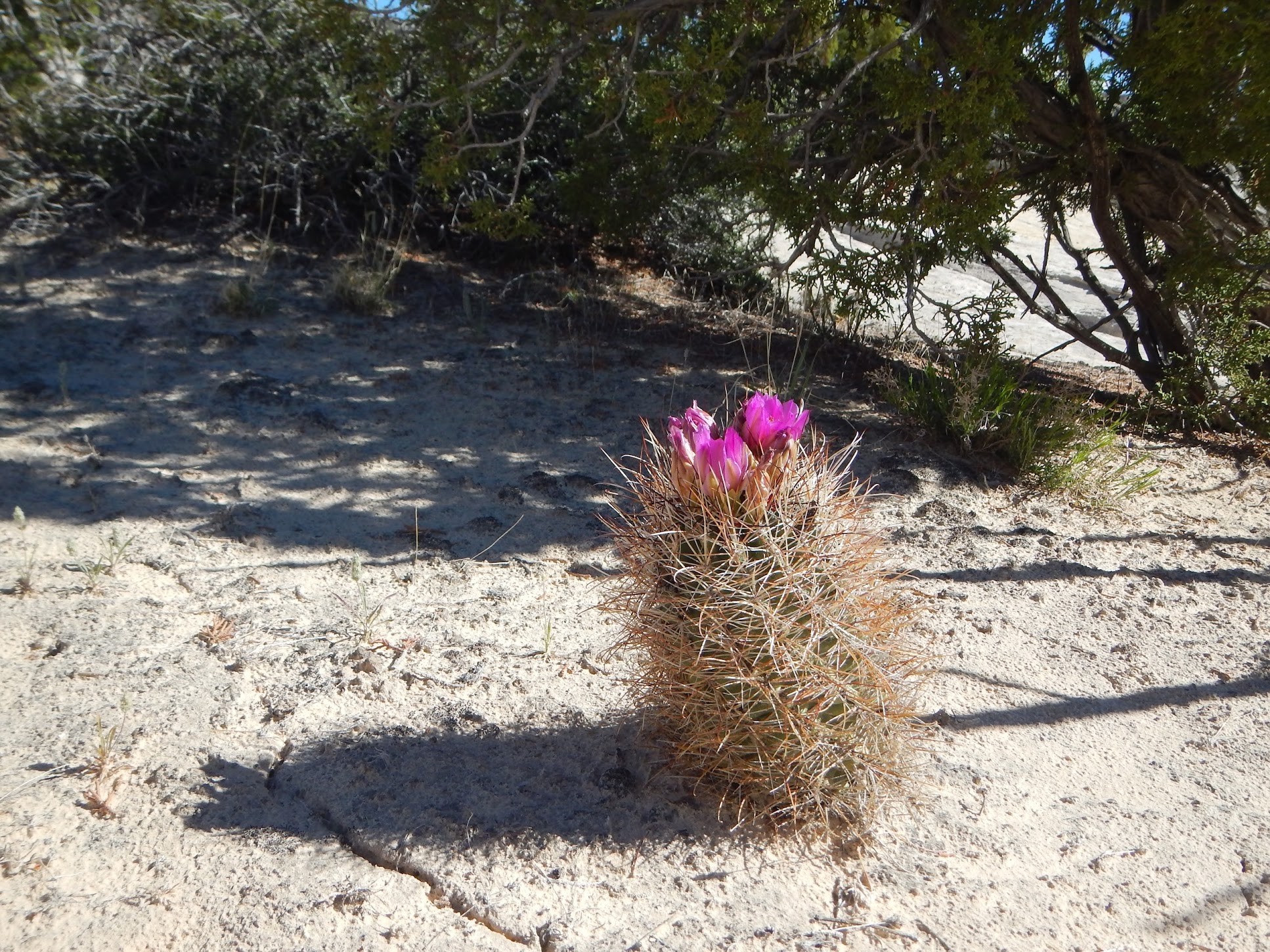 View the photos from this part of the trip here.

I’d never heard of Capitol Reef National Park until partway through our road trip. Spending hours riding passenger in a car, I had plenty of time to leaf through all the pages of my Zion + Bryce guidebook. The authors sneaked in a few other parks, including Capitol Reef. And a sweet little 15 mile canyon hike caught my eye. It was…kind of on our way back…so we took a detour to explore this off-the-beaten path destination.

We explored dramatic canyons, lounged under ancient cottonwood trees, ate freshly baked cinnamon rolls and rumbled down endless gravel roads. As soon as we left, I wanted to go back again.

The drive to this hike was just about as interesting as the hike itself. In order to into the National Park, we had to cross the Waterpocket Fold, a 100-ish mile long buckle in the Earth’s crust that made travel close to impossible for early settlers and native people. One of the only passageways follows the Burr Trail, established in the late 1870’s to move cattle from the grazing grounds to the market. Today it is still a primitive gravel road that includes an impressive series of tight switchbacks that makes you cling to the edge of your seat. It is impassable in wet weather, so we checked at the Visitor’s Center before attempting this difficult drive. 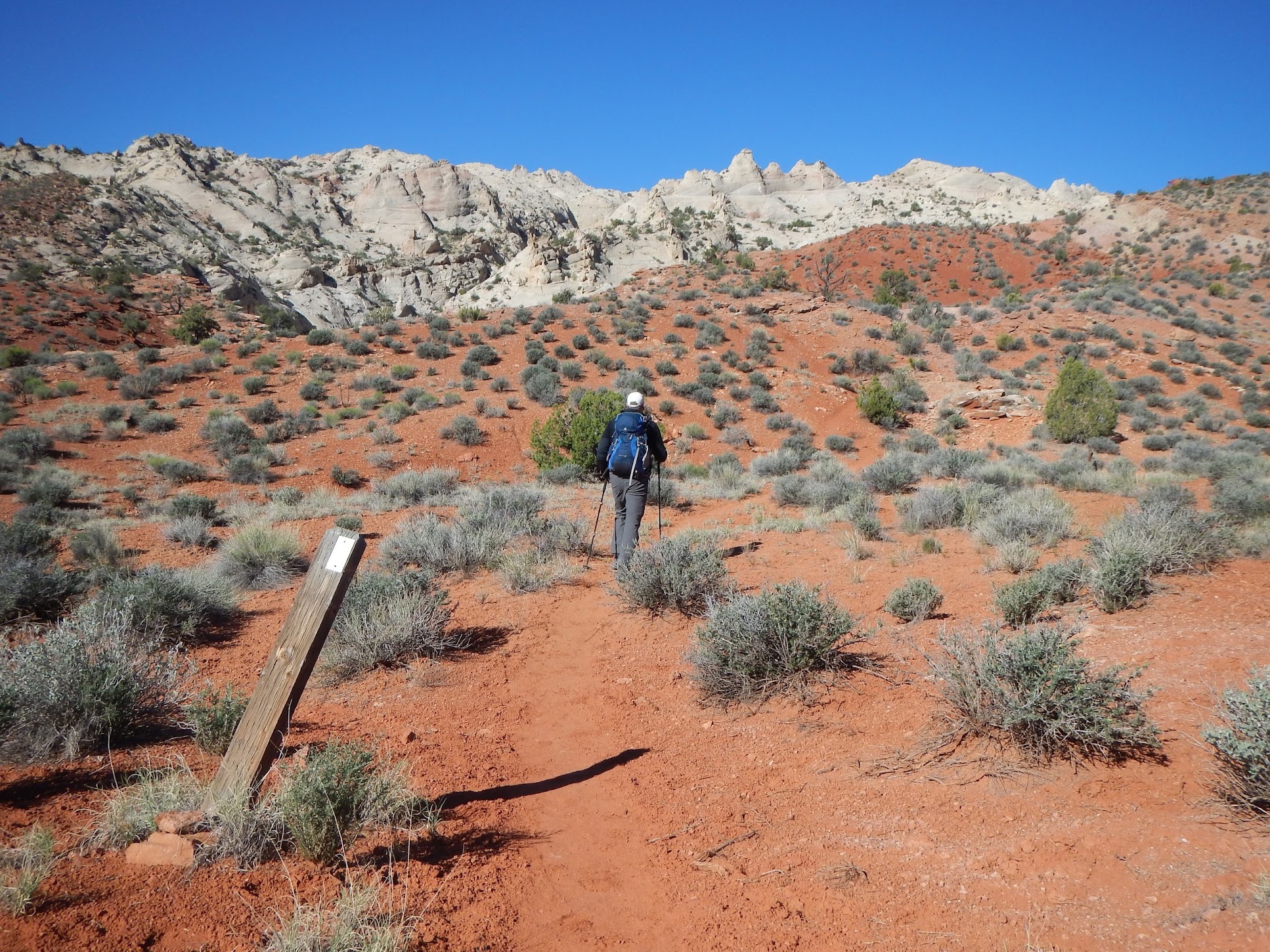 Our hike began on the broad, hot desert floor. We followed cairns across scrubland and slickrock to the canyon entrance. As we dropped into the canyon, Aaron’s eagle eyes noticed an arrowhead laying on the sand. We admired it and left it behind for someone else to discover, as I’m sure others before us had done.

The canyon itself was mostly pretty wide. To our left, massive rock walls rose seemingly straight up for hundreds of feet. To our right, the canyon floor gradually rose up to piles of rubble and boulders in the distance. All throughout the canyon, there were colorful wildflowers, shady cottonwood trees, and rocks of all shapes and sizes. Butterflies swirled around randomly, songbirds flitted from tree to tree and lizards scampered into hiding as we passed by. It was an idyllic scene, so pretty and quiet and alive. 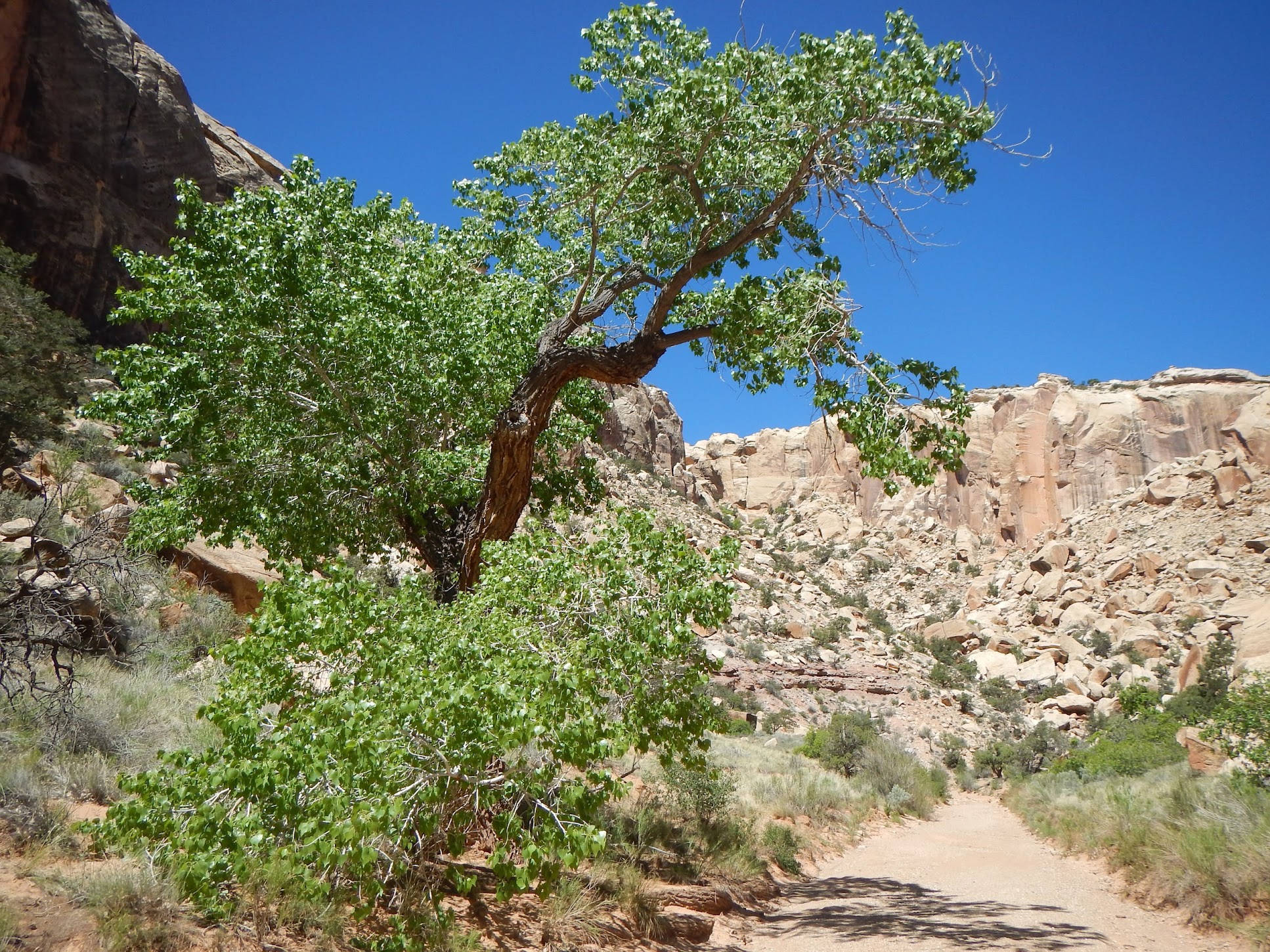 This canyon felt impossibly big. And there was barely a sound to be heard. Hiking for hours, just the two of us, in this expansive place, made me feel very alive. To get a sense of what it was like, click the photosphere link in the gray box below.

The steep canyon walls alternated from vertical to overhanging. Some of the overhangs were so great that it felt as if we were walking inside a cave. Shade came over us, dropping the air temperature considerably. The ground was damp, with occasional streamlets of running water. These provided conveniently spaced rest breaks to get away from the ever intensifying sun. 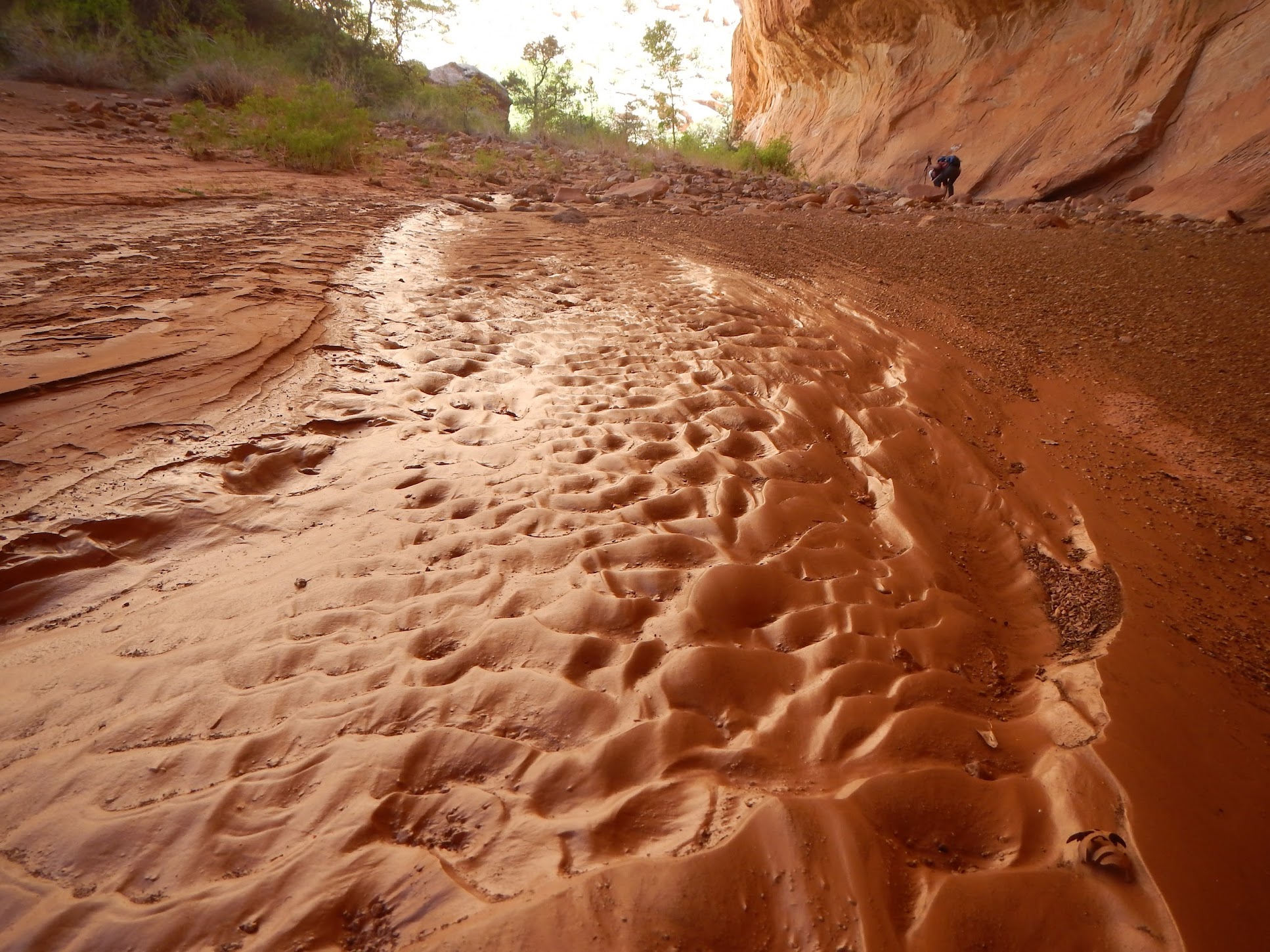 As we were nearing the end of the canyon we encountered two other hikers heading in the opposite direction, the only people we’d see on the trail all day. Then, the canyon took a quick turn and the walls closed in on either side of us. We’d reached the alleged Narrows. After seeing so many photos of Utah’s slot canyons, it didn’t feel particularly dramatic. The rest of the walk so far, though, had been well worth the drive out here.

We exited the canyon and climbed back up to the dry, desert wash from which we started. Except we were still 5 miles from the car. It was the hottest part of the day, and there was one shade tree along the entire stretch back. We drank up all our water as we hoofed it back to the car. Capitol Reef had already knocked our socks off, what could we possibly do next?

Camping in the Oyster Beds

We drove into the only campground in the park late in the afternoon, and all the spots were already taken. Not being familiar with the area, we then drove around somewhat aimlessly to try and find a road on public land outside the park to set up camp for the night.

We were tired, and kept hitting dead ends. Finally we pulled into a desolate looking stretch of land along a side road, just on the other side of a hill from the main byway. It would do.

Aaron got to setting up a minimal camp while I prepared a home-dehydrated meal for a quick dinner. As the food was soaking I wandered around our new accommodations. It was an unusual-looking place, very gray and covered in lots of little rocks. I picked up some of these “rocks,” and on closer examination found quite a number of oyster fossils. I remembered seeing oyster shells on a geology pamphlet we’d picked up earlier and I guess we’d stumbled into that particular formation. It was cool to think we were camping in an ancient sea bed. I rambled around the campsite, picking up rocks and treasures until daylight faded, and it was time to head into the tent. 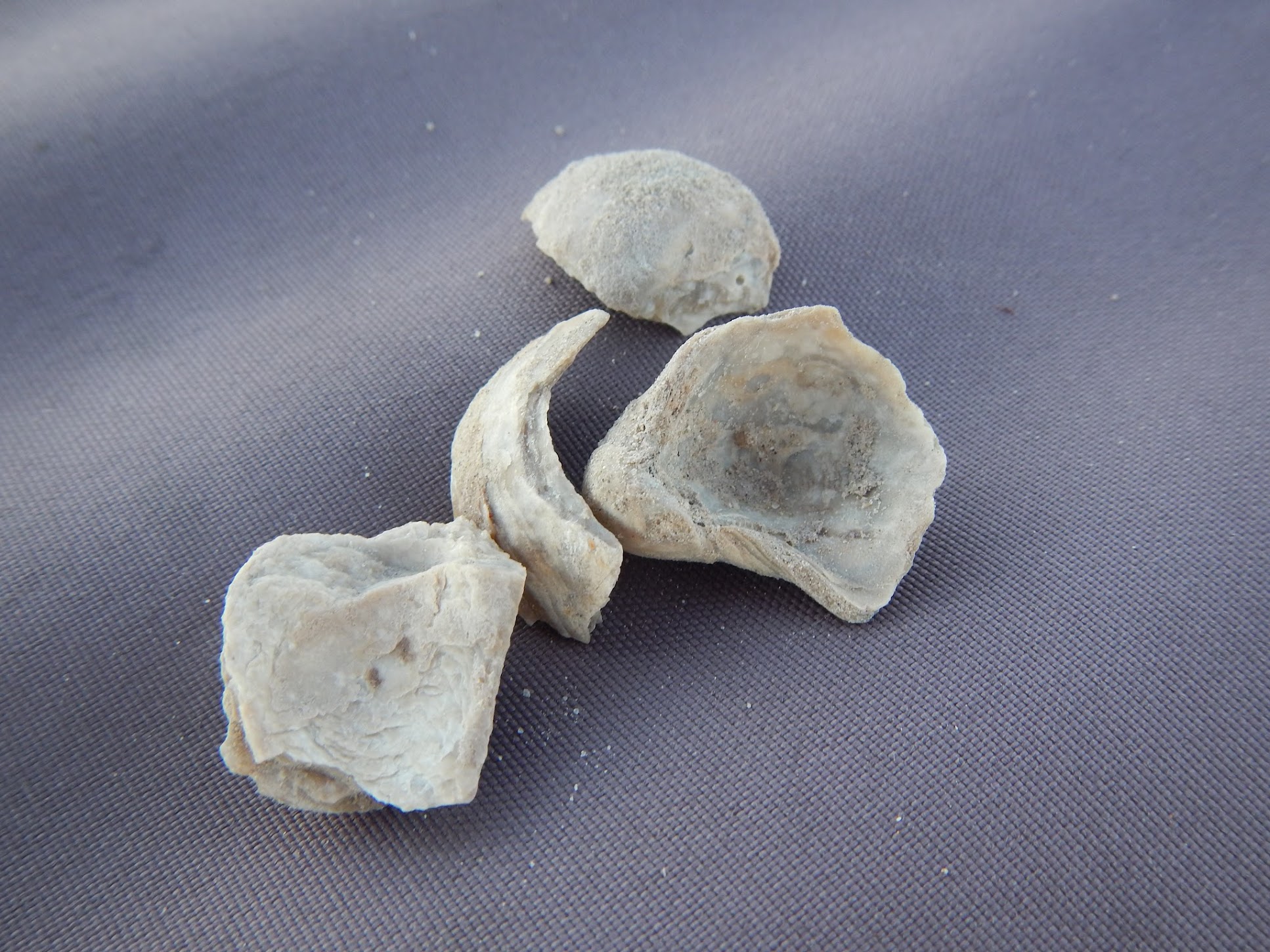 We earned an easy day after our long trek in Lower Muley Twist so we decided to do a tourist day. First we grabbed an open campsite at the Fruita Campground, then drove to the Gifford House to check out their wares. The gift shop was full of trinkets and treats. We bought a peach pie, a cinnamon roll, and some coffee to share for breakfast on the patio. Aaron was excited to read through the history of the settlers that shared his same last name.

Next we walked around the Visitor’s Center, wrote some postcards and listened to the geology talk at the Visitor’s Center. We also picked up a scenic drive brochure for $2 that I could narrate as we drove through the main road leading into the canyon.

All that sitting around had to be countered by some walking. Our first jaunt was a couple miles in the Grand Wash. We hiked to the narrows and back, admiring many wildflowers, interesting rocks, and tall canyon walls.

Next we hiked Capitol Gorge to the Tanks trail. Along the way, we saw the Pioneer Register. High on the canyon walls, travelers from decades long past had painstakingly carved their names into the rock. I wondered why the names were so high up on the wall. Perhaps there had been lots of erosion since the names were carved? Aaron thought the pioneers had made the carvings while sitting atop their horses or wagons. As we continued walking it was hard not to think about the challenges that trekking across this terrain brought to early visitors. We had it easy. 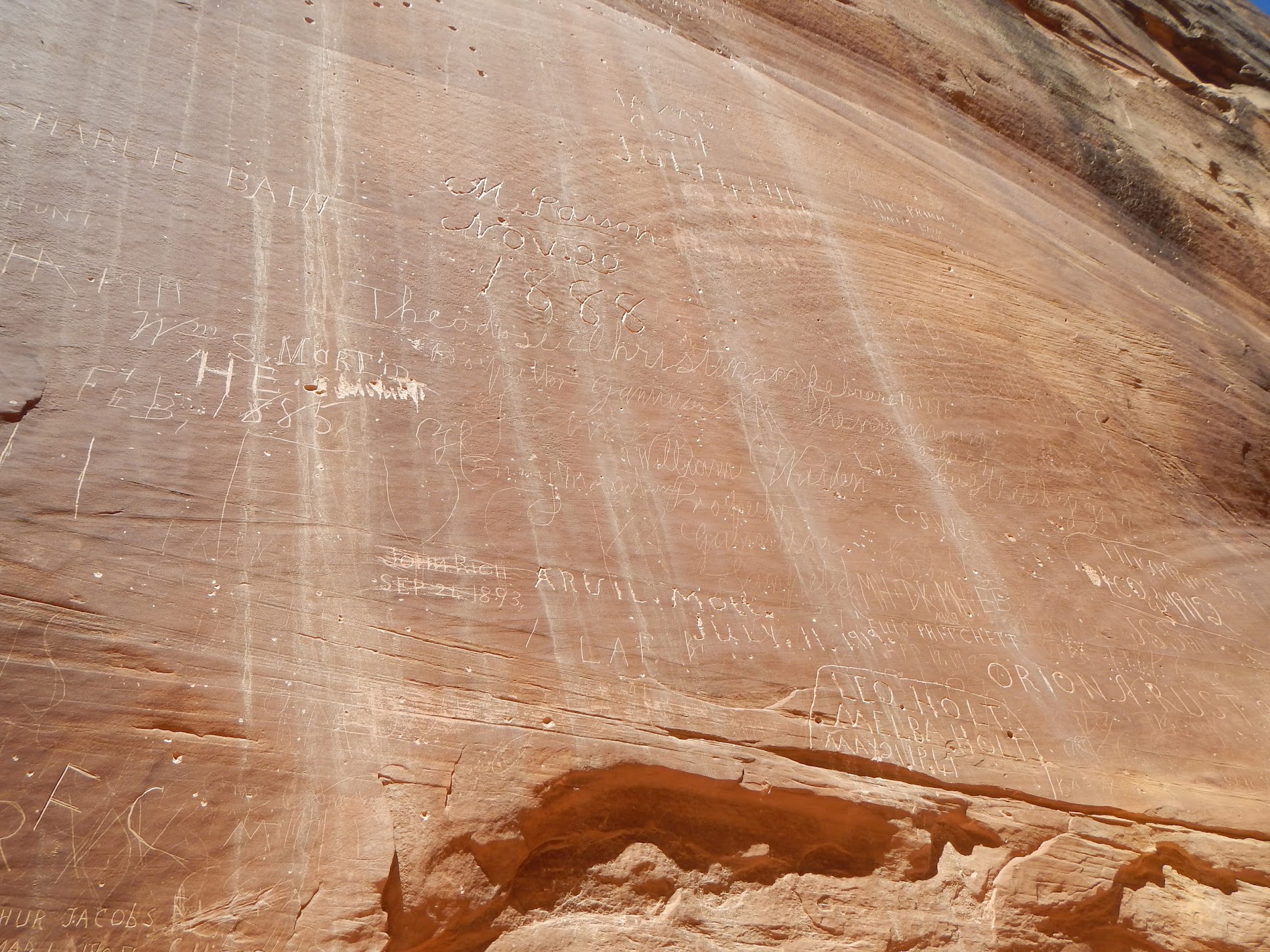 A short side trail led up to the “Tanks,” a series of depressions in the rock that hold water. Unfortunately, all the tanks we found were dry, so we didn’t get the cool pictures that we’d seen elsewhere. Our consolation prize was a great overview of the canyon from our high perch. 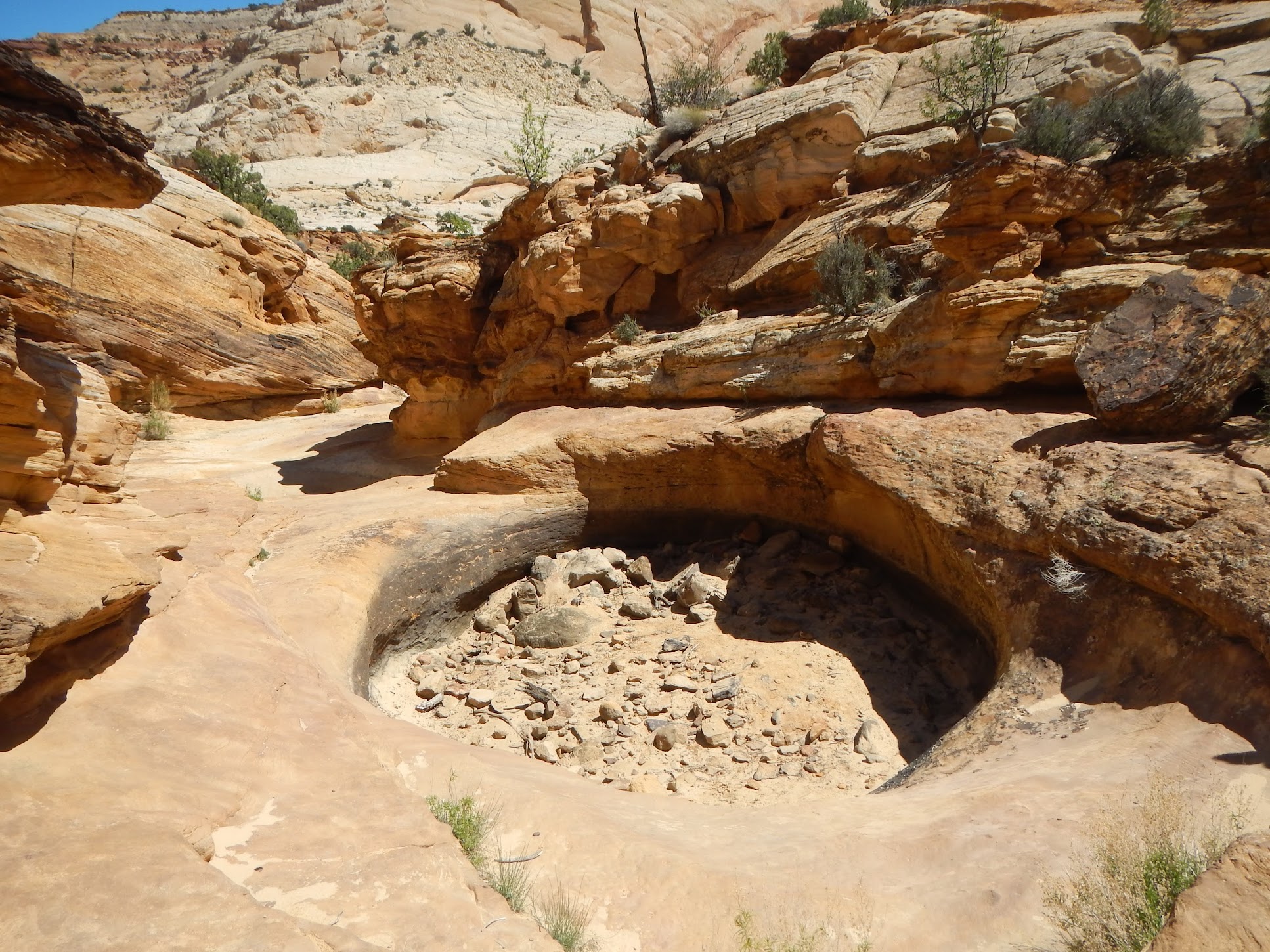 After our flip-flopper hikes we drove back to Gifford House. It was even hotter now, and we knew they had ice cream. We took our ice cream to the lush, green field across the road that was shaded by massive cottonwood trees. There, we sat on the grass and enjoyed our cold treats. We waited out the heat of the day relaxing and reading and dreaming of simpler times. 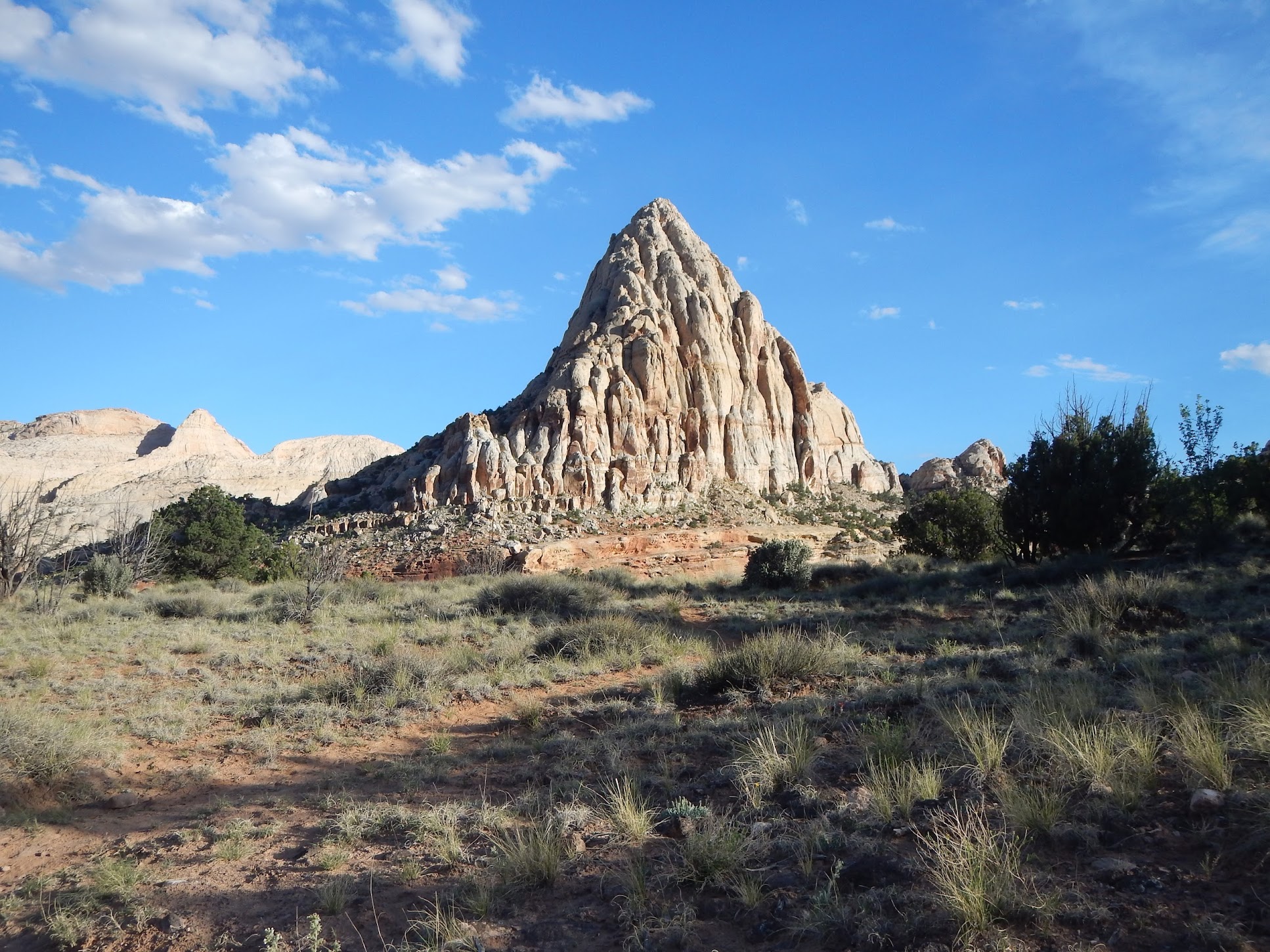 Later that evening we sneaked in one more hike to Hickman Natural Bridge. I decided to go barefoot for this one. For 50 cents I grabbed an interpretive brochure at the trail head. As we walked up the trail, we stopped at each numbered post as I read the appropriate factoid from the brochure. We learned about the native Fremont people, geological events, and the flora and fauna. As I mindfully stepped across the alternating sand, rock, and gravel, I took plenty of time to look around and appreciate the very special place we had decided to visit. The landscape around us was ripe with history. Enormous rock formations broke up the horizon in all directions. We’d just scratched the surface and it was already time to leave.

Bryce Canyon, Zion, and Arches sure do have better PR than Capitol Reef, but this quirky little park is no less spectacular than any of those. It will soon be time to return to this part of the country to pick up where we left off.