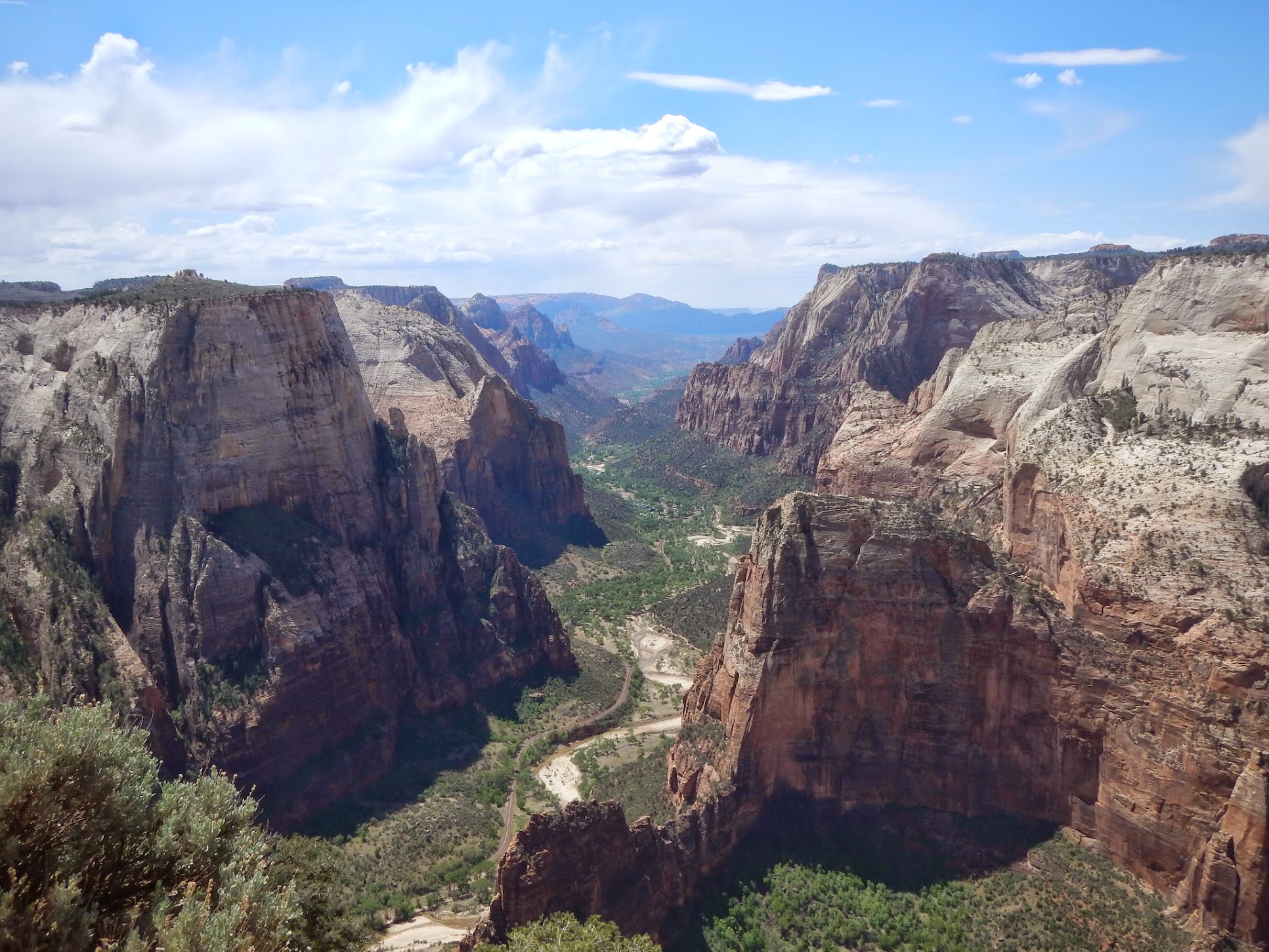 We went to Zion for one reason: to climb North Guardian Angel with my friend Rick. But we had a couple days to kill before the climb, so we took on all the popular hiking trails in just a few short days.

After a quick evening stay at the Watchman Campground, we packed up and left early to grab a campsite at South Campground. Camping was kind of a nightmare here; by the time we rolled in, almost everything was full. The ranger at our entry point mentioned that sites tend to open up in the early morning when people leave, and we’d have a good chance at snagging one if we vultured around the campground around 8 am. That proved to be a good strategy, so once we found a site we were able to get out and go hiking.

The hike up to the best viewpoint in the park started out in the most annoying way possible. The trail is paved for most of the way, and apparently it was being maintained by some sort of trail Zamboni. This loud machine was grinding up the trail not too far behind us, traveling at roughly our pace. We just couldn’t get away from it.

Eventually the pavement became more and more broken up and the Zamboni came to a rest, leaving us to ascend in blessed silence as we approached Echo Canyon. 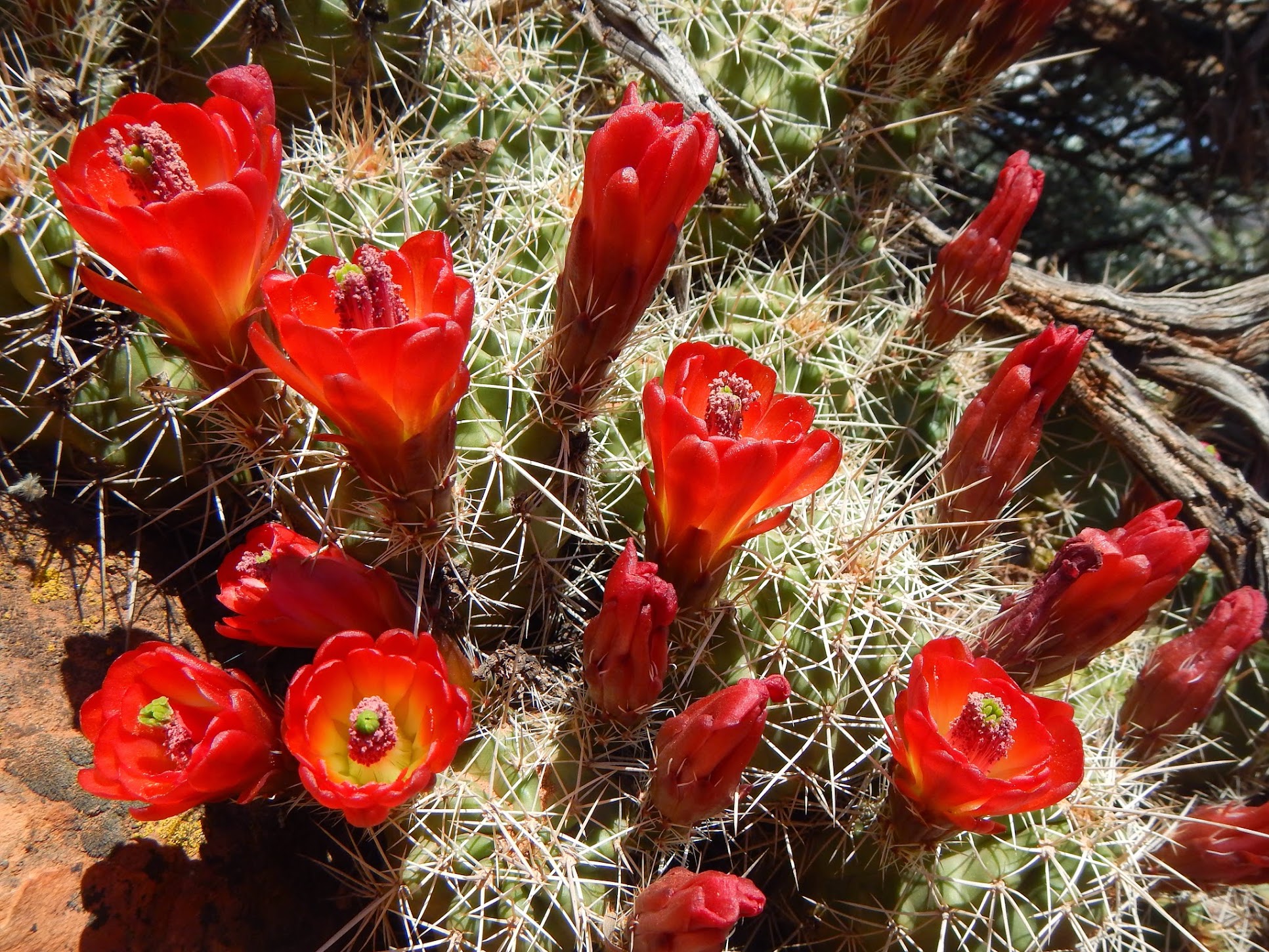 We continued into the canyon, then climbed right back out of it and into the sun. We hiked up and up, noting the unfamiliar desert vegetation as we climbed. Paintbrush sprung from the canyon walls, yucca and cactus threatened to poke us with their spiny leaves, and desert primrose cowered in the heat. We admired not only the tiny plant life but also the huge vistas and big walls. It was impossible to capture the immensity of it all on our cameras. It had to be experienced to be understood.

At the top, there were small groups and couples taking selfies and searching for shade. Chipmunks darted between our feet and dared to crawl into our backpacks, looking for food. The views were truly awe-inspiring. It was easy to hang out here for a long lunch.

On our way back down, we took two side trips: Weeping Rock, and…

After finishing most of the descent, we reached a junction that sent us hurtling back uphill towards Hidden Canyon. This trail was interesting, with several sections of narrow slickrock traversing (with chains) and steps cut right into the stone. People were totally freaking out at the chained section, which meant it was super fun to walk across. The official trail ended at the mouth of the canyon, but the hike description urged us to walk further. There was just one or two sections of moderate scrambling to get over short walls of rock, then the rest was easy wandering between the canyon walls. 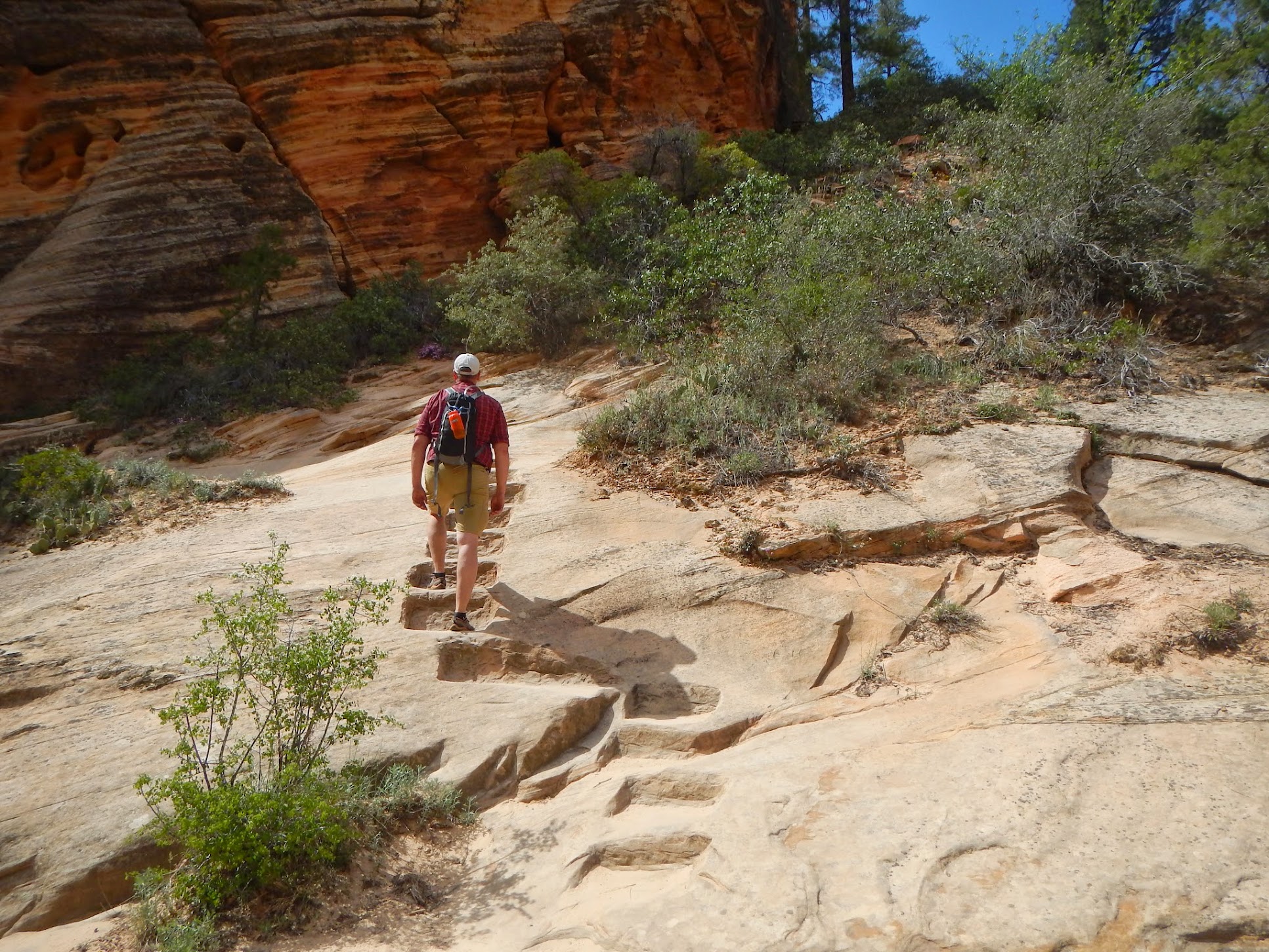 We walked as far as a small rock arch, less than a mile up the canyon, and decided to turn around. It was here that I decided to go barefoot. It always feels so nice to stretch out the feet after hiking all day in trail shoes.

We made one final detour before we returned to the shuttle. I had to put my shoes back on because this section was paved and the dark asphalt was burning hot. This stretch of trail was packed with tourists. That’s what you get for doing a quarter-mile long hike. 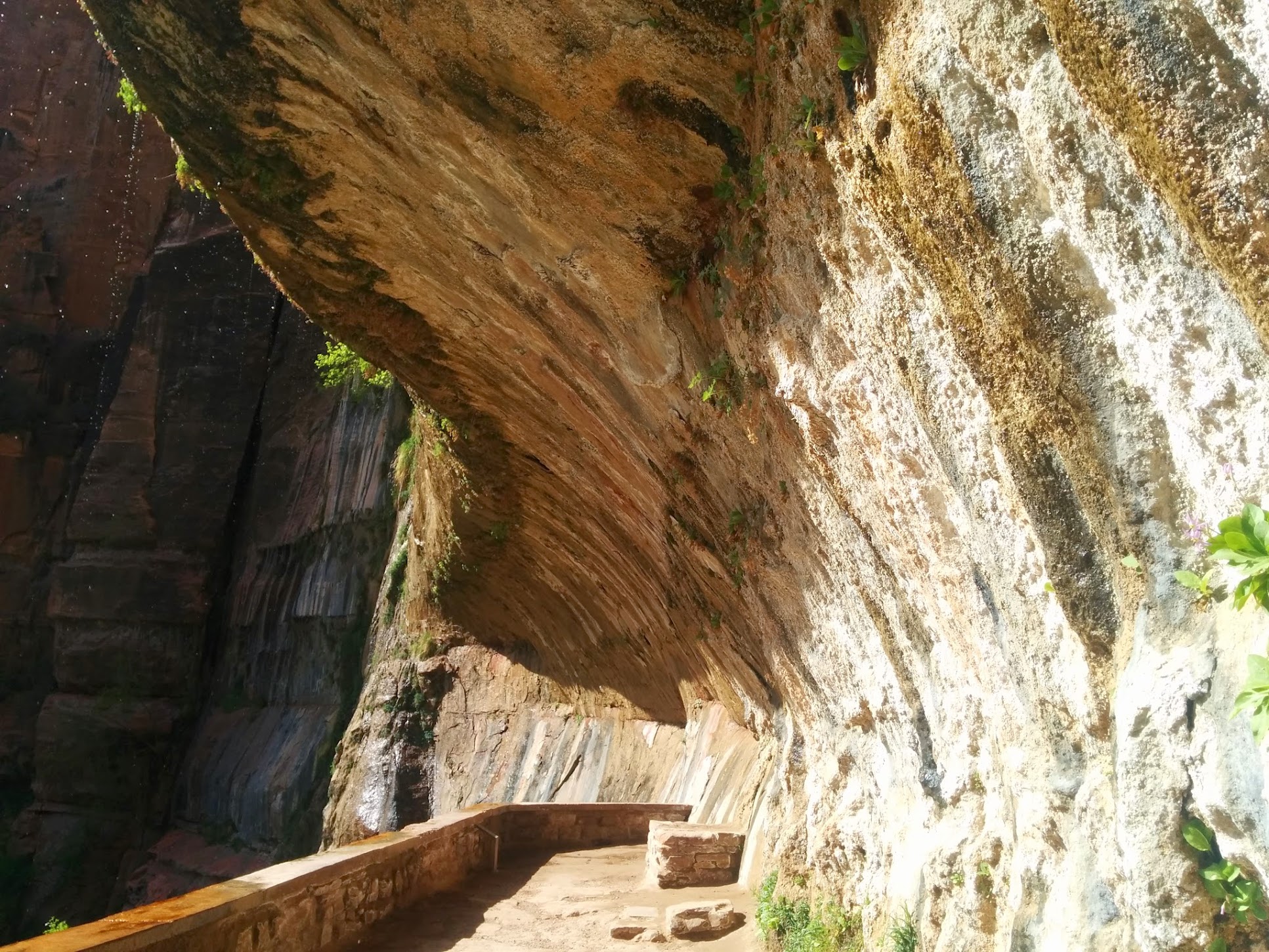 The main attraction of this short spur is Weeping Rock, the site of the park’s famed “hanging gardens.” My brain conjured up an image much more spectacular than what lay ahead of us, so I found it to be a huge disappointment. We’d seen so much cool stuff today anyways; it was time to go back.

The next morning we got up early so we could catch the first shuttle. All I’d read about Angels Landing was that it was the park’s marquee hiking attraction. Zillions of people would be aiming for this trail today, so the only way I’d go up there was if we could get a head start on the mob.

We began this hike, thankfully, in the shade. It’s a steep climb right off the bat. Soon we reached the famed “Walter’s Wiggles,” a section of hairpin switchbacks cut right into the rock. They were brilliantly engineered to allow anyone with enough leg and lung power to hike up to the base of Angels Landing. Then, the fun began. 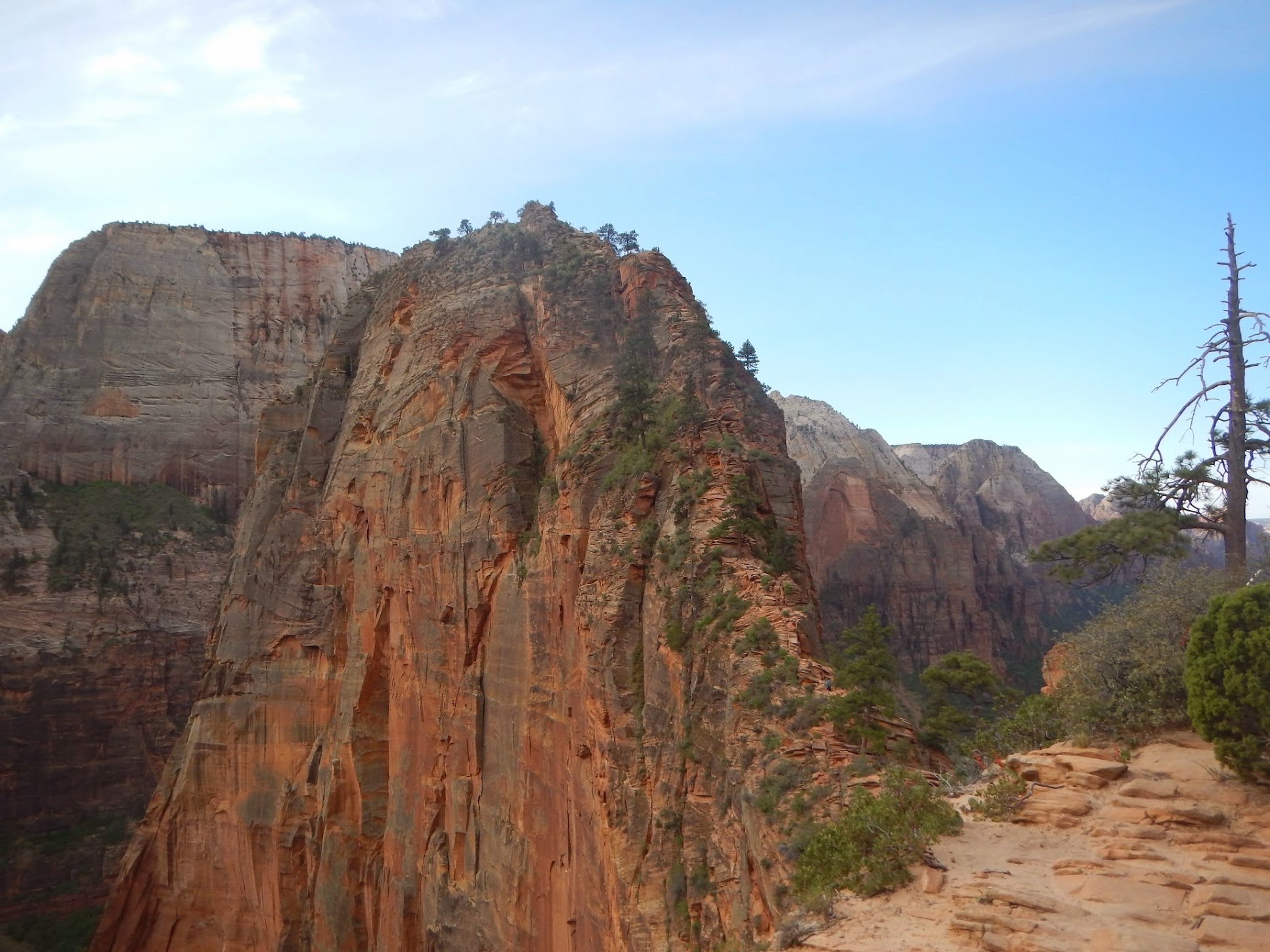 At Scout Lookout, or chicken-out point, or whatever it is, people generally decide whether to proceed or not. Beyond this point is the notorious narrow trail section that has chains to hold on to. We were set on reaching the summit, and my goal was to proceed without using the chains at all.

It was a beautiful walk with the early morning sun enhancing the red, orange and yellow hues on the rock. The trail was way more mellow than I was anticipating, and it never felt particularly scary or dangerous. Of course, if I were on this trail when it was loaded with people, I would definitely be concerned about the ability of the masses to safely negotiate others on this route. I was happy we were up here essentially alone. 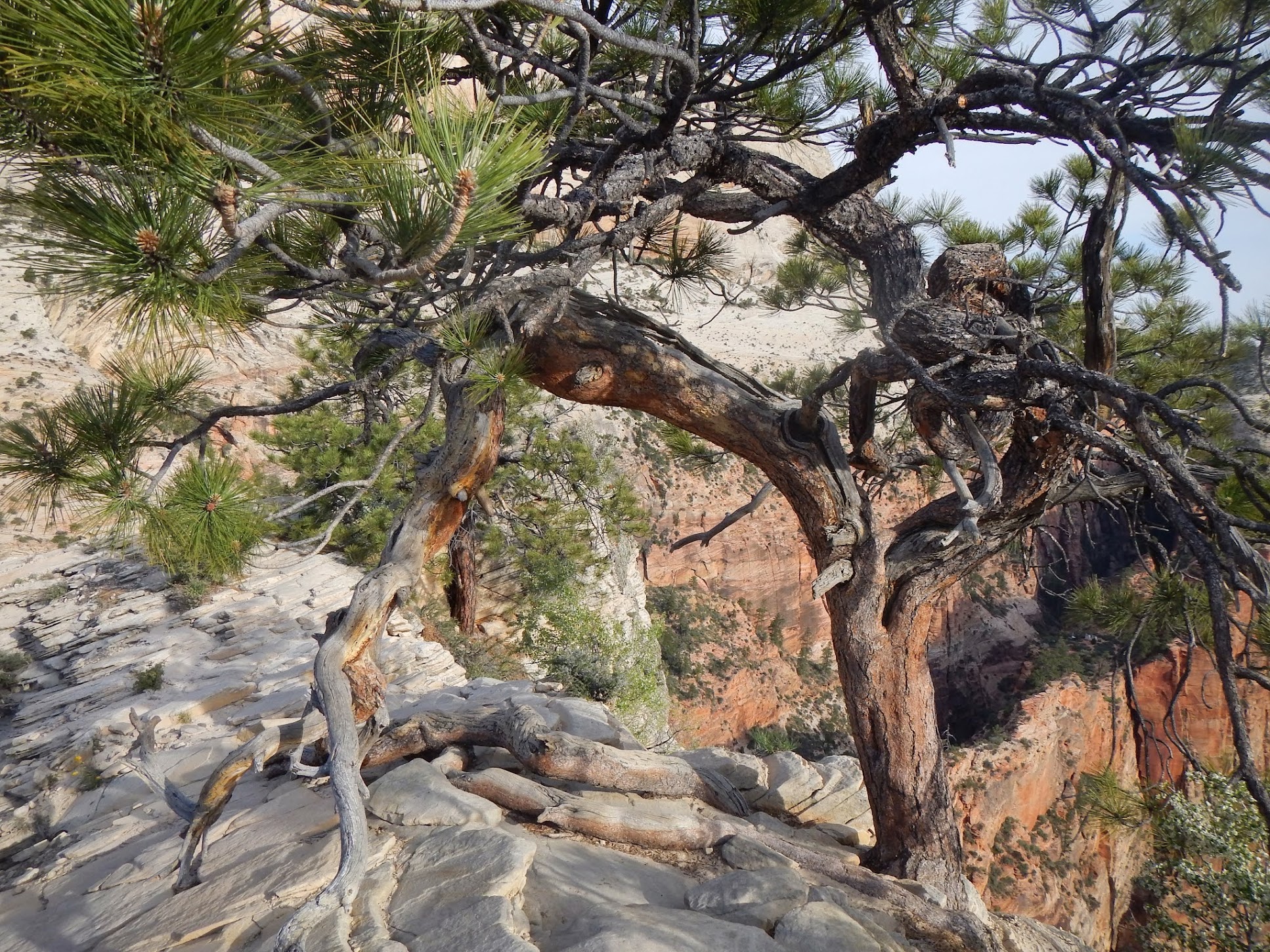 Before long we found ourselves on the upper trail. We passed one pair of visitors taking photos under a tree and walked out onto the end of the point for our summit snack break. We had the place to ourselves for quite a while, then an older Canadian gentleman joined us. It was a great perch to look down the canyon and feel the spaciousness of it all. But, not wanting to encounter the crowds, we packed up and headed out before most people had even stepped out of their RV’s.

On the way down we passed many more people, all with the same question: “how much further?”

My favorite sight was the guy with the Coors Light t-shirt on. Or was it Budweiser? Either way, a man outside his comfort zone. 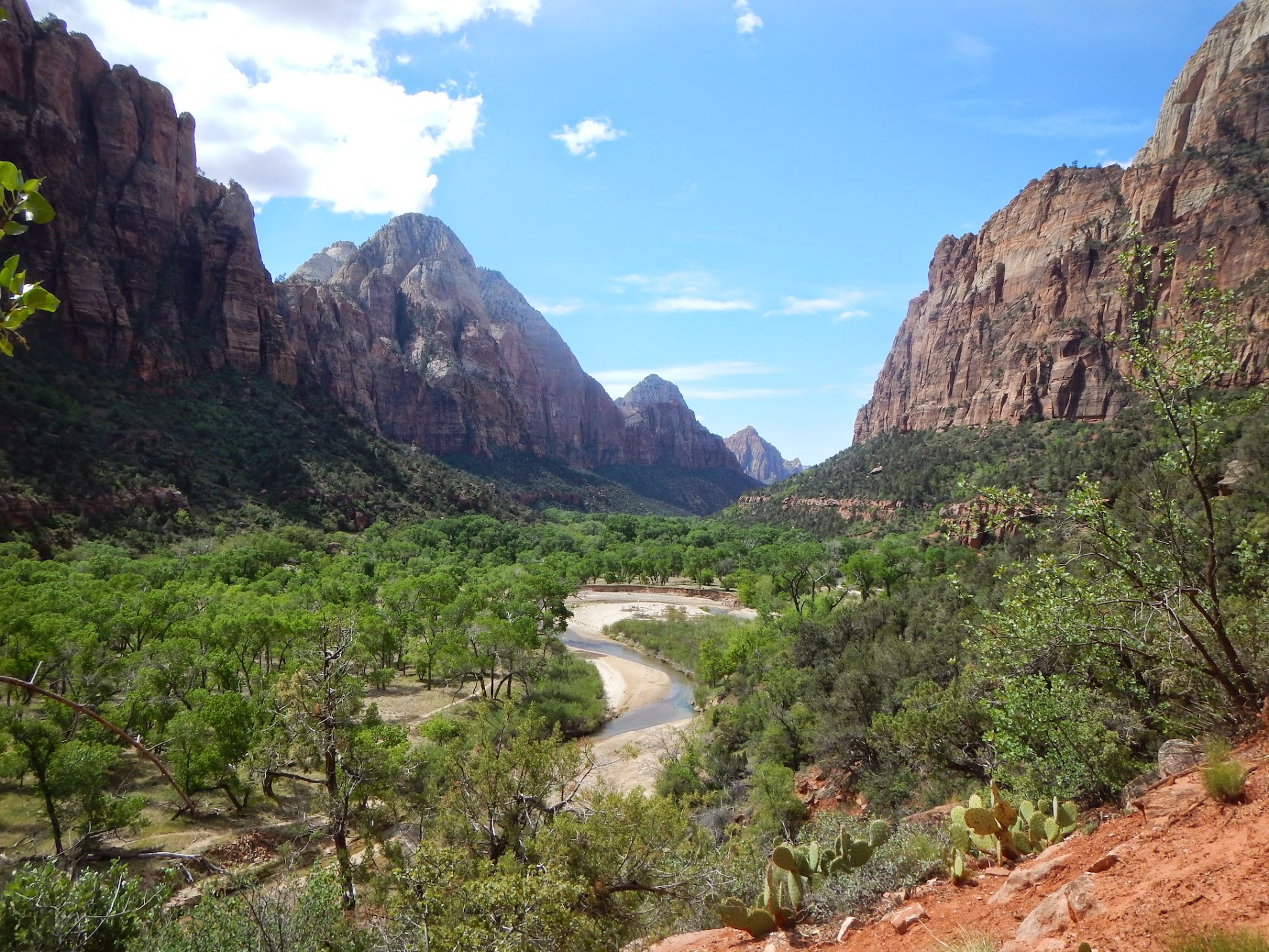 While the trail was a bit disappointing, the scenery was not. I was glad to stop and take photos while people were passing on their way up. I was in awe of the size of the throng of tourists shuffling up the trail. We set our sights on the Grotto picnic area, where we’d take a break, re-pack, and hit the trail again. It wasn’t even 10 am yet. We had the whole day ahead.

It was time for a chill barefoot hike. The Emerald Pools Loop looked like the perfect opportunity. My feet felt alive on the cool, soft sand. We walked slowly and quietly along the river, encountering a handful of groups along the trail. Once we got closer to the pools, the energy level heightened. We heard an enormous group of screaming children somewhere ahead. People of all ages, shapes and sizes made their way to the scenic pools. Water in the desert is always a main attraction. While there was ample, clear signage to stay out of the pools, several people disregarded the signs. There was even a woman smoking at the upper pool. Aah, the joys of visiting National Parks. 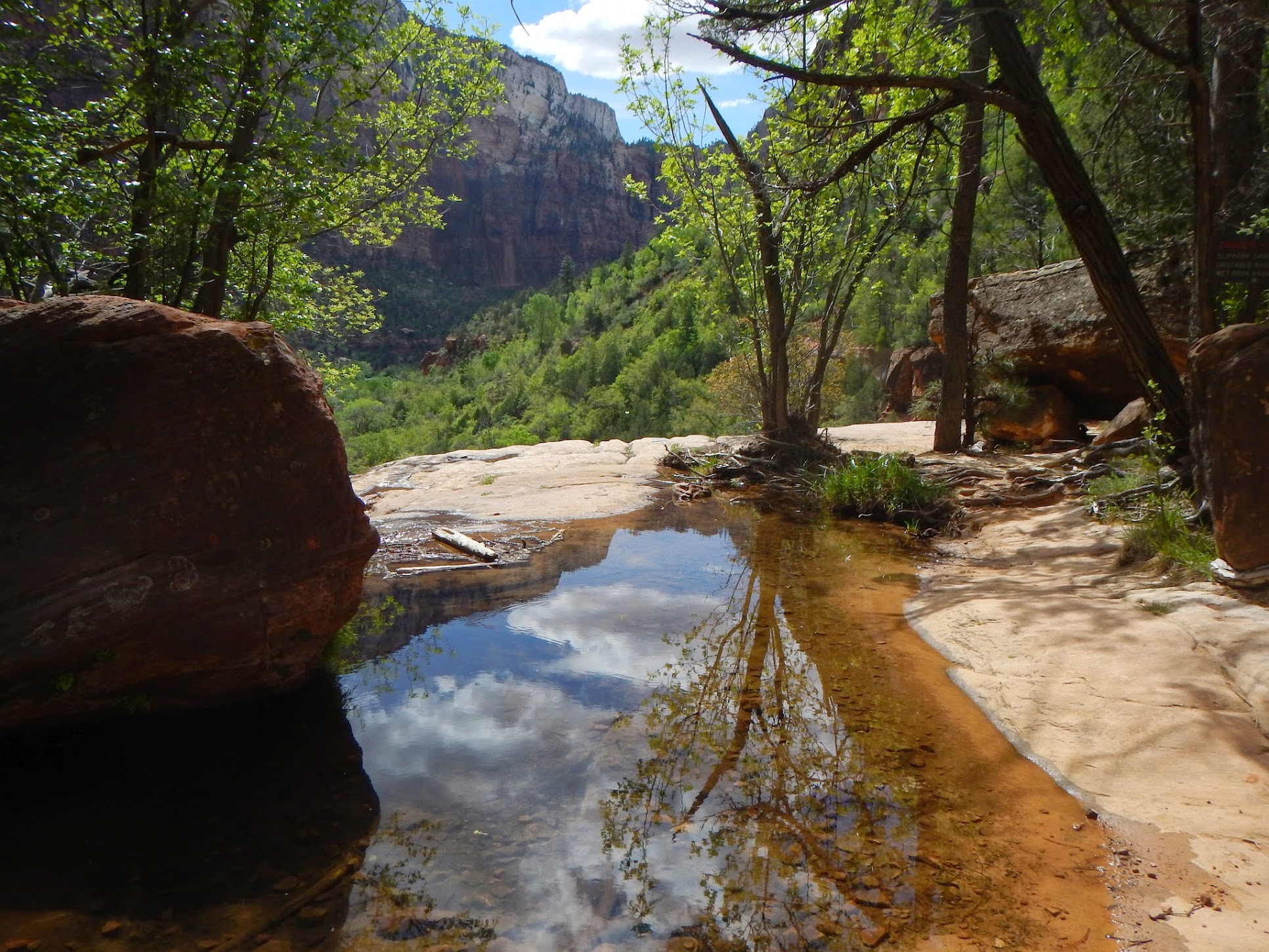 Continuing along our hike we came to the Lower Emerald Pool, which I thought was the prettiest and most underrated of them all. Delicate wildflowers and ferns clung to the moist rock walls and sand around the pools. We could hear frogs calling from somewhere nearby. The air was cool and refreshing, the views out into the canyon beautiful.

We continued on to the Lodge, where we stopped for a rest and some ice cream. Then it was a pleasant stroll through lush green foliage back to the Grotto, where we picked up the shuttle for a ride back to camp.

Afternoons in Zion are crazy hot, even in April, so we sprawled out under the cottonwood tree in our campsite and spent a few hours recovering. After dinner, we packed back up for an evening hike up the Watchman Trail. This convenient trail head was located just outside our campground so we rolled out of camp and started up the trail. 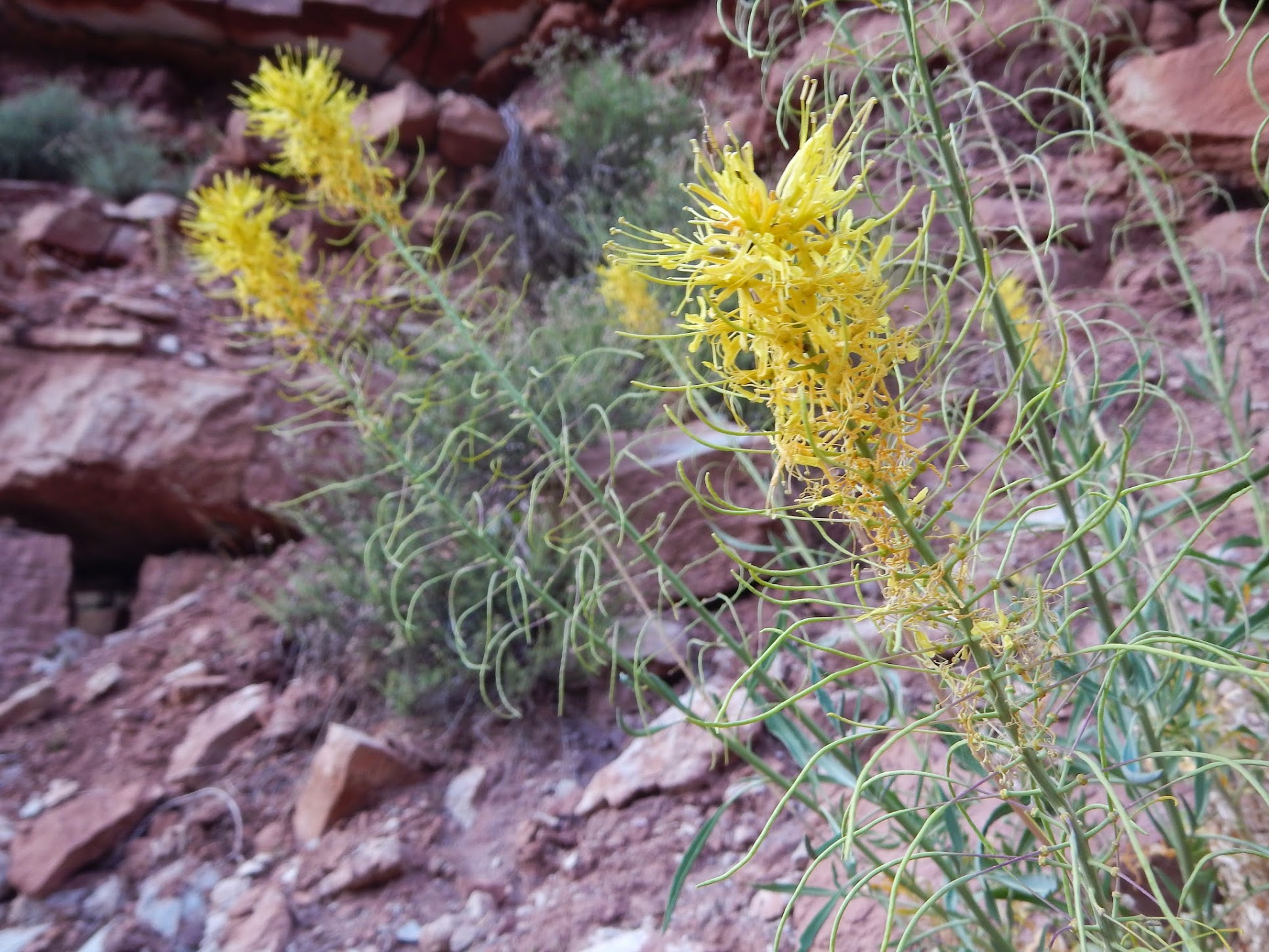 The best part of this hike was the profusion of wildflowers growing along the trail. I wished I had a flower guide with me to help identify these flowers. Later I discovered that we saw beavertail cactus, Eaton’s penstemon, Utah daisy and Thomson’s peteria, among other things. It felt like I was walking through a landscape painting.

We stopped at the lookout point for sunset, where I got a phone call from my buddy, Rick. Weather was coming in, he said, and we were pushing the climb ahead a day. That meant tomorrow. We hiked out of there, rolled back into camp by headlamp, and started re-packing for the morning. 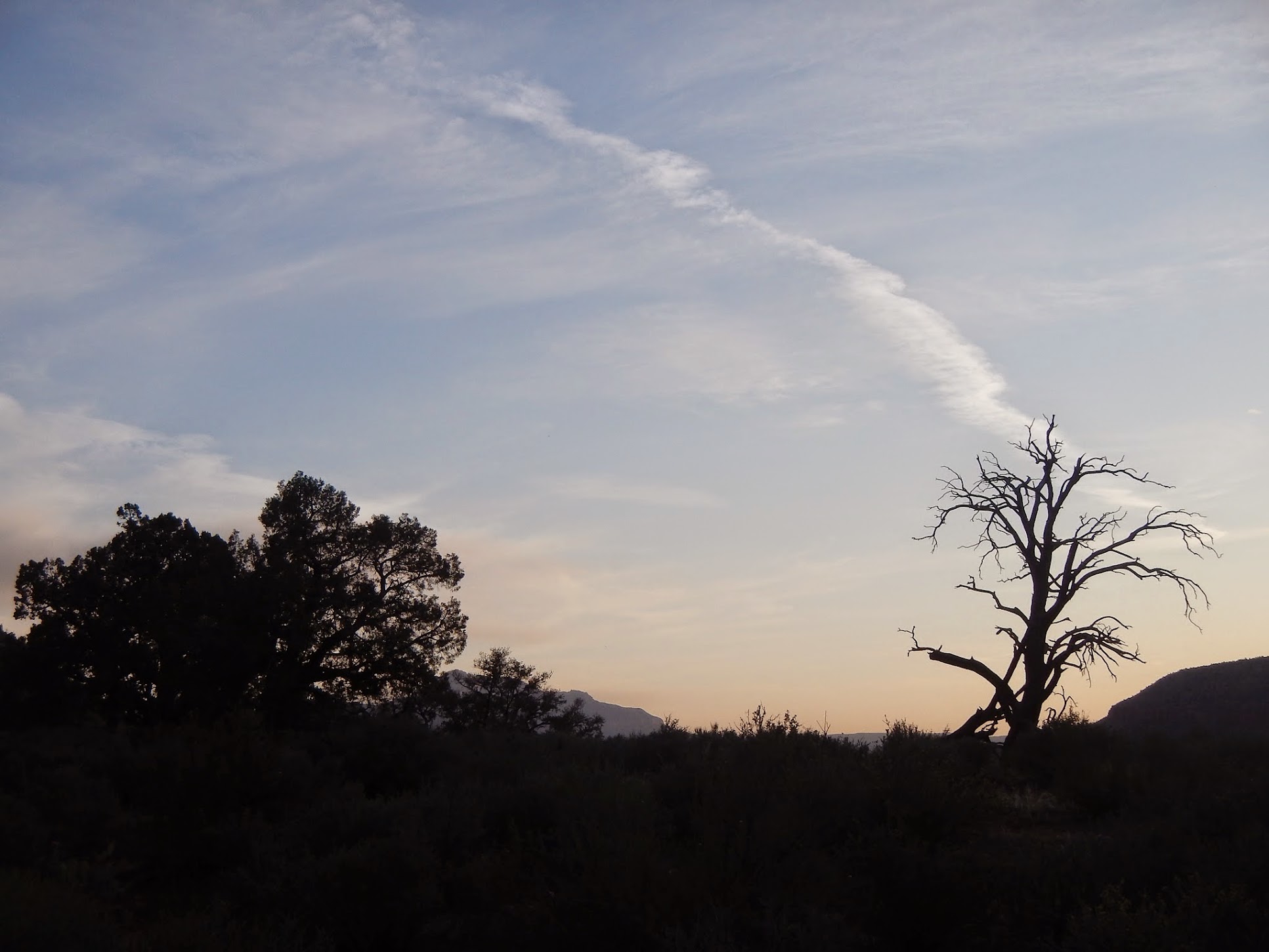