View the photo album from this leg of the trip. 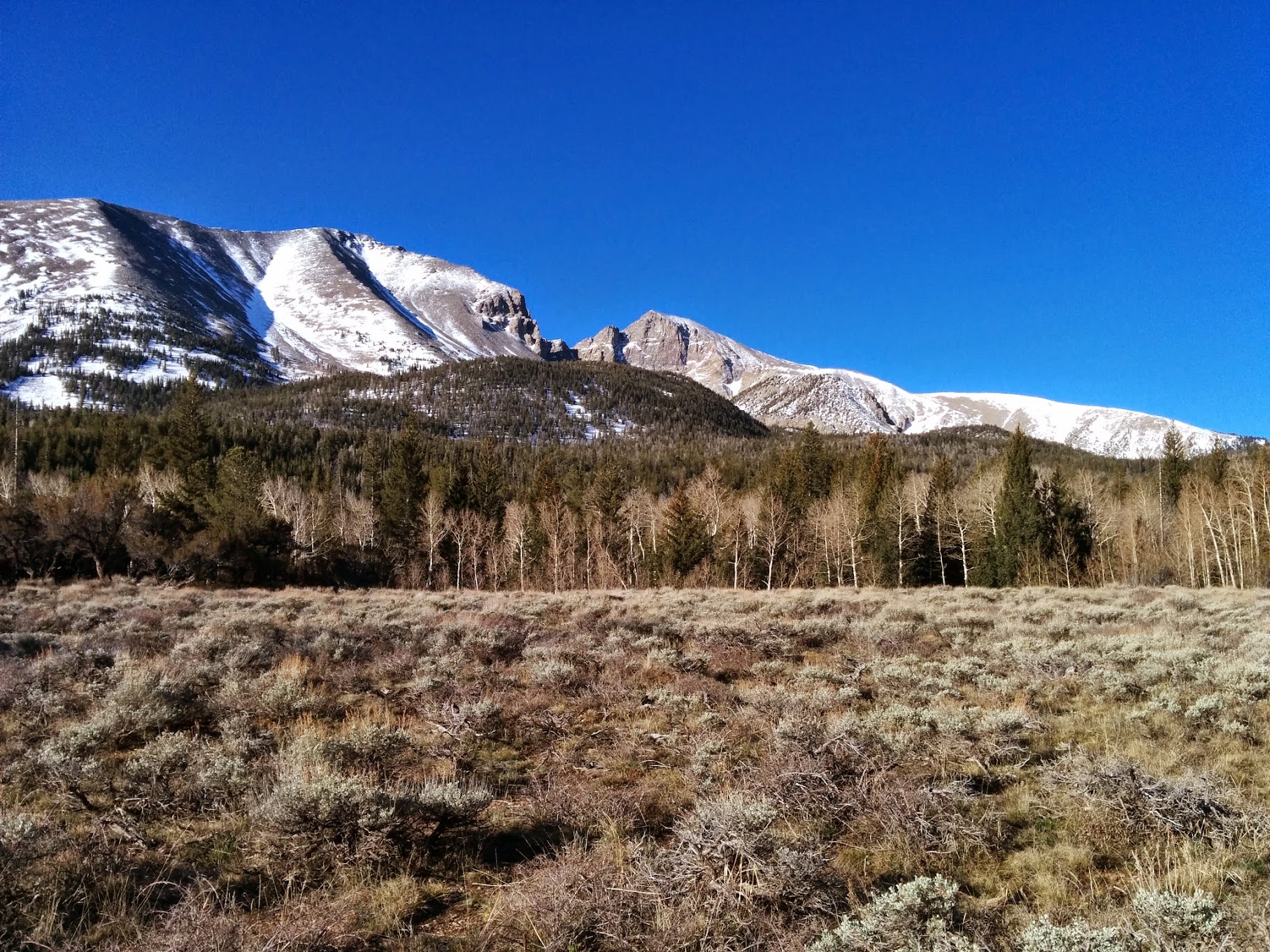 Spring arrived, so was time for another big adventure. The decision on where to go was made easy when I was invited to climb a pair of peaks in Zion National Park in late April. In order to make the most of my travel time, I crafted a road trip that would last nearly 3 weeks and take us through 4 states. Fortunately, my partner was up for it and the two of us set out from the mid-Willamette Valley in Oregon to explore some new territory.

After spending a night in Northern Nevada, we got up early to make our way to Great Basin National Park. Driving down highway 50, or the “Loneliest Road in America,” we took a lunch, car maintenance and tourist break in the town of Eureka. I wandered into the Eureka museum, which chronicled the rise and fall of a mining boom-town. There were rooms full of old printing machines, newspapers, kitchen items, and relics of old stores, homes and businesses. There was little information to accompany all these items so it was kind of like walking into a crowded antiques store. Nonetheless, it provided a nice diversion and the woman working there was very helpful in providing information about the town and the area.

As we approached the park from the west, Wheeler Peak came into view. That would be our target for our first and most challenging hike of the trip. 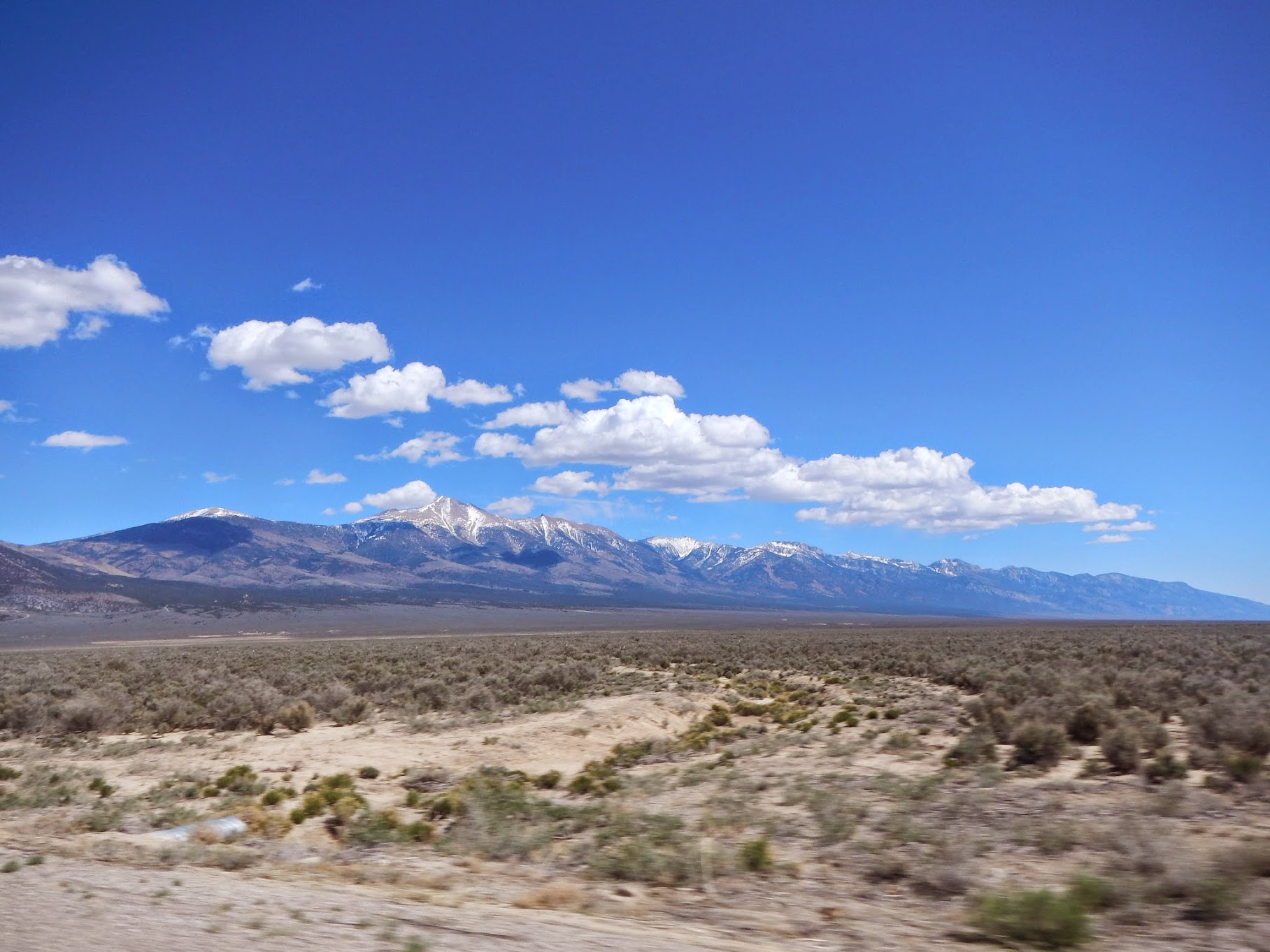 We made a quick stop at the Visitor Center to ask about current conditions and one of the rangers suggested an alternative route, involving climbing a couloir, that might be easier and more straightforward given the time of year. I thanked him for the suggestion and we settled into camp at Upper Lehman Creek.

In the summer, Wheeler Peak is a challenging but accessible high peak. The trailhead starts at 10,000 feet so there’s less than 3,000′ of vertical climbing to get there. A nice path leads 4.3 miles one way to the summit.

But now the road to the trailhead was gated due to snow. We’d have to start our hike from the Upper Lehman Creek campground at 7,750′. That nearly doubled the mileage and elevation gain. No worries, we were ready for this.

Living at sea level doesn’t quite prepare you for being at elevation for any period of time so we woke up early in the morning feeling short of breath just walking around camp. We packed up and hit the trail before 6:30 am, with only one group signed in ahead of us. 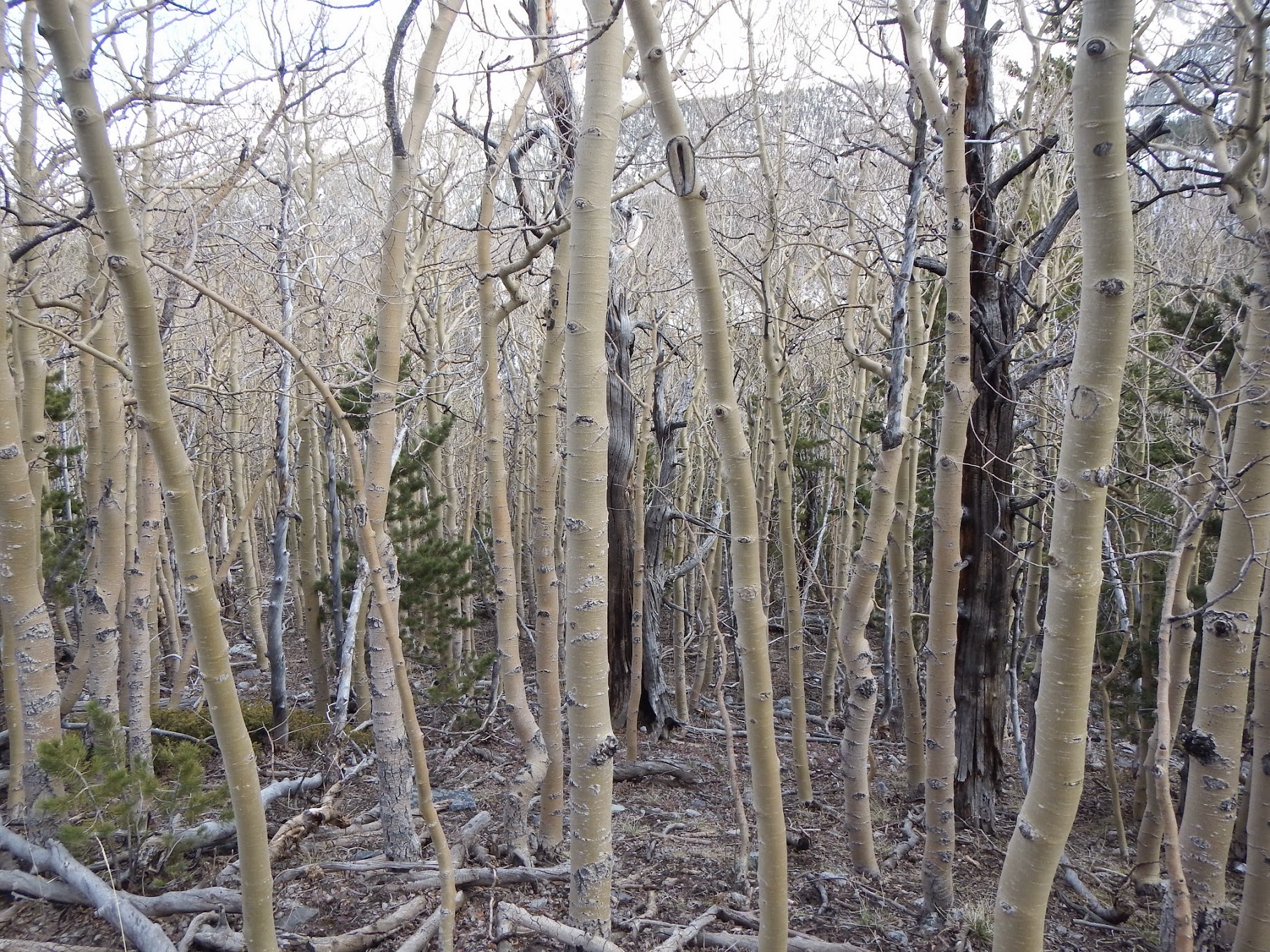 We walked along the steadily rising trail through stands of cactus, aspen, sage and juniper. About an hour into our trek we looked across a meadow to get our first view of Wheeler Peak. The bump we’d been staring at from our campsite was not, in fact, our mountain but some insignificant neighbor. The view was stunning. We’d see the mountain several times from many more angles through the course of the day.

After crossing the creek, we began to encounter patchy snow. Two hours into the hike we reached the Wheeler Peak Campground. Picnic tables and grills stuck out of the tops of snowdrifts. We followed the road, as the ranger had suggested, about a mile up the road to find the Wheeler Peak trail. Signs at the trailhead  warned us of the challenges that lay ahead and suggested some easier alternatives.

We followed the trail to a junction to Stella Lake. From here, according to the ranger, we’d find a couloir that would take us straight to the ridge below the summit. It would be easier than trying to find the main trail under snow. Besides, it sounded like more of an adventure. 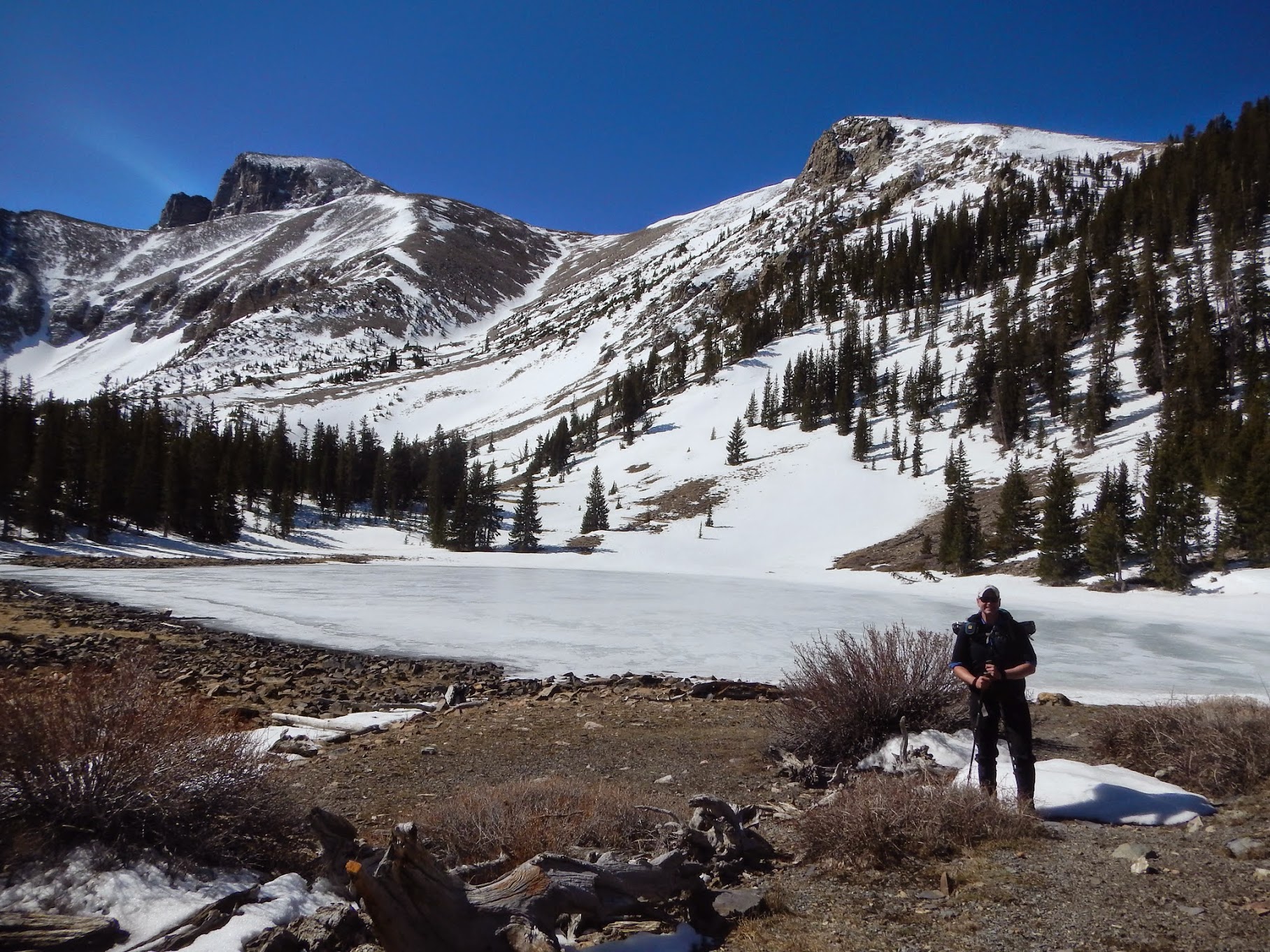 The couloir was an obvious ribbon of snow to the left of the lake. We circled around the southwest side of the lake and then headed cross-country over the hard-packed snow to the base of the couloir. I was surprised to see so many trees here, clinging to life at over 10,000′.

The snow texture provided enough grip in most places to allow us to climb up without any gear. Yaktrax would have been helpful in some of the icier spots, but I found that if I moved quickly and stepped firmly enough it was possible to get past the worst of it without slipping. Poles were essential.

Once we reached the ridge we were both a little disheartened to look ahead and see how much further we still had to go. The combination of being at a high elevation and climbing was knocking the wind and energy right out of us. We took a few extended snack and water breaks to keep moving forward.

Along the ridge, the views were stunning. There were snow-capped mountain ranges in every direction. Wind farms were visible in the valley bottom. The sheer rock face of Jeff Davis Peak became more dramatic with each step forward. And the weather was so pleasant! Sunshine, dry skies, and moderate temperatures helped us keep taking steps forward. Once on the summit, we really took a rest. It was time for lunch and some backpack-free exploration. There was a summit register placed inside a mailbox that someone left in a windbreak. We watched flocks of small birds swooping above the snow in search of food. And we celebrated the success of our efforts: a panoramic view that very few park visitors have seen, especially off season. Click the link below to get an idea.

Of course we were only halfway done and it was already 2:30 pm so we needed to start moving down. Aided by gravity we quickly ambled down the ridge and were back atop the couloir in no time at all. Going down was much faster and much more fun than going up. By the time we reached the snow above the lake the sun had softened it up considerably, so it was an agonizing slog to get back to the trail.

Knees wobbly from the cumulative effort of the day, it felt good to be on packed, dry ground and we made good time back to camp, arriving in time for a reasonable dinner. While I cooked many elaborate meals on this trip I had very little energy on this night. We settled for hotdogs and beans, a classic camp meal.

Before leaving for our trip I booked a Lehman Cave tour for 1 pm for the next day. I knew we’d be beat after our climb and could use an opportunity to sleep in. We did just that, had a delicious campfire brunch, and packed up our camp. We arrived at the Visitor Center just before the tour and layered up for our descent into the cold, damp cave. 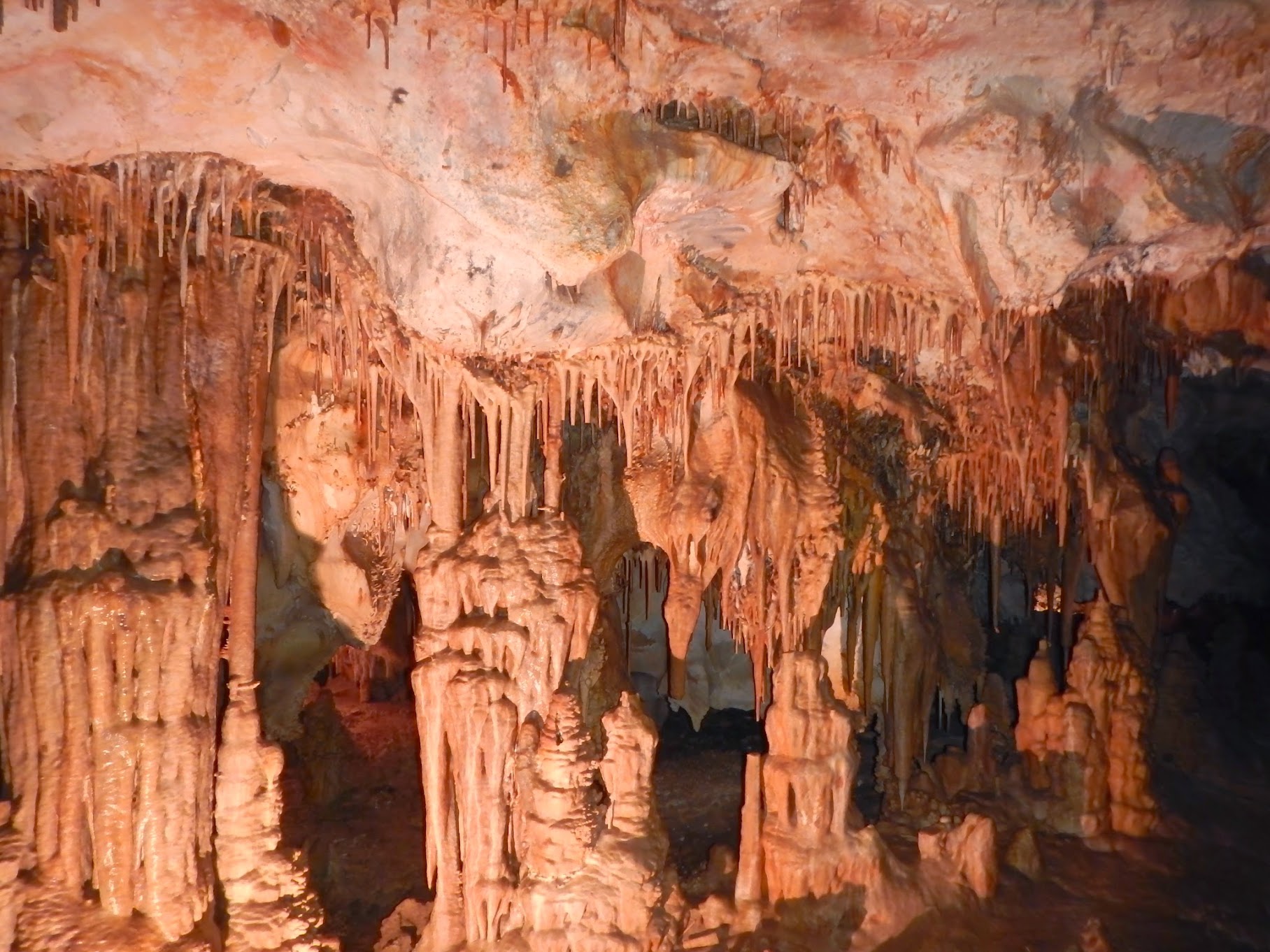 Unlike many of the caves in the Northwest, which are nearly all lava tubes, Lehman Cave is made of limestone. Our tour guide took us into several rooms of the cave. In the first room, she discussed how crazy it must have been for the first visitors to this space. She turned off all the lights. It was completely dark. Then she proceeded to tell us about experiments that demonstrate how quickly people go insane when they’re held in complete darkness. I could believe it.

Each room had interesting features, including some that were apparently pretty rare to find. There were the usual stalactites and stalagmites, plus several that had welded together into columns. There was cave popcorn and soda straws. What was most impressive to me was how many intricate features there were in every room. The cave was well-lit so we could appreciate the formations in the cave. Early visitors must have had a harder time appreciating it by candlelight. 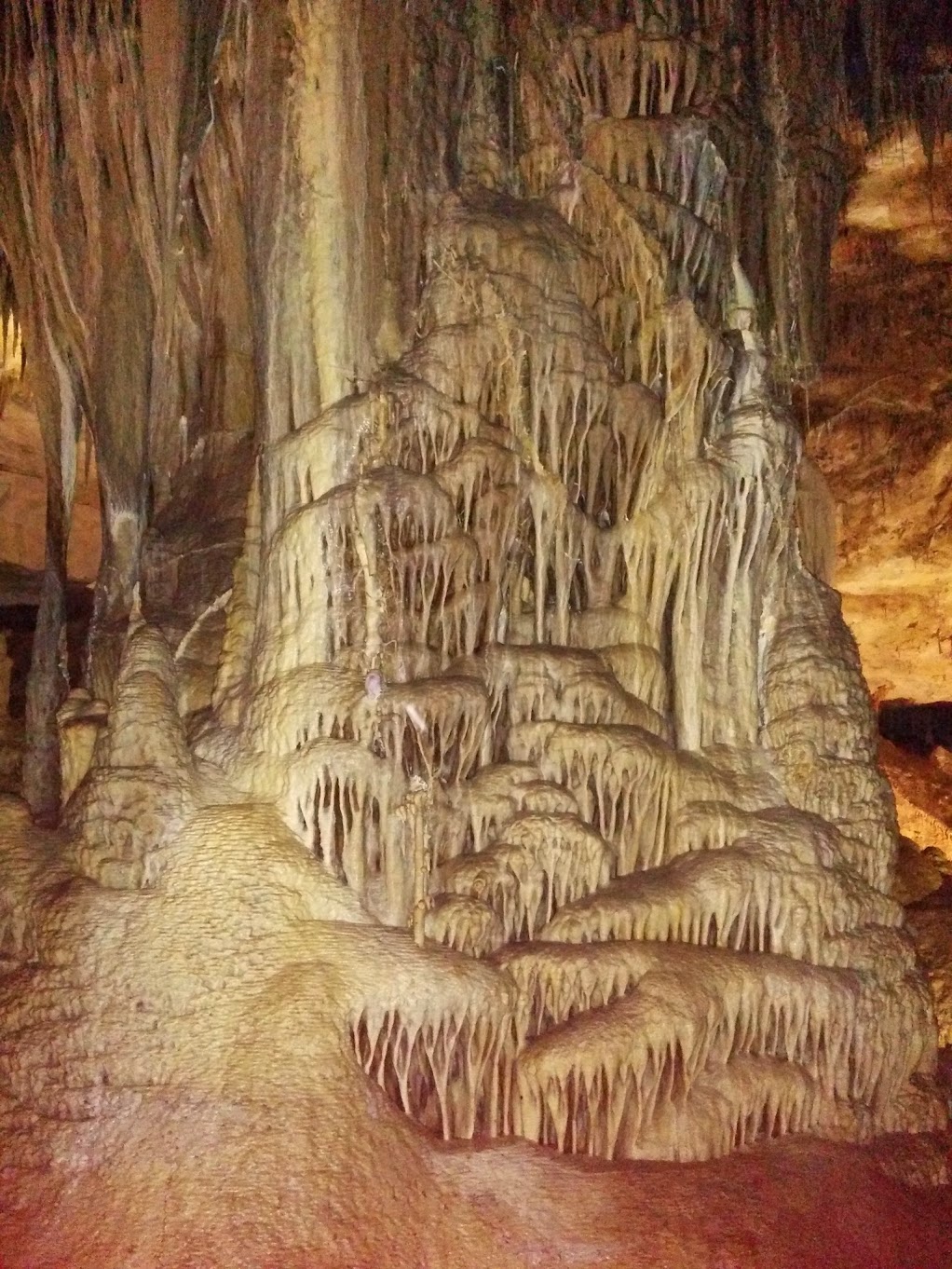 After the cave tour we ran to the small cafe attached to the Visitor’s Center to satisfy my milkshake craving, then hit the road. We had to book it to Zion National Park.