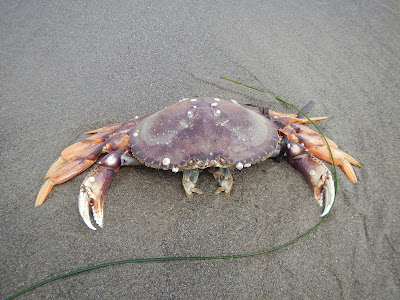 It began, as they often do, as an innocuous hike. I had an afternoon to kill and energy to burn. The sun was shining; it was a beautiful day on the Oregon Coast.

I’d read that Netarts spit juts nearly 5 miles out along the ocean, harboring a quiet bay on its muddy eastern flank. The ocean-side was a perfectly flat, sandy expanse, with forceful waves lapping the shoreline. I figured that a 10 mile beach hike would be an interesting change of pace for my feet and legs. I attached a pair of Crocs to my pack and set out, barefoot, on the sandy beach.

The hike begins in Cape Lookout State Park. With nearly 200 campsites and a “campground full” sign up at the entrance, I knew I’d encounter other humans today. Fortunately, the massive pack of belly-bearing beachgoers petered out after about 10 minutes of walking. I must have looked pretty ridiculous carrying a backpack (complete with water bladder hose sticking out) wearing actual clothes, strutting down the beach at a fast pace. No worries, I thought, I was ready for anything. First aid kit, warm clothes, rain shell, snacks, and a book to read were all nestled into my pack.

Walking barefoot on the sand was refreshing and enjoyable, but brutal. I developed blisters soon into my adventure, which would plague me the whole day. It was no big deal, though, the sun was shining, there were interesting dead things all over the beach, and I’d lost sight of all human presence. I was pretty happy. 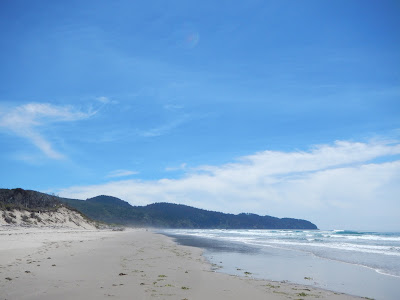 Two hours after I started walking, as I approached the end of the spit, people appeared in my sightline. What the? Surely these surfer dudes did not lug their boards and beach chairs 5 miles down the beach to catch these mediocre waves. My smile turned into a frown as I rounded the corner and saw people boating in from the other side of the bay. Cheaters.

I sat at the tip of Netarts Spit, where I dug into my snack bag, read about a half a chapter of my book, and zonked out for a sun-induced nap. An hour later, I rubbed the sand out of my eyes and put my Crocs on for the return trip.

Here’s where my internal dialogue got me into trouble: “Not wise to make a loop of it, Sullivan? Too muddy on the bay side? Ha! I’ll make a loop out of this silly beach walk, just watch me.” 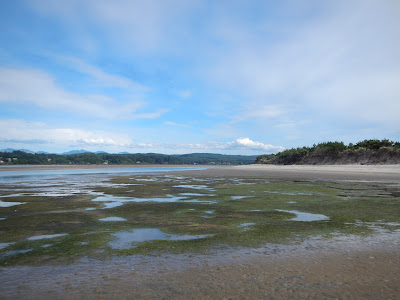 I walked directly south, through the grassy sand dunes, then cut left towards the shore of Netarts Bay. This side was much different. The low tide exposed expansive mudflats, pockmarked with holes from burrowing sand creatures. Broken scallop shells lay strewn across the ground. It was really pretty over here. I walked along the mud until it got really deep and squishy. Then, I veered towards a nice, grassy field.

The field, of course, turned out to be more of a wetland that was exquisitely disguised. As I proceeded, a nearly invisible network of twisted water channels arose beneath my feet. Some were shallow, water-filled gutters that were almost wholly covered in thick vegetation. Soon, they became waist-deep, mud-bottomed dugouts that looked far more precarious. Since the grass was tall and bent over easily, these ankle-breakers were not easy to see until I was right on top of them. I walked more slowly and cautiously, feeling quite alone out here. 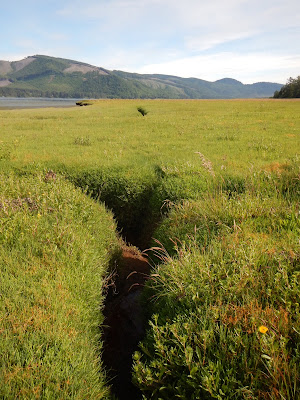 I looked towards the ocean, which was barricaded by a wall of coastal forest. I looked towards the bay across the grass, which led to endless mudflats of unknown density and shoe-suckingness. Not liking either scenario, I walked straight for a little while longer.

Meanwhile I scoped out my opportunities for crossing back over to the beach through the forest. It was thick. I knew the spit wasn’t all that wide, so I could tolerate a little thrashing to make it back to the simple ease of walking on the beach. I angled towards the forest. 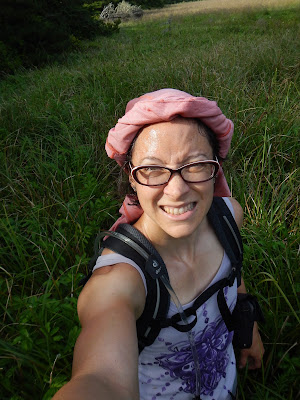 The chest-deep grass led to a giant wall of salal, And, I really mean giant. I started bulldozing my way through the impenetrable understory, regretting that I chose a sleeveless shirt and shorts for my mellow beach walk. There was no “path of least resistance.” I could go over, under, or through. Usually, over and under were not viable options. I thrashed my way along and the forest thrashed back. I was fortunate to have encountered very little blackberry or other thorny plants. However, the sticks and needles that gauged my skin felt hardly better. Every time I paused to reassess my progress, mosquitoes alighted on my skin to remind me to keep moving. “Argh! I hate you, salal!” 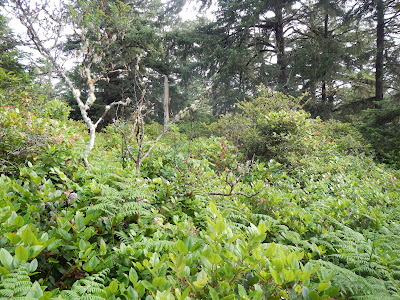 Nearly 45 minutes passed like this, and then I caught a break in the trees. Oh, I thought, I’m back at the beach!

I stepped out of the woods and began traipsing through a tall, wild grassland. As I scampered towards the water I thought, wait a minute. Where’s the beach? And if that’s the ocean, I shouldn’t be able to see across to the other side…

Against my better judgment, I neglected to get my compass out throughout this whole ordeal. Somehow I’d managed to trace some sort of arc through the trees, ending up back on the bay side of the spit. I looked at the time: 6:15 pm. I had people waiting for me in Neskowin, and the clouds were rolling in, and I had no idea how the hell I was going to get out of there. 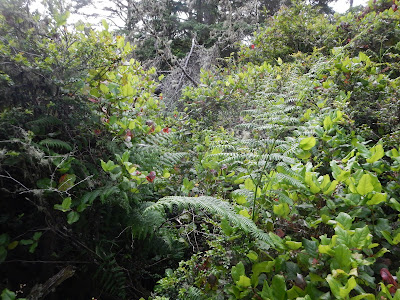 I thrust myself back into the trees. The pain of the branches cutting into fresh wounds hurt even more the second time around. I looked at my compass, took a heading and walked straight, regardless of what lay ahead. I listened for the sound of the ocean, and using these two cues, tried to correct the mistakes I’d made previously. I learned to make peace with the salal: I grabbed branches by the armful and pushed them down enough to get a foot up, then I walked on top of the salal until I could find a fallen log or other stable-enough surface to continue on. It was here I encountered the spikiest evergreen trees I’d ever seen: Sitka spruce? It felt like needles on my skin. I had to take off my shirt-hat and wrap up my hand before trying to grab these godawful branches.

It was slow-going, for sure. But I just kept listening to the crashing waves, thinking that soon enough I’d be on the soft, cool sand once again. About a half an hour after my forest re-entry, I stepped foot on the sand and brushed some of the debris off my body. I made a quick phone call to let people know I was on my way, then walked up the beach barefoot. My blisters were screaming. If I had to walk all the way back like this, it would take forever. 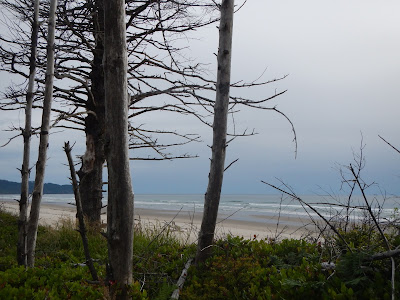 Solution: start jogging. I never jog. I hate jogging. I’m a walker, that’s what I do. But in this case, jogging was just the right thing to alter my gait, stress different parts of my feet, and get me to the car faster. It was perfect. Another 30 minutes and I was weaving my way through the campground to get back to the parking lot.

What an adventure. Had I heeded the warnings and not made a loop attempt, I wouldn’t have learned nearly as much as I did. I also would have intact skin on my arms and legs right now. But, I do like a good challenge, and this hike delivered. I’ll fall short of recommending this return route to anyone, ever. But the beach walk is nice. And, even on a crowded, sunny Saturday afternoon, you can feel like you have miles of the Oregon coast all to yourself.