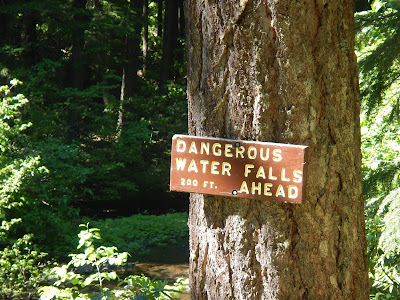 The forecast was for hot and sunny, with temperatures reaching the mid 90’s in the valley today. Aaron and I wanted to beat the heat with a hike to an alpine lake, but we didn’t want to hit up the usual tourist spots. What were the odds we could find solitude on this hot, gorgeous Sunday? I chose an unlikely destination: Vivian Lake from the Salt Creek Falls Day Use Area. 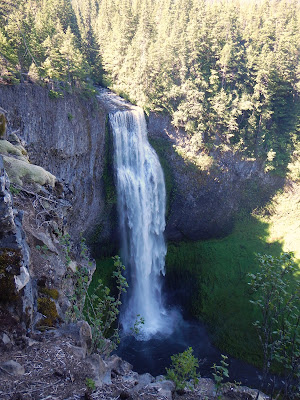 Since moving to Oregon, I’d traveled all over the state. But somehow I never got around to visiting Salt Creek Falls, the second tallest waterfall in the state. At 286′ tall, it created an impressive and awe-inspiring scene. Water poured over the steep cliffs and sent spray hurtling halfway up the rock walls. We followed the paved path to a couple of viewpoints at the height of the falls before venturing out to the Diamond Creek Falls trail. As soon as we entered the woods, the mosquitoes came out in a frenzy. I’d brought two kinds of bug stuff: the hippie-dippie, organic, essential oil blend and the 100% DEET. We slathered on the organic stuff to give it a test run.

This trail led us past Too Much Bear Lake, and then along Salt Creek’s upper canyon wall. From there, the trail paralleled pretty Diamond Creek. The mosquitoes, getting drunk on rosemary oil I think, were on the offensive. Hurriedly, we skipped down the trail spur leading to Diamond Creek Falls. The waterfall was tucked into a quiet little cul-de-sac that was green with thick vegetation. The blowing breeze and airborne water droplets kept the bugs at bay here. We took a little snack break and pulled out the DEET. It was inevitable. 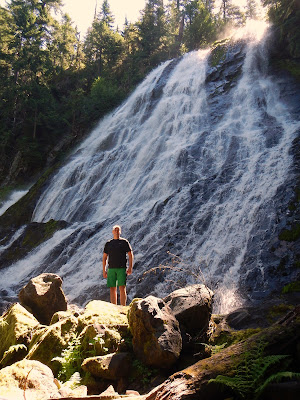 Shortly after regaining the main trail, we crossed the river on a concrete bridge and then came to some railroad tracks. Here I had to take out the book to assess where we were and where we needed to go. Up to this point, the trail was extremely well marked. We waited for an Amtrak train to pass, then crossed the tracks and picked up a gravel road. The road took us to a beautiful clearcut that was repopulated with rhododendrons. But, we’d gotten off track. A few minutes of bumbling around later, we located the trail and re-entered the woods. Now, the trail started climbing. I began to notice how hot the air felt. Slowly, we made our way up the trail to the next point of interest: Falls Creek Falls. A high viewpoint gave us a decent view, but we were sad to be so far from the actual water. I wished I could have doused my head in the cool, rushing stream.

Another mile of trudging brought us to our final destination: Vivian Lake. Remarkably, there wasn’t a soul to be found. We hiked along the left hand edge of the lake along a signed trail until we reached a campsite. We dropped our packs here and ate lunch.

Still, no one came walking up the trail. We stripped down and got in the water. The sun shone brightly and a soft breeze blew across the lake as we swam in the refreshingly cold water. It was idyllic, like a postcard. I shivered and thought about the poor saps back in Corvallis sitting chained to their air conditioners. 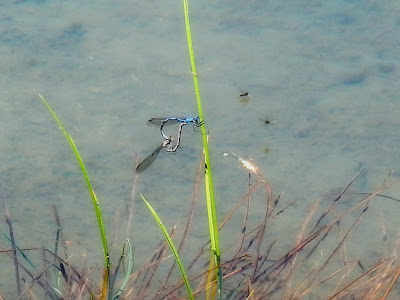 For nearly three hours, we swam, lounged, and explored around the lake.  We marveled at the swarms of black tadpoles and the frisky dragonflies. Before hitting the trail, I reapplied a layer of DEET to my skin and we said goodbye to this wonderful place. We searched in vain for the reflection of Mt. Yoran that Sullivan wrote about in the guidebook, but alas, there was none to be found. The rocky pinnacle of the mountain barely peeked above the treetops, and the angle was totally wrong to be seen in the lake.

The walk downhill was much more pleasant than the sweaty march up to the lake. We returned to the junction just beyond the train tracks and took a right to make a loop back to Salt Creek Falls. This part of the loop was high and dry, so we made quick work of it. As soon as we made it back to the paved trail near the parking lot, we saw people sitting at a picnic table. People! Where was everyone on the trail? I was totally amazed that we were able to have an entire lake and trail system to ourselves on such a warm day in such a popular area. Score!

So far this trip had been uncharacteristically pedestrian. I was itching for a little bit of adventure. We still hadn’t gotten down to the base of Salt Creek Falls and boy, did that pool of water look ever so inviting! 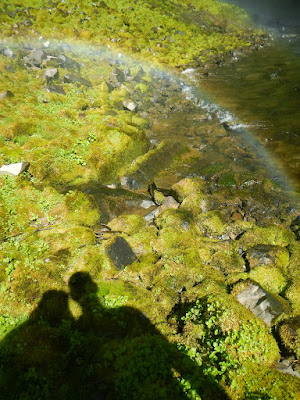 Beyond the high viewpoint, where the tourists were milling around, the trail continued to a series of switchbacks leading down the canyonside. The trail ended abruptly about halfway down the steep-sided wall. A rockslide had ripped out some of the wooden fencing, providing free and easy access all the way down to the stream beneath the falls. We carefully picked our way down the steep and slippery rockfall until we reached the mossy rocks at the bottom. The waterfall created a huge, swirling plume of wet spray that quickly soaked our clothing. Aaron packed his delicate camera/phone away while I was in charge of taking pictures and video with my beastly waterproof camera. It was actually cold down here. It felt like being in a Nor’Easter, but the sun was shining. And we weren’t in the Atlantic Ocean.

We found a nicer path, complete with switchbacks, that led back up to the rockslide and then to the trail. Sweet. It was a tremendous success, both in avoiding the crowds and in discovering solitude at a high elevation lake. And, as predicted, the “natural” insect repellent failed to perform. While I don’t particularly like bathing my skin in DEET, it’s the only thing that fends off the mosquitoes.