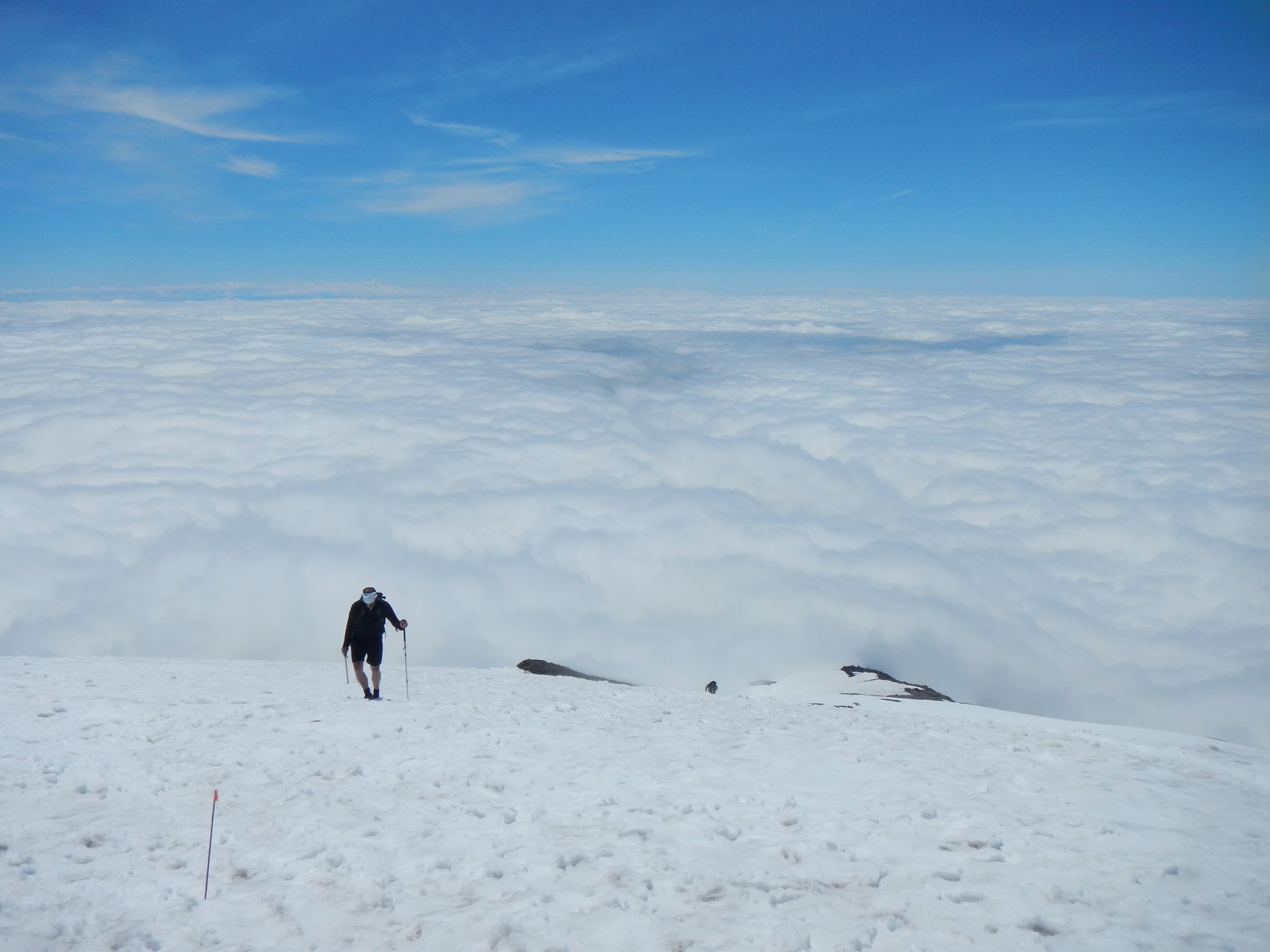 On a whim, I decided to join a group from portlandhikers.com who had a few spare permits to climb the mountain on this Friday. I’ve climbed St. Helens several times before, but always in the winter. See, I can’t be bothered with the process of acquiring a limited entry permit and *gasp* paying for one. I was happy to swoop in where some poor soul ducked out of the opportunity to climb this amazing volcano.

I met this motley crew at the Lone Fir Resort at 6 am, where we filled out the climber’s log and dutifully tied our permits to our backpacks. Shortly later, we reconvened at the trailhead and put the finishing touches on our packs and outfits for the day. Or so I thought. Turns out, the tennis shoes, shorts, and track suits that my new climbing partners were wearing were not “drive up” clothing, but the clothes for the hike. Oh boy, I thought, this was going to be an interesting day. 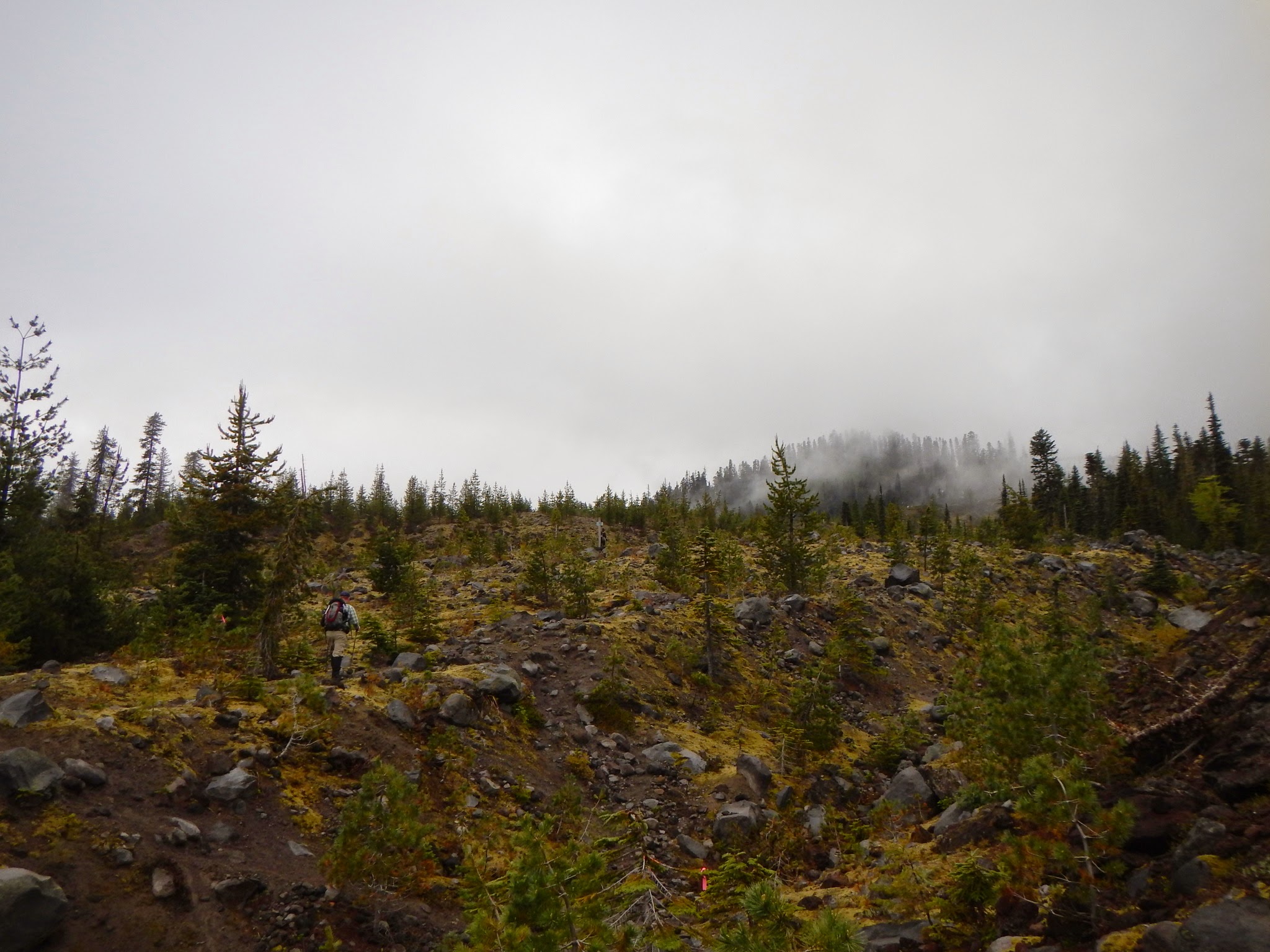 The hike to treeline was completely snow-free. This wasn’t a mountain that looked familiar to me. It was interesting to see all the greenery and flowers on what, in my mind, was an icy, windswept, white wasteland. Soon after emerging from the trees, we continued walking straight on a rough, rocky ridgeline that was dotted with trees. The well-packed trail became indistinguishable from the rest of the ridge, and I knew that we were off course. The hike organizer was out of eye- and ear-shot, so I jogged ahead to try and get his attention. “We need to go left,” I said, “although I’m not sure where the route is.” Everything looked surprisingly foreign to me. At least the ridge to our left looked like it had more solid footing, so we ventured that way.

Corralling the group into a tighter line, we veered west to try and regain the climbing route. We followed the ridge until it petered out, then fumbled our way roughly up and left, looking for the path of least resistance. By now we’d hiked into a thick, low-hanging cloud that reduced visibility at times to about 50 feet. Morale was low. Some of the team members were struggling with the snow and loose rock on our off-route adventure. With some coaching through these tricky sections, they performed wonderfully and group confidence and enjoyment (I think) began to improve. 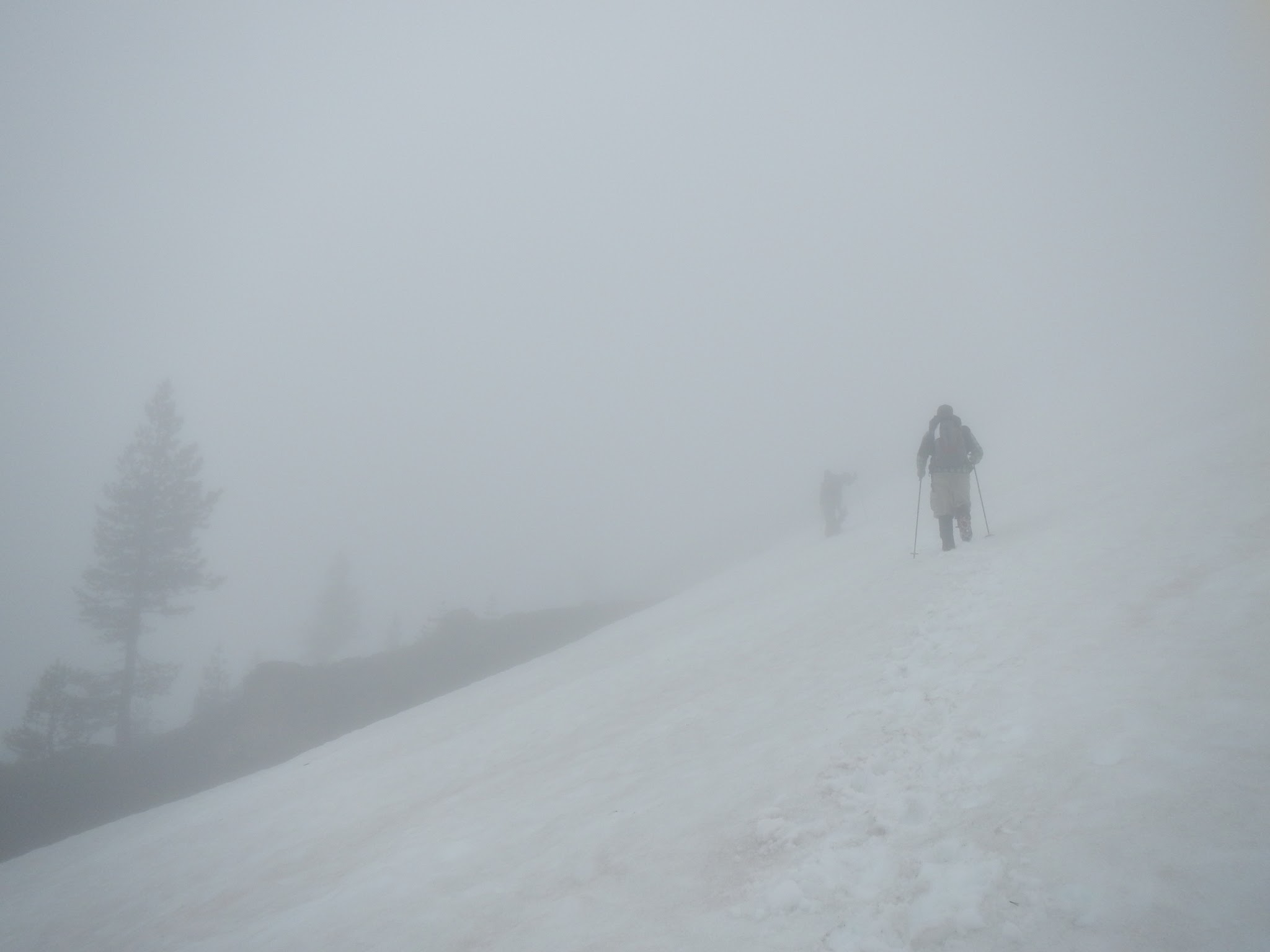 At last, we reached some long snowfields that made the traveling easier. The organizer passed out various traction devices to his friends, which helped them walk more easily through the snow. We kicked lots of bomber steps in the sloppy snow. I left my crampons in my pack, as my boots were performing nicely.

We slogged ahead for hours in a cloud, chit-chatting about miscellaneous things to keep people from feeling too lousy about what was supposed to be an easy and straightforward climb. It reminded me how much of mountaineering is pure drudgery, and to normal people, it kinda sucks.

“Don’t worry, we’ll climb above the clouds and you’ll see, it will be spectacular.” 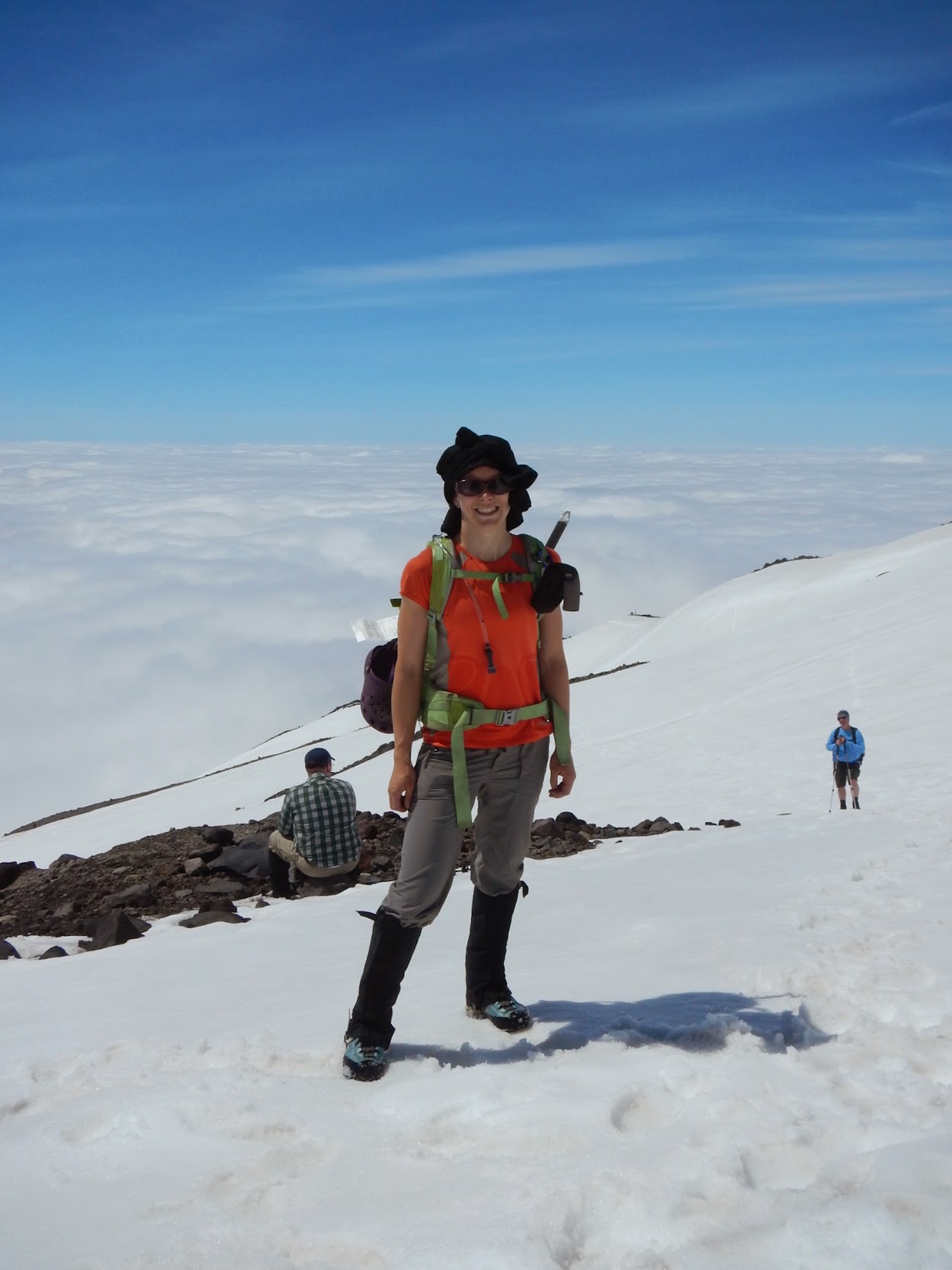 After some refueling and sunscreen-slathering, we continued along in the final summit push. We picked up a hop-on who joined our group, and we took turns kicking steps all the way up to the crater rim.

It was thrilling to stand at the edge of the crater and look at the world around me. It was extra exciting to share that moment with the rest of my team, who were totally troopers for enduring the day to that point. Everyone was feeling good, and the summit was well-deserved. 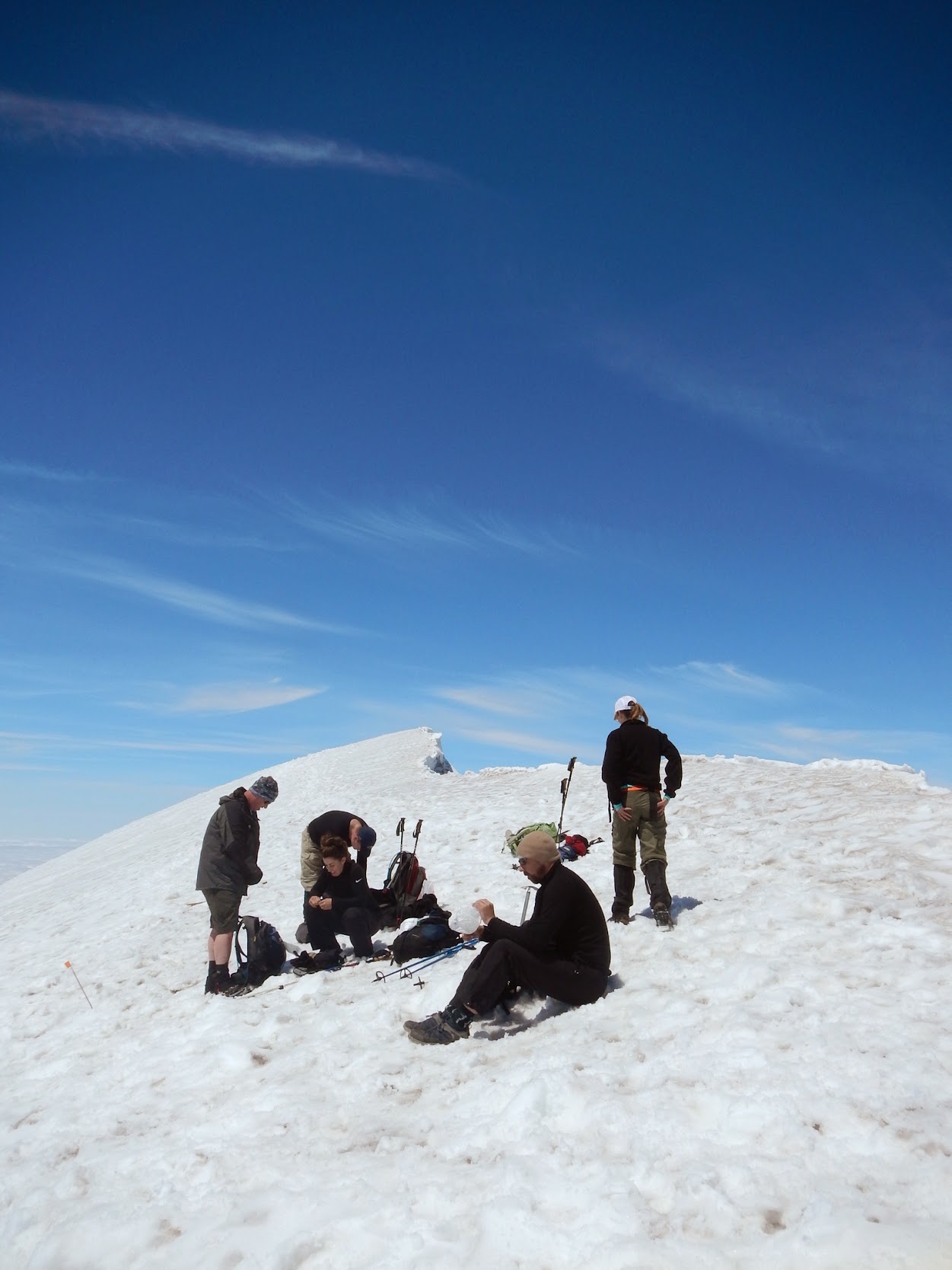 Time to go. So, how do we get back down? I was really surprised that we’d hardly seen anyone so far today. The sign-in book was filled with names of people who allegedly would climb the mountain, including some groups of 10-12. We didn’t see a thick line of bootprints leading the way back down the trail, either. We decided to begin following the flags and posts marking the summer trail, since it overlapped a bit with the winter trail near the summit. Whooping and hollering ensued as we walked, then glissaded, and glissaded some more. Everyone was having a great time. 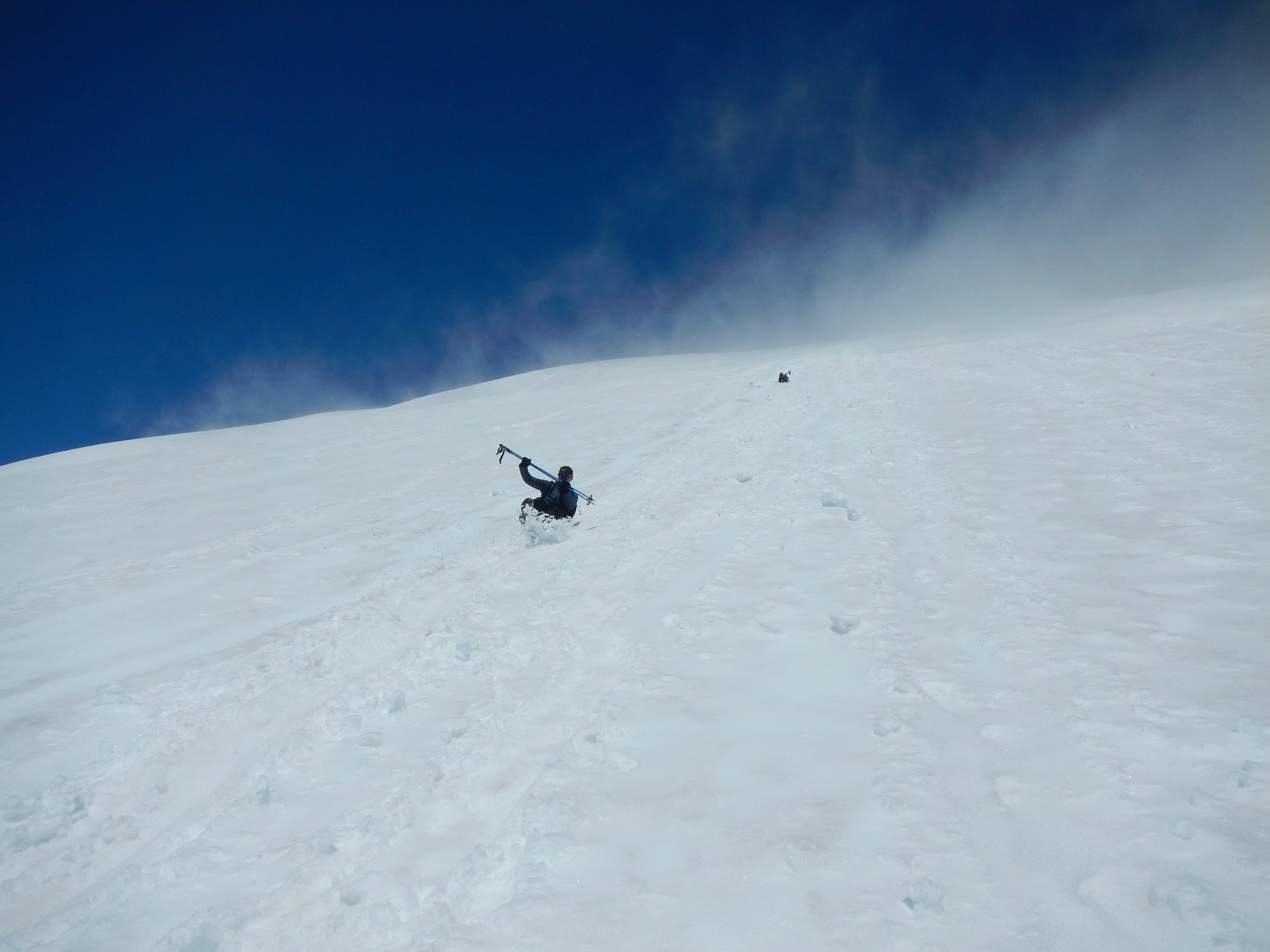 However, the excitement of glissading distracted us from keeping an eye out for our junction, and we ended up far from the winter route again. The trip leader was way out of earshot; I was worried that we’d end up at the wrong parking lot and have a lot of backtracking to do to return to our cars. Before veering to the right of a huge rock formation, I rallied the troops and we took a sharp left, following some snowfields and gullies as we approached treeline. From a distance, we could see a short stretch of trail following a short north-south ridge. We made that our goal.

But getting from point A to point B wasn’t so easy. First, we had to negotiate a fairly steep and loose wall of rock to drop down into a narrow basin. It wasn’t a huge deal for me, since I’ve done lots of dumber things before, but I was concerned about some of our team members. They took it slow, and everyone made it down in one piece. From there we scrambled up and over some blocky lava flows, crossed a brushy bump, and landed on our trail. Phew! Awesome. It was cake from there. We picked up the winter climbing trail just before the switchback we’d missed on the way up. Of course, it looked much more obvious on the way back. We ran into a group of climbers who’d been similarly confused earlier in the day. But they ended up bagging the climb as they got disoriented in the clouds. Bummer. They were busy placing some arrows marking the trail and blocking the herd path that deceptively led them (and us) astray.

Every climb is different. The mountains always present different conditions, challenges, and secrets. I’ll never get tired of taking opportunities to climb peaks I’ve climbed before.  Each time, another story: Feb 2012 | Feb 2011 | Jan 2006.