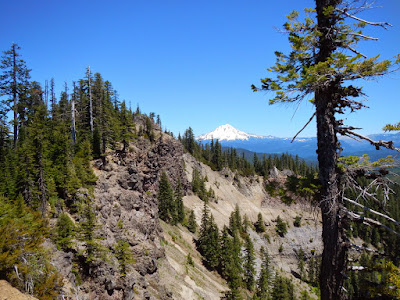 It was another beautiful, sunny weekend day in the Cascades. I had to think a little bit about finding a backdoor trail in Central Oregon that wouldn’t be overrun with people. I looked towards the Old Cascades Crest trail system to give me some peace and quiet. I had no idea how incredible this hike would end up turning out.

A few sentences in the back of the green book directed me to a hike of Trappers Butte and Scar Mountain. I had directions to the trailhead, a mileage to the summit of Scar Mountain, and nothing else.

The trail is accessed up a nice gravel road off of Route 22. I parked in a nice little parking area and crossed the road to the Scar Mountain Trail. Right from the get-go, the trail was overgrown. It was obvious that this trail received little attention. As long as I could find the route and not get bogged down by snow, I was in. 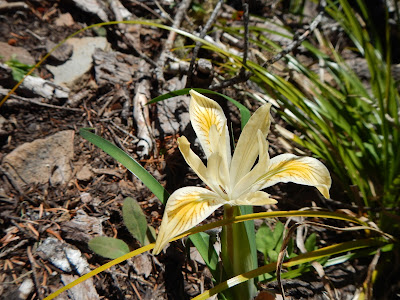 The trail passed through the woods, winding in different directions, and bobbing up and down pretty regularly. The net gain was obviously up, but there were several downhill sections that dropped into creekbeds and drainages. Occasional small snowpatches crept onto the trail surface, but they were easily crossed. The forest was pretty. Occasional breaks in the trees allowed sunshine to shower down onto the trail. Flowers, ferns and grasses poked up through the trail surface, sometimes making it difficult to discern what was trail and what was not. Rhododendrons, beargrass and bunchberry flowered all around me. It was incredibly quiet, save for the occasional tweeting bird. 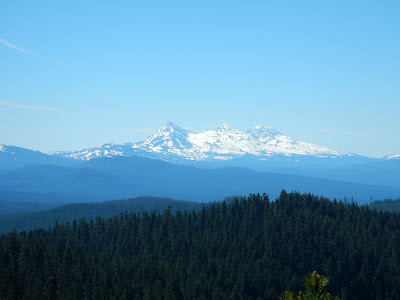 As the trail pressed upward more consistently, the trees gave way to an incredible view of the Three Sisters and Mt. Washington. I stopped here to take some photos, catch my breath and have a snack. The sky was so blue. Snow-covered volcanoes dotted the skyline. Where are the crowds? They must be hiking out to some lake, then sitting and fighting the mosquitoes there. No thanks.

Onward I went, unsure of how far I’d traveled and where my destination would be. I didn’t have a map of the area, and of course no GPS, so I kept checking the time and estimating my distance. The trail closely followed a serpentine ridge, usually staying just below the ridgecrest in the cover of trees. At some point, I topped out on Trappers Butte. There was no obvious marker or fanfare, so I just kept moving along. The trail had so many ups and downs that that particular “up” felt no different from all the others while I was moving in this direction.

Getting frustrated with my apparent lack of progress, I began to take some side ventures up to the ridge to get a feel for my surroundings. I peeked through every gap in the trees to formulate a mental image of the lay of the land, and to figure out just where Scar Mountain might be, and how I’d know if I was there. 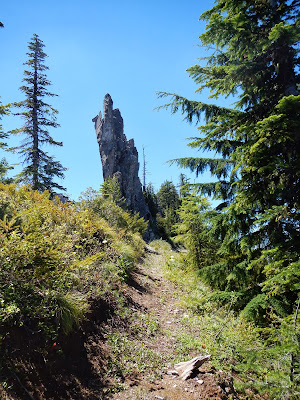 Shortly, I saw a dramatic rock face in the distance. I could barely make it out, but it looked like it could offer a “viewpoint cliff” that was mentioned in the guidebook. Sure enough, the trail curved around towards the rock face and popped out just below the obvious ridge. Towering rock sculptures were perched atop the ridge proper. I remembered seeing these in one of the few photos I could find online of this hike. Excited, I scrambled up the fractured rock to take a look around.

WHOA! A sheer vertical drop was just inches away from me, and I quickly tried to assess the integrity of the rock and vegetation I was grabbing on to in order to get up there. I returned to the trail briefly, trying to find the safest high point to make my turnaround point. I spotted a bare, rocky pile at the far end of the ridge that appeared to be summit-like, and it wasn’t insane to try to get up there. A few minutes later, I carefully sat atop the summit and pulled out my pasta salad lunch.

Words cannot describe the perfection of this place at this time. It was quiet and still, warm, scenic, and relaxing. Although I could see several forest roads that practically came right up the backside of this mountain, I couldn’t help feeling like I’d made a special discovery. Obviously, the path I’d taken hadn’t seen much foot traffic lately, and I could only find a handful of websites that mentioned this hike, and only three photos. The forest service page mentioned the trail name but it had no description or details. They had a generic map of the area, which was only minimally helpful. I feel conflicted about putting information about the trail online, but I’m sure one trip report won’t cause the general masses to go for a 13 mile hike full of ups and downs, since there’s no lake to swim in or summit log to sign.

The toughest part of the hike was making the decision to go back. It was so nice up here! If only I could share this incredible view of the rock face.

From my summit I spied a high point on the other end of the ridge that looked like it would provide an ample view back to where I was. Armed with the mission to get up there, I followed the ridgecrest along the base of the rocks and then straight through the dense evergreen hell-trees until I got there. At places I was hanging on to tree branches and stepping on who-knows-what beneath my feet. I was very aware of the precipitous drop on the cliffside, so I did my best to keep a buffer of vegetation between me and certain death. So dramatic. 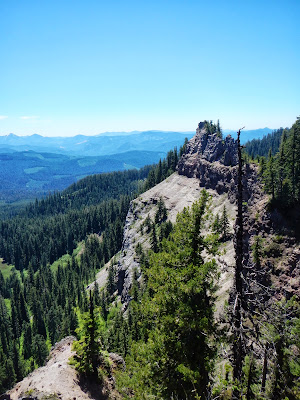 I was pleased to reach the far rock outcropping and found a little clearing from which I could brush the pine needles off of myself and take some pictures. Mission accomplished. 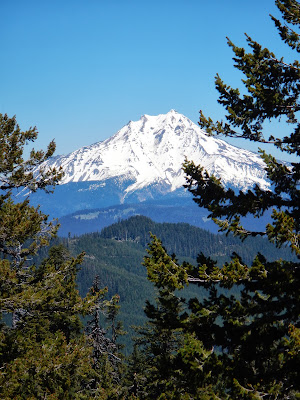 I knew the trail was just below me, somewhere, so I took the path of least resistance downhill as I continued along the ridge. There was no way I was going back the way I came. Eventually I crossed paths with the trail and continued along my merry way. I stopped here and there to take pictures. Every now and again I’d turn my head and BOOM! Mt. Jefferson was staring me in the face. This was a really, amazingly scenic hike.

I don’t know if I’ve just been really lucky lately, or if I’m really good at picking hikes. Maybe I just love being out there so much, it doesn’t really matter how the trail ends up turning out. I always enjoy my adventures in this part of Oregon, and I know I’ll be back again really soon.