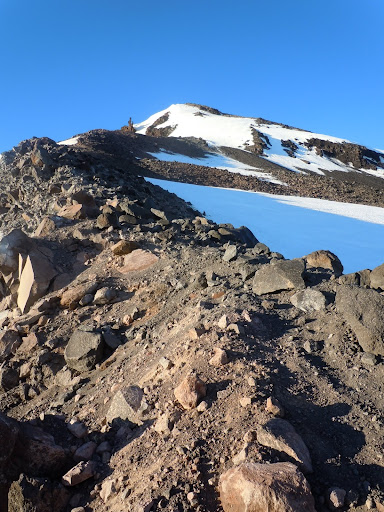 See all the photos on Google Photos.

Getting a casual start from Portland, our team of three arrived at the Pole Creek trailhead around 2:30pm on Thursday afternoon. It was hot, and dry, as central Oregon tends to be. It was cool, overcast and drizzly when we left our beloved hometown in the morning. After a few minutes of packing and pre-hydrating, we set out on the well-graded Pole Creek trail. 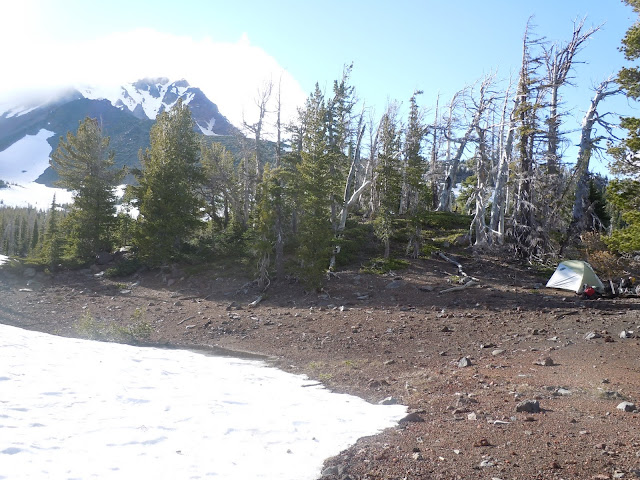 We walked rather uneventfully for about 4 miles, where we began to look for the alleged climber’s trail towards Middle Sister. At about the time we thought we had to leave the trail, the ground became covered in large patches of snow. We lost the trail and began to hear the sound of a rushing creek; we’d gone too far. At that point we headed west, cross country, hoping to breach treeline and catch a glimpse of our climbing route. After a bit of walking we realized we were creeping up the southeast arm of North Sister, so we rerouted our track to head towards the Hayden Glacier. Somewhere below the glacier, in one of many patches of dirt and trees, we made our camp. We had walked for just over 3 hours. The sun was warm here, but the wind was whipping across the snow, so it felt cold. We positioned our tent in a semi-protected area near a small pool of water melting off the snowfield. We fired up the stove, ate a warm dinner, and filtered water for the next day. It was an early bedtime, since we planned to wake up at 3:30 for an early start. 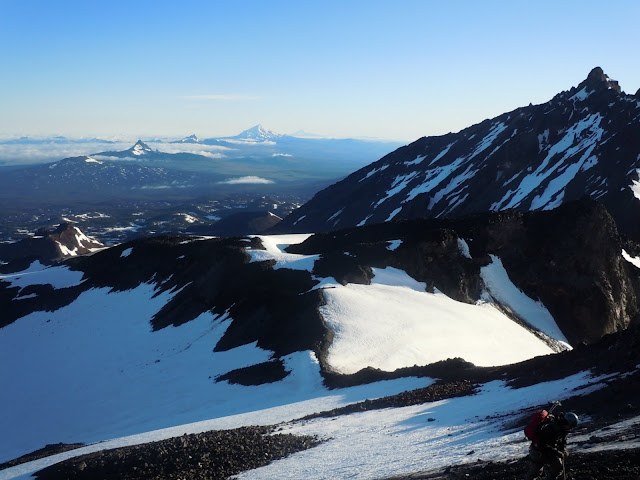 The next day, we started up the rock-hard snow just before 4:30 am, by headlamp. We followed the tracks that Jeff had made the previous evening while scouting out the route. We could see other headlamps shining above us; we were not the only ones with this idea today. One step after another, we ascended the mellow snow slope, interrupted by one small rock band, and caught up to the climbers in front of us. It was an older guy and a young guide; we wished them well and continued to the Hayden Glacier. There, we roped up and continued along. Walking on the high ground allowed us to evade the crevasses splitting open on either side of us. The glacier walk was mellow and monotonous. It led us to the base of the north ridge of Middle Sister, where we unroped, ditched the rope and pickets, and continued up the rocky slopes.

As we crested the ridge and walked up the snowfield on the west side, we were blasted with wind. I added a few layers of warmth and wind-block to maintain a comfortable temperature. As we ascended, we were rewarded with spectacular views of the entire Cascade Range: North Sister, Mt. Washington, Three Fingered Jack, Jefferson and Hood extended north of us. To the south, Middle Sister and South Sister loomed large, with Broken Top just off to the east. We alternated walking on crumbly rock and firm snow. The climb was relatively mellow, save for one short section of steeper snow that required a bit more care to cross safely. Once above that spot, it was smooth sailing all the way to the summit.

The wind continued to batter us here, and there was no shelter to be found. We sat on the one bare, rocky spot and had some snacks while enjoying the sun and the scenery. The mountains and ridges were painted white with sinuous brushstrokes of snow. We departed with most of our layers on, knowing that within a few hours we’d be battling the heat on our walk off the mountain. 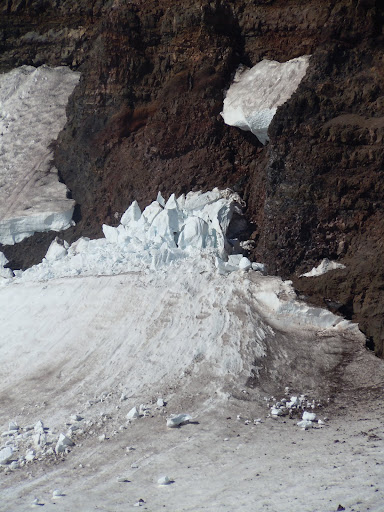 I was slightly concerned that descending the steep snow would be trickier than coming up but it was actually easier with the steps already made to follow. We were back to the base of the ridge in no time, where we roped up again and walked back towards camp. We passed the impressive-looking Prouty Pinnacle to our left, which had dropped some hefty rocks onto the snow in days past. We ogled the icefalls, rock formations, and crevasses along the Hayden Glacier and east face of Middle Sister to our right. And we looked up at the summit of North Sister, so close, and yet so agonizingly far away. I enjoyed the casual descent in the comforting sun. Eventually we unattached ourselves from rope and crampons and skidded down the sun-softened snow. We returned to camp less than 6 hours since we left it. With the heat of the sun now reaching our camp, we dried out our wet gear while re-fueling and packing up our stuff.

The walk out from camp to the Chambers Lakes trail was not incredibly straightforward. We were able to follow someone else’s tracks for a while, but we lost them once the snow turned to dry land. We navigated by compass in the general direction we needed to go, while keeping track of our approximate altitude and distance so we would be looking out for the trail. We complained for a short time about not being able to find it, which is precisely when we stumbled across some faded pink flagging and a log cut indicating a trail. Satisfied that we could now walk without thinking, we plodded along at a steady rate all the way to the trailhead. On our way back we passed by a solo hiker, a large group of Mazamas, and a couple with two horses and a dog.

I’m glad that I finally ticked Middle Sister off my to-do list. It was a fairly straightforward and mellow climb, with a huge bang-for-your-buck factor. It was a nice introduction to the Cascades for Brody, who is hopefully now bitten by the climbing bug. I’m now even more excited for my next climbs.