All photos are here. 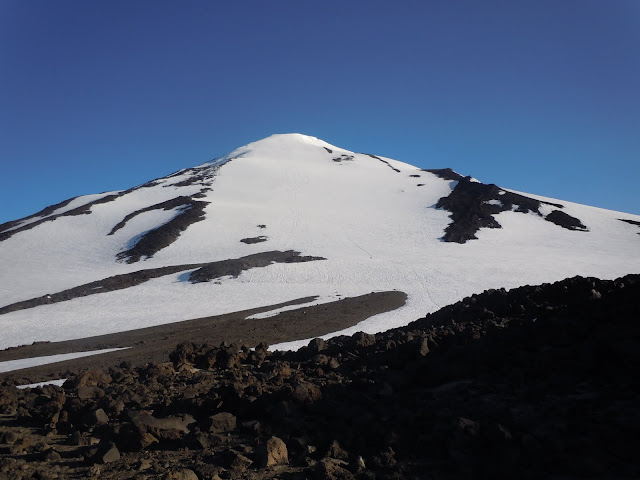 After a foiled attempt at Adams several years ago with some friends, I finally got my chance to return to the mountain. Except this time, there would be no heavy overnight pack–I planned on getting up and down in a day. Fortunately, another person indicated similar plans so we joined together on a gorgeous July day to do just this.

Nat and I departed from Portland the night before so we could camp at the trailhead and get an early start. After a couple of rude awakenings from obnoxious snowboarders during my precious little sleeping time, we were off on the trail at about 4:45 am. Snow patches on the trail began almost immediately and within a mile or so we were pretty much completely on snow. An hour after we began walking we caught a nice glimpse of Adams in the early morning light. It was so far away! 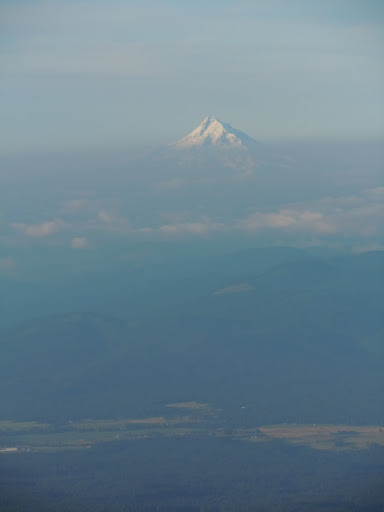 The trudge uphill was made slightly nicer by turning around to see Mt. Hood peeking through the clouds and St. Helens looming above the western flank of Adams. It was a very pretty area. We had been following a criss cross of boot tracks all morning, and caught up to the aforementioned snowboarding yahoos below the Lunch Counter resting among a rock pile. We walked among several other rockpiles before settling on our own resting spot to have a snack, rest, and reassemble layers.

Once atop the Lunch Counter proper, and within sight of the endless slog up the moderate snow slopes leading to the false summit, we put on crampons and began methodically pushing our way uphill. There were a few shallow glissade chutes breaking up the slope, as well as a variety of boot tracks. I tried to avoid both, making my own switchbacks uphill on the hard, crusty snow. Every now and again, I’d stop to look around and take in the view. It was the same view, over and over, for what felt like forever… 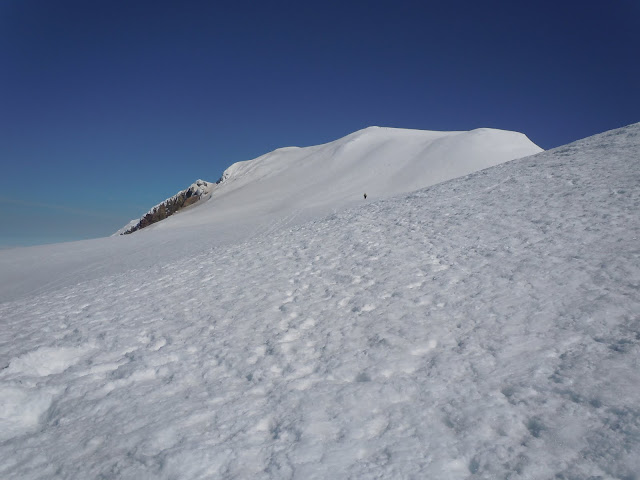 I was happy to crest the top of the false summit, if only for a second, because it was here that the wind picked up ferociously. I quickly added multiple layers, including my giant puffy, and questioned the sanity of the man walking towards me in shorts. The view from here was spectacular, and one I’d never seen before. A wide, snow-covered plateau lay ahead of me, with a gently rolling slope at the other end that led to the true summit. I still had quite a bit of walking to do. But, walking on flat and slightly decending terrain was a welcome change of pace. It wasn’t long before I crossed the plateau and began the last steady, uphill slog.

There were several groups on and around the summit. As I sat on top, snacking on treats and hugging my limbs into my down jacket, I looked back at where we’d come from. There was no sign of the solo guy who was behind us, nor of the group of snowboarders we’d leapfrogged on our way up. The sun was shining, and views reached from Mt. Rainier to Mt. Hood. The building that allegedly stands on the summit was nowhere to be found, covered by a hefty snowpack.

A short glissade took us down the first hill leading from the summit to the flat expanse connecting us to the sub-summit. At the edge of the lip leading down to the 2000′ drop to the Lunch Counter, I waited in the burly wind for Nat. I had to put my down puffy back on to cut the cold. Sure didn’t feel like the end of July! Once he arrived, we prepared for the real glissade. I had a pair of old snowpants on, my jacket tucked into my pants, and my gaiters secured tightly around my legs. It was go time. I sat in one of the established chutes and eased myself down. Soon, gravity took control and I was tearing down the hillside, giddy like a child at a waterpark. It was outrageous fun. There were banked turns breaking up the long straightaways. Snow blasted up into the air as my body and axe dug into the sides of the chute. I had to self-arrest three times to get my out-of-control self back to a manageable speed. I was laughing so hard on the inside I occasionally let out a yelp of excitement. Within just a few short minutes I got up off the snow and looked back up at my starting place, over 2000 vertical feet away. Now THAT’s how you get down a mountain.

We still had some miles to cover to get back to the car. We changed clothes again, had a quick snack, and made our way down the now slushy snowfields, following footsteps and the occasional wand, until we reached the trail. Once we hit terra firma I set my mind on cruise control and stopped for nothing until I got back to the trailhead. What a great day. The agonizing uphill haul was worth it for the sweet ride back down. 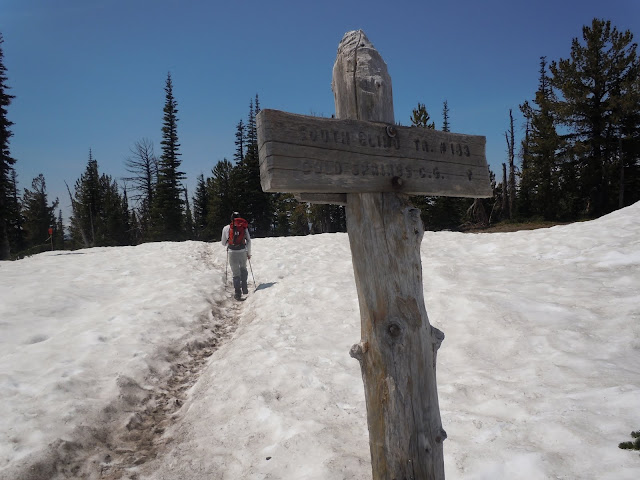 On a side note, we stopped at the only place in Trout Lake for food before driving back to Portland. I’m not sure if the food tasted so good because I was hungry, but I had an OUTRAGEOUSLY good BBQ burger that was so giant I couldn’t fit it in my huge mouth. I ate every last speck of it, too.