See all the photos from this hike. 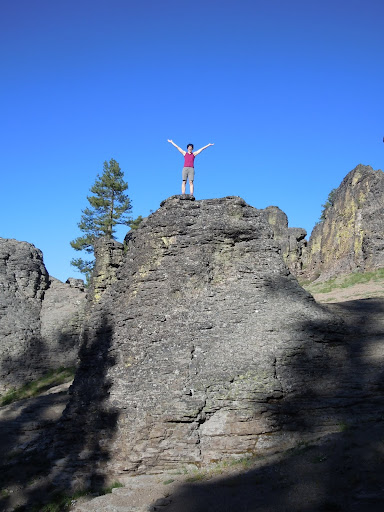 Sue and I got up early to take advantage of a cool morning start for a potentially long hike. At 12 miles, most of them on a trail, I hoped this would be a cakewalk, but I was concerned that we would run into snow somewhere along the route. Our hike began at the end of a (not so bad) gravel road in the Fremont National Forest. Soon, we left the forest and entered a very different landscape: The Palisades. Here, pine needles and rotting logs gave way to pebbly dust and large rock formations. Wildflowers grew in clumps around the mounds of dirt and rock. The rock was unusual; layers of weathered andesite made an almost step-like surface on the vertical piles and slabs. As we walked, the rocks became more grand.

But just a tenth of a mile later, or so, we left the rocks behind and re-entered the forest. The trail was pleasant to follow, although the scattered patches of snow were foreboding. We passed the occasional grassy meadow, and rock outcrop, giving the forest some variety and peaking my interest. It was an incredibly beautiful scene every step of the way. A month or so early for the true wildflower bloom, we still caught quite a number of flowers along our trek.

As the trail gradually gained elevation, the snow patches became more predominant and we eventually found ourselves walking on snow with patches of dirt. Water diverters were not present to keep water on the trail, so the trail became the best place for water to flow. In some spots, the underlying stream of water melted out the space on top of it, producing trail caves. We admired these fun little snow sculptures and continued on our way. 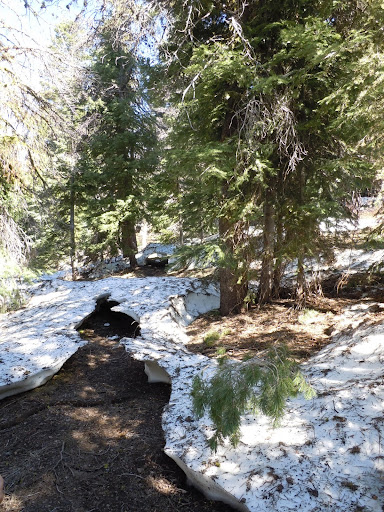 At about 4.5 miles in, we were supposed to reach a saddle, at which point the hike becomes a bushwhack up a ridge to the summit. Just before this point (I think) we completely lost the trail and we didn’t have a great view of our surroundings, either. Far to the right was an exposed, bouldery ridge, and to our left was a forested, snowy slope. We knew we had to go up, so we cut left and walked directly up the steep snow. After climbing up some boulders and gaining a ridge, I located a vantage point from which to assess our situation. It looked like our summit block was ahead of us, and although it appeared to be far away, I thought we might be able to get there before our turn around time. We still had to get back to camp, pick up Karen and drive all the way to Bend to accomplish our to-do list today.

We dropped back down off the high point and walked through snow and rock in the general direction of the summit. The many trees along the way made this more difficult because of all the melted-out tree wells surrounding them. We wove our way through the maze, trying to avoid as many ups and downs as possible. When we hit long stretches of dirt, we marked our way with cairns so we could find our footsteps on the way back. 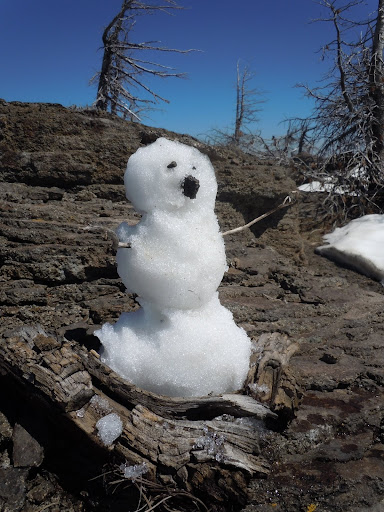 Walking was tedious. The sun grew hotter, and the snow got mushier. I dragged my feet along, falling into a rhythm. I doubted whether or not we would make it, but we kept on moving along. I remember looking up and seeing the same scene, over and over: trees and undulating waves of snow. But one time I looked up and saw the cliffs of the summit block, up close! I knew we would get there. I got a second wind and tore across the landscape, slipping and sliding on the unforgiving snow. I reached a dry, dusty rock slab and clambered up to step on yet another snow ramp. A large plateau of snow lay ahead, with a small dip leading to yet another snow plateau. Assuming we had reached the false summit, I waited here for Sue and then we both took off for the far end of the cliffs. The views from here were outstanding. We could see the large mass of Mt. Shasta to the south and a row of Cascade volcanoes leading north to the Three Sisters and beyond. The summit must be even more impressive when the snow is melted; we were confined to a small, dry outcrop bordered on one edge with a steep cliff and the other edge with deep snow. It was a pretty spot, and before I left I constructed a small snowman to commemorate our hike. 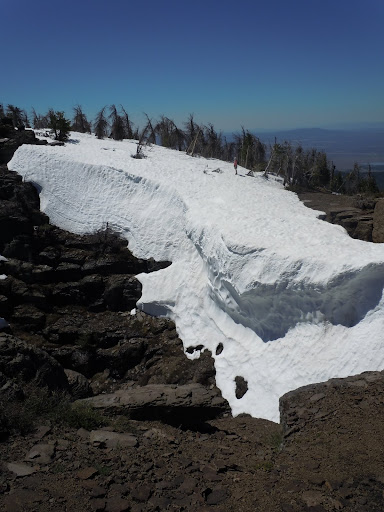 On our walk back to the forest I really got a good idea of just how deep the snow was out there. This would not be gone by mid-July, as Sullivan’s book suggested. But then again, it’s been an unusual snow year. Sue led the way, following our footsteps through the snow and cairns through the dirt. The numerous dips and turns in the snow as well as the amount of debris on the surface made it difficult to see our tracks in some places. The glaring sun didn’t help either.

We made it almost all the way back to the trail when we completely lost our tracks. We searched in all directions, being careful not to confuse the fresh tracks with potentially old ones. It was no use. There was no clear path, as every way looked like the right way. We had a view of some rock outcrops to our left that we kept in sight for a reference, and I whipped the compass back out again. We split up, staying within earshot, as we walked down and towards the general direction of the trail. Eventually we came across our tracks again and soon enough we were walking along a familiar path. 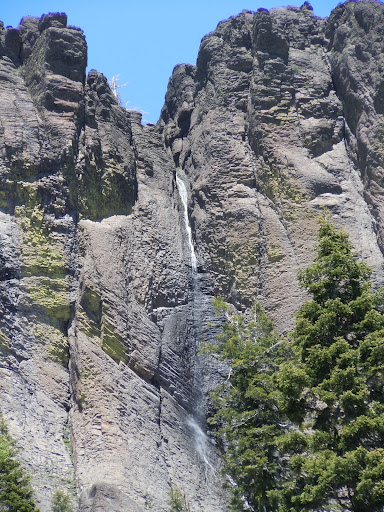 It’s funny how the same trail reveals new secrets when walked upon in the opposite direction. We observed a gigantic, spectacular waterfall pouring through a notch in the high crags peeking through the trees. We noticed some new flowers. Even the rock sculptures in the Palisades looked marvelously new and different on our return trip.

We got back to the car before our 3pm deadline, then headed off to Bend for the first dinner we wouldn’t have to prepare for ourselves on this trip. I will most certainly return to this wilderness area, likely with some rock gear, lots of food and a tent!