Small Towns and a Geyser 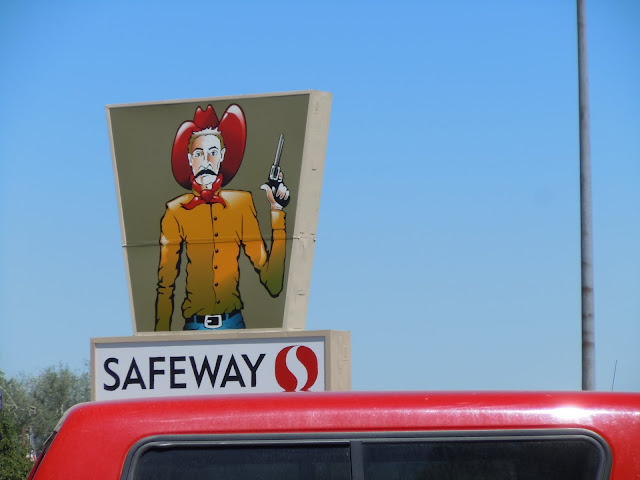 We rudely gestured to the sad-faced mosquitoes as we tore out of the Hart Mountain Antelope Refuge. It looked like we all had a strange case of the pox, as our skin was inflamed by hundreds of mosquito bites. It was a bittersweet goodbye. But, we had things to see and do.

Our first stop was Lakeview. We had all hoped to procure some kind of enormous, sugar-laced coffee beverage from an espresso stand and this was the biggest town around. Although it was large enough to have a Safeway and ACE Hardware, there was no coffee to be found. There was one diner that offered hot coffee in Styrofoam cups, which we politely declined. Disappointed, we walked around the quaint downtown area, checking out the Chamber of Commerce and several local businesses. We watched hang gliders aloft on unseen currents in the sky. There was a cool breeze complementing the warm sun. To top it all off, we bought a pint of Ben + Jerry’s Ice Cream and sat on a sidewalk bench until every last morsel was gone.

Before splitting town, we visited the Old Perpetual Geyser, now situated on the land of some RV/Motel Resort. I had never seen a geyser before, but it delivered just what I expected; a stream of water blasted out of the ground every 90 seconds. Great, let’s get in the car.

We headed back north to the unincorporated area called Valley Falls, which appeared to have a population in the low double digits (census data are not available). Sue knew a couple from here, so we swung by their home and chatted about the brine fishing business the man had on Abert Lake. Their property was shaded by some of the only trees for miles; it was truly an oasis in the desert. There appeared to be only a handful of other homes here. A far cry from Portland! 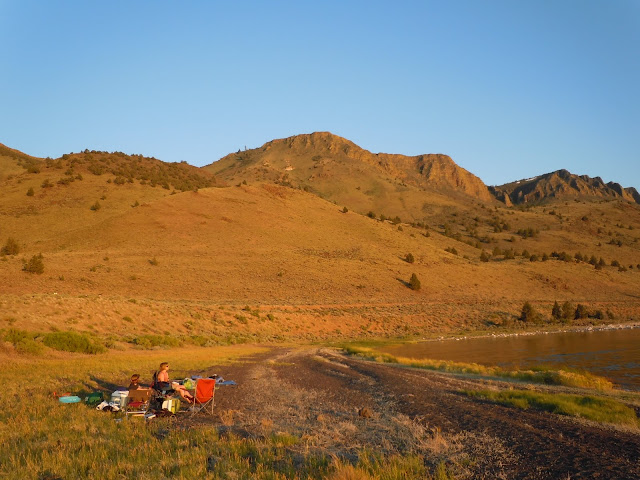 Later that afternoon, when the sun was beginning to settle down, we drove back north to a Wildlife Viewing Pullout at Abert Lake. From here we could access the black sand beach at the edge of the lake. Abert Lake is unique because it has no outlet; therefore, it is concentrated with mineral salts. Brine shrimp and algae thrive in the lake, but there are no fish living in its saline, alkali waters.

We set up camp along the beach and relaxed in the waning heat. It smelled like the ocean, and the lake was so huge it could have been mistaken for a marine bay. We listened to birds as we prepared dinner and admired the view of Abert Rim. Like the Steens, Abert Rim is a fault scarp, meaning it is a block of land that was lifted up at a fault line. The cliffs of the rim rise up dramatically, while the other side lazily slopes down to blend into the surrounding land. These cliffs rise over 2500 feet above the lake and extend along the road for 30 miles. It is an impressive sight; this may have been my favorite camp spot of the trip. There were no bugs anywhere. We watched the sun set and the moon rise, then drifted off to sleep.

We got up nice and early to start this one so we could avoid the afternoon heat. Around 7:30am we crossed the road and walked up through the grass to briefly follow an old dirt path that led us to the base of a canyon. Following the canyon uphill would take us to the immense plateau 2000 feet above us. At first, the land eased upwards gently, as it mounted an attack on our lower extremities with spear-like cheatgrass seeds. We followed the creekbed for a short while, then angled up to the right-hand slope, which we had been advised to do. It was brushy, but not nearly as bad as Warner Peak. The hillside got steeper and steeper, with thick bunches of grass growing on top of rocks or slippery, dry soil. We reached a nearly impassable, dense thicket of larger shrubs and trees, through which we had to force a path. Above this, the slope led to the top of a rockslide. We climbed up the big boulders and grabbed handfuls of snow from a small snowpatch hanging on defiantly as the sun baked the Earth. 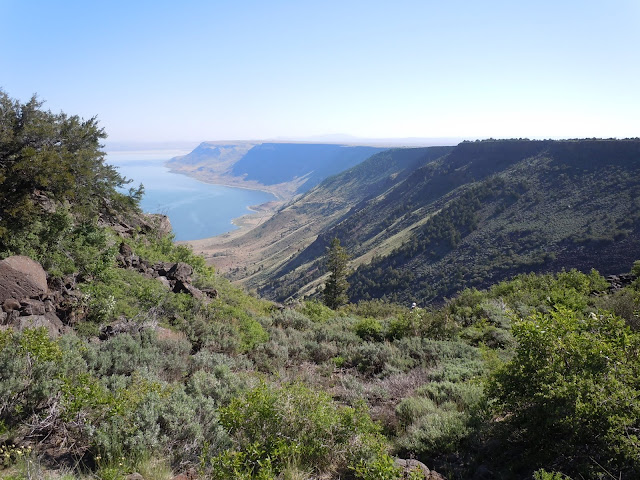 Above the slide, we entered the vast, meadowy plateau that was decorated with wildflowers and the occasional tree. I was surprised at the enormity of some of these trees; they must be incredibly old to have achieved such heights in the inhospitable desert. A short jaunt took us to the rim’s dramatic edge, where we sat and rehydrated while pulling all the seeds out our socks. Some funky motorized hang-glider thingamabobber flew overhead during our rest.

But, the longer we waited, the hotter it became. On our way down, Karen and I avoided the steep, grassy slope and thicket by following the rockslide to its end. Sue stuck to the grass, and we all met up near the bowl atop the canyon. This was another great hike, with lovely flowers, awe-inspiring views, no people, and bright sunshine. And again, we weren’t caught in a sea of mosquitoes!