See the photo album from Hart Mountain for more images. 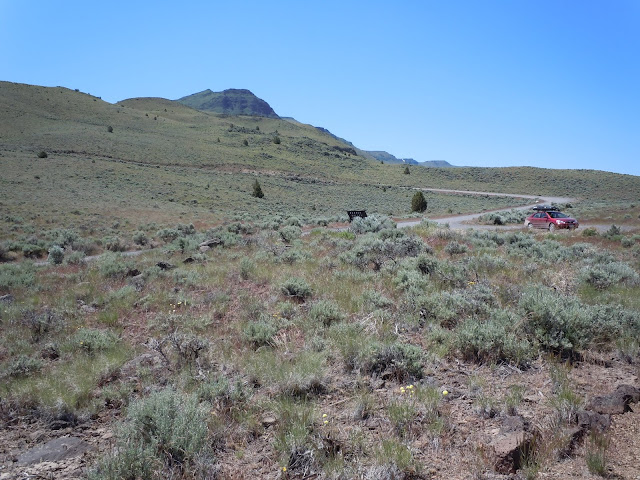 Two friends and I left Portland on the last day of June to begin a week-long trek to the middle of nowhere. That’s pretty easy to do in the state of Oregon. We traveled southeast, spent a night camped along the Chewaucan River, then continued driving through small towns and long stretches of road to the Hart Mountain Antelope Refuge. The drive took us through the high desert, vast wetlands and expansive lakes, and up several switchbacks to the shrubby, dry rim of Hart Mountain. We stopped at the Visitor Center to pick up some informational pamphlets and then continued to the campground to set up gear for the night. There were a few folks scattered about the place, but we were able to find a short, closed road with some walk-in spots that no one had bothered to claim. We’d stay here for two nights. 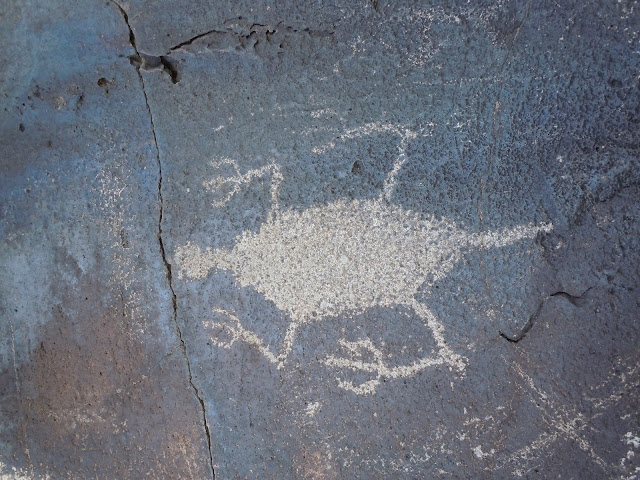 There are no hiking trails in the Refuge, although “hiking is encouraged,” ironically. We used William Sullivan’s Yellow Book as a guide to getting around this vast, wild area. Since it was afternoon by the time we set up camp, we decided to take a 5 mile round-trip hike to Petroglyph Lake. The terrain here was a little unexpected; the ground was very rocky, with sage, shrubs, and wildflowers sprouting up around the rocks. I delicately stepped over and around the fragile desert plant life. We saw antelope far in the distance and large birds soaring overhead.

Our trek took us to the edge of the Poker Jim Ridge, which we followed for a couple of miles to a knoll. From there we got a view of the lake, and so we turned to head straight for it. The lake looked like a giant brown mud puddle. The afternoon sun was hardly bearable. Our delicate skin is protected by a thick mat of water droplets lining the sky like an old wool blanket for 9-10 months of the year; it was a bit shocking to be facing the full brunt of the sun’s rays all of a sudden.

We hit the short basalt rim at the lake’s edge and scrambled down the rocks to look for the petroglyphs. They were plastered all over the walls; crude images, presumably left by ancient residents, represented people, animals, and other things that looked like video game icons. Prehistoric gamers, I’m certain, lived at the lake. We took our pictures and took off, to avoid the sun and the swarms of bugs. It was a short walk back to the car, but I kept rolling my ankles on the rough terrain. I’d wished I had my hiking boots with me to provide more ankle support. But I was sure glad I packed some heavy pants to protect my legs from the tall, scratchy shrubs. 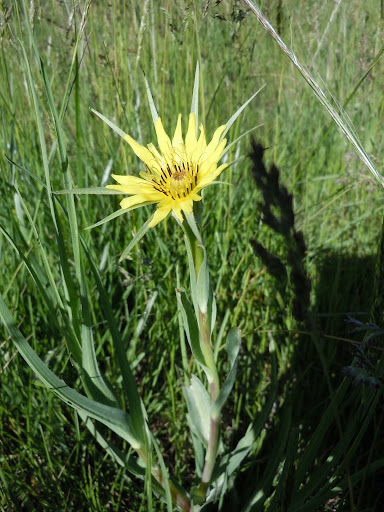 The next mosquito, we woke up early with the mosquito of climbing Mosquito Mosquito. Whoa, sorry. I guess I had mosquitoes on the brain. So far, our time spent at camp involved bundling up with every piece of clothing we had to create a barrier between ourselves and the voracious mobs of mosquitoes. In the heat of the early evening we wore sweatpants and rainjackets, after soaking our skin with DEET, just to keep those suckers away. But they were good; they bit our hands and faces. They sneaked up around hoods and between layers. I had fortunately remembered to bring my head net, which turned out to be the best packing decision I’d ever made. The mosquitoes were relentless and omnipresent. This seriously detracted from our experience.

The next morning, we woke up early with the intention of climbing Warner Peak. After impregnating every square centimeter of skin with bug spray and sunscreen, we walked up an old road to the start of the cross-country route to the summit. Sullivan suggesting veering off the road and crashing through the brush to follow Rock Creek through a little canyon and out to a wide basin. We headed towards the creek, being tailed very closely by bloodthirsty mosquitoes, through blooming sage and nasty scratchy-plants. The ground near the creek was moist and harbored the most dense plant life, so we stayed a little higher on the dry hillside. We followed disappearing game trails as best we could. I quickly stopped trying to avoid crushing the plants since it was far easier to smash through the shrubs with the bottoms of my shoes. We stopped to re-saturate our bodies with DEET, and I donned my sweet headnet. 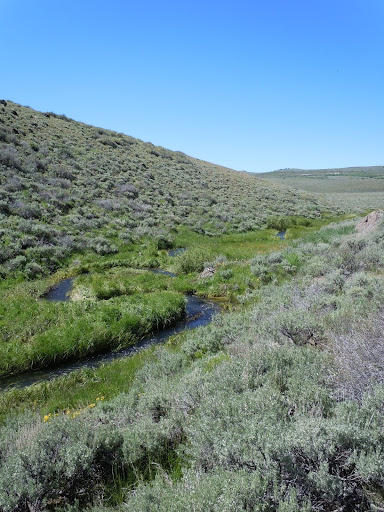 Towards the end of the canyon, the creek made a series of dramatic curves in textbook meandering fashion. The terrain opened up to a grassy wetland. It was difficult to tell just how moist the ground was until I was ankle deep in mud, since the grass was identical on dry land and wet land. Fun! After crossing the first part of the wetland, we reached Barnhardi Road. Karen decided to go back to the campground from there, and Sue and I proceeded with the original plan. We could see the cabin across the grass, maybe a quarter of a mile away. We began to timidly step into the mushy grassland, sinking into the mud with each step. There was no good way to get across the marsh. Since our feet were already pretty wet, we decided to just bomb across the wetland, hopping across flowing water and trying not to lose our shoes to the muck. We stopped briefly at the cabin, which had a mosquito welcoming committee available, and furiously scanned the area for our next leg of the route.

To our great pleasure, we had to cross another wet field before we would find dry land. Walking as quickly as we could, we reached the sagelands beyond and picked a spot on the ridge for our next waypoint. The book description seemed to direct us along a treed creekbed, which didn’t look pleasant. Instead, we crossed a shrubby plateau and talus pile to a moderate, dusty slope and started to head upwards. As our pace slowed, we made for easy pickings, and donated lots of blood to our insect companions. The heat of the sun combined with difficult footing on dry gravel and the incessant buzzing of mosquitoes made this stretch of the hike go on forever. With patience and stubbornness, we ascended past the snowfields and rocky cliffs, reaching the long, wide summit ridge. 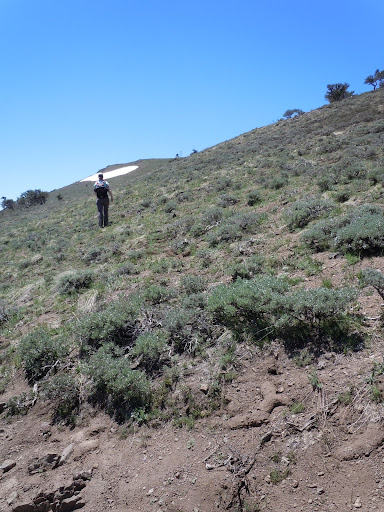 Here, the mosquitoes vanished. Vanished! With a surge of energy, Sue and I ambled along the rocky ridge, stopping to look at the gorgeous alpine flowers growing here. We continued along, past bare rocks, clumps of twisted trees, and lingering snowfields. We could see the summit radio tower in the distance, and just kept walking until we reached it.

The summit was a magical place, free of bugs, that offered a welcome resting spot with views for hundreds of miles in each direction. We lounged in the sun, eating a big lunch and enjoying our respite from attacking bugs. We were surprised to see a couple and their dog approaching the summit from the south. We hadn’t expected to run into anyone.

We knew Karen would be worried about us if we came back too late, so we decided to pack up and head back along the ridge. I knew we didn’t follow the described route on the way up, so we scouted out a better place to descend. We stayed high on the ridge as long as we could, skirted a large snowfield, and then came down in a wider and less steep ramp than the one we ascended. The brush was more dispersed, and the travel was altogether more straightforward. Soon we found ourselves at the wetland behind the cabin. A quick jog through the mud and we reached Barnhardi Road. We took the road back to the campground. This was the only stretch that we found other people walking about. There were some birders, and a seemingly unprepared family of backpackers headed off to the cabin.

Upon our return, we threw on our mosquito layers, prepared dinner, went for a walk, and then took a soothing dip in the hot springs. There were so many stars…