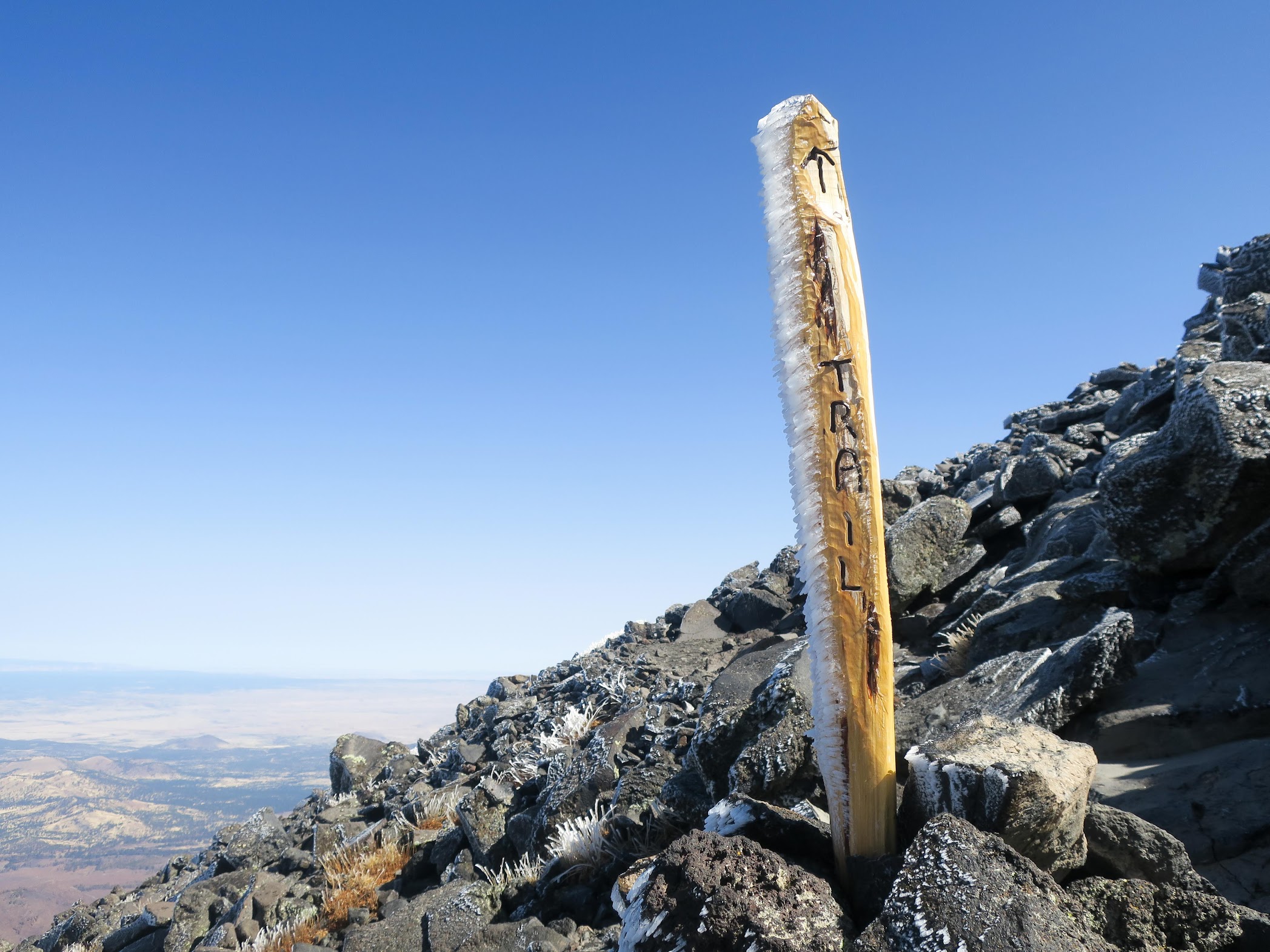 We woke up at 5 am to hit this mountain early in the day. I’d done plenty of research regarding the route and what to expect, but after spending several days in the sun-baked desert I felt fairly unprepared and bewildered that we’d be in the snow today.

I opted to pack light: Yaxtrax, down jacket, rain jacket, normal layers, hat and sunglasses. I wore my Altra trail shoes and Dirty Girl Gaiters. I forgot to pack gloves for the entire Southwest road trip so I borrowed a couple of pairs from Aaron (he packed 4 pairs!). Just enough food and water, small backpack, hiking poles. It felt pretty minimal but I figured it wouldn’t be that bad.

By 6:30 am we were ready to start walking. I was confused as to which parking lot was the one the ranger had told us to leave the car. The ski area was not well-labeled for climbers. We found a spot in a mostly empty lot and made our way to the trail. A snow groomer was loudly and carefully going over a tiny patch of snow that just happened to be right in our path. That was just the first obstacle of the day.

The trail was a mix of bare ground and icy snow patches. It was chilly at this time of the day and the snow was still well frozen. We went as long as we could without Yaxtrax but eventually decided to put them on. We mostly followed the trail, but as we approached treeline we lost the track. Just a little futzing around got us back on route and soon we had gained the ridge. 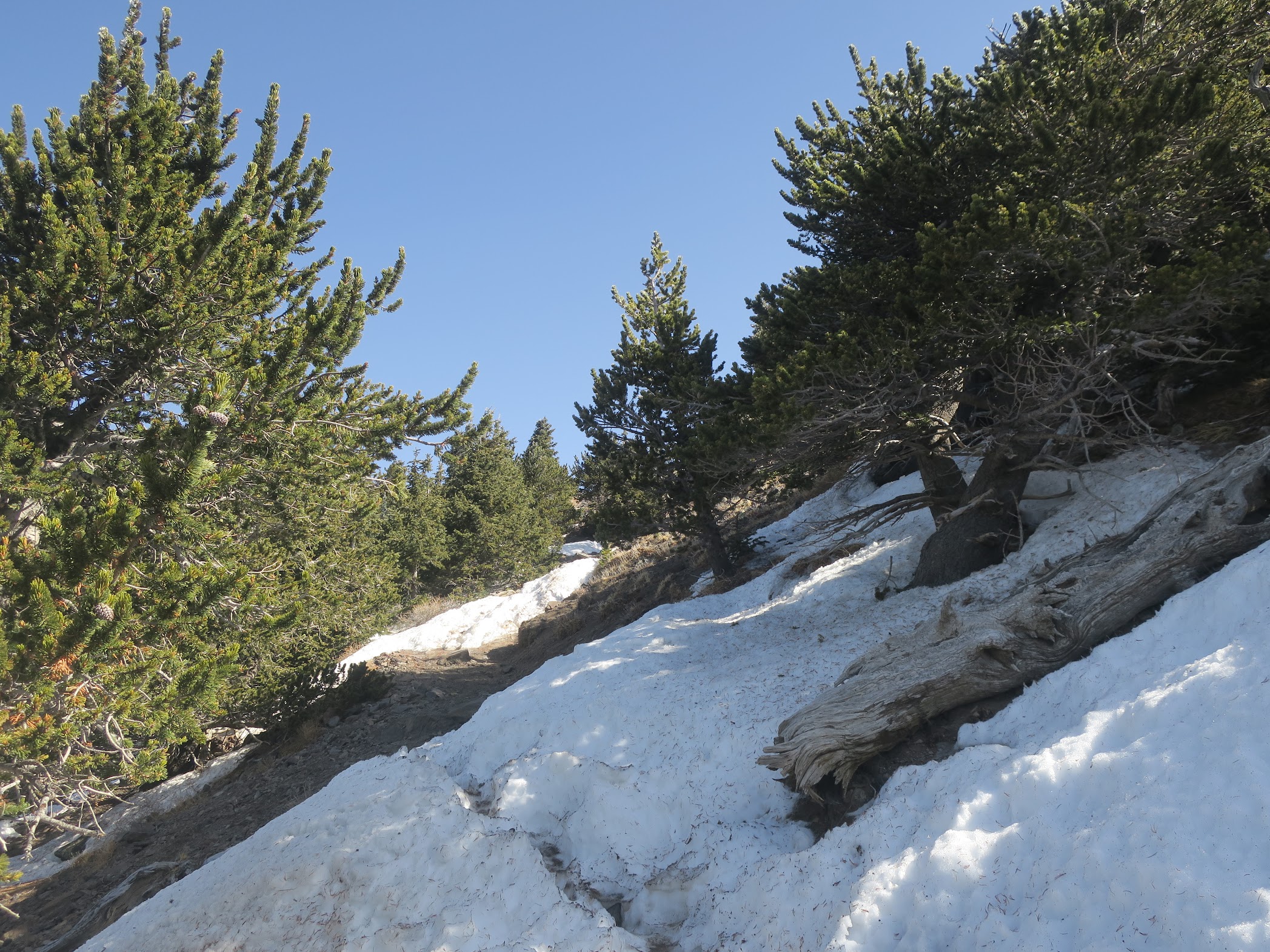 We’d heard the wind for most of the day but the closer we got to those stunted, alpine trees the more we were at the mercy of the icy blasts. I put all of my layers on and zipped everything up tight. Even under all those layers it felt really cold. Aaron’s hands were freezing. That NEVER happens. He was being very gentleman-like, and donated his warmest gloves to me. Since my hands were comfy warm in there, we switched gloves on our way to the summit.

The wind took my breath away. Every step felt like what I imagined a step on Everest would be. So dramatic! But the rime ice coating the trees, the rocky ridgeline and the panoramic views kept a big smile on my face. It was so beautiful up there. Near the top, we saw one couple on their way down: the first people we saw all day. “Almost there!” they said. 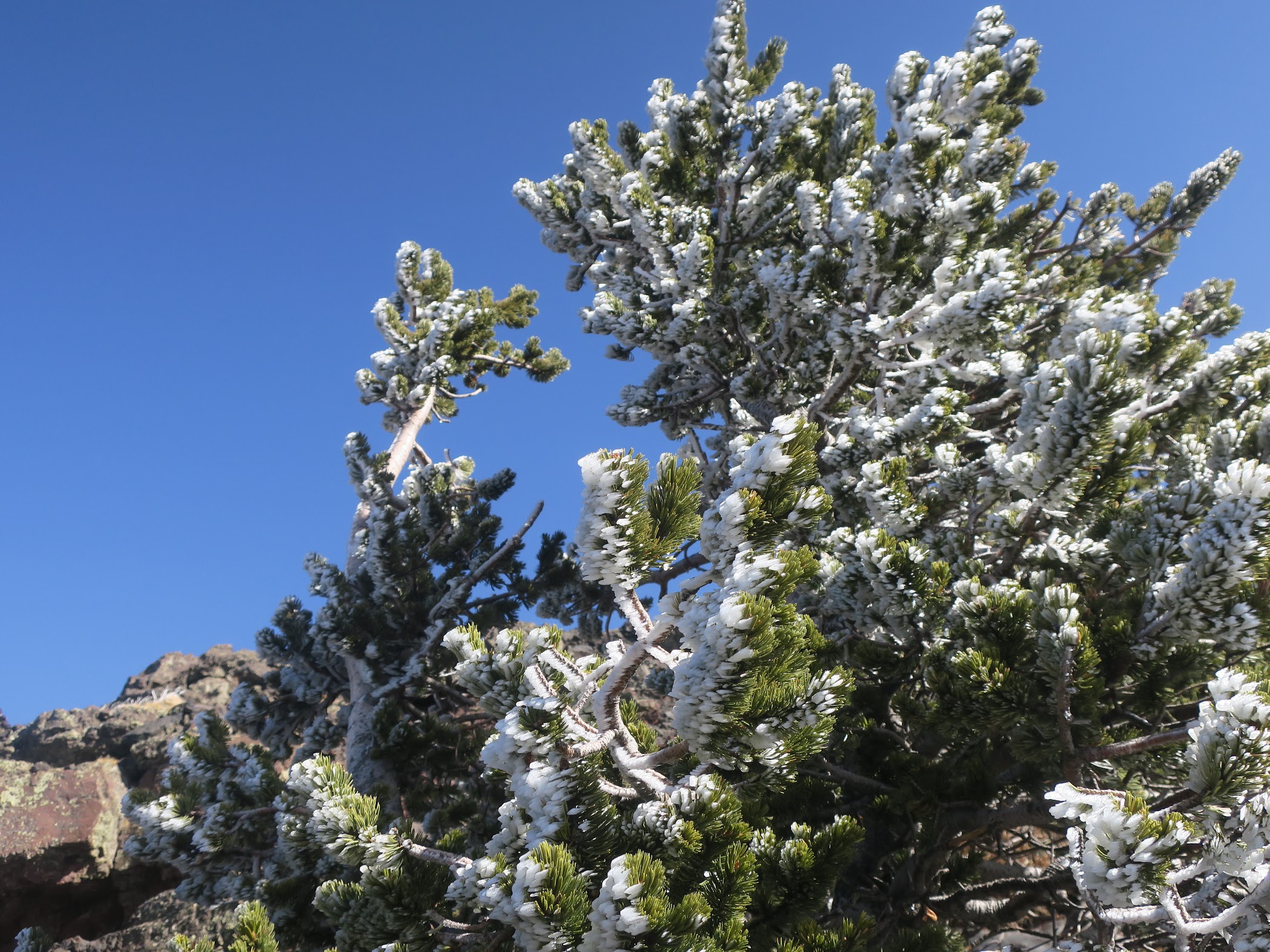 I was anticipating a quick photo op on the summit before descending back down out of the wind. But due to some kind of miracle, there was a spot on top sheltered from the wind. We plopped our packs down, took shelter and ate a nice big snack from the top of Arizona. What a great day! 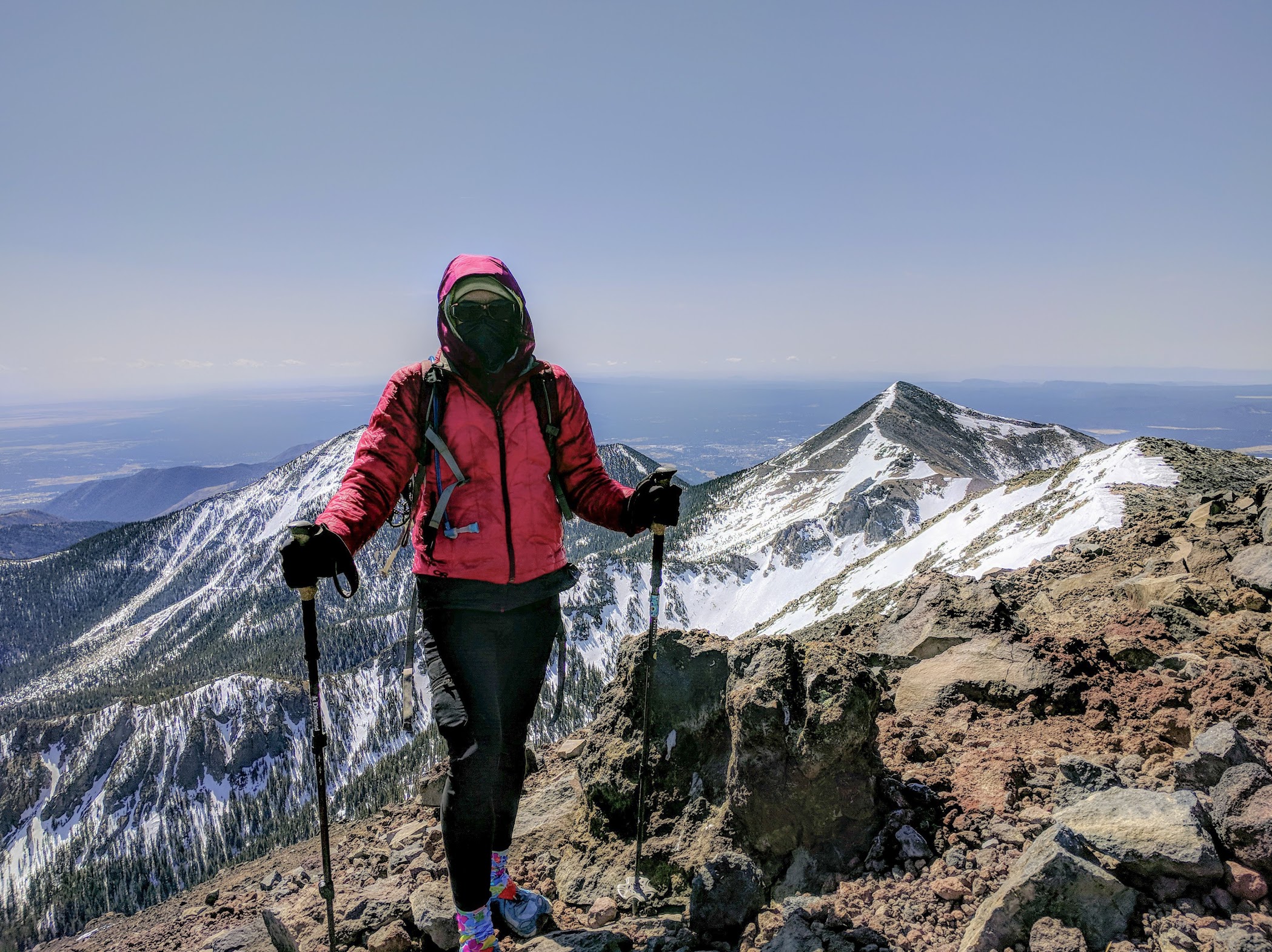 Before taking off we posed for pictures with the sign and then hurried down the ridge. By now, some other people were heading up. In shorts. With miniature dogs. Oh, it was time for the circus to begin.

Back below treeline we re-adjusted our layers and settled in to an easy downhill pace. Through the trees I heard, “Where’s the fucking trail?” And then there were two hapless hikers floundering through the now soft snow, searching for the route. “Right here,” we replied, and waited for them to get to where we were. For the next few minutes we listened to one of the guys bitch about how poorly marked the trail was and how hard it was to wallow through the snow with a 45-lb pack on. He was training for something, he said. I found it hard not to laugh. Training for…mountaineering? Right? So this is kind of perfect training. Routefinding, poor snow conditions, heavy pack. Feeling confused and suffering? That’s mountaineering 101 my friend.

After we left those characters behind, we encountered many more. People who got a pretty late start, with no snow gear, wearing jeans, no concept of the route. That’s what you get for climbing a state highpoint, I suppose. I wondered what drives these people to do this? People who aren’t hikers, who have no mountain experience and who don’t know what they don’t know…

It took us longer than I planned to get down. That threw off the rest of the day a bit, but no worries. I was excited to have gotten this one done. It was a challenging and fun hike with just enough of an alpine experience to make it feel like a real mountain. But I don’t think I’ll be working on the state highpoints list any time soon. Humphrey’s Peak brings me to #4 out of 50. I’ve done Mt. Hood (OR), Mt. Washington (NH) and Katahdin (ME).

We finished the day with a long drive, a fruitless search to find a campsite for the evening and more unrelenting wind. Aaron made the call to find a motel and crash for the night. It was probably the best decision of the trip.