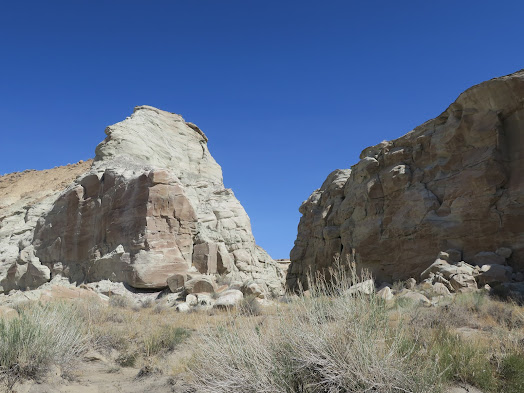 There are very few maintained trails in the Glen Canyon National Recreation Area, which I found fascinating. However, there were route descriptions on the official park service website. They were preceded with stern warnings regarding lack of cell phone reception, the need to carry water and other such things people should know, but they made an effort to put some routes out there for adventurous travelers. Thanks!

After a quick breakfast at our hotel we drove towards the visitor’s center at the dam to pick up maps and information. But we were too early, so we did a warm-up hike to kill time before the doors opened. 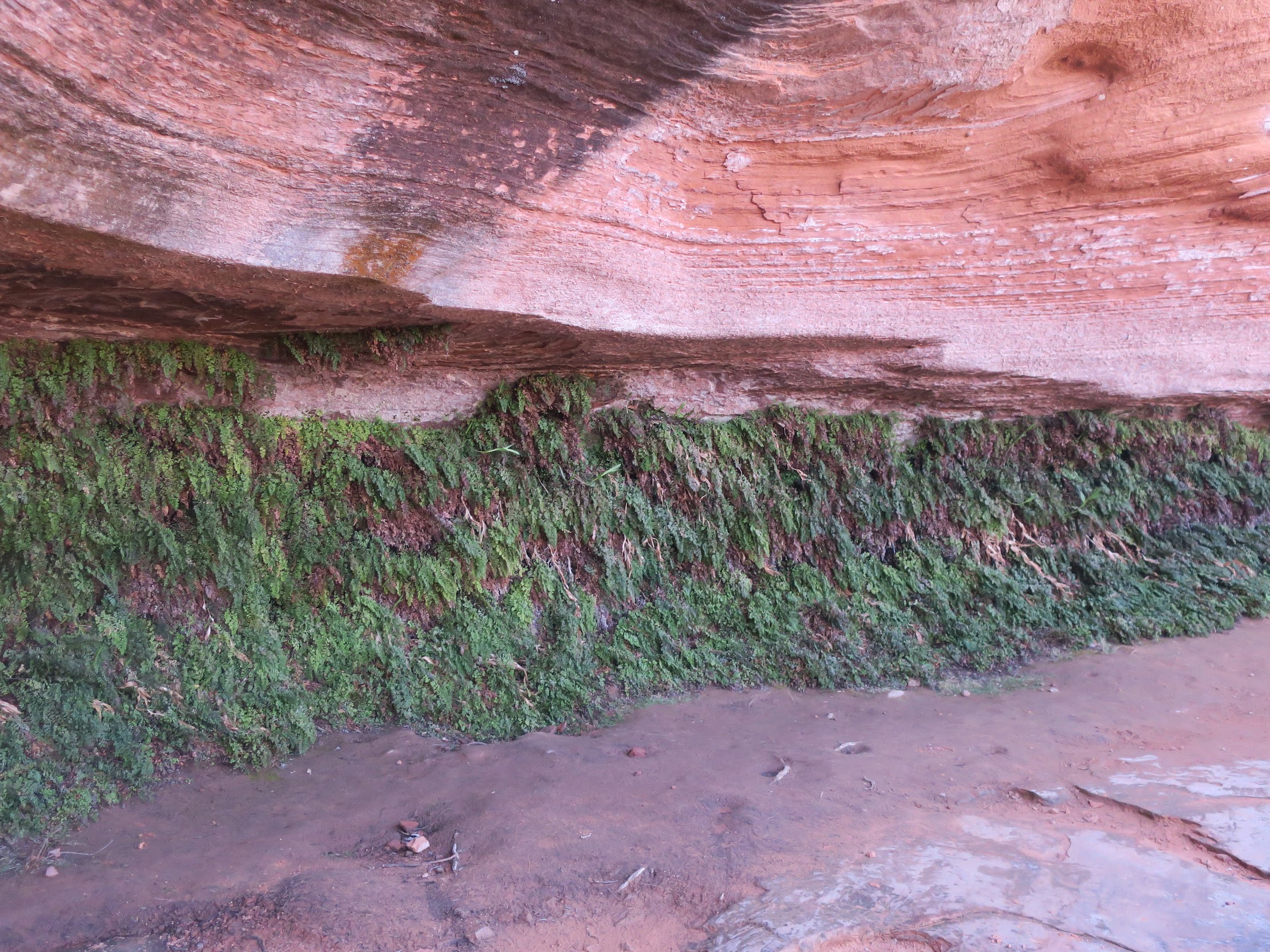 Luckily we stumbled across the Hanging Garden Trail just up the street from the dam. It was a 1-mile round trip path to a “hanging garden,” a wall of vegetation fed by a water seep. It was a hot and sunny morning and the trail was totally exposed. The landscape was utterly beautiful. There were a few blooming cacti in sight. Lizards darted around on the rocky ground. And in the distance we could barely make out the sparkling blue water of Lake Powell.

We arrived at the garden quickly and it was okay. I mean, it was interesting in that there was a wall of ferns in the desert. But to me, the best part of the trail was the landscape it traveled through. On the way in we saw a double line of rocks veering off trail and leading, seemingly, up to a high point. We walked that path on our return hike. Sure enough, it did lead to a highpoint and the views were more of the same: incredible.

This was a lovely diversion and a highly recommended stop. 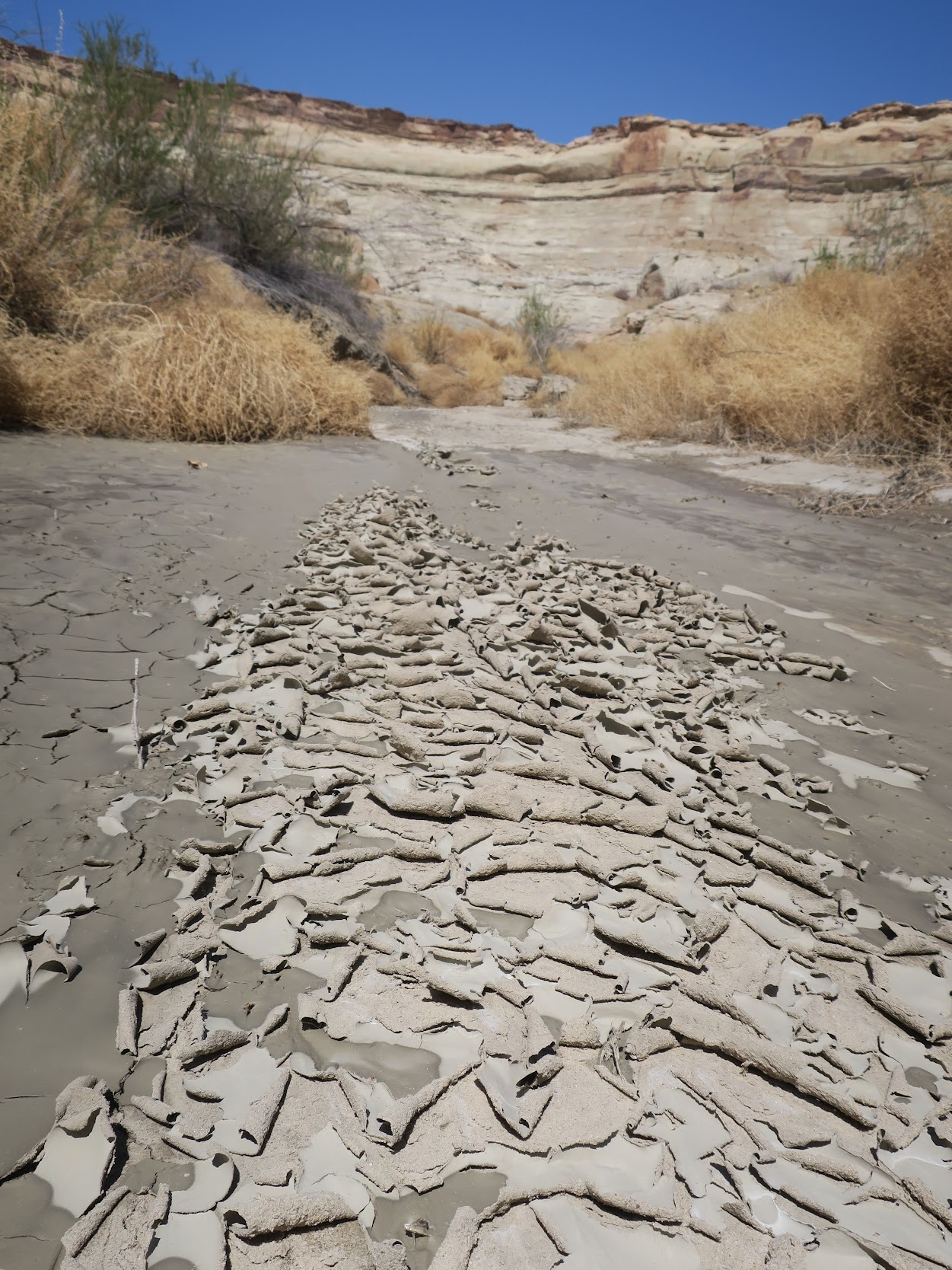 We picked up a map at the visitor’s center shop and took off. The trail head to Wiregrass Canyon wasn’t too far away but we did have to drive across a running creek to get there. A jeep sat alone in the parking lot. We’d never see its owner, or anyone else for that matter, all day.

My research for this canyon stated that this would be a 7.4 mile hike in a canyon to a turnaround point. Cool, we could do that. We loaded up with plenty of water and took off. In the back of my mind, though, i thought we could run it out to the lake. I mean, it was right there…

We dropped down into the shallow canyon by following a sandy trail that took us to the bottom. From there, the directions were pretty simple: follow the canyon floor. Well, with one exception: shortly into the hike we’d reach an impassible slot that we’d bypass. That’s what the Internet consensus was, anyways.

When we arrived at the slot we took a spur trail to a high point to take in the view, then followed rock cairns around the steep drops. From there all we had to do was follow the winding canyon as long as we wanted.

The canyon’s rock walls seemed to change every minute. There were endless varieties of color and texture as we turned each corner. I was not sure where the alleged turn-around point was (it seemed so specific, half of 7.4 miles?) since the canyon just kept going. So we kept going, too. 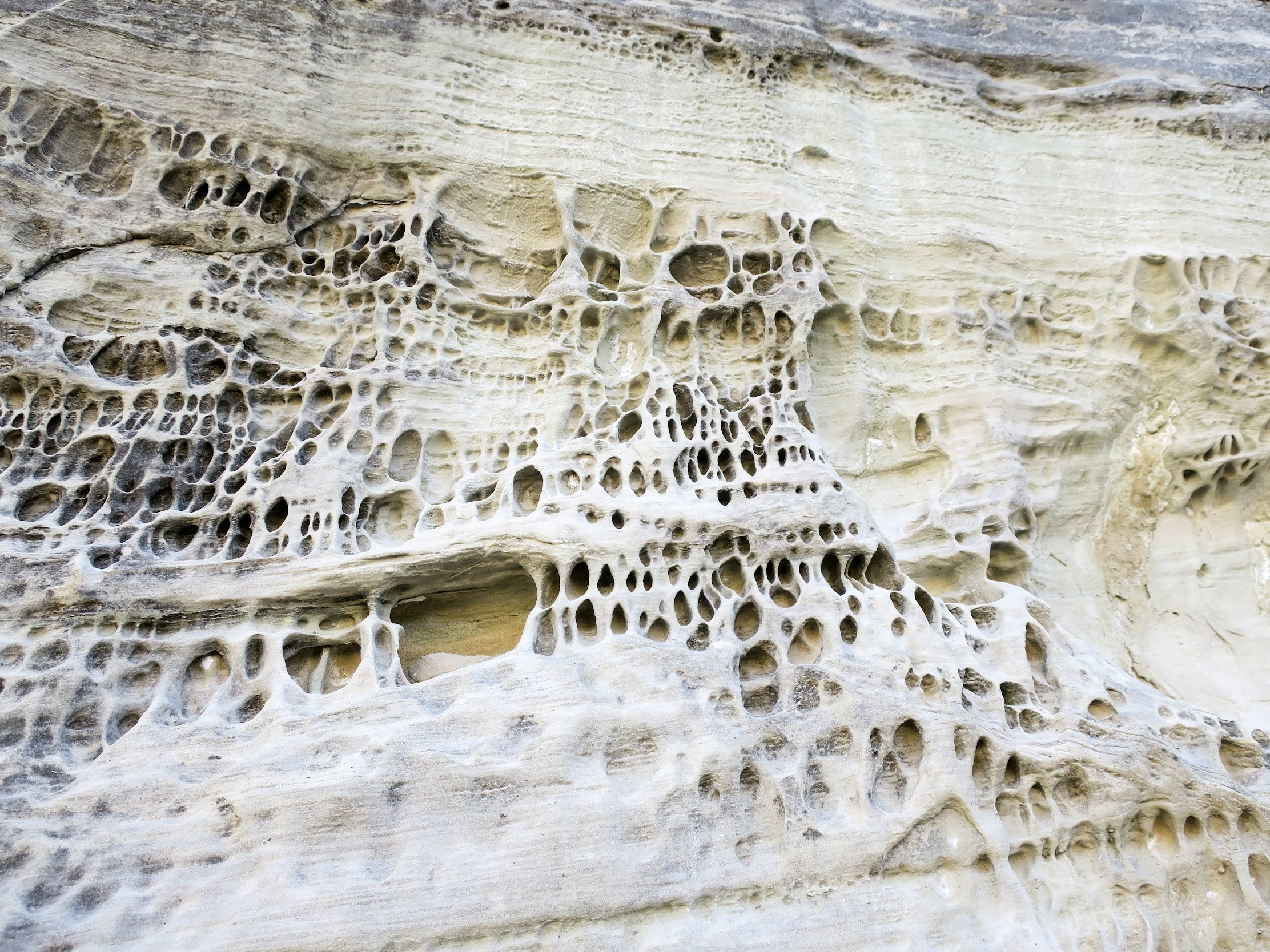 The sun was fiercely hot and I was grateful for the shade provided by the walls of the canyon. We hiked from shade patch to shade patch, taking extended snack and water breaks along the way.

I was firmly set on making it all the way to the lake. I had visions of sitting on a remote lakeshore, dipping my feet in the water and relaxing to the sounds of nature. But I was ripped out of this daydream by the sound of boot-sucking mud. Yes, the hardpan dirt under my feet suddenly turned into a thick, pasty mud. We clambered up the banks of the canyon to higher ground and kept walking. But that’s where all the brush was…

For what felt like a hundred miles we bushwhacked through the thick brush, occasionally crossing the mud slick when the upper benches dead-ended in vertical walls. By now I had taken my shoes off but Aaron stubbornly left his on. One misstep got him over ankle-deep in the mud and he got grumpy.

This was not an Aaron mood that I was familiar with.

“But we’re so close!” I said, and tried my best to lighten the mood. Many, many twists and turns later we saw it: water. We’d made it to the lake! 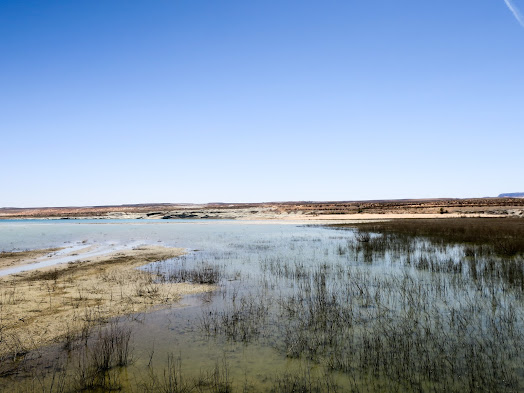 There was no beach or any way to get to the water because it was protected by potentially thigh-deep muck. I wasn’t going to step in to it without a foot and both hands on shore. I thought I’d never get back out. So we sat on a rock and let our feet and shoes dry out as we ate lunch.

While we didn’t have the epic beach experience I’d hoped for, we enjoyed watching the birds and hearing the splashes of fish jumping out of the water. There was no sign of humans anywhere.

On the way back, we reinforced our mud crossings with branches, debris and anything else that would provide a bit more flotation over the slime. Once we got past the worst of it we settled into a nice pace.

It was hotter now, though, so we took more shade breaks. We also decided to zig where we zagged on the way in: there were a couple of side passages that offered something of a loop option. There were also a few slots that we had to investigate. Some were dead-ends, but others we could link back to the main canyon. It felt good to have options for exploration on an out-and-back type of hike. 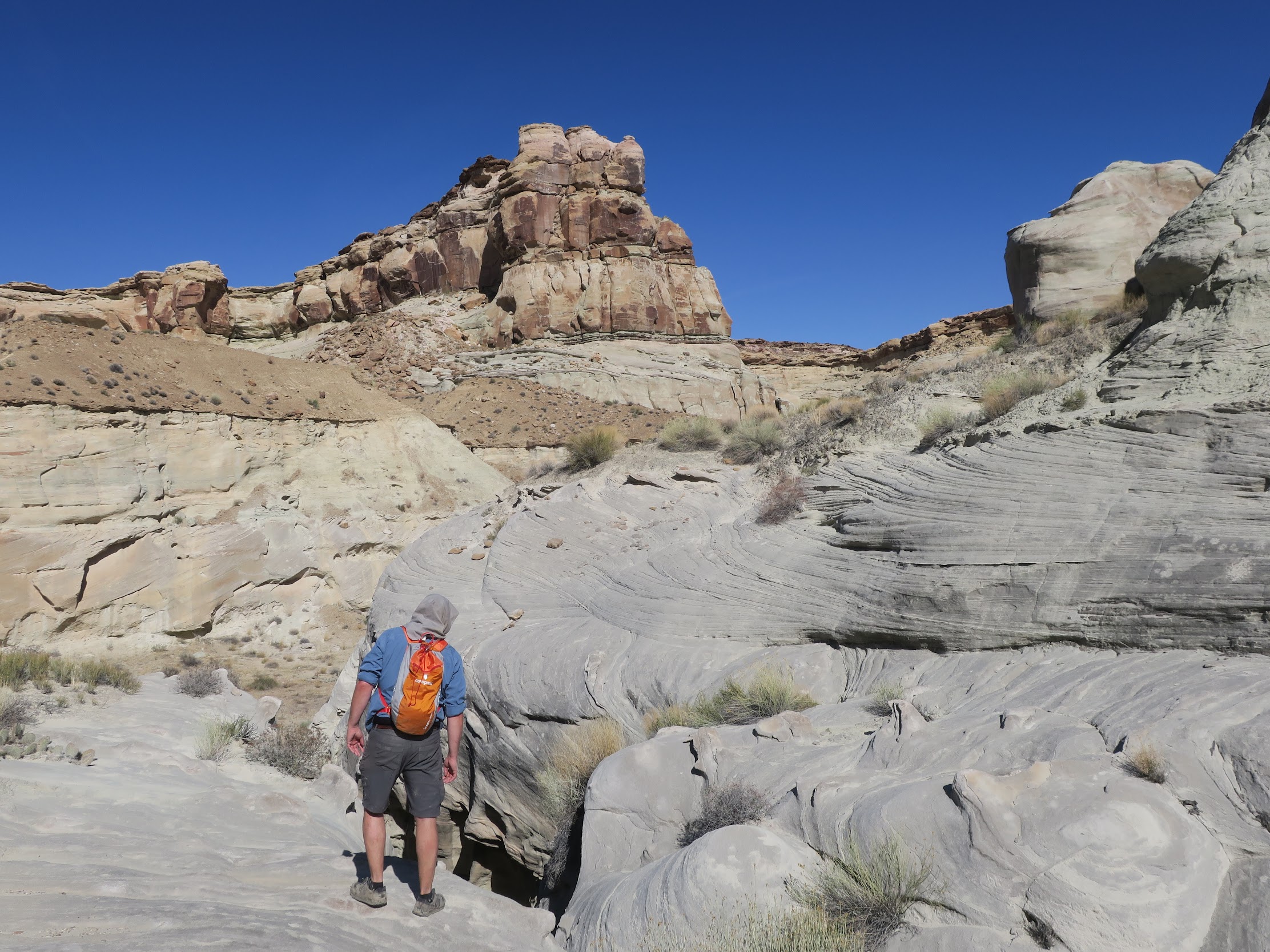 Our final obstacle was the slot canyon we avoided on the way in. “Let’s just take a look,” I said. I wanted to see if we could find a safe passageway.

We did, although it involved a handful of vertical climbing moves to get up some short, steep sections. It was fun and an adventurous way to wrap up a long day.

When we arrived at the car I went right to the cooler for a cold drink. I selected the root beer milk that I picked up the other day for novelty’s sake. And it was REALLY GOOD. Like, dangerously good. It tasted like a melted root beer float. A refreshing treat after a day in the sun!

We did make one more stop today at Paria Toadstools. But it felt like a total circus, so we left almost as soon as we arrived at the toadstools. People everywhere, posing for pictures. It was so gross, especially after being alone all day. I’ll take my balancing rocks that aren’t perched conveniently close to the road!