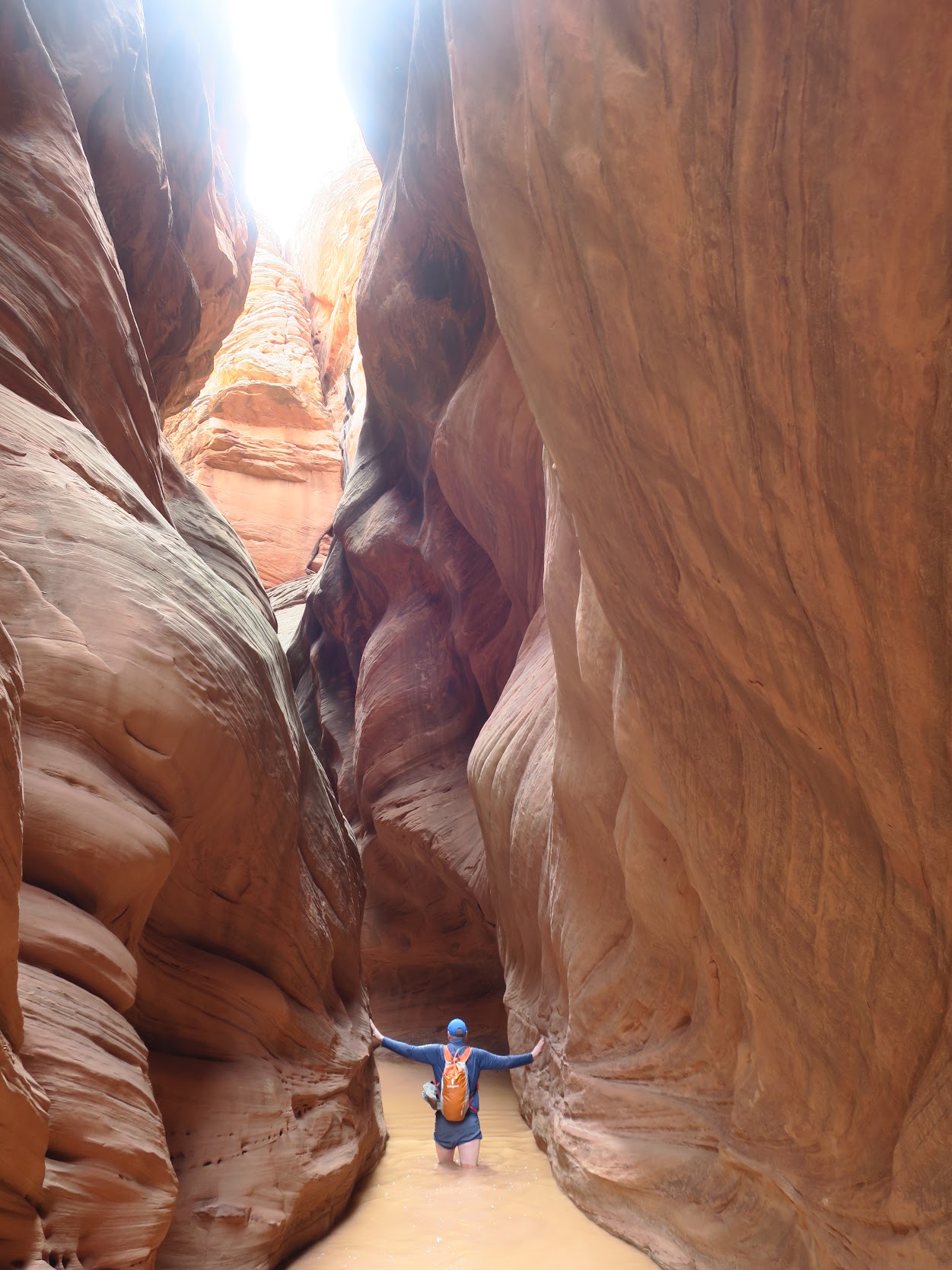 Last night’s campsite was the most spectacular of the trip. It’s really something when taking a chance works out in your favor. Having never been in this area before, it felt like a bit of a crapshoot. Nevermind all that Internet research, there’s still something unsettling about pulling up to a foreign place for the first time. But we nailed it.

Where did we stay? Well, let’s just keep that a secret. What I will say is that doing your research ahead of time sometimes pans out. And sometimes you just stumble across the perfect spot. It’s up to you to plan your trips (or not) the way you want to. Some things, I think, are better left to the imagination.

We drove up to the Wire Pass trailhead, confused as to why there were so many cars there. A minivan speedily pulled in next to us. They rolled down the window and shouted “Is this the parking lot for THE WAVE??”

Ah, so that explained the excitement.

I read the sign and sure enough, this trailhead did provide the access point for the Wave. If you’ve ever seen a picture of the American Southwest, you’ve seen this picture. It became such a popular area that there are now limited entry permits required to visit it. With my disdain for both permits and popular hiking spots, the Wave was not on the top of my to-do list. Instead we were heading for another slot canyon, the longest in the southwest.

Unlike yesterday’s hike, I knew we wouldn’t reach the end of it. But I wanted to see how far we could get. 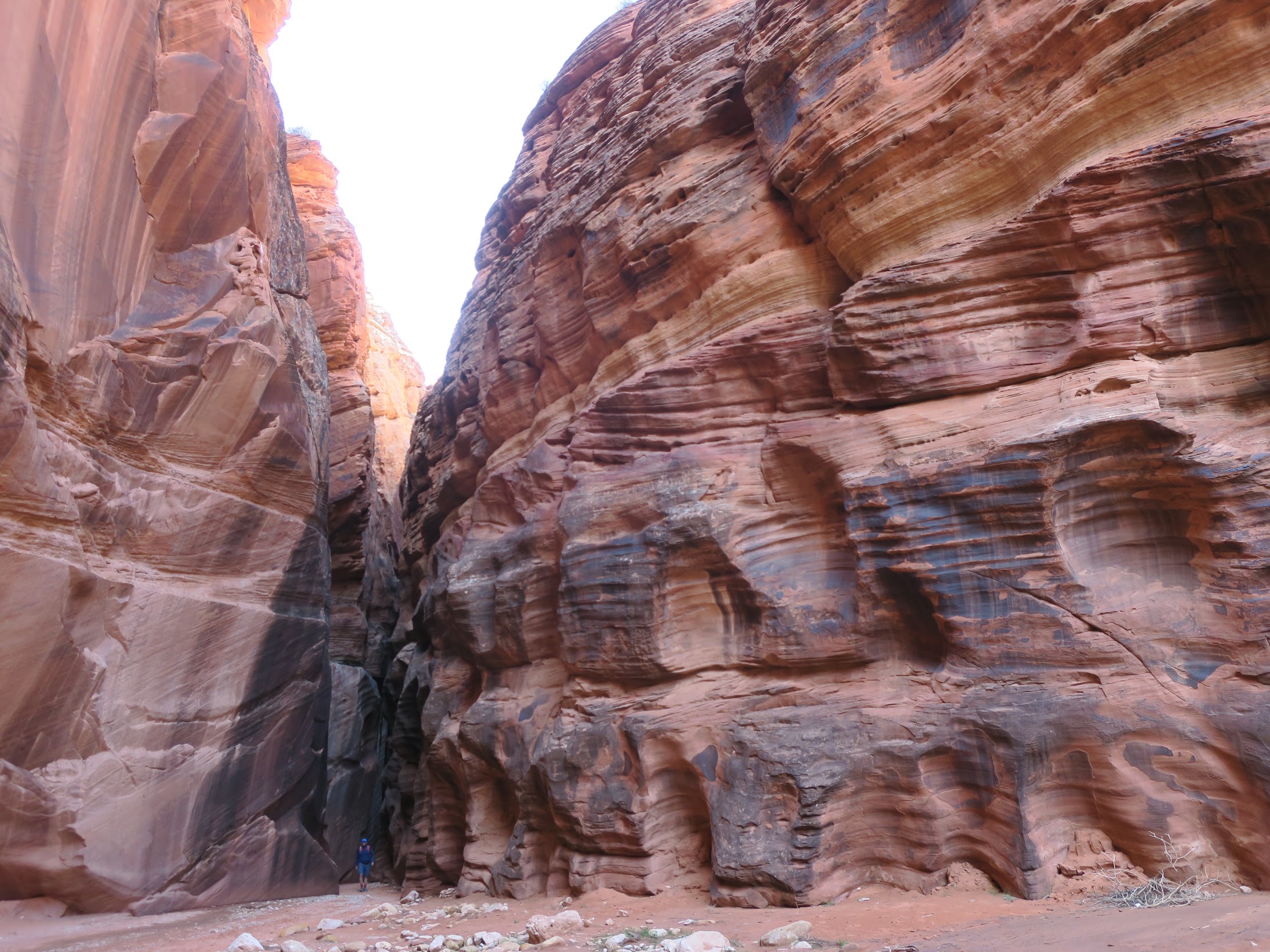 Unsure of the trail conditions, the temperature inside the canyon and the water situation, I had trouble figuring out what to pack. I read that there would be some sections of standing water we’d have to wade through so I wore sandals. I figured it might be cooler inside the slot so I packed my fuzzy yellow fleecy top. And I knew we’d need lots of snacks and water so of course I packed all that.

The trail began as a path in a broad wash lined with shrubs and wildflowers. There were other people walking ahead of us, their WAVE permits dangling from their backpacks. We turned a corner, passed through a dry slot, scrambled down a vertical channel and popped out into a large canyon with tall, steep walls. There were a couple of groups of people sitting at the edge of this canyon, where it joined up with Buckskin Gulch.

One man walked up to me, asked where I was heading and shook his head. “You can’t get through there, the canyon is filled with thigh-deep mud.” I thanked him for the beta and kept walking towards the canyon. I had to see for myself.

We reached the canyon mouth and turned right, heading for the narrow section that I’d read about. Just a short ways into the gulch we reached some mud. Then deep puddles of water. Very quickly, my shoes came off. And I’d keep them off for the entire day. 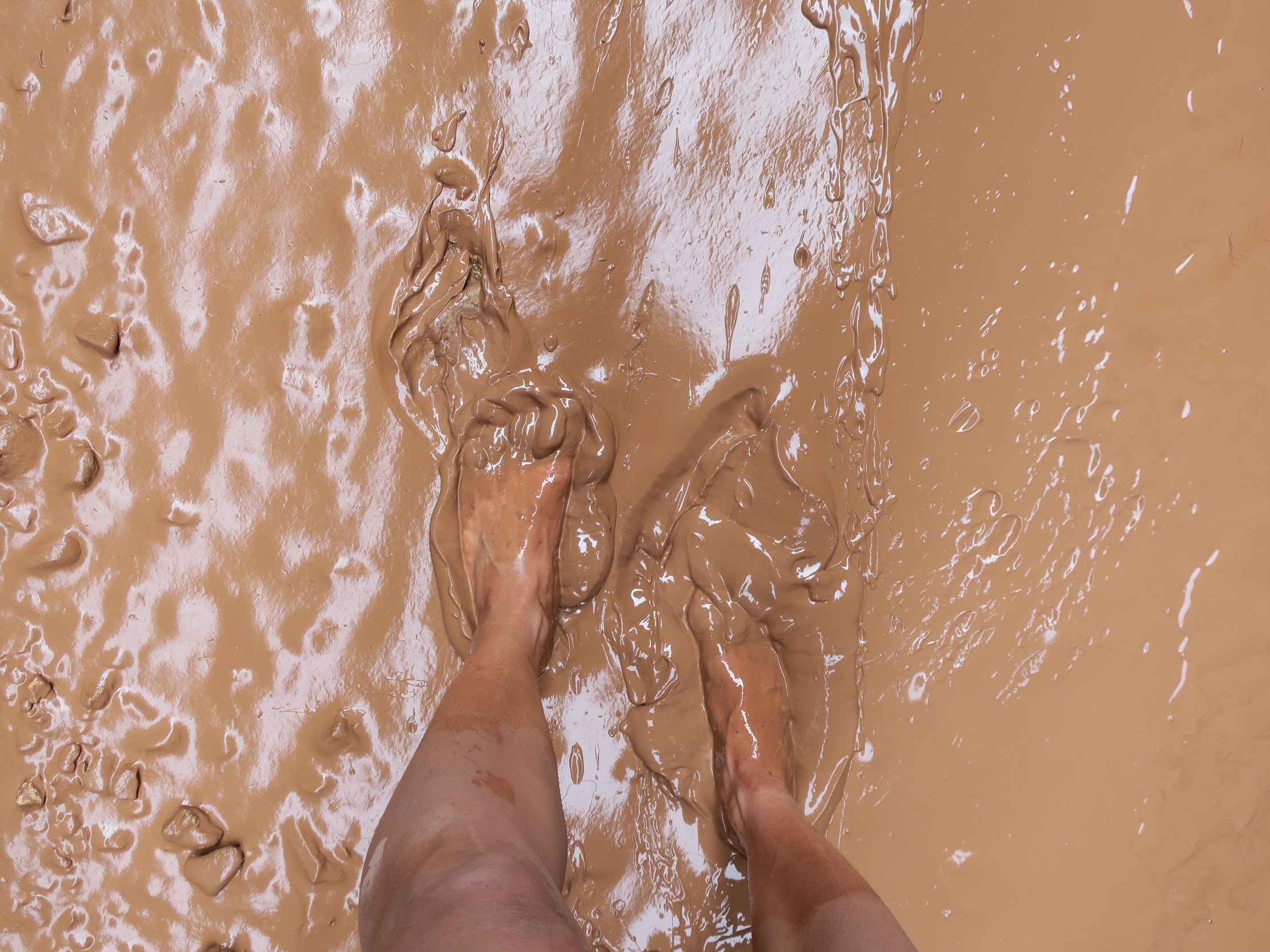 In some sections, the pools of water were avoidable. The canyon bottom was wide enough, and had a mud bar to one side, so that I could skirt the edge of the water. But in other places the canyon was so narrow that I had to walk right into the water. It was ankle deep. Knee deep. Over the knees. Oh yes, there was thigh deep…water, not mud. This was totally passable! And a grand adventure. We decided to keep going. 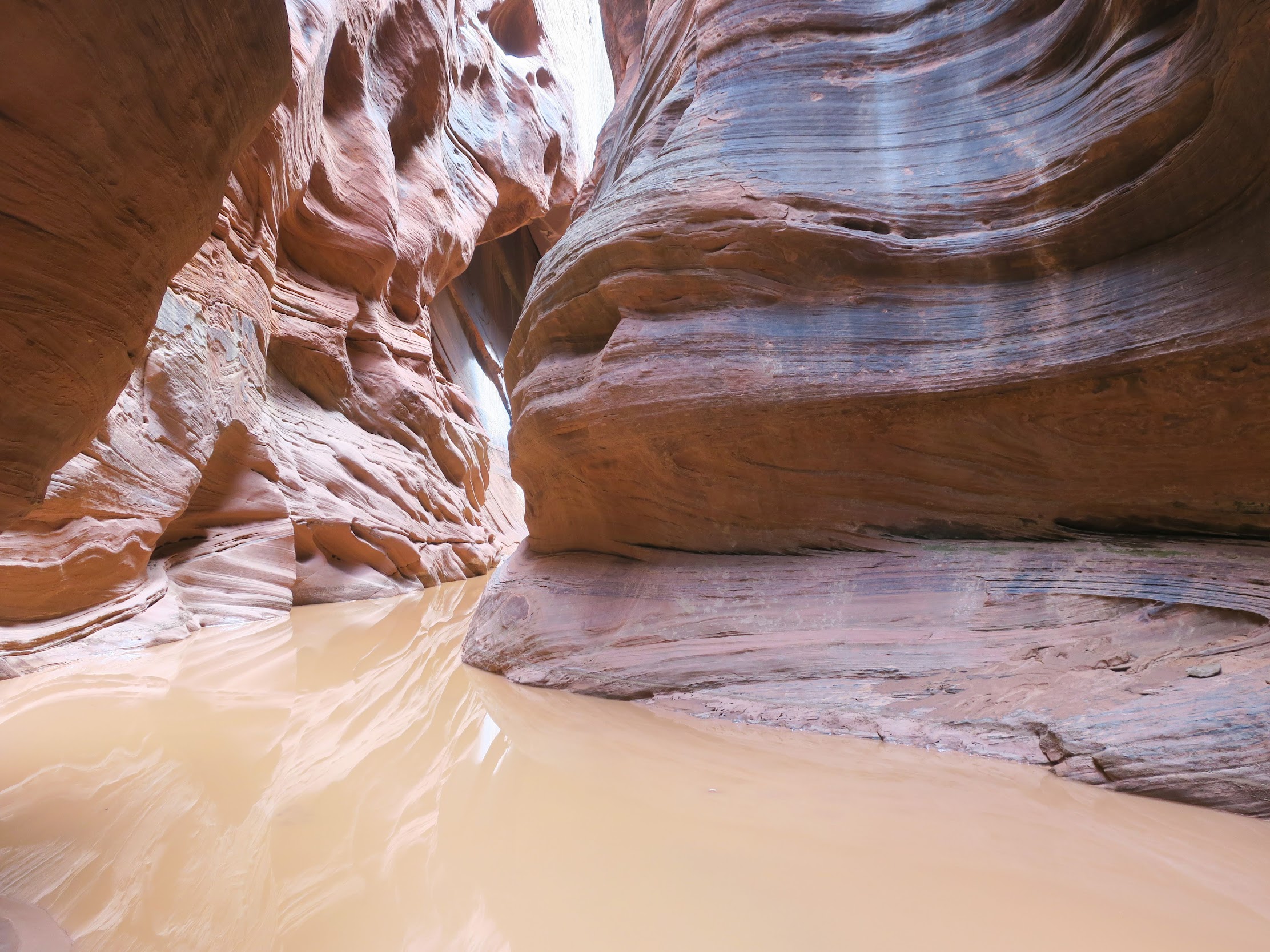 The day went like this: walk a bit on the mud, approach the next pool, gingerly test how deep the pool was, hike up shorts accordingly. Occasionally stop to adjust layers, as in put MORE clothes on. It was damned cold down there, which was especially weird considering it was probably 90 degrees outside the canyon. Little sunlight was able to penetrate the deep and narrow canyon, so it was like we had entered a completely different world.

The interior of the canyon also looked otherworldly. Rocks were eroded in unique shapes and patterns. Flash flooding had created holes, pockets and channels into the stone. The canyon bottom exhibited a wide range of textures, going from fine sand to smooth boulders to sharp pebbles, all in the blink of an eye. The sun, when it reached the canyon floor, created interesting shadows and silhouettes. I stopped to take a picture at least every 3 minutes, thinking, I’ll never see this again!

We were walking through the slot for so long it felt like it would never open up. As soon as we got a small widening in the gulch, we plopped down to have a much-needed snack.

Just a few minutes after we sat down, we heard voices. People?! Who would choose to walk through this water and sludge?

A couple appeared, wearing sandals, tank tops and shorts. They asked “Does this go to the Paria River?” Well yes, I thought, but that’s like 10 miles away. I informed them of this, then turned to reach into my bag for the map. When I turned around, they were already gone, retreating back the way they came. Well, that was odd. Who would have walked this far into a challenging hike with no sense of where they were or where they were going?

We pressed on, again the only people in the canyon. Right around the next corner the canyon opened wide and we felt the warm rays of the sun. Aaaahhh! It was wonderful. 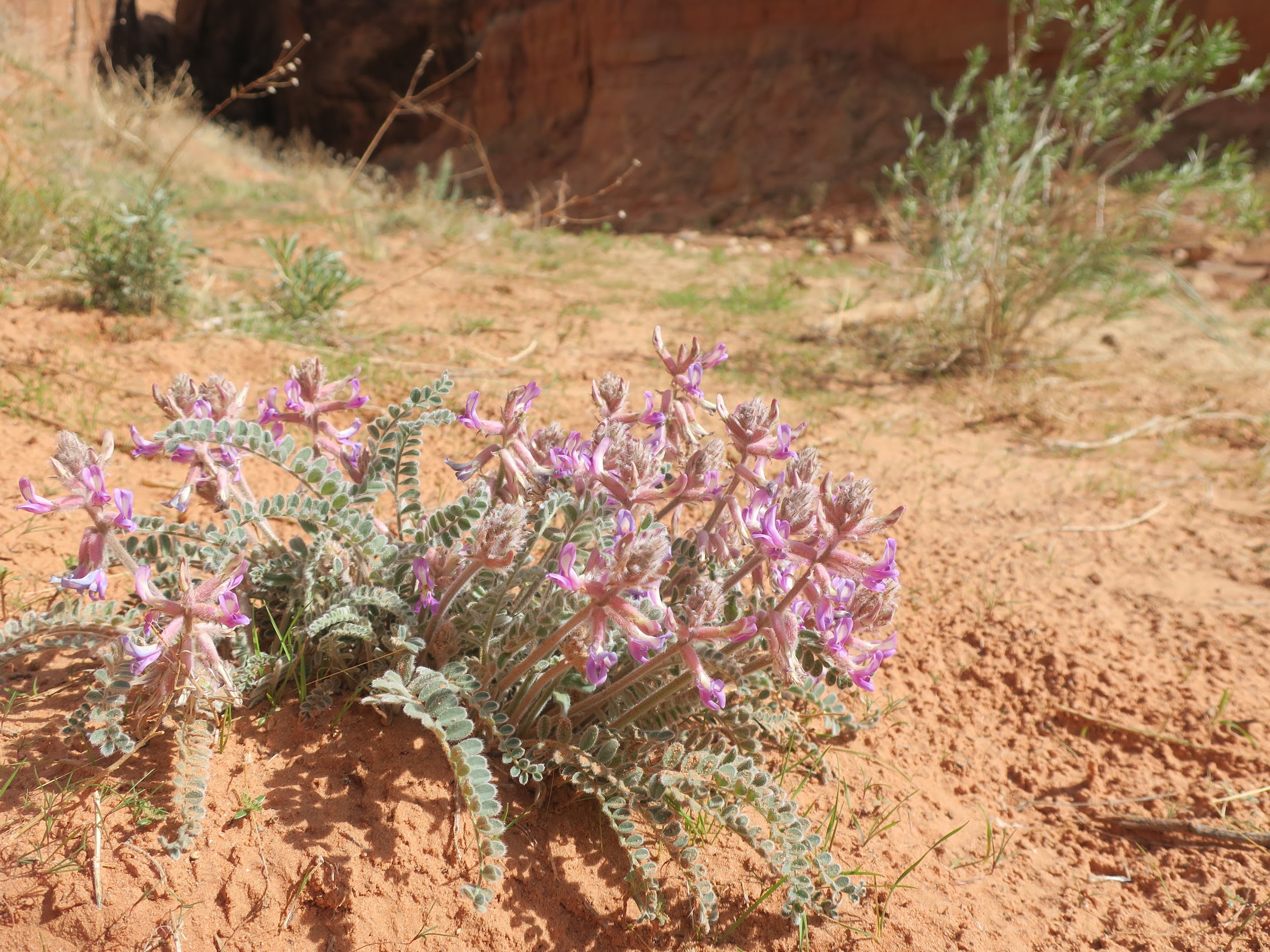 But now we really got a sense of the size of the canyon. The walls to either side of us rose straight up, hundreds of feet. We felt tiny inside of this massive split in the earth. Since the canyon was so wide, it was now easier to avoid the slick mud and deep holes filled with water. It gave us an opportunity to dry our feet out and walk on soft ground. 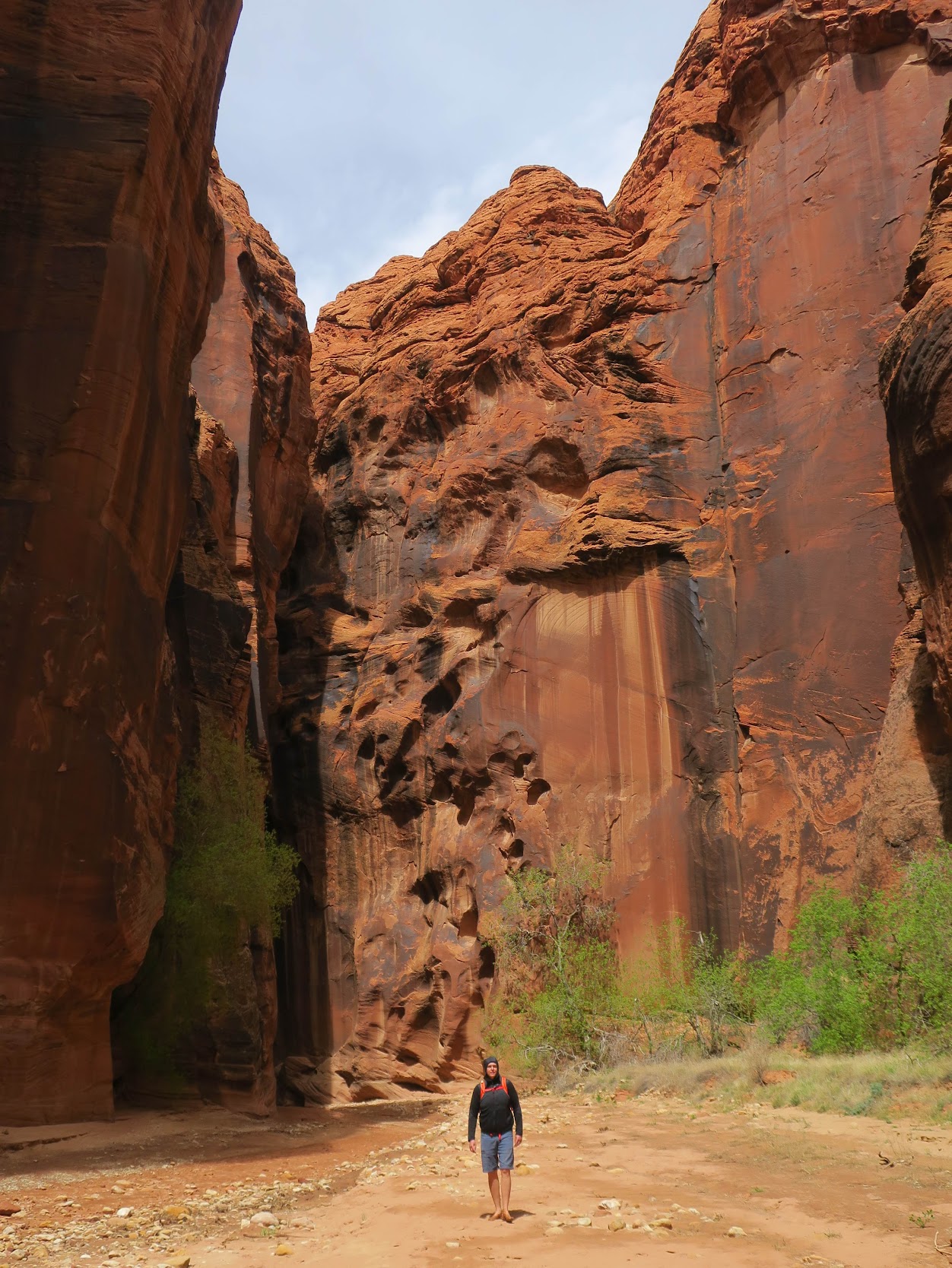 At some point we reached a point in the canyon that was choked with boulders and debris. It wasn’t clear which way was the best way to get around it, so I picked a side and went. There may have been a handful of climbey-type moves on less than stellar rock but we both made it over just fine. And kept walking.

“When should we turn around?” Aaron asked. Oh, do we have to?! We both thought simultaneously. We looked at the time, selected a hard turnaround time and continued on.

I was mesmerized by the experience and already planning a return trip. How cool would it be to backpack the entire Paria Canyon? And I’m not even a backpacker!

At x-o’clock in the afternoon, I don’t remember what time, we decided it was time to turn around. I really didn’t have a sense of how far we had come, since the GPS on my phone was wildly inaccurate inside of a canyon. And while it felt like we had walked 20 miles, in reality we assuredly hiked much less!

On our way back, I stopped to take fewer pictures, but I was no less in awe of the place we were in. Each fold in the rock, each groove in the mud, each bundle of debris and each shadow on the water was a spectacular moment to be cherished. I just didn’t need to capture it on camera. 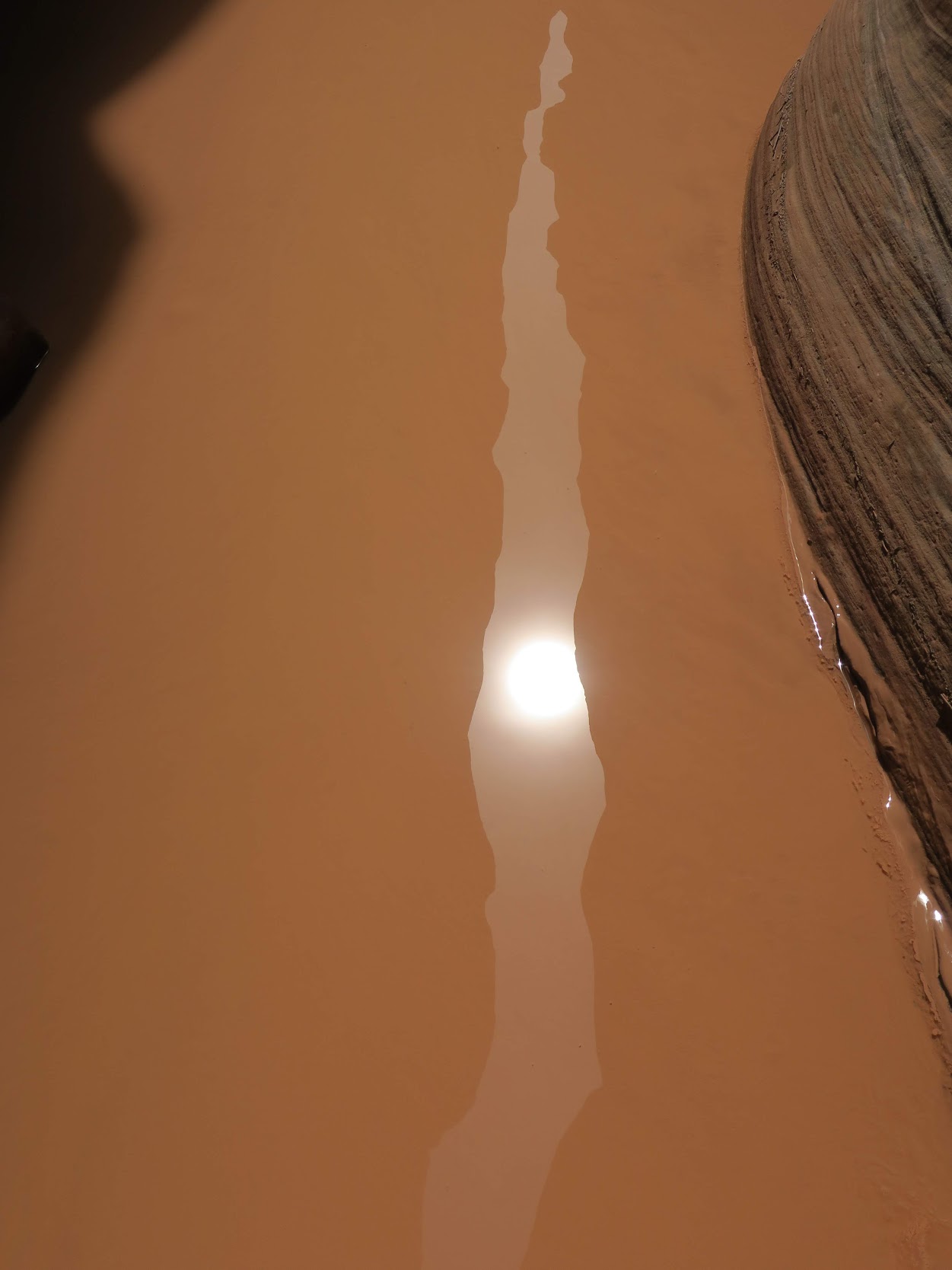 We had almost made it back to Wire Canyon when we began to hear voices again. Another couple was heading our way. We chatted with them a bit, and they seemed excited about their adventure. They knew how late in the day it was and it sounded like they were planning to turn around soon.

After stepping out of that last puddle of water I breathed a sigh of relief. While Aaron washed his feet and put his shoes back on, I found a place to sit just off the trail. OUCH. Every plant in this damn place is covered in spines! I carefully found another seat and savored a few moments of quiet rest. There wasn’t another soul in the canyon.

The rest of the hike was uneventful, but my feet were pretty sore. Every little pebble and sticker sent sharp pains through my body. I put my sandals back on. Feet, you’ve had a long day.

Upon arriving at the car before sunset, I took a moment to reflect on a day well spent. Adventure is there for those who are willing to grab it, and I was grateful to have a partner who put his trust in me to find a new trail and was all in to give it a shot. 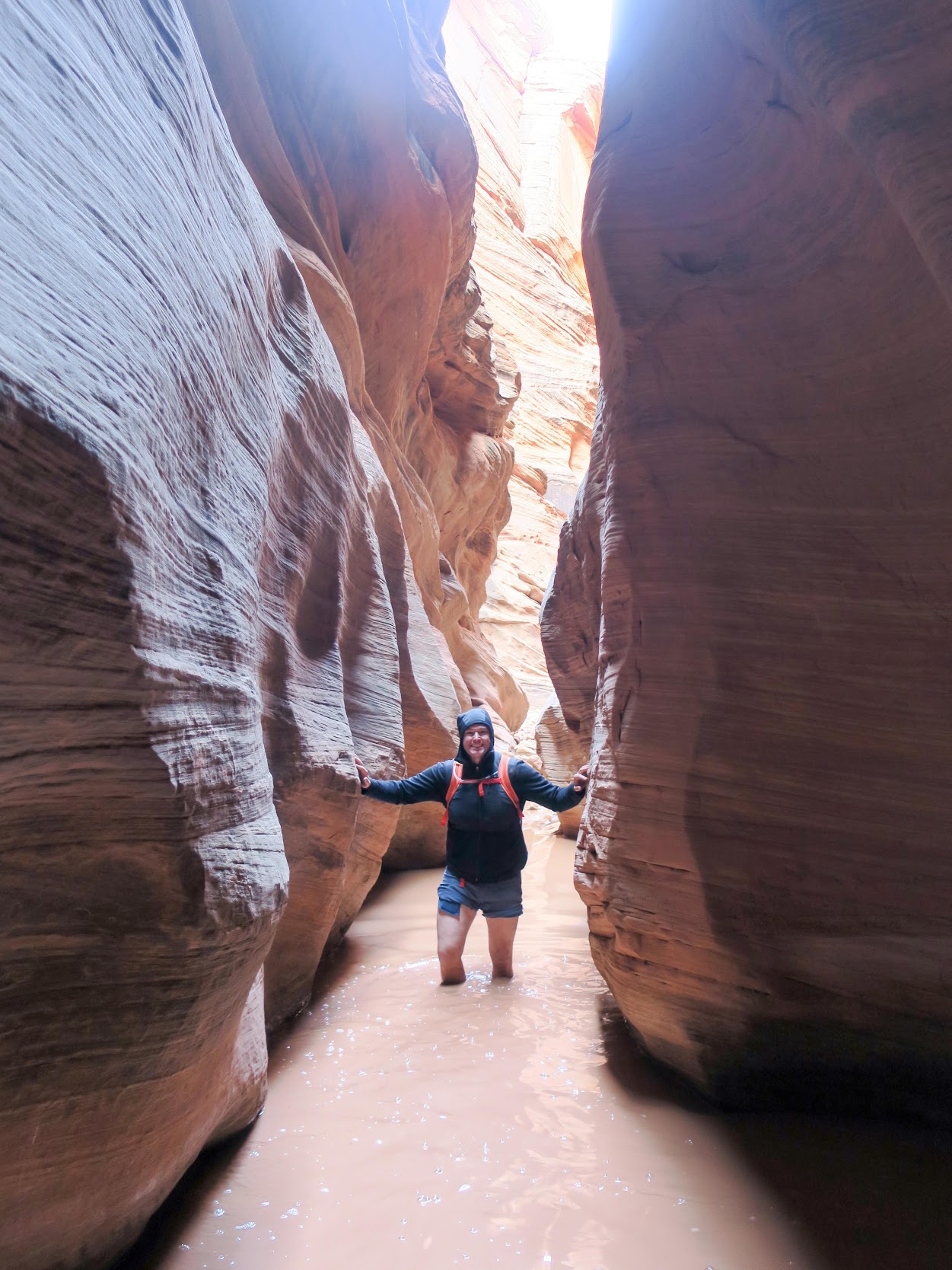