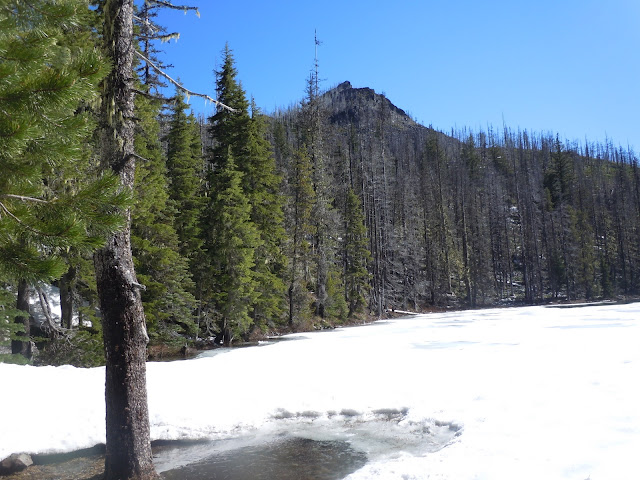 It’s still a little early to be hiking up to high elevations, but riding high after a success on Dome Rock I set my sights on Red Butte. I was happy that the 4000′ trailhead was snow-free, and took it as a good omen. I was surprised to see a car at the trailhead, and assumed someone had camped at Duffy Lake overnight. I quickly covered the bare ground and hit snow less than a mile from the car. There were fresh tracks in the snow, likely from the presumed backpackers. There were two sets of tracks. After a while, animal tracks appeared on top of the human tracks. I never like seeing large, non-human footprints in the snow when I’m hiking alone. At the time I had no idea what the tracks could be, but in hindsight I think they were from a small bear. 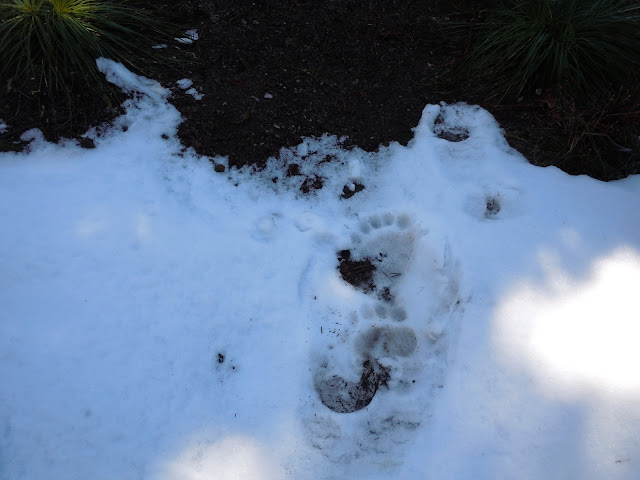 Trying to stay focused, I imagined a pair of mad scientists backpacking with a genetically-modified pet with bear-like paw prints to put my mind at ease.

Once I reached the river crossing, I changed into Crocs and made the exceedingly cold wade. There was a perfectly good, slippery, wet log that the other two hikers obviously used, but I hate walking across wet logs. On the other side, the tracks suddenly became erratic. I became concerned that this would be another dramatic lost hiker scenario. All these flashbacks. I just wanted to go for a hike. I trustingly followed the tracks as they zig-zagged through the trees. At one point it became clear that they had completely lost the trail. I felt like I was walking in circles. I got the book and compass out and tried to make heads or tails out of where I was. I gave it a few more minutes of walking and, lo and behold, I arrived at the lake.

Here, there were outstanding views of Three Fingered Jack. I was almost completely disoriented. I tried to work out the map with the compass and the surrounding features. For a while, I was convinced I was actually at Santiam Lake, not Duffy Lake. Regardless, it was not in my nature to walk to a depression filled with water and call it a day. No, I had to summit something. And there was a big, rocky pile to my left that was calling my name. Later I would deduce that it was Duffy Butte.

I walked along the north shore of the lake on a footpath, hoping to run into the people responsible for making the tracks. The first campsite I found was littered with whole lemons and limes. I dubbed this “Margarita Camp.” Who were these people? What was I in for? Curious, I walked to the next camp, which was occupied with an orange tent but no people. I continued on, secretly hoping for a giant pointer labeled “Red Butte” but I never found one. I did, however, find a whole lot more large animal prints and became wary about crashing through the trees along the lake into the lap of mama bear. I turned around and stopped in a clearing to assess the route possibilities on the aforementioned rock pile. 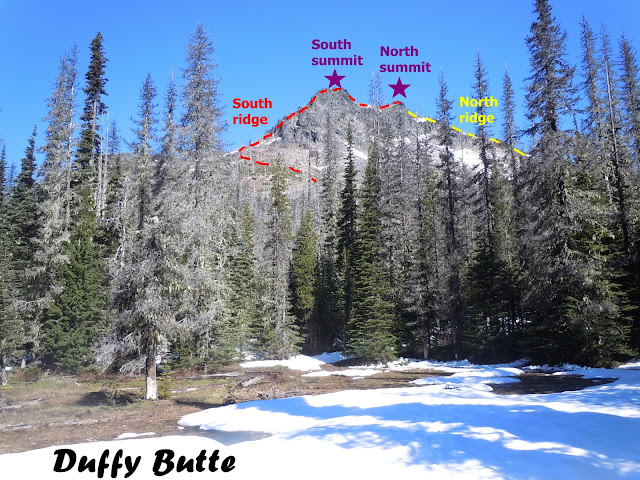 The south ridge looked drier, so that’s where I headed. A short bushwhack through the mostly burned trees brought me to a rubbly scree-field broken up with pockets of vegetation and boulders. Much of the ground was unstable, so I did my best to keep moving forward without doing too much backsliding. From a distance, the rocky ridge looked totally benign, but the closer I got the scarier it looked. Usually, it’s the other way around. I was only psyching myself out, of course. Nothing was harder than the occasional class three move. My greatest concern was the rock quality. At least the other volcanic piles are so well-traveled it’s easy to find a relatively stable route. Up here, I was terrified of pulling down on the wrong rock. 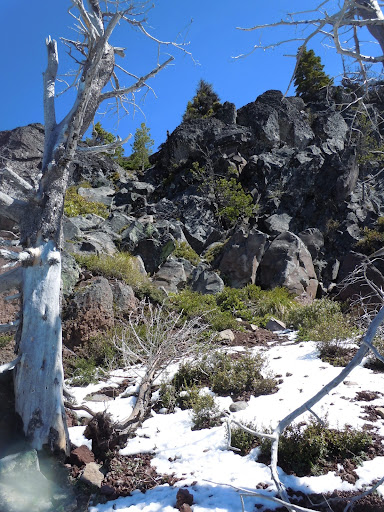 I scrambled up a notch, picking my way along the driest stones I could find. Once on top of the pile I breathed a sigh of relief, looked ahead and saw another rock pile that may or may not have been taller. Damn. Just to be sure I nailed this thing, I traversed the ridge and stopped at the second bump. Surely one of the two was the true summit. At about an hour’s walk from the lake I’m surprised this one doesn’t get done more often. Here I had my amazing dry bread and cheese lunch and made an attempt to dry out my socks. The views were breathtaking: Hood and Jefferson to the north, and all the central Oregon cascades to the south. The burned areas seen from here were extensive. And, of course, I was all alone up here, yippee!! 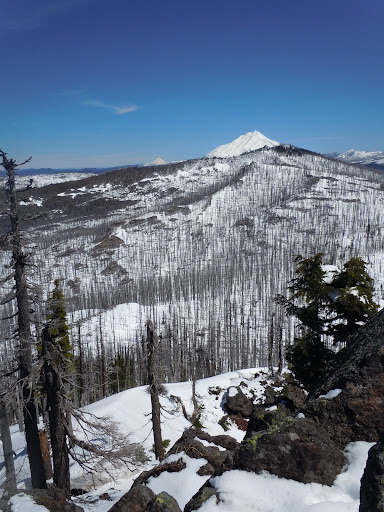 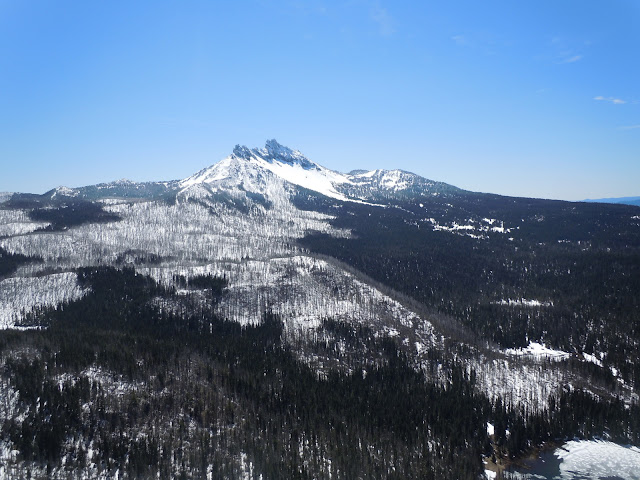 Looking over Mowich Lake to Red Butte I decided I would end my day here. It appeared to be another couple of miles slogging through the forest to get to a ho-hum, round bump in the terrain. Duffy was far more interesting and I got the same views anyways. For one last little adventure, I took a different route back. Since my socks were still wet anyways, I decided to descend the snowy north ridge. Now my concern shifted to tree wells. My concern was unfounded, however, as I made it back to the lake, with no issues, in thirty minutes.

I took a bunch of pictures as I ambled along the lake, since the views of Three Fingered Jack just couldn’t be beat. Where the lake met the confused footprint trail I ran into the two backpackers I’d anticipated seeing earlier in the day. We chatted, and we all ended up walking out together as one of them got some GPS navigation practice. We noticed some new animal tracks on the way out, something feline.

I’m not sure how this ended up being a 7 hour day. I definitely lost some time with the navigation on the way to the lake and then I stopped for a while there to figure out what to do. I suppose the hour long rest on the summit ate up some time as well.

Success? Failure? I’d say any day spent in the woods is an overwhelming success. Although I did not arrive at the intended destination, I got what I wanted: seeing a new place, reaching a summit, solitude in the forest, exercise, and a moderate challenge. Now I anticipate the next adventure, a week of rock climbing and hiking in Idaho!

The entire photoset is online!