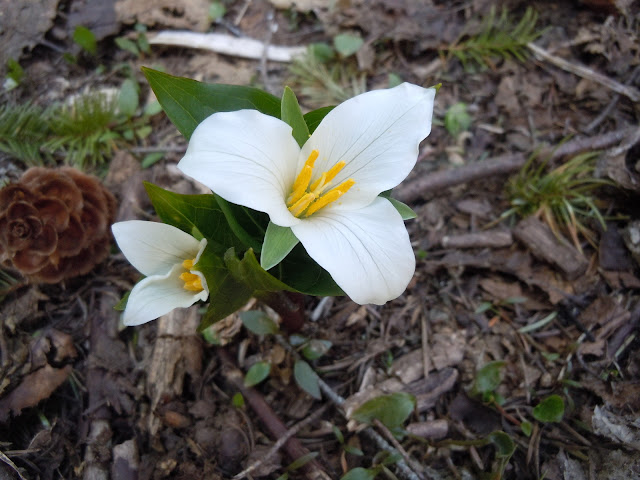 I needed a win. My past two hike attempts had been thwarted by snow before making the summit. Yesterday I ended up on Whetstone Mountain’s ridgeline, surrounded by trees and mired in wet, sloppy snow. Today I knew I’d hit snow again but I had hoped for some kind of miracle.

On a whim, I decided to make an attempt at Dome Rock from the Tumble Ridge trailhead. I’d spent the last night camped near the Opal Creek Wilderness so it wasn’t too far of a drive.

The first bit of the hike follows an old road, then the trail begins in a hurry as it hurtles uphill to the right. Soon it became a rather typical Cascades trail, traveling in sections of long, straight lines capped with hairpin switchbacks. The forest was bone dry and the understory was full of the usual suspects: salal, trillium, rhododendron and various types of ferns. A couple of hours into my hike, I entered a brushy clearing that was mostly covered with snow. I didn’t realize what I was walking on top of until I crashed thigh deep into it, slicing my knee open pretty good as my leg grated against the hard-packed ice. Oops…the trees I’d been walking among were blown down in spots, forming a tenuous bottom layer that the snow draped across. I crawled out of the hole, took two steps and plunged in with the other leg. Gaahh! Not smart. I carefully leapt out of the snow into the mud, where I could tend to my wounds and get my snowshoes on. 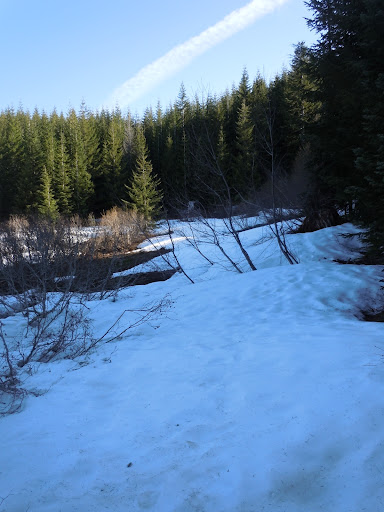 Not 15 steps later I found the other end of the trail as it exited the snowfield and entered the (dry) woods. Stubbornly, I kept my snowshoes on as I crossed the dirt trail and the occasional patch of snow. I was surprised to come across a trail sign at what appeared to be a crossing of an old road. The sign said Rt 22 4 1/2 miles. Funny, according to the Sullivan book (my only map and route description) I should have crossed a road already. I had it in my head that at 4.5 miles I’d be at the Dome Rock junction and I would have to go right. I stopped and tried to align the terrain I was standing in with the book and my interpretation of the book. I couldn’t figure out for the life of me where I was. And since this was a last-minute hike decision I had no real topographical map of the area.

There were footsteps leading along the road to my right so I headed that way. I followed the road for awhile until I decided that it was definitely not the right way. I turned back and stopped again at the junction. Maybe I’d go left this time. I walked towards a prominent snow slope, gleaming in the hot morning sun. Quickly tiring of the road walk I assumed the slope led up to my destination so I made random switchbacks to gain elevation and hope for a view. As I climbed I felt less and less certain that I was on the right track but I pressed on anyways. After some struggle I made it up to a snow-covered clearing and dropped my pack. I sent a SPOT OK signal so I could check it out on the map when I got home. I don’t travel with a GPS. 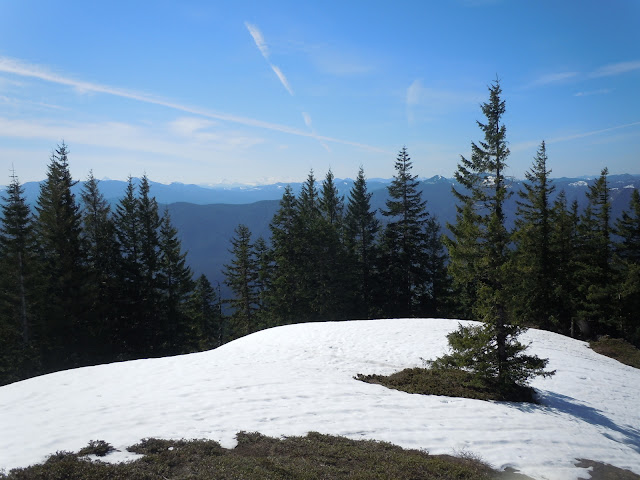 At this point I’d all but given up on this hike. I sat and ate my summit brownie that had sat stashed in my pack since yesterday morning. Sigh. I enjoyed a bit of shade and the occasional brush of wind as I pondered my situation. I noticed at the edge of my peripheral vision a rocky, nearby peak that may have been my destination. As I fixated on this peak I tried to convince myself that it was too far away and there’s no way I could get there through the trees. I packed up and retraced my steps a bit until I stumbled across a sign of the trail. Walking along the now seemingly obvious trail I popped out onto the road at the 4 1/2 mile sign in no time at all. Utterly confused, I dropped my pack again and started rebuilding a 3-D topographical model of the surrounding area in my head. I could not resolve incongruency between the the book, the sign, and the land I was physically standing on. Some piece of information was wrong, and I knew the ground beneath my feet was the only thing guaranteed to be right. I took some deep breaths, chose a strategy to stay found, and gave it one more shot. 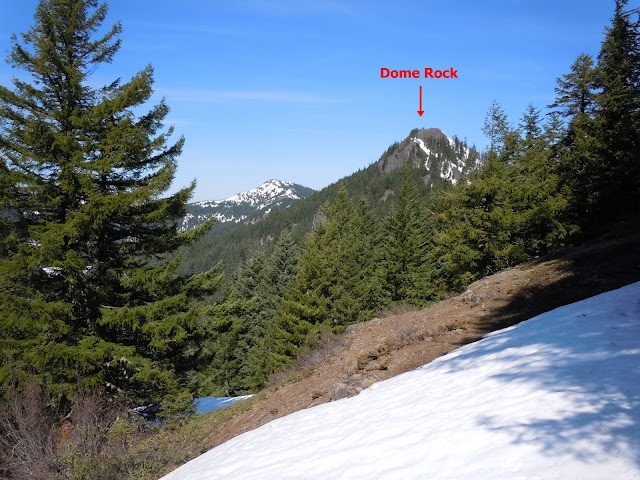 I knew that I tend to grossly overestimate how far and how long I walk when I’m “lost” and not looking at a clock. I then adopted a strategy to take pictures of certain features so I would have an objective measure of time. Fortunately I started my hike at 7 am so I had lots of time to meander through the woods. I followed the trail up to the last spot that I knew for a fact I was on the trail. Then, I stopped to take my time-stamped picture and think rationally.

Originally I had been thrashing around in snowshoes because I thought they would provide some flotation and support on the snow. However, the slushiness of the snow combined with the constant sidehilling made the snowshoes a hazard. I left them on my pack this time. This would also ensure that I would not mix up my old tracks with my new ones. Besides, the deep footprints were much easier to see in the snow so I could leave a breadcrumb trail to follow on the way back.

I noticed that occasionally, trees along the trail would have a small rectangle of pink paint adorning their bark. This, combined with some random pink or yellow flagging and the usual signature tree cuts, provided enough evidence to piece together the trail bit by bit. It was slow going and methodical, but I finally felt like I was progressing, and I no longer felt the anxiety of being lost.

When I reached tricky spots where I thought I’d have difficulty seeing the trail upon my return, I dug my heel into the snow to carve big arrows pointing back the way I came. 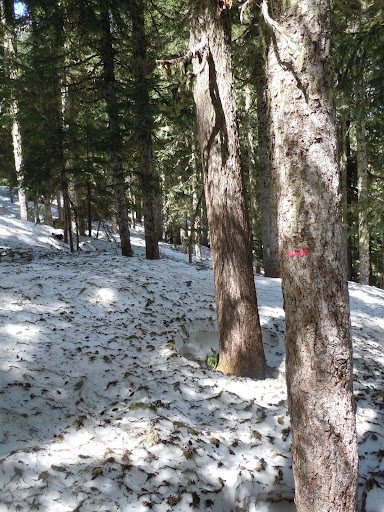 At last I reached a sign marked “Dome Rock.” The carved letters were so weathered that the sign was barely legible. The tree had grown over the entire upper lip of the sign. Now there was only half a mile to go, in some direction. Again I carefully observed my surroundings. Soft, relaxed eyes seemed to do the best job. I spied the spur trail and a bit of pink tape just to the right of the main route. Walking uphill I saw what appeared to be a well-defined ridge with nothing but blue sky beyond. I was lured up to the ridge, where I caught a view of the summit pinnacle. From here it looked like a straightforward walk up to the summit rock formations. Sweet! I bobbed in between the trees along the ridge after deciding the unpredictable cliff-top cornices were too dicey for me. Once I saw a vertical rock wall ahead of me and an obvious ramp to my right I knew I was back on the trail. Switchbacking up the rock the anticipation built up inside of me like a popcorn kernel ready to explode. I flew up one last, steep snow slope and crested the rocky top only to be blown away with a spectacular 360° view. 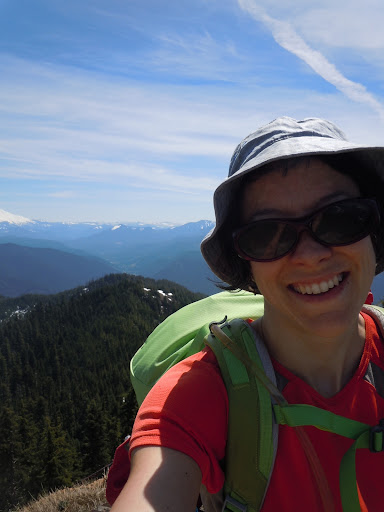 Expletives filled the air uncontrollably. Inappropriate, maybe, but since I was the only one for miles and miles it did not matter. Oh, I was so thrilled to finally get the view I’d worked so hard to attain! Nothing could sap the joy of this moment. I tossed down my poles and pack, found a comfortable seat and tore off my soaking wet socks and shoes. I spent the next hour resting in this former lookout sight, imagining the rugged building that once stood here, and marveling at the rare perspective this location offered on the central Cascades. 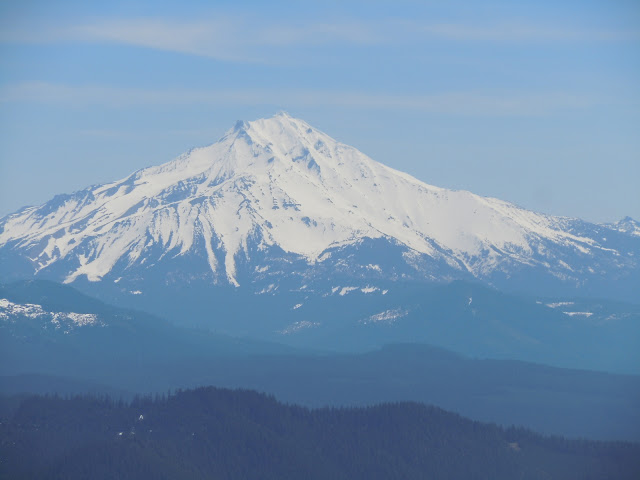 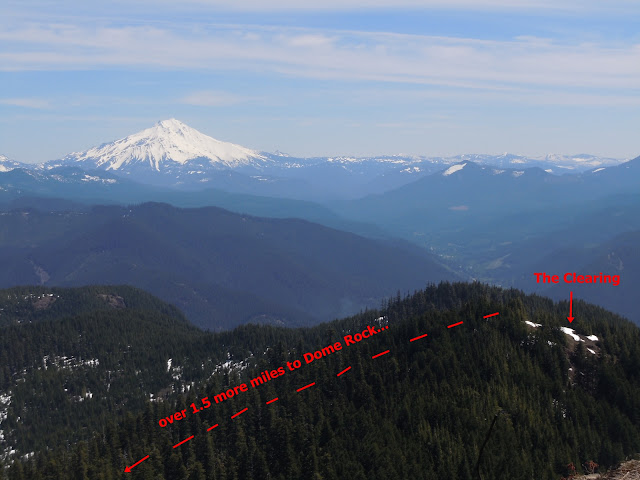 It was nice to have dry feet for a little while, but inevitably the wet socks and shoes had to go back on. I begrudgingly abandoned my treasure of a view and retraced my tracks through the snow to the Dome Peak trail junction. Before leaving the summit I packed my half-liter Nalgene with snow to make a weak Gatorade slushie. Yummm. I knew it would be a terribly hot walk downhill. Portland was supposed to hit 90° today, and even at nearly 5000 feet of elevation I could feel the summer-like heat.

From here the trail seemed much easier to follow, perhaps because I’d become familiar with the terrain or perhaps because I had a much more relaxed and positive attitude. I’m not going to lie, it could also have been related to the flagging, paint, footprints and snow arrows. 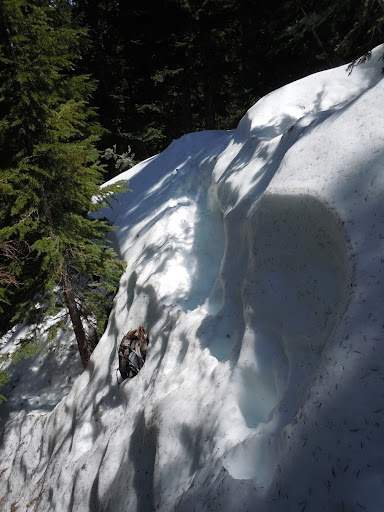 Once I was almost back to the junction of mass confusion I checked on my water supply. My giant Camelback was almost empty. I packed that with snow as well, being careful to fish out the pine needles, and went on my way. I discovered that blowing the water out of the Camelback tube can be just as important on a hot day as on a cold day; each sip of fresh water was ICE cold and immensely refreshing. With exceptionally high morale I floated down the trail on light feet, all the way back to the road that I started on many, many hours ago. I looked forward to reaching the road because a giant creek was flowing right beside it.

Just before getting to the car I dipped off the road, stashed my gear and doused myself with ice cold creek water. That was the cherry on top of this hike. And, did I mention I did not see a single person all day. GRAND SLAM! 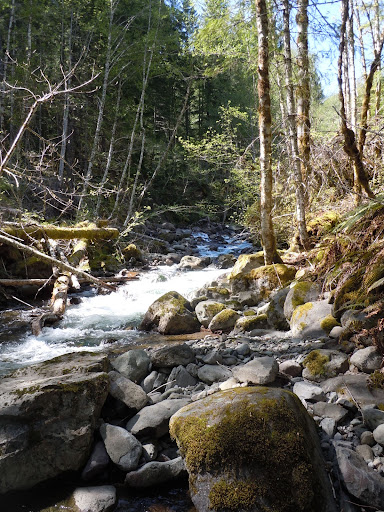 Who would have thought that this simple 10 mile walk would have brought such adventure and excitement? I truly enjoyed this hike. Well, not every moment of this hike was wondrous, but in the grand scheme of things this will be a hike to remember. I’d imagine even a mundane mid-summer trip up this trail would be magical as well since the trail is pleasant and the view is postcard-perfect.