Hunchback Mountain Trail > up, down, up, down…repeat 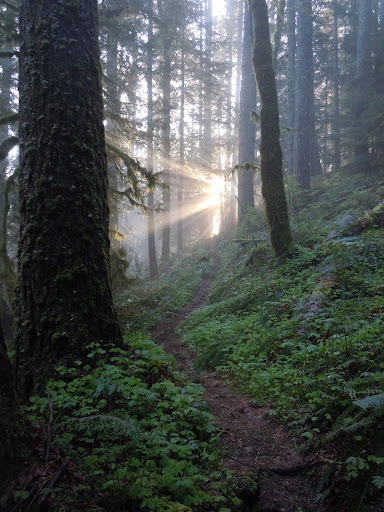 I’d earned a nice long walk in the woods after having a productive grading session on Saturday, so I chose an ambitious route to Devil’s Peak via the Hunchback trail. Sources estimated the mileage to be about 18 miles and over 6000′ of elevation gain. I wasn’t sure what the trail conditions would be like, so I packed snowshoes and a good amount of water and got an early start.

The Hunchback Mountain Trail was no joke: sections varied from very steep to ominously flat and very steep again. There were lots of ups and downs, which was nice for me because it required the down muscles to jump in and do the job when my up muscles got worn out. The trail was mostly in the woods, with a few mediocre viewpoints. The air was surprisingly cold for the forecast, and I’d wished I would have brought some warm gloves with me. 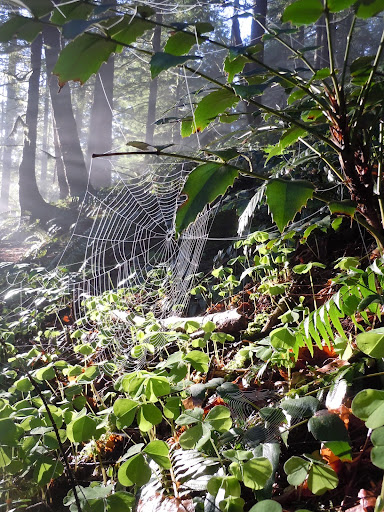 Within a couple of miles, I began seeing patches of snow on the trail and before long, the ground was completely covered. I got flashbacks of my last trek in the woods and felt prepared since I brought my snowshoes! The snow never ended up getting very deep, but it was wet and soon my Gore-tex shoes were saturated. As the sun rose higher, snow bombs dropped from the trees. I found my sun hat worked nicely; it deflected the bombs from sliding down my shirt or beneath my glasses.

I walked along in quiet solitude, following the occasional bit of pink tape, dreaming up a story to explain the snowshoe tracks in front of me. Someone had been up here recently; probably yesterday. The tracks all pointed uphill so I’d guessed a solo backpacker had come up to camp for the night. I imagined I’d run into the tracks’ owner once I got higher. A male, most likely. I’d figured between the ages of 35-55, in pretty good shape for hoofing it up here alone. I couldn’t explain why this person had worn snowshoes in what couldn’t have been more than an inch or two of snow underfoot. As the miles passed, the story in my head became more filled in with detail. 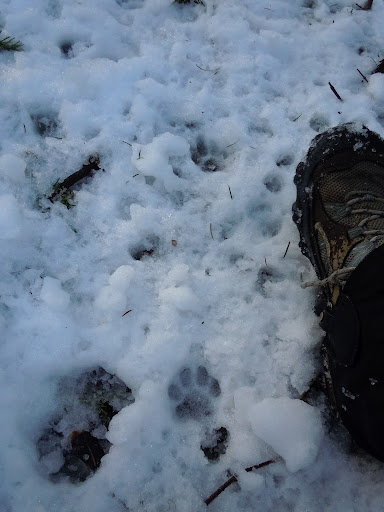 As I entered a small, open meadow, the tracks suddenly left the trail and headed to my left. Weird. I continued along, thinking that this must be near the person’s campsite. But soon, I came across snowshoe tracks facing in the opposite direction. Hmmm…

Cruising along, I revised the story unfolding in my head. My eyes glanced up from the ground and fixed upon a figure. It was a man in his late twenties, standing just ahead on the trail, eyes open wide. I said hi, smiled, and he shouted “Oh My God! I’m lost! Can you help me?”

Bewildered, I thought for a minute that he must be joking. Great, all the times I harass people about giving me a hard time about hiking alone and here I am, face-to-face with the one in a billion chance of running into a psychopath in the woods. Surely it doesn’t go down like this.

But the fear in his eyes and in his voice assured me that this poor guy was truly disoriented and in need of help. I calmly asked him some questions and pieced together the real story. He had hiked up Saturday with plans to stay at the Devil’s Peak fire tower. He got confused in the meadow and lost his way trying to find the tower. Fortunately, he had a tent (and about 30 pounds of extra gear) so he tent-camped overnight. This morning, he had been walking in circles for hours and had recently texted his girlfriend that he needed help. She had contacted search and rescue.

Yikes. I made sure he was set on food and water. He wasn’t injured, and appeared to be capable of walking back out to the ranger station, where we had both started our respective journeys. I accompanied him back down the trail about 5-10 minutes, past the meadow of confusion, to the point where both our tracks overlapped. I said goodbye when we were both comfortable that he could make it back safely, then I turned around and continued towards Devil’s Peak. 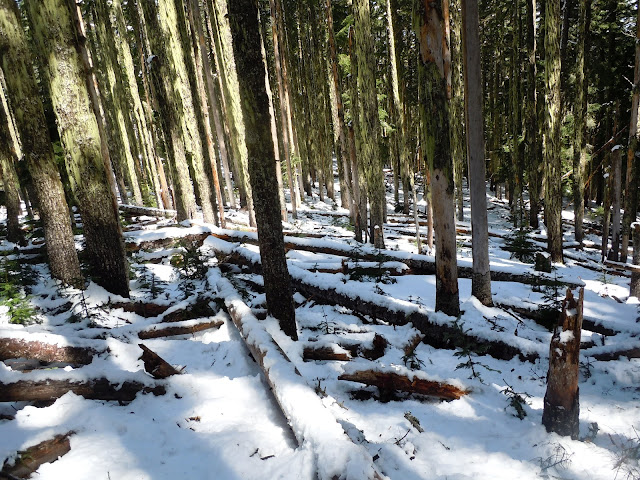 I couldn’t get the look on his face out of my mind. Before we parted ways, he gave me his girlfriend’s number to call to let her know he was okay. There was no signal in the forest but up at Devil’s Peak, we thought I’d be able to send a text. I did my best to ignore the labyrinth of snowshoe tracks and stay right on the trail. It became more difficult to navigate as the snow got slightly deeper. I lost the trail in a moderately sloping hill littered with blowdown so I bushwhacked up to a high point where I was sure I’d be able to get a better perspective. No luck. I wandered back into the woods, crossed a stream, meandered across another side slope leading to the ridge and was foiled again. At least this time I reached an open area with a phenomenal four-volcano view, cell signal, and a peek at Devil’s Peak. I decided to call it a day and unpacked my lunch.

I texted the number in my phone and within two minutes I received a call from the sheriff. A SAR team had been mobilized and they were waiting in the parking lot for the lost hiker. I gave them as much information as I could, then began to doubt my decision to leave him behind. 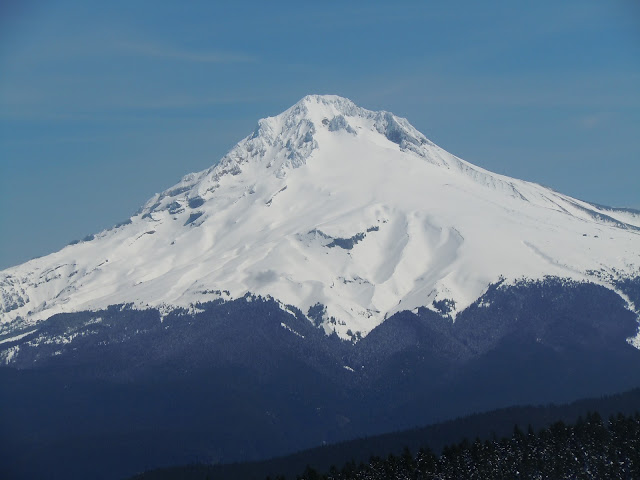 I begrudgingly said goodbye to the only nice view of the day and to Devil’s Peak, which lay probably less than a half mile away (plus a huge drop and re-gain in elevation). I carefully made my way back to the trail, fearing that I’d get myself lost. The snow bomb landing areas looked an awful lot like footprints, making it difficult to simply retrace my steps. I breathed a sigh of relief when I found the meadow and then booked it down the trail in hopes of catching up with the other hiker as soon as possible.

The snow made quick and efficient movement easy in some areas and challenging in others. The hill climbing back up to the Great Pyramid Junction felt agonizing. At the top of the hill I ran into two other hikers, taking a break at their turnaround point for the day. We shared some information about the situation and I was glad to hear that the hiker was still trucking along safely. On the way out I passed two other groups of hikers who also reported that he was moving along. 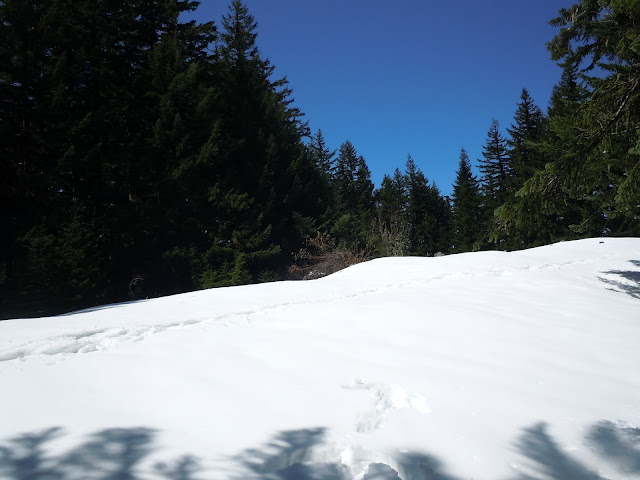 Now practically at a run I raced down the flat portions of trail and stepped carefully over the steep, muddy slopes. At about 2 miles from the trail head I crossed paths with my friend and was happy to see him walking and in relatively good spirits. We chatted for just a short time before running into the SAR team, taking a rest on the trail.

The 6 members of the SAR team offered him food and water, took his pack, and had him sit down on a foam pad to rest. We all took a breather and talked for awhile as they radioed back to base and got ready to haul back downhill. With just about 1.7 miles to go there was still a significant amount of elevation to lose. They were all carrying overnight packs to be prepared for any situation.

We both walked out with the SAR team, which moved VERY slowly and methodically. Walking that slowly made the steep downhill feel like nothing 🙂 So this is how out-of-shape people do this, I thought… 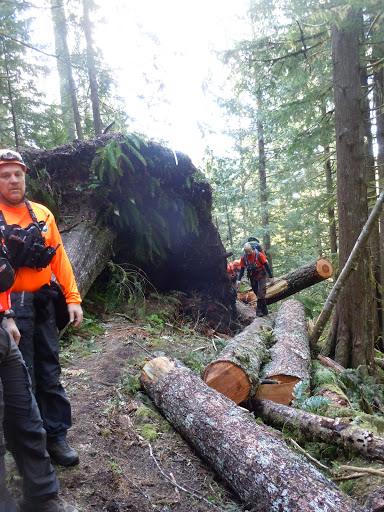 We arrived at the parking lot around 4:30 pm, and I was relieved to be back at the car. It was quite a surreal day. I am sure that if I hadn’t randomly been up there that this man would likely have spent another night camping since it would have taken the SAR team several more hours to hoof it up to where I found him. I am glad that I was at the right place at the right time.

What lessons can be learned? I think the hiker did some things right and some things wrong. He did realize the gravity of his situation and called for help once he thought he was unable to rectify the problem on his own. He did not stray too far from the existing trail, and he was ON the trail when I found him. He was just so mentally out of it that he didn’t know where he was.

What decisions could have been different? For starters, he appeared to be inexperienced at backcountry travel, especially alone. I think he could have picked a shorter and more obvious goal for a solo overnight trip. Secondly, at the first sign of losing the trail he could have stopped and reassessed his objective. He didn’t have a GPS and I am not sure if he had a map. Since he was prepared for overnight tent camping, he could have set up camp and done a quick search for the trail to Devil’s Peak in the morning, with more sunlight and more energetic legs. Third, keeping your head is so important in these situations. He was not mentally there when I found him. He was likely dehydrated and not eating enough food. He was tired, stressed, and out of sorts. After initiating SAR he might have hunkered down in a sunny spot and relaxed, took his pack off, melted some snow, and let his brain re-focus.

I am so glad there’s a happy ending to this story. Devil’s Peak, I’ll get you next time.