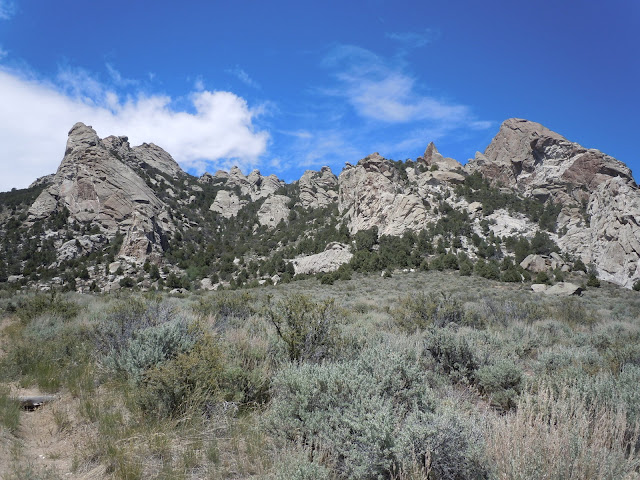 I needed a Jess day. I had been climbing in the park for 5 days and I just wanted to go for a walk. Bingham’s City of Rocks climbing guide book included some hike suggestions in the introduction. The Granite Mountain ridgewalk appealed to me most, and I’d been ogling the distant skyline since I arrived at camp. There would be some bushwhacking involved, but I was sure the wide open views would make that easy enough to manage. 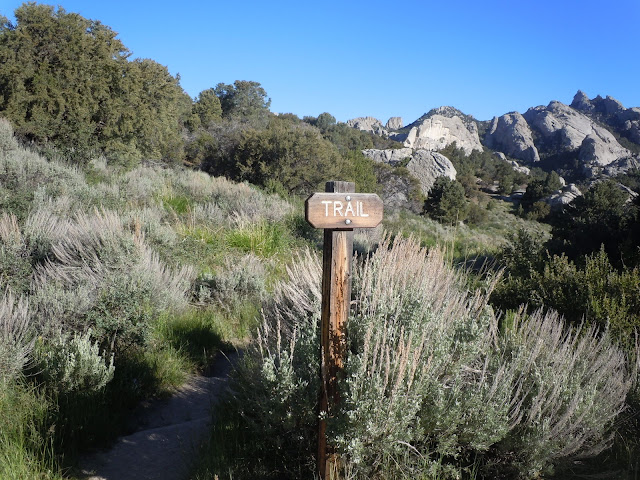 I set out from our campsite, adjacent to the Flaming Rock trailhead, around 8:30 in the morning. It was already warm and I knew it would be a hot day. I covered the trails quickly, stopping to photograph the pretty wildflowers and stay hydrated. When I arrived at a sign pointing to Beef Jello/Banana Crag, I knew I’d be saying adieu to trails for a while. I stayed on the climber’s path as long as it lasted, then followed a faint trail through the forest. Even though it angled northwest (instead of northeast, towards the ridge), I patiently followed the path. Eventually I figured I was heading too far west and picked through the forest. Soon after I came across a well-worn trail that was too good to be true. I had no idea how popular this hike was, so again I put my faith in this trail. It became obvious that it was taking me to another pass leading to a totally different part of the park. I got out my compass, scoured my surroundings for a break in the trees, and changed my direction.

I know I’ve learned my “no bushwhacking in shorts” lesson before, but for some odd reason I thought the desert would be kinder to my legs. This was not the case. Although the area reported an average of 12 inches of rain each year, the understory was remarkably dense. Every leaf, branch, thorn and bristle was razor sharp. Branches grew in tangled mats that were hard to avoid or brush out of the way. I knew I’d be donating a lot of blood today. 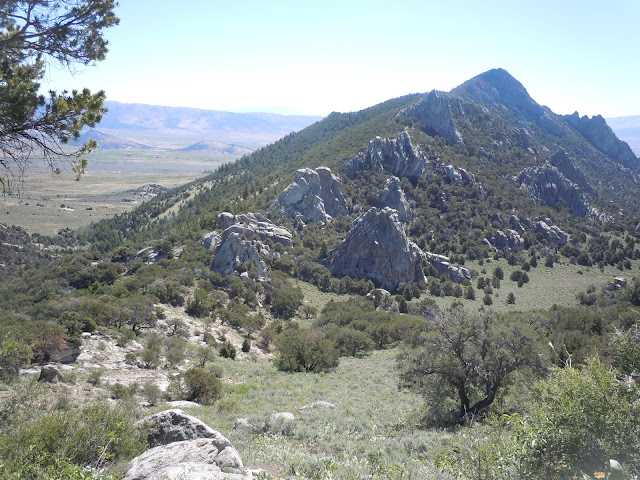 As I meandered along the ill-defined ridge, I savored the views south to the inner workings of the park and north to Graham Peak. My path alternated between navigating through the brushy forest and working my way up to rocky viewpoints. I did not feel like I was doing a ridge walk. Every pile of rocks I scrambled up on top just gave me a great view of how much elevation I’d have to lose to get to the next saddle. It was smarter to stay low and avoid the only enjoyable part of the walk. It was miserable. And now it was very hot. 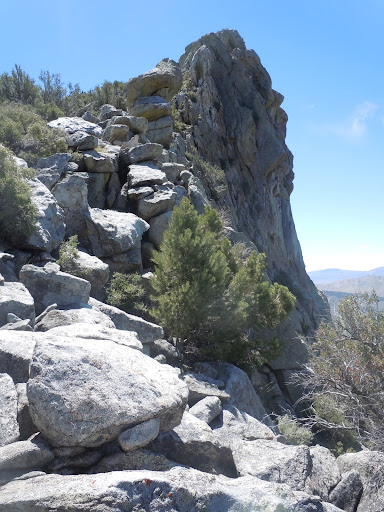 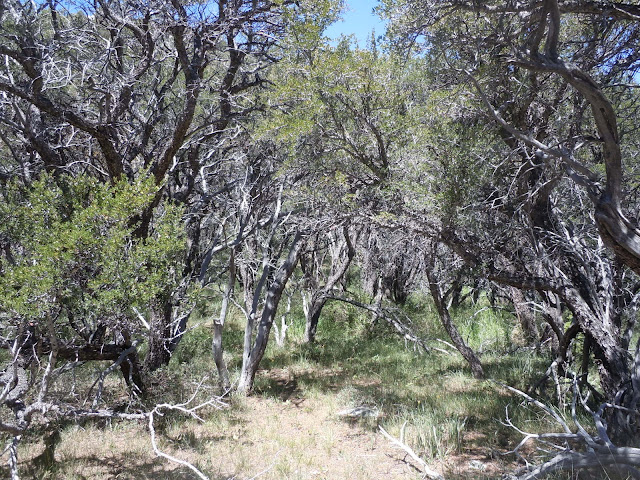 At some point, I distinctly remember feeling close to the summit block of this beast. I also remember feeling even more closed in by dense trees, crumbly rock, and shrubs. Ugh. I trudged on at a snail’s pace, snapping all the face-high branches and ducking below the limbs that were too big. I’d climb up on some rocks that would dead end, then drop back into the unruly orchard from hell. This happened to me several times before I finally came to the summit block. 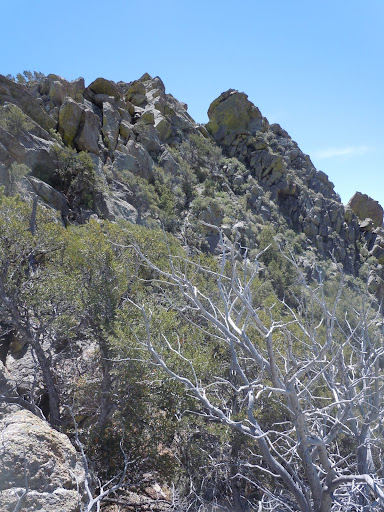 So I thought. I got to the top of this thing, and there was a large gap between the pile I was on and the true summit. Crap. I downclimbed to a few other points that left me with some very exposed 4th class scrambling to get just another 15-20 vertical feet to the top. Alone, this was not happening. The slab on the north side leading to the summmit looked promising, 5.0 or just a bit more, but it was really long and also exposed. A fall would certainly leave me dead at the bottom of the face. No thanks. Frustrated, but accepting of my non-summit, I ambled off to a flat and windy lunch spot where I sat and rested, drank lemonade, and ate lots of food. 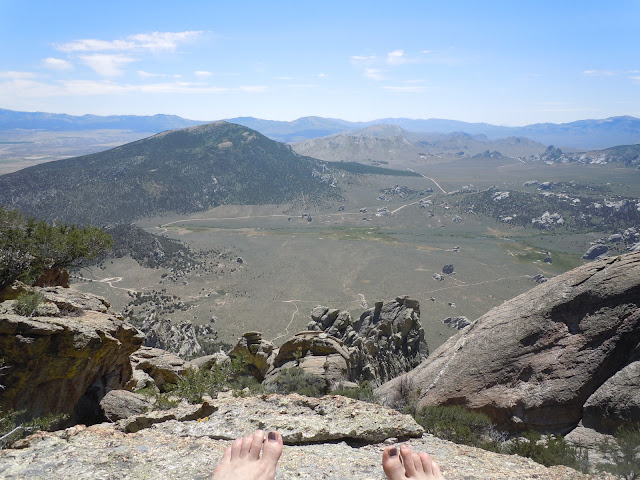 The guidebook suggested finishing the ridge by descending Granite Mountain’s summit and walking around the north side of Stinefell’s Dome to connect with the climbing trail that led back down to the valley. I had scoped out this descent just a couple of days earlier so I knew the way. But I was SO done with bushwhacking that I wanted to get to open sagebrush country as quickly as possible. I began to follow the ridge east until I found an obvious gully leading downhill. I thrashed my way through the gully, which had some nice open areas and some really tight spots, until I popped out right onto a trail. Hoorah!

The sun was brutally hot here, with little breeze and no shade for miles. I didn’t care. I needed time to lick my wounds. Walking was incredibly easy now; I could let my brain and body run on autopilot for a while. Wanting to make a loop out of the whole ordeal, I chose different trails for the return trip for a change of scenery. I enjoyed looking at the cactus blooms the most, and was excited to find a rock that looked like a giant chickadee. 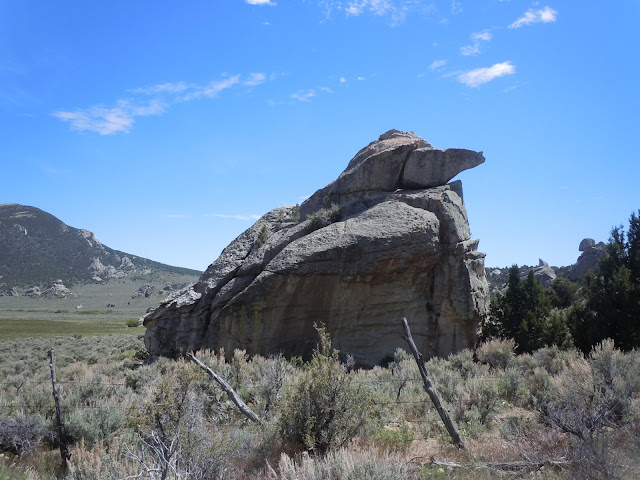 I kept an eye on my water supply, which was running low. I was overheating big time. Just about a mile from the trailhead, I plopped on the ground under a shade tree and recovered a bit before the last uphill stretch back to camp. There were lots of ups and downs on this trip, which was very tiring.

Stepping into camp marked the end of a long day. I was happy to take off my socks and shoes, scrub up with some soap and water, do crossword puzzles and watch birds fly among the trees. I wouldn’t exactly recommend this hike to anyone, for any reason, unless perhaps the entire ridge is covered with 20 feet of snow. Live and learn. The trails were great, but trekking off trail required some serious willpower. Next time, Granite Mountain, I’ll take the short way up and bring a partner with a rope. 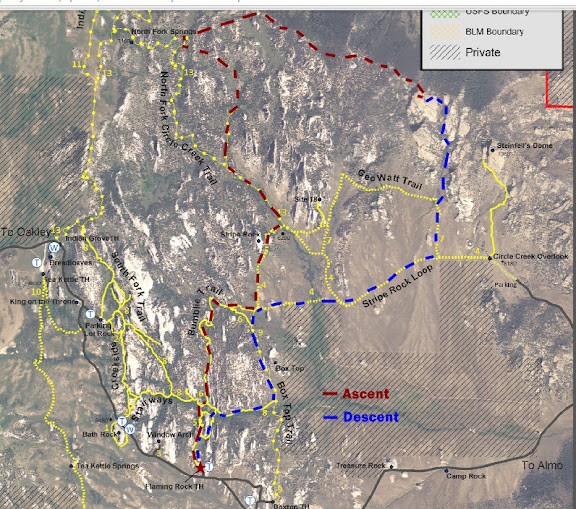