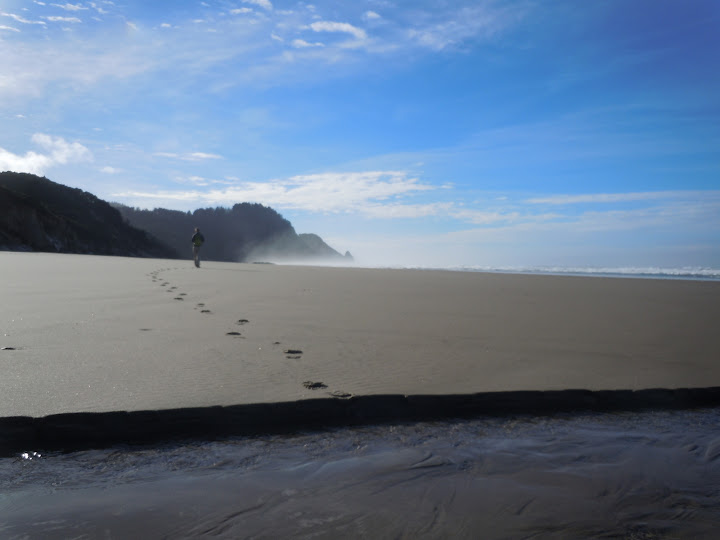 See all the photos and video here.

The Road to Hell is Paved with Good Intentions

My friend Sue and I headed west for the Coast to take advantage of some rare, nice-weather days on the ocean. We made a quick stop at Devil’s Churn/Cape Perpetua to stretch our legs and make some lunch. The water was crashing quite dramatically on the rocky shoreline, and the barren rocks were awfully inviting for some exploration. We wandered carefully along the exposed rocks, watching the waves come in and keeping a safe distance. All sorts of tourists who’d just tumbled out of their cars for a quick walk were gathered at various spots near the water. It was not really our type of crowd, so we ate up and returned to the road. 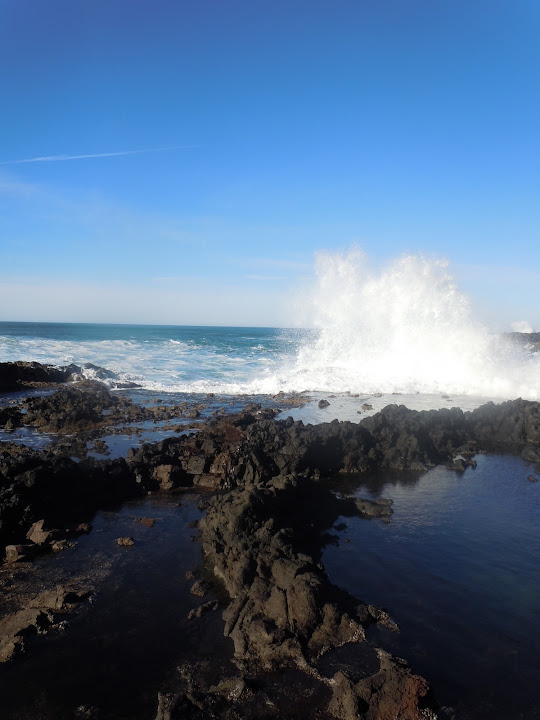 Next stop: downtown Florence. Here, we cruised through the art galleries and shops, hoping to find a spectacular bargain. But alas, no amazing deals or unique treasures grabbed our attention. Anyways, it was a decent way to kill an hour.

Onward to do what we’d come out here for: hiking! We had just enough time to run out to Carter Lake Dunes.

This 3 mile roundtrip hike with negligible elevation gain would be perfect for enjoying the last couple hours of daylight. We walked through the mellow, open sand dunes and into the coastal forest. I was somewhat surprised to find a section of flooded trail that we could not walk around without getting totally soaked. I remembered another trip to the dunes in which I had to take my socks and shoes off to complete a short section of trail just before reaching the beach. I figured this was just par for the course in the winter at the Oregon Coast. So, we took our socks and shoes off and splashed through the cold, cold water. 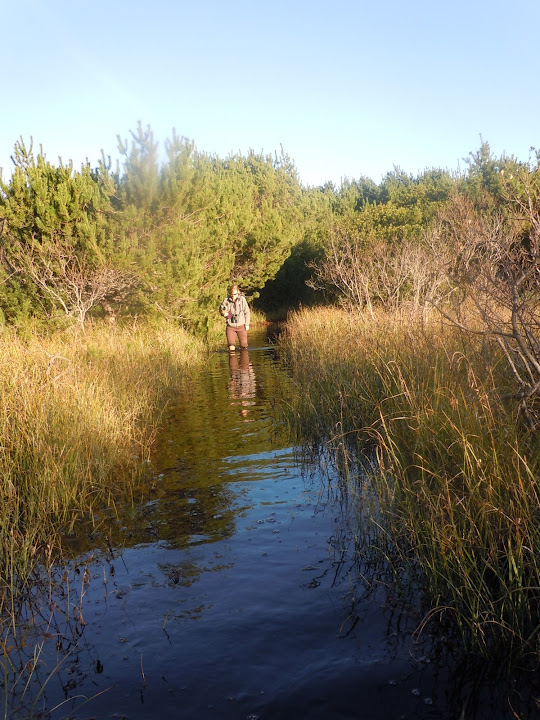 The difference between this trip and my previous trip was that the flooded trail section was quickly followed by another, and another… and then the water started getting deep.

It was so deep that we hiked our pants up as far as they could go–just above the knee–before they just couldn’t squeeze up over our thighs. By this point my feet and lower legs had gone completely numb, as if they’d been injected with Novocaine.

At last we reached the final sand hill that promised to lead us to the loud, vast ocean on the other side. Woo hoo! It was beautiful, and we had the place all to ourselves. Only an idiot would have come this far. Oh, I don’t know why Sue puts up with this stuff. 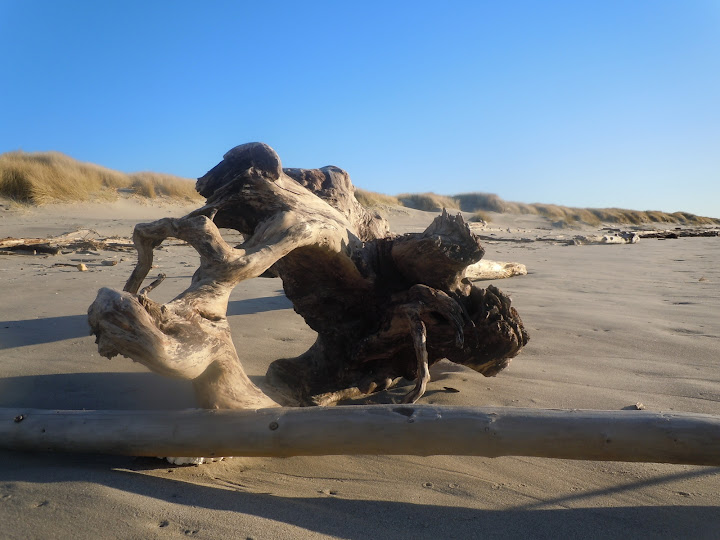 The sun was bright and warm. We kept our shoes off and traveled across the sand for as long as we could, dreading the return trip through the frigid water. On the way back we took our pants off for an easier crossing. It felt much shorter and less painful on the way back; perhaps our bodies were more prepared this time.

We camped at a state park campground that night. We were the only people there, save for the camp host. It was quiet and peaceful. We planned our dunes assault for the next day.

Today we thought we’d start out with a 6-mile loop that would take us through forest and dunes to an aptly named three-mile long lake. I’d done this hike before, but in the summertime. I really hoped we wouldn’t encounter high water today. 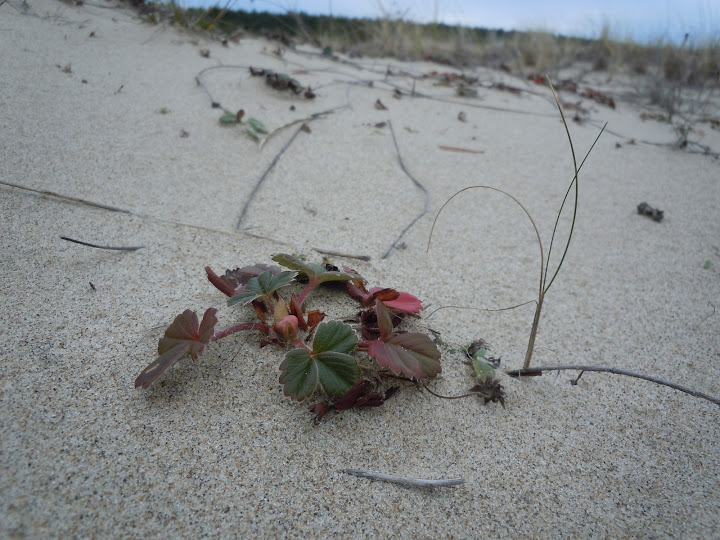 Our hike began after a leisurely breakfast and chat by the campfire. About 30 minutes of walking through the sand brought us to an enclosed path crowded by dense, coastal shrubbery. An odd, painted and carved sign on the path gave us a general overview of where we were relative to the Pacific Ocean, which we probably could have figured out on our own. From the sign, we followed the trail as it snaked through grassy dunes and thick, short trees. Eventually we began catching sight of the aforementioned ocean and many random user paths spidered out in all directions from the main trail. We followed what appeared to be the “right way” to the beach, but it abruptly dead-ended at the top of a sand cliff. 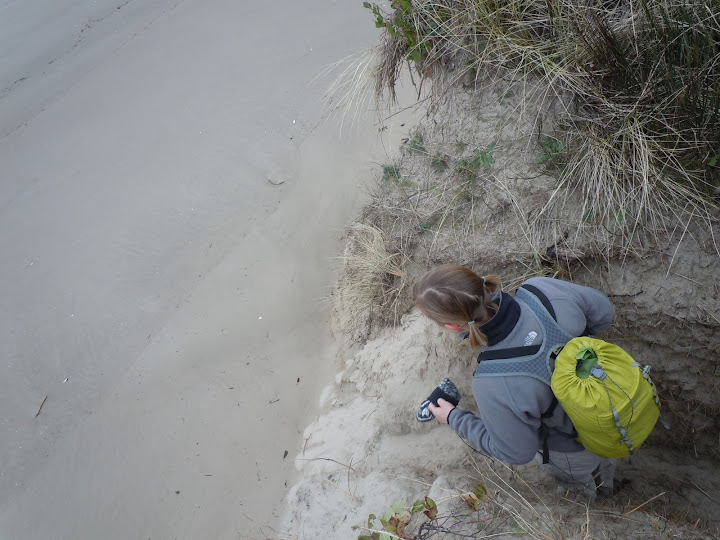 Much to my surprise, Sue pushed ahead of me and leaped, gazelle-like, down the vertical edge and landed in a crumpled pile on the sand. Sweet! I approached much more tentatively and dug my heels in to try and produce a softer landing. In the end it was much less death-defying than it looked from the top. I was sure glad we decided to do the loop in this direction instead of the other way around :).

We walked along the beach, watching the birds as they darted around the sand, avoiding the incoming, frothy waves and rushing out towards the water as each wave receded. But then the trail took us back across the dunes and low-growing plants towards Threemile Lake. It was here we sat down to enjoy lunch before finishing the loop. 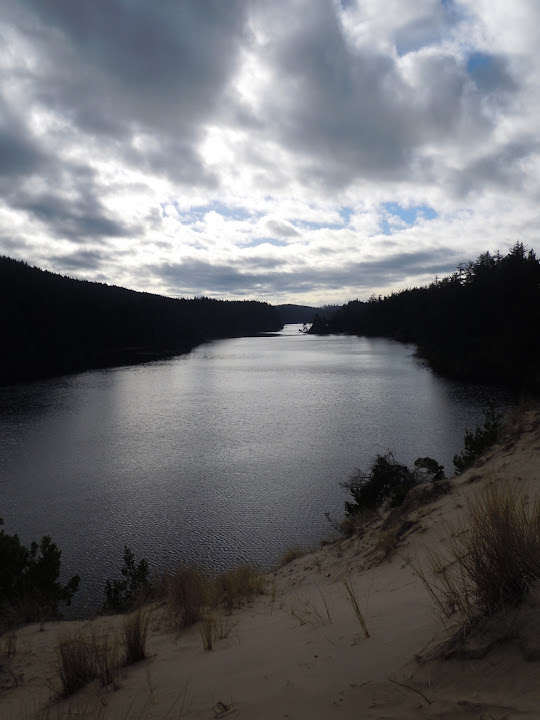 The only way to get to and from the lake was by going down a steep sand dune. There was hardly a nice place to sit at the lake, as the water came right up to the edge of the slope. But we were out of the wind and the view across the lake was pretty gorgeous.

The remainder of the trail was in the woods. The coastal forest was lush, green, and lovely. In some places, the trees competed for space with the sand dune, and a slow-motion battle was being waged between the green and the taupe. 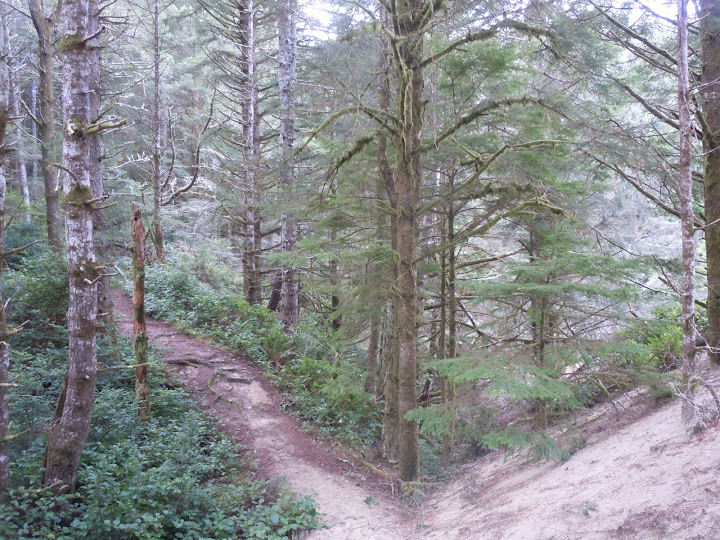 With half the day remaining, we hit 101 and headed to the Umpqua Dunes. I remembered these dunes as being really impressive, conjuring up images of vast deserts in faraway lands, like the Sahara desert, or a dramatic movie set at least. I was very excited to return, and curious what the water levels would be like on the trails near the beach.

For over a mile, we made our own path up and down the massive sand dunes, keeping the blue-painted posts far off to our right. The air was chilly today, and a steady breeze made sure we kept moving towards our destination. 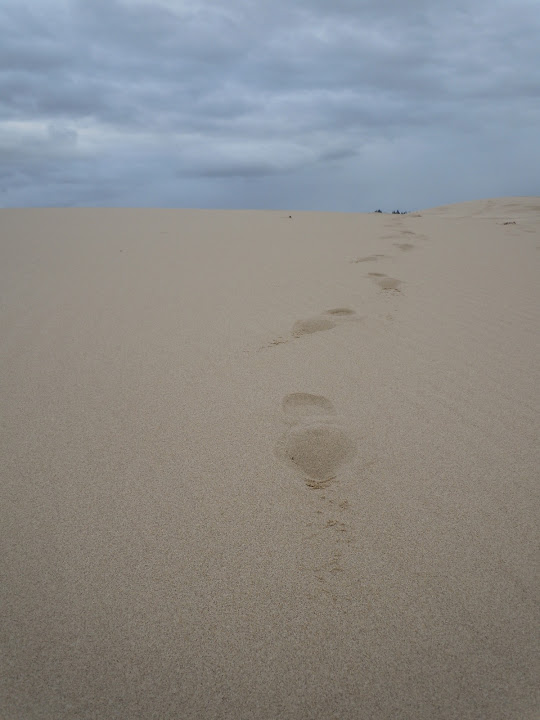 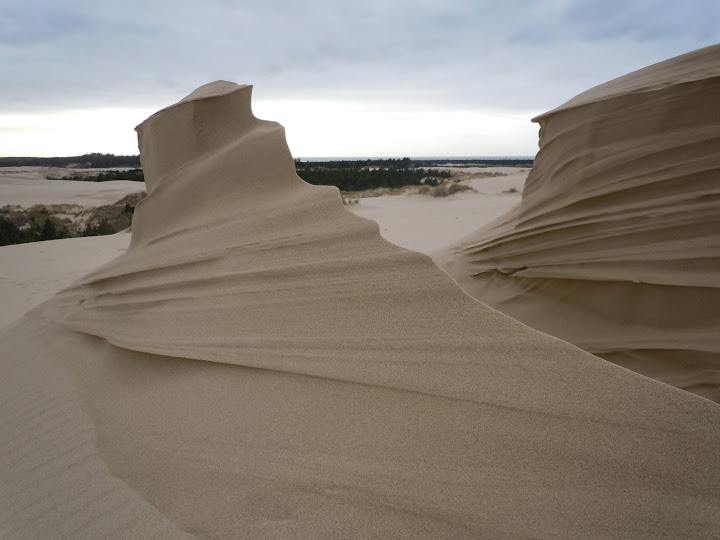 Once across the dunes, we picked up a trail that took an abrupt 90 degree turn to the right as it first paralleled the tree line, then made another abrupt turn towards the ocean. This trail was almost completely flooded. We walked alongside the trail for awhile, until it became impossible to avoid the high water, then did the inevitable: we took our shoes and socks off.

The water was shockingly cold and the trail seemed to go on forever. Fortunately, a nice boardwalk had been erected that kept our chilled toes out of the water. Then, it suddenly ended and launched us back underwater for a bit until we finally reached the sand. Ugh.

We looked cautiously up at the thick blanket of gray that had been closing in on us the whole afternoon. Just a tiny porthole of sunlight remained. I was sure we’d get rained on while walking back. 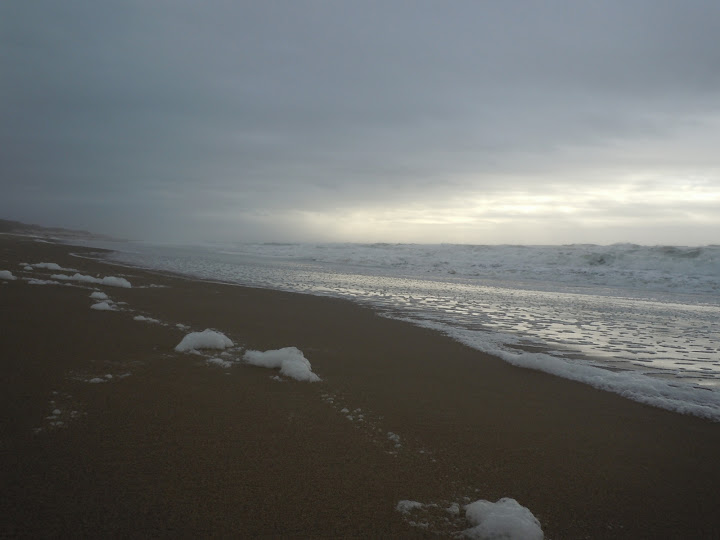 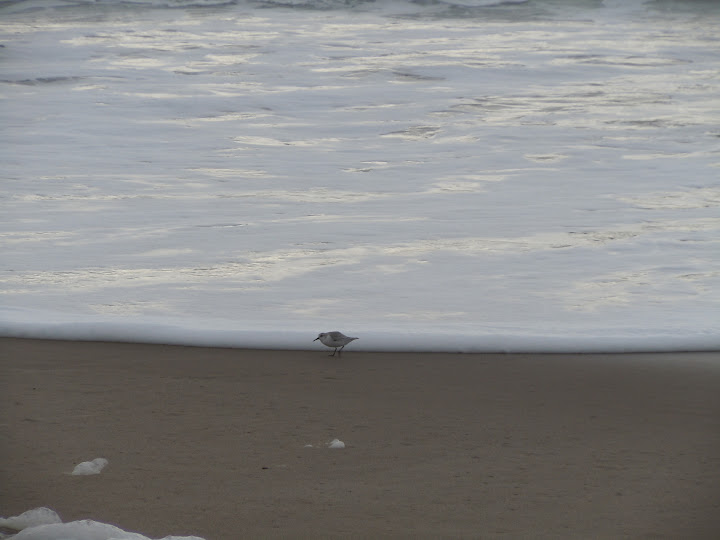 After exploring the beach, we retraced our path straight back to the dunes. At the 90 degree bend, we kept our shoes off and instead launched straight out into the sand dunes, angling towards the posts so we could retrace our steps back to the trailhead. Along the way I rescued a lost Swiss Army Knife. We explored some ponds, raced down some steep sand piles, and checked out the hardy plant life. The wind was really blowing now, as captured in this video.

We made it back to the car without feeling a drop of rain, but our camp was soaked all night long.

Before driving back to the valley, we made one last stop: Heceta Head. William Sullivan describes a 6-mile loop in the coast hiking book that stars from Washburne State Park; that was our plan for the morning. 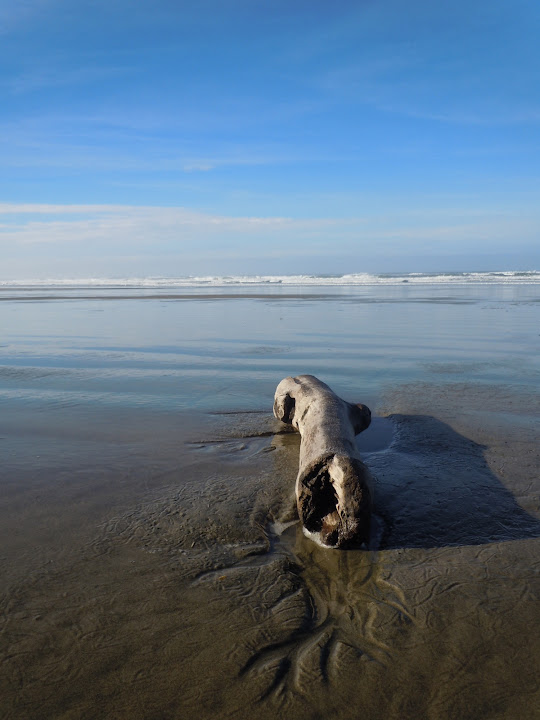 The start of the hike is a 1.5 mile or so walk along a wide, flat beach. We were in luck: it was t-shirt weather and the sun was shining extra brightly that day. There was even a patch of rocks corralling small tidepools that were teeming with life. We had to go check those out. 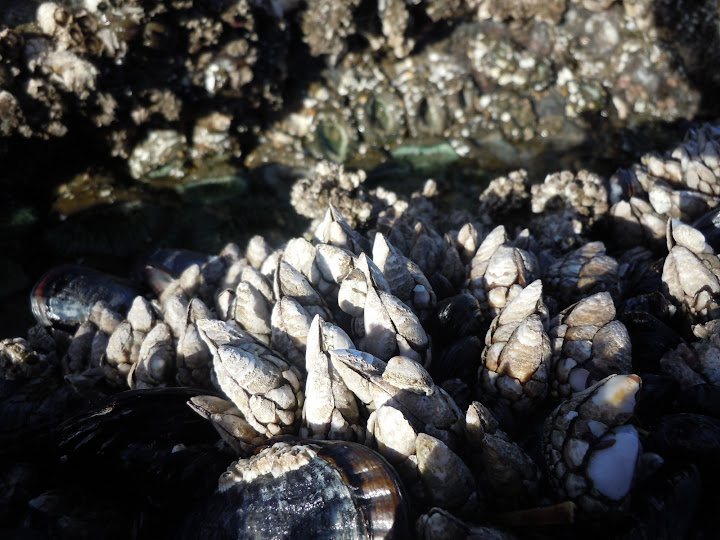 We ambled along, cowering in the intense sun, until we ducked into the woods and picked up the Hobbit Trail. This lovely trail rises a few hundred feet through a mystical coastal forest. Sun beams shone down through breaks in the canopy and sedge lined some sections of the muddy trail. We gawked at all the big trees as we slid and sloshed along in the mud. 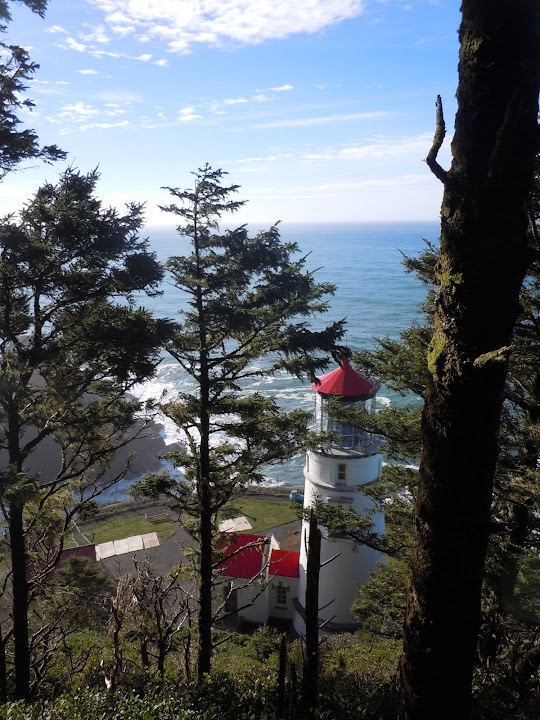 Once we reached the lighthouse, we had some snacks and talked to the park volunteer. The lighthouse was undergoing renovation so we couldn’t get very close to it. Reluctantly, we left the sun and walked back into the woods. It was a no-brainer: we wouldn’t finish the loop by completing the entire trail through the forest to get to the car. Instead, we retraced our steps on the Hobbit Trail to get another mile and a half of glorious, sunny beach walking.

It was a wonderful way to bring Winter Break to an end. The coast is a quiet and peaceful place to visit in the winter when most tourists don’t bother going, and those who do don’t stray more than a couple hundred yards from their cars and lattes. Thanks to Sue for helping to make this trip happen!