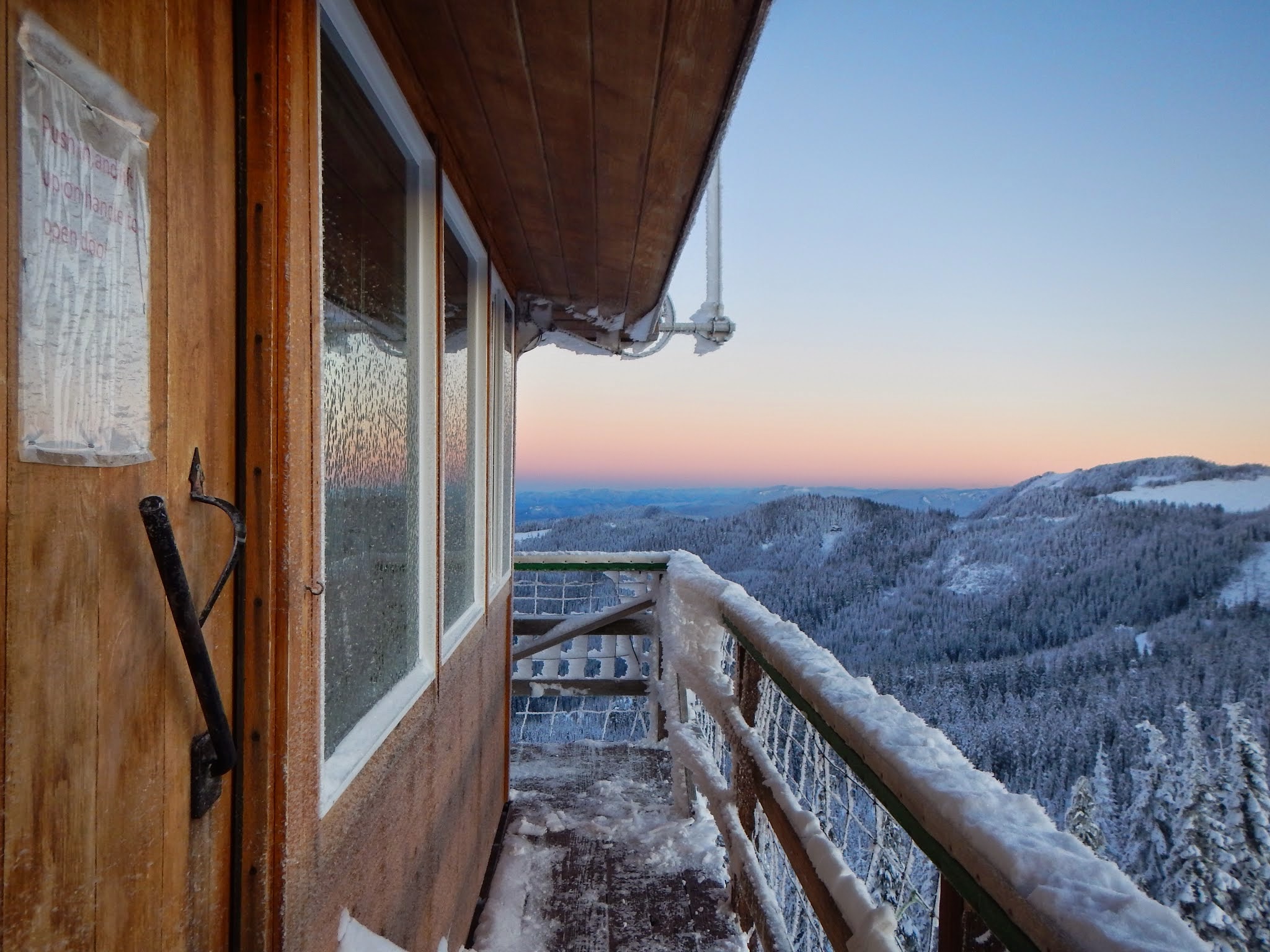 Renting a fire lookout for an overnight stay anywhere in the Northwest is next to impossible. Unless you are totally flexible with your stay or you can easily get anywhere mid-week, or the rental is in an inhospitable location. We banked on the last two items and luckily were able to snag a lookout for 2 consecutive nights in the Willamette National Forest.

My friends Sue and Scott joined Aaron and I for this winter vacation getaway. According to the Forest Service website, the snowshoe/ski to the lookout tower could be up to 10 miles long depending on road conditions. We counted on Scott’s truck to get us as close as possible to cut down the hike, but we prepared ourselves for an all-day slog.

Lucky for us, we charged up the gravel road in a lower-than-usual snowpack and parked within three miles of the tower. SWEET! That made it much easier to justify all the creature comforts I had in my pack. A box of wine. A gallon Ziplock bag packed with Cards against Humanity. And lots of tasty food. This was going to be awesome. 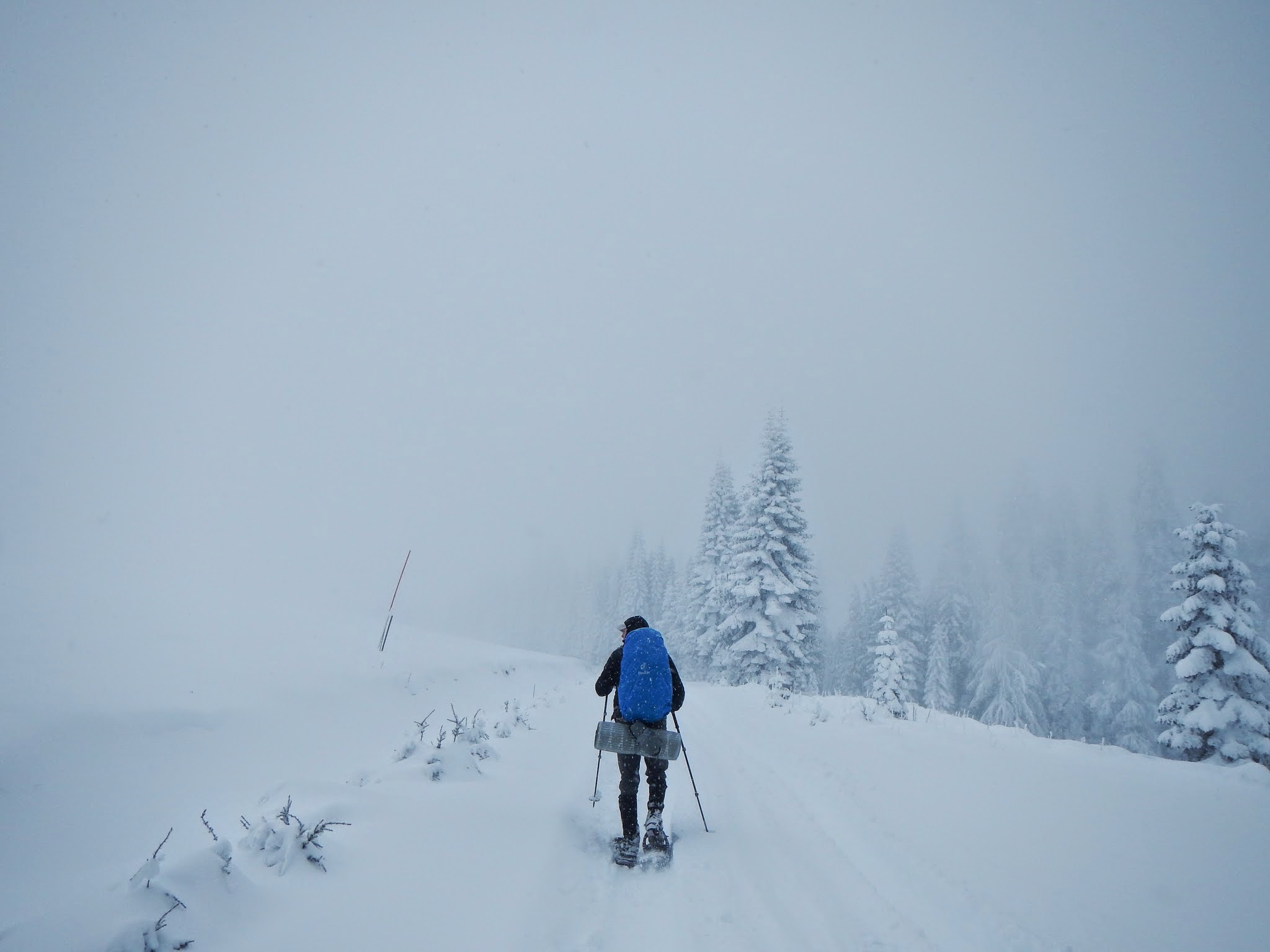 We walked up to the lookout tower in a thick cloud of white and gray. Each step felt very slow. We were all weighed down with gear. The trees around us were heavily laden with snow from recent snowfall. It was extremely cold and extremely pretty. The two often go hand and hand.

As the trees begin to thin, the clouds thickened and we were walking in a near white-out. But soon the tower came into view. It was encased in rime ice and wind-blown snow. Now all we had to do was walk up a few flights of stairs!

We left our snowshoes and skis at the base of the stairway and hauled our packs up. The ice was growing in delicate, feathery shapes all along the railings. 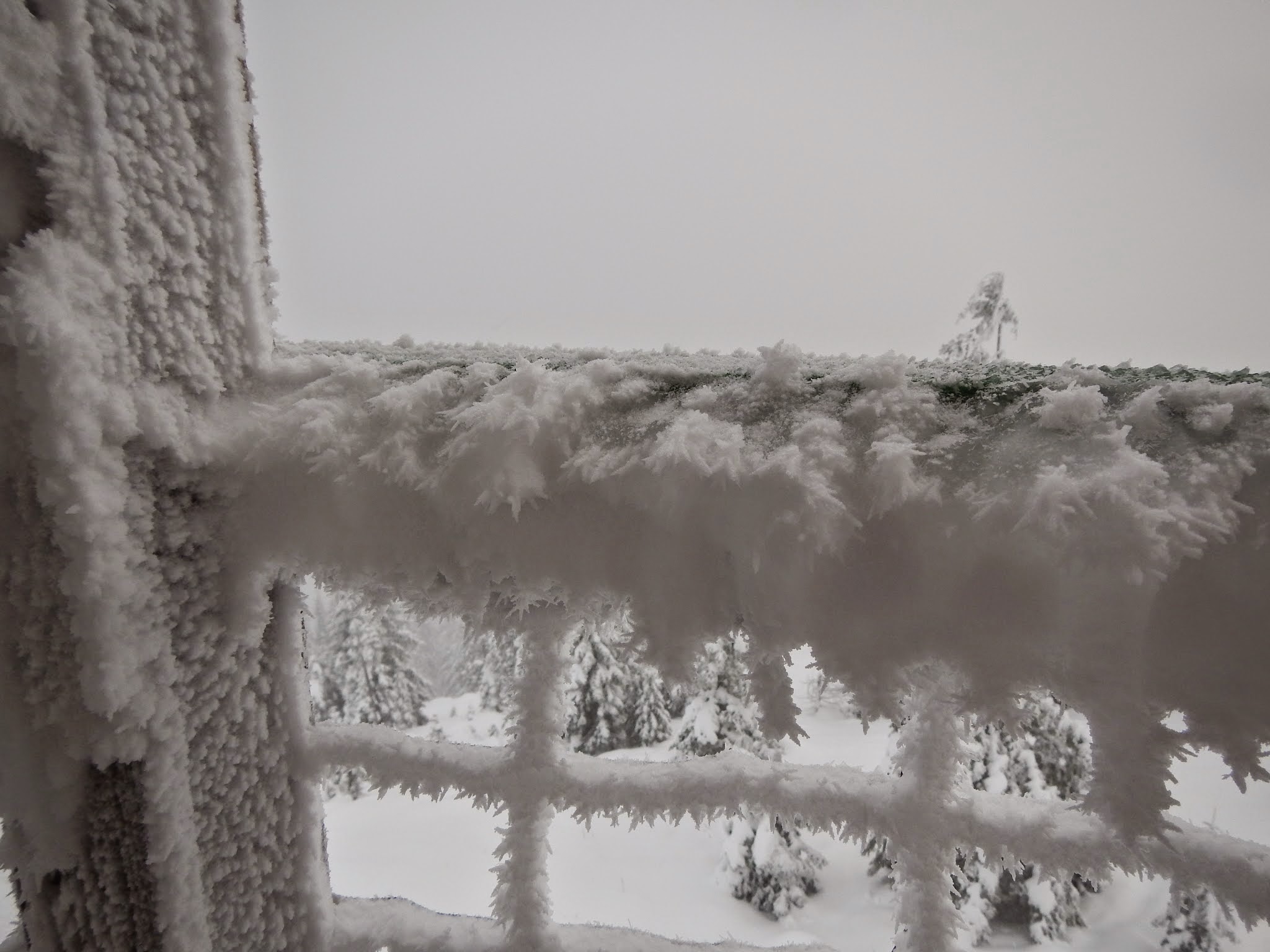 Inside, the accommodations were just what we needed. A small kitchen, wood stove, beds, tables and chairs. Hooks and clotheslines for hanging wet clothes. Puzzles and games. I was super excited to be here for the next two nights.

We spent the night drinking wine, playing games and eating snacks to fuel up for the following day’s adventures.

The next morning, we woke up to more epic cold. The panoramic views from our lookout perch were totally gray. We ate a casual breakfast and hung out for most of the day in our cozy clothes, drinking tea and making a jigsaw puzzle.

But as the afternoon rolled on three of us decided we needed to get out for a walk. After looking over the map and reading about previous visitors’ explorations in the log book we decided to take aim at Logger Butte.

It was after 2:30 pm when we started walking and we were still socked in. We walked along a snow-covered forest road, slowly but surely breaking trail. Within the hour, the clouds looked like they were starting to break. Shortly after that, we saw the sun. Yes, the sun! 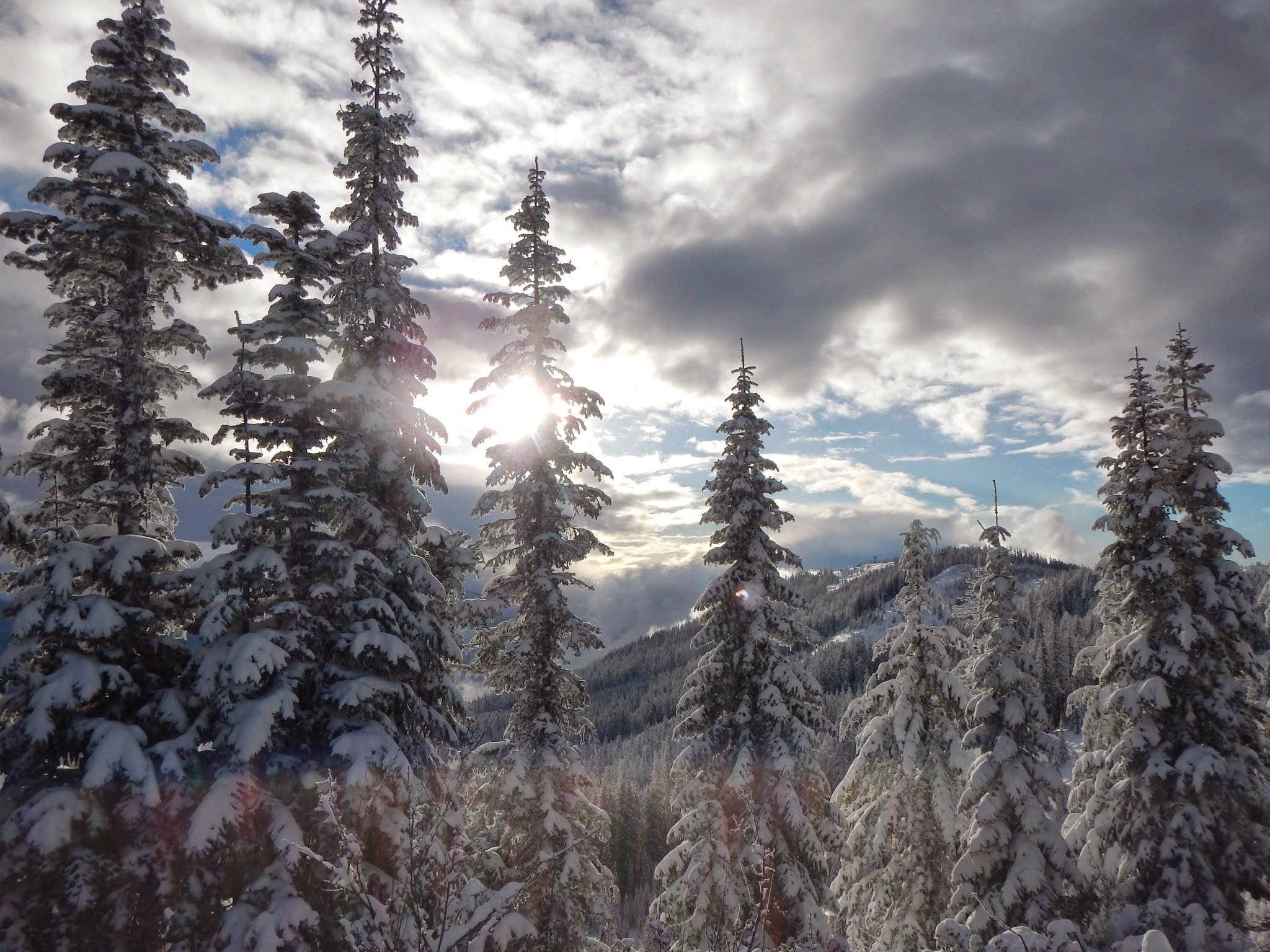 Suddenly the forest felt less claustrophobic. The sunshine made all the snow crystals sparkle. Icicles dripped down from rock outcrops. Trees parted to make way for views into the valley. Oh yes, this is why we wanted to come out here!

In a little under two hours, we’d reached the summit. There was a picnic table and a clear viewpoint from which we could see Warner Mountain Lookout Tower. We waved to Aaron from our snowy vista and let the sunlight hit our bare faces.

We hung out here as long as we could, knowing that sunset was going to come really fast.

We arrived back at the Lookout just before the sun crashed for the night and settled back into our cozy cabin.

The next morning we arose to a magnificent scene: Pink and orange painted the sky just above the horizon. Holy cow, we could see the horizon! The air was crisp, clear and brutally cold. We put on all our layers to go out on the deck and witness the beauty in which we found ourselves. Having been mostly socked in by clouds for the past two days, this was truly a treat.

The wind-carved snow slopes below us lay like an ocean wave frozen in time. In every direction, the sunlight brightened the snow-covered trees. Paradise.

Sadly we had to pack up our gear and begin the trek out. At least it was all downhill and the trail had already been laid. 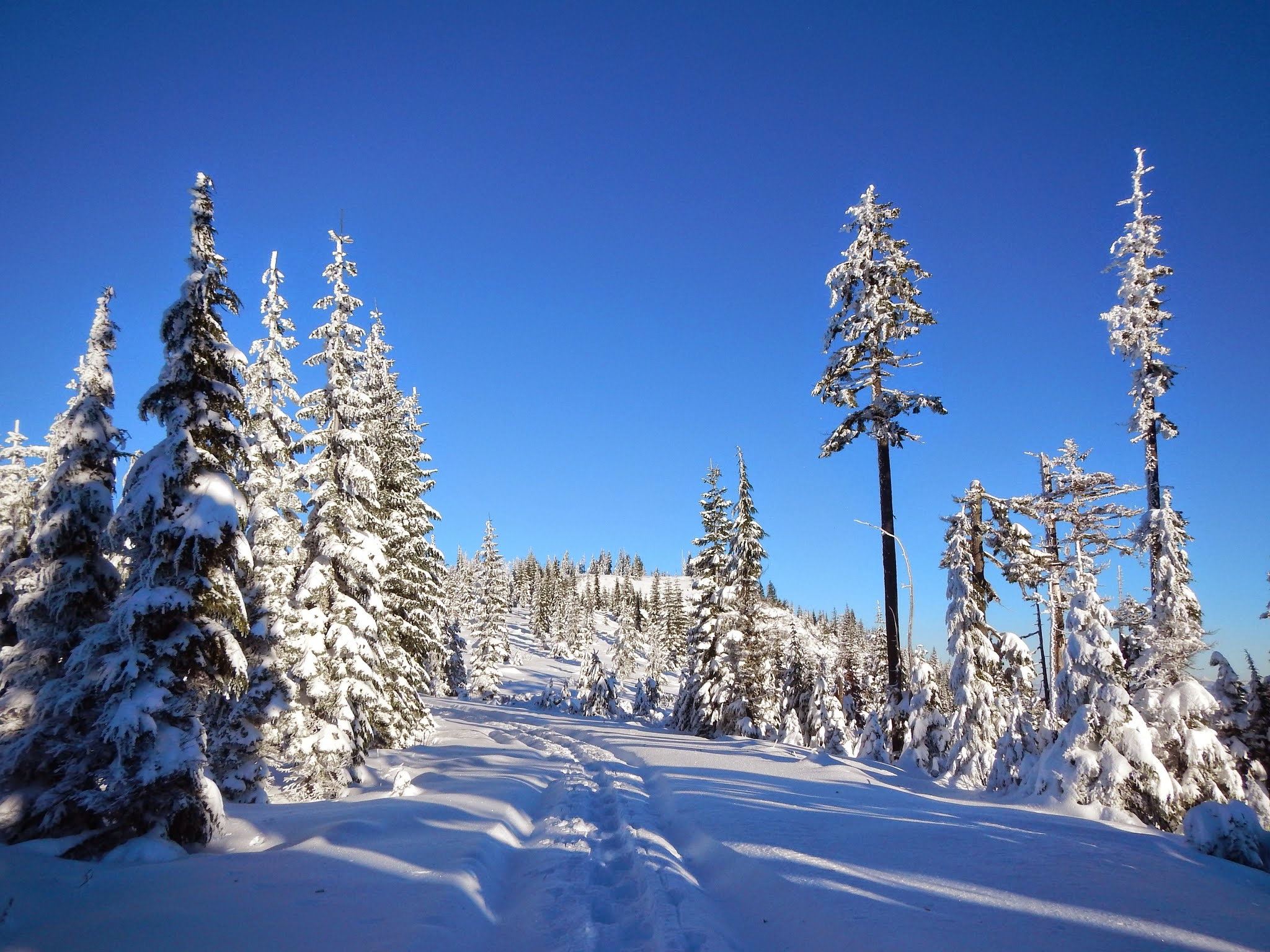 We marched through the cold in a single file line. Was it the bitter cold air or the surreal scenery that took my breath away? I couldn’t be sure. I was sure that this getaway was a great way to end the year: great friends, no WiFi and sweet nature all around me.

Back at the truck, we loaded up our gear and all piled in the back. Our weight helped to keep the vehicle from squirming all over the road. It was a fun ride down, and one of the unexpected highlights of the trip.

I wish the lookout tower reservation system was better, but I’m grateful for what I was able to get. I can see why these things are so popular. It’s too bad more of them aren’t tucked so far into the forest that most people can’t be bothered to trek out there 🙂